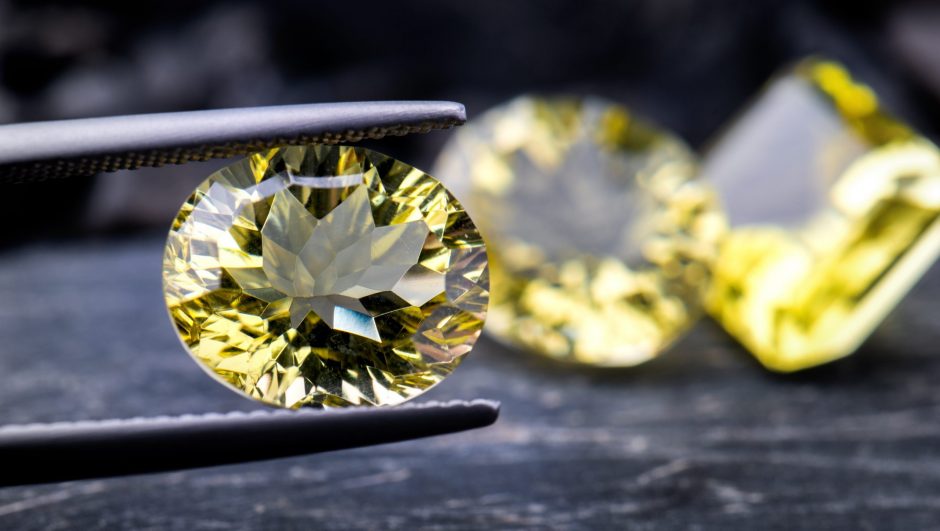 Yellow gemstones are amongst the most popular colors in the world, and the variety of stones on offer can be used in some truly beautiful pieces of jewellery. Just ask the royals!

In terms of color psychology, yellow is seen in many positive lights. This includes the feeling of starting afresh, feelings of happiness, loyalty, enlightenment and energy. In many cultures, yellow symbolises wealth, health and good luck. It’s also the most attention-grabbing color, which is why many road signs are fashioned in a bright shade of the hue.

To find out more about these sunshine-inspired yellow stones, join us as we look at the different kinds of yellow gemstones that have become sought after around the world. 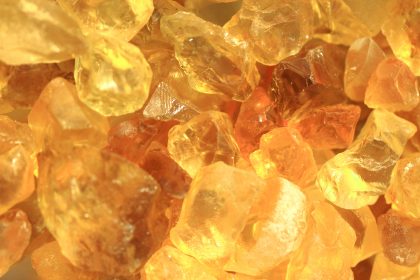 Citrine is another extremely popular yellow gemstone. It gets its name from the French word citron, which means lemon, and is known for its refreshingly light yellow-brown hue. Because of its striking colour, crystal healers have come to recognize citrine as a symbol of positivity, happiness and contentment. The gemstone is thought to be a healing gift from the sun due to its warm colour.

Citrine’s clarity is generally quite high and it rarely contains any visible impurities. The stone is incredibly transparent and durable, making it perfect to be used in jewelery. If the yellow gemstone is ever damaged, it can usually be replaced at quite a reasonable price, as it’s quite affordable.

In order to enhance its brilliance and shine, jewellers often ensure that citrine is faceted before incorporating it into a piece.

Due to its vibrant yellow color, citrine is named after the French word for lemon, “citron”. Throughout history, citrine has been prized for their warmth, beauty and brilliance. It is associated with sunshine and warmth, bringing hope and eliminating negative energies. Because it resonates with joy and positivity, citrine is also known as the vitamin C of the soul. 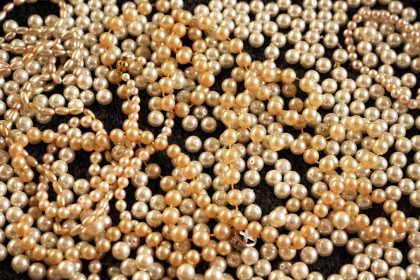 There is no denying the majesty of pearls – they are formed, often by chance, when an irritant such as a grain of sand works its way into certain species of oysters, clams and mussels. As a means of defence, molluscs secrete a fluid to coat the irritant. As this is repeated, layers are formed around the grain of sand or whatever it may be until a beautiful pearl is formed.

However, Golden South Sea Pearls are quite rare and as a result, expensive. These days, through the use of modern technology, heat treatments have been developed that can transform ordinary pearls into ones that look like Golden South Sea Pearls. These heat-treated pearls are far less expensive and are used in jewellery manufactured across the world.

As old wives’ tales go, pearls are not considered appropriate to wear at weddings. It’s said that these yellow gems can bring the couple bad luck. If a bride is gifted pearls on her wedding day, she should give the person who gave her the stones a penny as a means of protecting herself and her partner against any ill will. 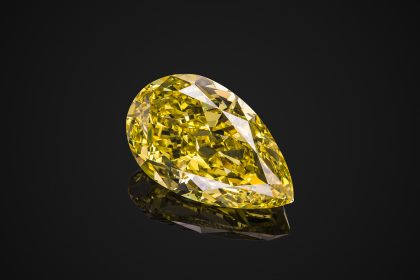 Yellow diamond is the most commonly found and most affordable of all colored diamonds. The yellow tinge on these diamonds is a result of traces of nitrogen being present as they were being formed.

It’s no secret that diamonds are prized possessions, and the yellow diamond is known for its brilliance, as well as the passion and fire that it represents. These precious yellow gemstones are excellent for use in jewelry such as rings, as they are incredibly durable. They’re also resistant to scratches and are very easy to take care of.

When it comes to yellow diamonds, the best colour for them is referred to as ‘Fancy Vivid.’ Most naturally-occurring yellow diamonds boast hints of a secondary colour, which can affect the value of the gem – brown tints will decrease its value, while green tints increase it.

Everyone loves diamonds, but traditionally, a diamond can be gifted as: 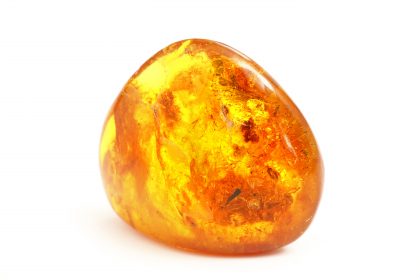 Amber is a unique gemstone because it’s not actually a stone, it’s a fossil gem. It’s famed for housing insects and other tiny creatures (remember the movie Jurassic Park?!). Amber starts off as tree sap and then takes over 30 million years to fossilise and become a gemstone.

Apart from occasionally having a fossilised creature preserved inside of it, this yellow gem is well known for its deep yellow hues that can be likened to honey. The deeper the hue, the more expensive the stone will be. Of course, the lighter the hue, the cheaper the price. However, as a whole, amber is still quite affordable.

While affordable, it’s almost impossible to harvest in large quantities. Generally, larger pieces of amber have been constructed by smaller pieces melted together. It’s also not uncommon for amber to undergo heat treatments to darken the hue.

Amber is not a birthstone but is commonly linked to Taurus, the zodiac sign for birthdays between 19 April and 20 May. This because Taurus’ zodiac element is earth, and amber is often sought after because of its earthy tones. Many people believe that the special properties of amber include improved eyesight and purer air quality. 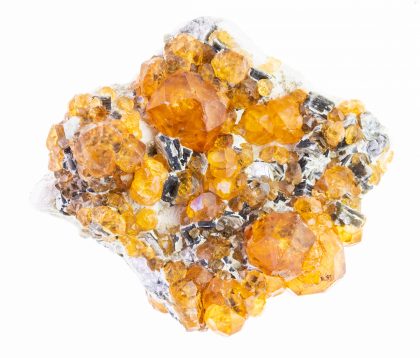 While garnets are typically associated with deep, red tones, they can be found in almost every colour of the rainbow. However, one of the most sought-after yellow gemstones is the garnet. Also known as Hessonite, yellow garnets come from the grossular branch of the garnet family and are most frequently yellow-hued.

Another, more spectacular yellow garnet is known as topazolite, which is a variant of the andradite branch of the garnet family. This gemstone has multiple dimensions, which makes it look as though it has a fire at the centre of it. However, topazolite is incredibly rare.

A third kind of yellow garnet exists and is known as a mali garnet. This gemstone is formed when a mixture of andradite and grossular chemistry occurs. Mali garnets are sought after for their high display of brilliance.

Jade is an incredibly popular gemstone and one that is highly valued in many cultures too. In Feng Shui, jade is believed to represent protection for the heart, nourishment and a sense of gentleness. While it’s most commonly found in a number of different shades of green, it’s not uncommon for naturally occurring jade to be found in yellow too.

Often referred to as ‘the enigmatic gem’, jade can be made of one of two minerals: nephrite or jadeite. Either of these can be yellow, although their properties are ever-so-slightly different. On one hand, nephrite is always opaque and can be found in large quantities. This is often used for the carving of statues. On the other hand, jadeite is famed for being more translucent. These pieces are often much smaller and more expensive.

Regardless of its composition, yellow jade stones are never valued as high as their greener counterparts. Stones made from both nephrite and jadeite are very tough – so much so that they can take the strike of a hammer without breaking.

For thousands of years, Chinese culture has seen jade as a symbol of wealth, good fortune, loyalty and friendship. The good luck stone is said to attract wisdom, long life and abundance. In terms of healing properties, yellow jade is said to help with poor digestion and improve blood circulation.

Other Yellow Gemstones Worth Noting

In the world of gemstones, yellow gemstones are aplenty. They make for an excellent addition to jewelry or a collection of precious stones.

Some other yellow gemstones worth mentioning include:

Although often found in blue, zircon comes in every colour including yellow. Zircon gemstones sparkle beautifully, which is why so many opt to use this stone instead of diamonds when creating special pieces of jewellery.

This yellow gemstone has been increasing in popularity, especially as a choice for engagement rings. The yellow sapphire comes in many shades from light yellow to a more magnificent golden yellow. While it is up to personal preference which shade of yellow you prefer, the more valuable yellow sapphire is brighter and purer in color.

The yellow tourmaline is considered one of the rarest types of tourmaline gemstone. This gemstone is also commonly known as verdalite and is the product of iron and titanium.

In terms of benefits of the yellow tourmaline, it is said to have properties to reduce neurotic tendencies and overcome problems in life. It can also neutralise the negative emotions in your life and accentuate the positive ones.

Easily confused with citrine, this gem is much rarer. It’s often a beautiful honey-yellow hue, with the occasional cat-eye now and then. Unfortunately, scapolite is very brittle and doesn’t do well in jewellery that requires durability, such as rings. Instead, jewellers advise that scapolite be used in low-impact jewellery like earrings.

Like many other gemstones, sphene can occur in several different colours, including yellow. This gemstone is a favourite amongst collectors, as it has a dispersion that’s higher than that of a diamond. However, sphene can be quite brittle and is not advised to form a part of your jewellery collection. As a display object, on the other hand, a sphene can easily outshine most other gemstones.

Yellow gemstones are like a little ray of sunshine, and it’s not surprising that the monarchy loves them! As you can see, if you feel like adding a splash of yellow to your jewellery collection, you have plenty of options!

Where To Buy Yellow Gemstones Online?

There are plenty of places to buy Yellow Gemstones Online online. From specialty online shops to online giants like Amazon.

If you’re interested in more than just yellow gems, have a look at the names, meanings and properties of different coloured gemstones: