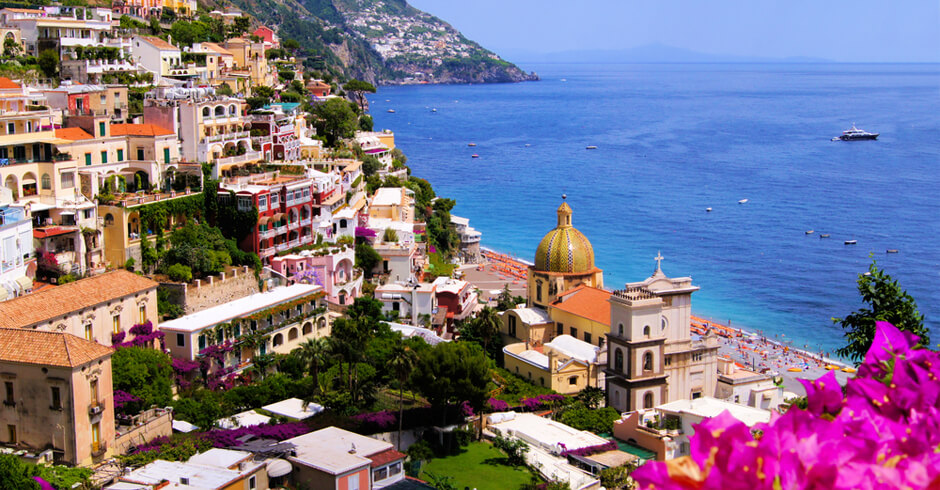 From the incredible 48 hairpin turns of Italy’s Stelvio Pass, to speeding within a hair’s width of crashing waterfalls and gushing geysers in New Zealand, there are some driving destinations that every motor enthusiast simply has to experience.

Explore some of the most spectacular driving routes in the world with us. We have carefully curated an enviable collection of driving breaks sure to entice and inspire.

Stretching 50km along the east of Italy, the Amalfi Coast is one of the most spectacular sites in the world. Jagged cliffs decorated with lemon groves tower above the sparkling sea, while dainty villas hang uncertainly from their edges. On the horizon the sea and sky merge into one dazzling ocean of blue.

From the picturesque town of Sorrento begins the famous SS 163 Amalfi tana – the Amalfi Road. If the incredible vistas aren’t enough, the route is also famous for a zigzagging route and hairpin turns, lending challenge to a daring driver.

Along the way are two jewels of the Amalfi ’s crown, the villages of Positano and Ravello. These colourful locations offer panoramic views of the coast and surrounding hills, with specialist shops caught in the tangle of prepossessing nooks and crannies.

Perfect Car: Maserati Granturismo. Touring the mountain roads surrounded by lemon groves and sea, this sporty Maserati is the perfect car and a true Italian icon. 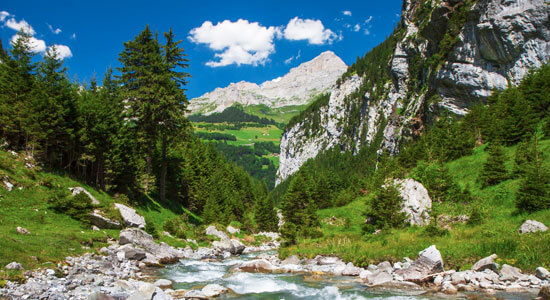 Switzerland’s Klausen Pass has been used for the purpose God surely intended ever since the invention of the automobile. The legendary Klausen Run mountain race began in 1922 after motor racing had begun to thrill audiences in England, France and Italy. The Swiss knew that no other mountain pass could compare with this enchanting 22.5km route that stretches between Uri and Glarus.

Today the event remains for vintage car enthusiasts, extending through the Schächten valley at high altitude. This route boasts 136 curves over an incline of 1237 metres, passing majestic mountains unique ora and fauna. The Klausen Pass will take you through the Alpine forests with views of jagged granite peaks that one might find hard to believe. The faint of heart beware though; the route back down offers some eye-watering sheer drops that need to be skillfully averted.

Perfect Car: Porsche 911 Turbo. If you’re not in possession of a true classic car, the Porsche 911 is your best bet as it handles magnificently across the speedy Klausen Pass. 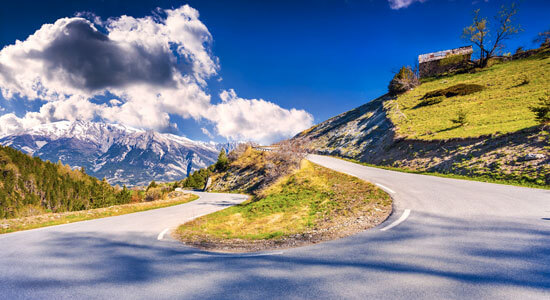 One of the most famous roads in the world, the Col de la Bonette is also Europe’s highest. Hitting heights of 2700 kilometres above sea level, the views of the Alps from the top are quite spectacular.

Showcase Cars: All About the Ferrari 458 Spider

The first thing that one notices when embarking on this epic journey is the superb quality of the road surface, which adds to the overall driving experience. The Col de la Bonette’s long, sweeping turns are a joy to take on. One of the finest pit stops en route is the postcard perfect town of Saint-Étienne de Tinée. Sitting low in the valley, beside the gushing Tinée river, this spot is surrounded by lush pine and mélèze forests, and towering mountain slopes.

As one ascends the higher reaches of the route, the striking contrast between the barren, volcanic expanses near the top of the pass and the lush greenery below will become more and more apparent. The road becomes increasingly complex as it climbs, the reward being the vast panoramic views at the top. Get your driving gloves ready.

Perfect Car: Lamborghini Gallardo Spyder. This racy Lambo is perfect for speeding to the summit of Europe’s highest road in style. 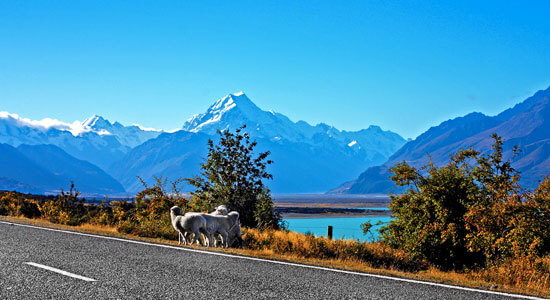 It was Rudyard Kipling that called New Zealand the eighth wonder of the world. And, driving through the lush green mountains that typify the country’s beauty, it would be very difficult to disagree. There are a great number of stunning routes to take in New Zealand. The green Bombay Hills showcase luscious farmland, while the volcanic terrain of Mamaku District provides an eye-opening drive. Volcanic cones also dot across the landscape towards Mount Ngongataha, a popular destination for luge riders.

Highway 5, linking Rotorua and Taupo, offers a variety of treats. Through thick sections of pine forest there are several turn-off spots, including the powerful Huka Falls where 220,000 litres of water crash into a pool below every second. The most awe-inspiring aspect of the journey, however, may be the towering Southern Alps mountain range that overlooks from the east. It runs through the entire South Island, the snow capped peaks reaching 3000m in height with multiple opportunities for admiring glimpses.

Perfect Car: Porsche 911 Carrera S. A sporty yet adaptable car, the Carrera S is great for exploring the mountainous terrain of New Zealand. 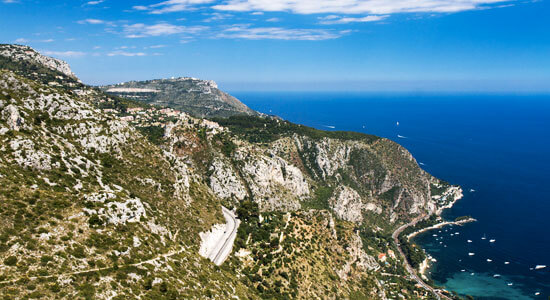 La Grande Corniche is just simply a masterpiece. Designed by the world’s first engineering school, L’École des Ponts et Chaussées, to assist Napoléon’s ambitious Italian campaign of 1796, the road originally clung to the cliff edge. Described by The Independent as “the world’s most romantic road”, views of lush, pastoral landscape and the magnificent blue sea below are incomparable. The highlight vista comes at a section between Eze and Nice, where one can see the jagged clifftops of the Alps, as well as beautiful sweeping views of the Maures Massif and St. Tropez to the west.

Often used in car adverts, this road sets a high example of the liberating prospects of motoring itself. Its seemingly impossible position carved into the cliff edge, and its enviably idyllic surroundings make the route an adventure in itself.

Perfect Car: Bentley Continental GT. The world’s most romantic road is surely befitting of one of the most romantic automobiles, a crown jewels in Bentley’s collection. 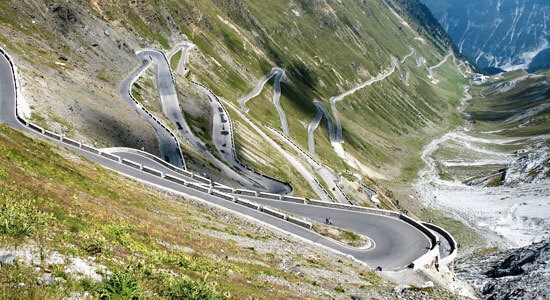 Crowned by Top Gear as the world’s best road, the Stelvio Pass is a labyrinth of twists and turns. With 48 hairpin turns, this route provides quite a challenge even to the Hamiltons and Alonsos of the world.

Located right by the border between Switzerland and Italy, the approach to the pass comes through beautiful Swiss countryside in Stelvio National Park, with picturesque stretches of Alpine forest. Once onto the pass, the budding Lewis Hamilton can measure their progress as each turn is numbered in sequence.

The road has an interesting history as well. Built in 1820 by the Austrian Empire, the route sought to connect Lombardia with the rest of Austria – a somewhat thankless task. Since its inception, it has changed very little, even in spite of fierce battles fought during World War I on the road itself. 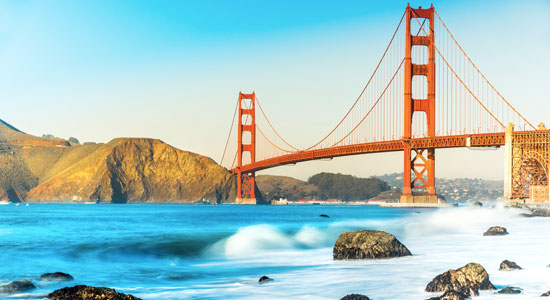 Route 66 may be the most famous road in the States, but it is Pacific Highway 101 which offers petrolheads the most thrilling route in the country. Winding down the west coast of America, the road begins in Washington state before entering California via San Francisco and the Golden Gate Bridge. An impressive entrance if ever there were one.

From here the route hugs the Pacific coastline, all the way past Los Angeles and into Orange County. This road offers sensational sea views. The 101 is known as El Camino Royal, The Royal Road, since it runs along the Californian coast linking the old Spanish missions, pueblos and presidios.

This road provides a patchwork of sights. From mountains that plunge into the sea to the more mellow landscapes of oak-studded hills, this iconic All-American Road has something for everyone.

Perfect Car: A Grand Tourer is a requirement on this route. An Aston Martin DB9 Volante, with its powerful 5.9-litre V12 engine, can handle chicanes just as well as it cruises.

Thailand – A Loop to Remember 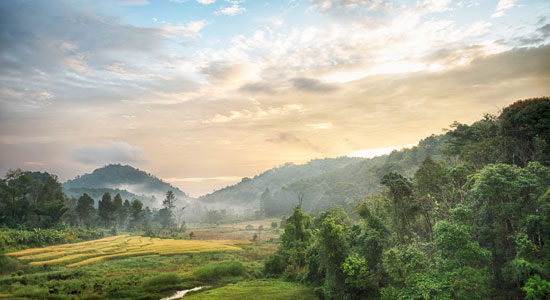 Two of the main highways in northern Thailand, Highway 108 and Highway 1095, meet each other in Mae Hong Son, and create a 600km loop. Now inventively named the Mae Hong Son loop, the route winds over incredible mountain scenery and through the provincial towns and farming valleys.

One of the highlights of the route is the first leg of the journey south, through Doi Inthanon national park. The twisting curves bring you out to see panoramic views of northern Thailand, into the Golden Triangle beyond.

Anyone who enjoys scenic waterfalls will be sure to find this route most enjoyable, since there are enough here to last a lifetime. On the northern leg of the route, sits the charming town of Pai. A popular tourist destination for Thais, the town is within close reach of natural geothermal spas and the ‘Pai Canyon’, set on high rock cliffs with narrow ridges that look over the valley below.

Perfect Car: Actually, this one is best explored by motorbike. With Thailand’s clement weather, a Harley Davidson offers a pleasant ride across the loop.

Go on a Panoramic Alpen Drive in Landau, Germany

If you are a bit of a romantic at heart, this two-day Wiesmann MF driving break for two, may catch your interest. Enjoy a three night stay, two in Munich and one in Lindau, and Michelin Star Dining. You will have a tasting menu dinner at Esszimmer in Munich and at Vilino in Landau.

You will have and itinerary personalised for you, with a map including restaurants and scenic stops. Remember there is no speed restrictions on the German Autobahn, it’s one of the top driving destinations of the world. Your classic car will take you through breathtaking views including Germany’s wine country, and Lindau’s “Garden of Eden,” on the banks of Lake Constance.

On the first day, enjoy your surroundings and visit the attractions of Munich. During your drive, you will be able to enjoy sites from the Alps to Danube plains. Remember to visit Neuschwanstein Castle of King Ludwig II. It inspired the vision of Snow White’s Castle and you can take a break from driving to ride in a horse-drawn carriage up to its door.

Get your Vroom on

There is nothing to lift the spirit like a good car, good friends and fantastic views. When you combine those three, you get a break to remember. What are you waiting for? It’s time to hit the road.