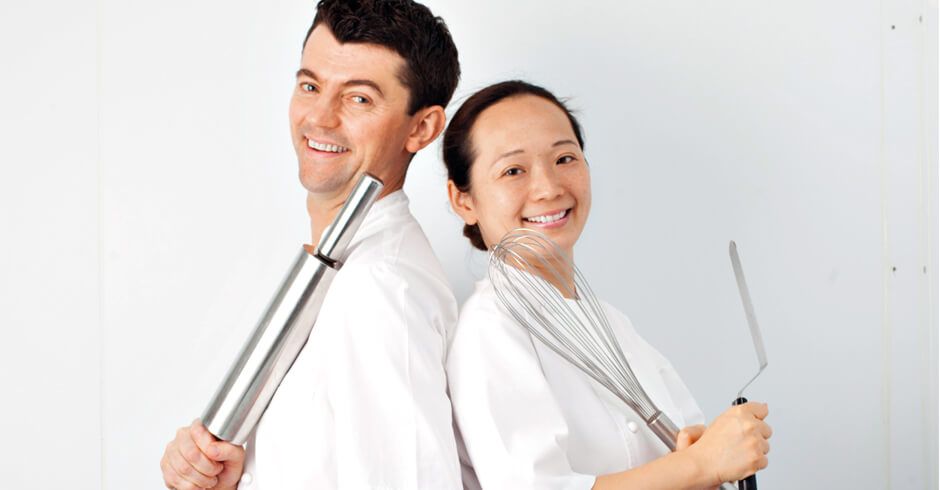 Back in the 1980s, two people, separated by thousands of miles, developed a fond love for the art of patisserie. One was on the east coast of Scotland, the other in the bustling city of Osaka, Japan. It would have been hard for anyone then to conceive that this pair would go on to be the husband-and-wife team behind one of the most celebrated patissier brands Britain has ever seen.

As I bite into one of William Curley’s most famous creations, the much talked about rosemary and olive oil chocolate, my tastebuds are treated to something that, quite frankly, I didn’t think I’d ever experience from chocolate. The piney essence of rosemary works well with the dark chocolate, while both flavours are enhanced by the milder olive oil. “It’s an old favourite now,” William tells me. “You launch something and it’s the next big thing, but maybe now it isn’t. Savoury and sweet are much more common now in chocolates; getting the palate to pick up those senses.”

Although William agrees that it is probably still the most famous of his chocolate creations, it doesn’t make it his favourite. “I love this one – it’s just pure Venezuelan dark chocolate. It comes from a single plantation there. It’s not even really a creation as such – I just take the ganache, take the cream, the butter, and really it’s all about the beauty of the Criollo chocolate; the flavour that it brings.”

Having been named Britain’s Best Chocolatier four times since the company’s inception in 2004, you might think William and Suzue Curley would be all about their innovative chocolate creations. “In all honesty, my passion is patisserie,” William tells me. “That’s what this is all about. And, as a patissier, chocolate is a part of that. I guess I don’t really look at chocolates in the same way as others do. I see more, I try to create, I try to layer.”

Suzue thinks along similar lines. “We’re both patissiers; that’s our passion and that’s how we met. But when we opened the boutique, I think we realised just having cakes and biscuits wouldn’t really suffice.”

With the UK’s long relationship with chocolate, they realised a specialist chocolate boutique was something that could capture Britons’ imaginations. Yet neither of them had actually ever created chocolate in and of its own before opening the store.

“Obviously we’d worked in restaurants, made desserts, but we’d never sold chocolate commercially before. So there was a whole learning exercise for us,” William says. “I guess we started off quite traditional with it and, over time, we began to develop more and more flavour.”

I put it to them that the rise from never having made chocolate commercially to being Britain’s Best Chocolatier must have taken some doing. “Well, chocolate is still very much part of what a patissier does and I think the UK eats about 9 or 10 kilos of the stuff per year, which is a lot of chocolate! So it just made sense.”

After all the acclaim for the variety of chocolates, William and Suzue are returning to their roots with a masterclass in the art of patisserie through their new dessert tasting menu. Five courses of patisserie delights, ranging from blackcurrant compote with basil ice cream to chocolate ganache on a hazelnut sable with pistachio ice cream, change monthly, guided by the creative inspiration of William and Suzue.

“The idea was for it to be a little like a sushi bar,” Suzue tells me, an homage perhaps to her Japanese roots. “We wanted the customer to be closer to the chef, which is why we have the counter seating. And even if someone is sitting elsewhere, they’re welcome to come across and interact with the chef. We really want to ensure the relationship is close.”

It’s clear that the dessert bar concept marks a welcome return to William and Suzue’s patisserie beginnings. But how on earth did they find their way from opposite ends of the world to opening one Belgravia boutique, one Richmond boutique and an outlet in Harrods?

“My parents owned an upmarket noodle bar in Osaka,” Suzue tells me, “And there I learned a lot about food. It was useful to learn about seasonality and different ingredients. We used to make rice cakes, and next door to our restaurant was a patisserie, and it was through this that I discovered my love for the art.

The Street Food Revolution - Our Meeting With Andy Bates

“My parents weren’t very pleased when I told them I was moving to Europe to learn more about patisserie. In Japan, it’s a really hard and competitive market – you’ve got to be very sharp to be successful there. My aim was to learn, then come back and start selling the French patisserie in my parents’ restaurant!”

As it was, Suzue headed to learn from the best at Le Cordon Bleu in London, before a stint at Claridge’s and then The Savoy. It was there that she and William first crossed paths. “He was practising for competitions at the time. I didn’t really say anything to him at first, maybe just ‘hi’. It was when I was leaving The Savoy that we got together. It naturally happened and, though he continued for a while, it wasn’t long before we started our own business together.”

“I felt I had reached the end of the road with working for someone. I’d come to London at a young age, worked with Pierre Koffmann at La Tante Claire, Raymond Blanc at Le Manoir, and Marco Pierre-White. So it was a good CV. But after I’d gone to The Savoy and been Head Chef Patissier there, I just felt I needed to do my own thing,” William says. 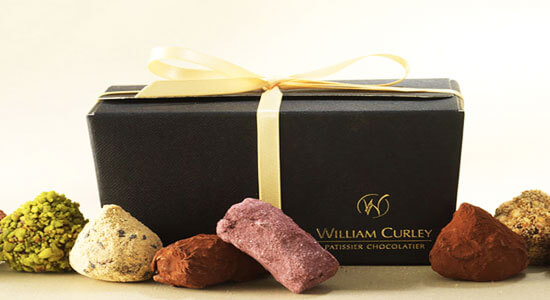 “William is very good with his hands,” Suzue tells me. “After he finished school he just needed to find something to do. So I guess it was either hairdressing or patisserie,” she jokes. I ask whether she could imagine William providing a great haircut. “I think so – he’s got that creative streak.” I tell her the refreshments would probably be a cut above too – the hot chocolate I’m given has that pure chocolate taste, combined with just the right creaminess.

11 years after the opening of the first William Curley boutique, and many awards later – including the Culinary Olympics in 2004 – the pair are excited about what the future holds. “The culinary scene here in London has evolved massively in the last decade,” William says. “I remember when I worked with Pierre, after finishing on a Friday I used to get the night bus from Victoria down to Paris.” We’re sitting in the Belgravia boutique, a ten minute stroll from the bus station. “I should probably go back there and see if it’s still running for nostalgic purposes,” he chuckles. “But when I got to Paris I would just spend a day there, walking about, looking at patisserie shops and getting inspiration. And I guess from a very young age I thought what they were doing in Paris was worth replicating over here.

“It’s a different market here, there’s no question about it – in France they’re more local with what they do, and having a patisserie on a Monday night isn’t seen as a bad thing. Their culture’s different, but, all across the food sector in London, it is changing. It’s pioneering: little delis, bakeries – the opportunities are here – there are a lot of people with a lot of money.”

“Yeah, the food scene here has improved so much,” Suzue agrees, “But still, with patisserie, I was in Belgium last week, and had 90 minutes of freedom after a meeting. I just went around, looking at the patisseries and the chocolate, and it was just amazing. The standards are so high.”

That shouldn’t undermine what is happening in London, however. “There are so many places here now,” William says. “Pollen Street Social is fantastic, Coya in Soho too. And what we’re trying to do with the dessert bar is bring patisserie to those same levels. You see them in New York, in Tokyo, but it’s just catching on here.”

It might only be catching on here, but the intricacies of what William and Suzue create suggest to me that it won’t take too long. The Japanese influence is clear – Japanese black vinegar, toasted sesame, apricot wasabi, yuzu, machas and green teas can all be seen in their creations, sitting alongside more traditional British ingredients like rosemary and thyme.

Before I leave, however, I’ve got one more question. Have those patisserie treats turned up in Suzue’s parents’ noodle bar? “Not yet…” Suzue tells me, with a wry smile.