Blog » Truly Happy » Scream Therapy: 5 Reasons Why Screaming Is Good for You 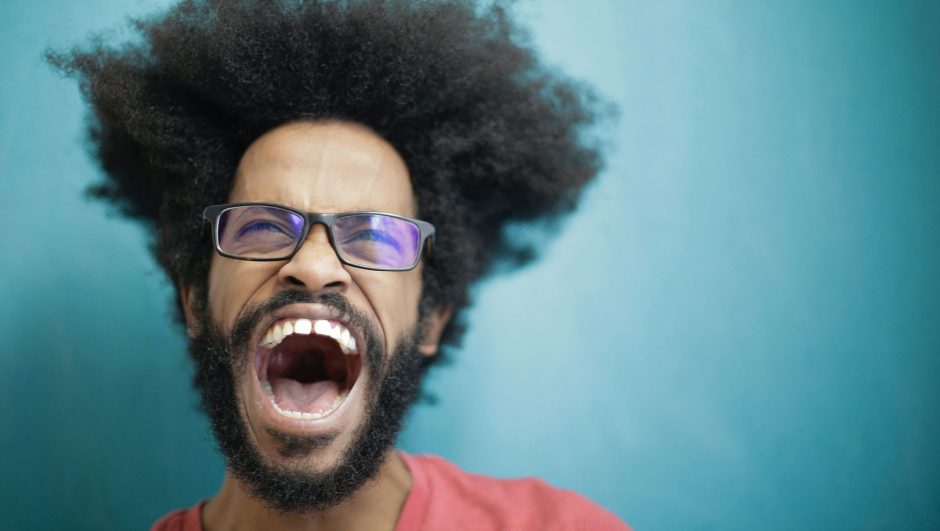 Whether it’s from stubbing your baby toe on a piece of furniture or pure frustration from your laptop freezing for the umpteenth time, we’ve all felt it—that deep burning desire to open your mouth and let out a long, bellowing scream.

Unfortunately, societal norms ask us to swallow our verbal frustrations and maintain composure. You might get some funny looks from strangers if you yell every time something doesn’t go your way.

However, there’s something seriously satisfying about shouting at the top of your lungs. Not only is it satisfying, but science has shown that screaming is good for you and your well-being.

Dont’ believe me? Before you start shouting at me in angry disbelief, have a look at these five facts on why shouting will do you good.

What is Primal Scream Therapy?

Primal scream therapy is what you might think – it involves standing in a warrior pose and screaming as loud as you possibly can. Scream therapy gives the patient a way to release anger and frustration or take the edge off of building feelings of anxiety.

“This modality of therapy is about connecting with the [negative] emotion, feeling it, and releasing it via screaming, sobbing, or even hitting a safe object such as a punching bag,” says psychotherapist Gin Love Thompson in an interview with SHAPE Magazine. “The physical vibratory sensations alert the nervous system and subconscious that this discharge is a conscious choice of absolution.”

Before you cancel your next therapist appointment in exchange for a screaming sesh at home, keep in mind that experts don’t recommend unsupervised scream therapy. You’ll need an experienced psychologist to guide you through a holistic treatment plan to get those anxiety-busting benefits from this primal scream therapy tactic.

Shouting is an ancient form of Chinese medicine

It’s not just hip-hop stars and psychologists who claim shouting is good for you. Ancient Chinese wisdom also says that letting out a loud yell is beneficial to your health.

Every morning, Mrs He, a 60-year-old woman from Hangzhou, and her friends climb to the top of a hill and let out some loud shouts before starting their daily exercise regime. She told CNN, “Chinese people have passed on the practice from generation to generation as a part of traditional medicine. My parents taught me. It’s a part of our folk culture.”

As well as being a bit of fun, there’s a reason for her morning routine. Traditional Chinese Medicine (TMC) focuses on the energy and rhythms of specific areas — and organs — of the body. It believes that yelling is good exercise for your lungs and liver.

According to Dr Nan Lu, a master herbalist and Qigong master, the energy that feeds the liver’s well-being needs to flow, but it can get obstructed by frustration. The remedy? Shake like a noisy tree. To do the Tree Shake, stand nice and tall, then swoop your body down toward the floor and come up swinging like a tree in the wind. As you shake, reach your fingertips toward the sky, gather up all your frustration and release it with a whopping scream.

It might be a good idea to let your neighbours know you’ll be making some noise shaking like a tree, so they don’t think you’re barking mad.

Shouting Can Relieve Stress (But Stress Out Others)

If you’ve ever shouted at someone, you’ll know that vocalising your internal tension can be a powerful, therapeutic verbal release. That burning desire you have to scream when you’re angry is natural – and stifling that impulse isn’t very healthy.

While it might feel great to you, keep in mind that your scream could have negative effects on the people who hear it. Laboratory research has shown that the rough sounds of human screams activate fear responses deep in the minds of people who listen to them. If you’ve ever heard screaming coming from the distance for an unknown reason, you’ll know how scary it is.

So instead of screaming your lungs out and having someone call the police, try screaming into a pillow. Or better yet, let in out into The Scream Box. This hand-held box has a foam that absorbs sound waves and reduces the noise by 90%.

Shouting Can Increase Your Strength

If you hate the sound of bodybuilders grunting loudly at the gym, there may be more to their noise than attracting hot girls’ attention. According to research, a quick yell or grunt before an exercise can increase your strength.

Researchers from Iowa State University measured the handgrip strength of martial artists using and not using the kiap or “battle cry”. The technique involves the short shout made when performing an attacking move. The study found that the participants’ handgrip strength increased by about 7% when they did a kiap compared to when they didn’t.

Similar studies found that grunting from tennis players helped them maintain strong and put more force behind their shot. Forcefully expelling air in the form of a quick yell or grunt may help stabilise your core and have the same effect on force production and strength.

Also see  Measuring Happiness: Is It Possible and How Can It Be Done?

It may be unconventional, but you might want to try grunting like a beast if you’re trying to beat your personal best at the gym.

Have you ever screamed as loud as you can underwater? Or shouted from the top of a mountain, banging your chest King Kong style? If you have, you’ll know how bloody fantastic it feels.

Besides having a cathartic effect, shouting feels really good. When we shout, our body releases “feel good” chemicals that we all crave.

Dr Peter Calafiura, an American psychiatrist, says, “Yelling might trigger some endorphins, a natural high. They might feel calm, and it might even be a little addictive. It’s really similar to a runner’s high. They’re getting the same effect in a different way.”

So next time you feel the urge to let out a scream, head to the mountains or grab your pillow, and let it out. It’ll do you more good to vocalise that built-up tension than to keep it stifled up inside.

As Shrek wisely said, better out than in.

Whether it is scream therapy or simply screaming, we believe it can be good for your mental health. Happy screaming!