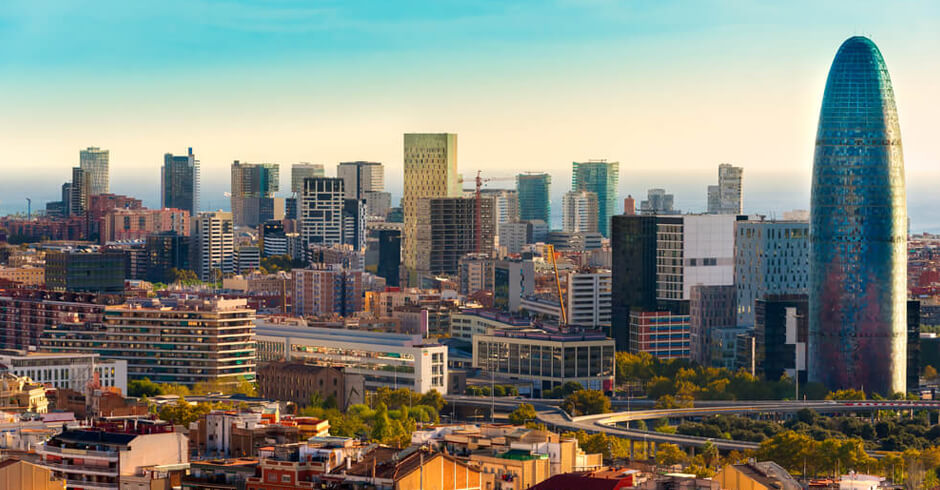 Despite it being one of the most popular tourist destinations in Europe, third only to London and Paris, Barcelona is a rare breed. The older part of town, a delight to explore, is a labyrinth of cobbled streets and narrow alleyways punctuated with shops selling stuff you never needed but might quite like to have anyway. The newer part of town, hardly lacking in charm itself, stretches down to the beach – the soft sand of which a welcome to weary feet.

The best way to see Barcelona will always be by foot, though there are a couple of bicycle hires in town if you fancy a two-wheeled cruise down to the promenade by the beach. The ‘bicing’ red and white bicycles are ostensibly an attractive proposition, but unfortunately these are reserved for residents only.

Remarkably the traffic is next to none – rarely will you see cars stacked up at a junction. In a similar way to New York, many of the streets are in blocks, and navigating by map couldn’t be any easier. Trams also run straight down the middle of the city. Buses conveniently service the town from the airport and back for a small fee. We should also mention the metro that is, in contrast to the Tube, as spacious as it is efficient.

If there’s one food synonymous with Spanish cuisine, it’s tapas. The Spanish find it very difficult to make bad tapas. When accompanied with a glass of sangria, there’s little that can make you feel more like a local. The town also has its fair share of ice cream parlours, which are more inventive with their flavours than run of the mill vendors.

If you’re feeling somewhat extravagant, there’s the immaculate and wonderfully grand 7 Portes situated right on the harbour front. For classic tapas with a twist, Tickets provides some of the best around, though one might have a spot of bother trying to book a table. Alternatively, Mediterranean joint Pla is a more accessible, refined, rand relaxed restaurant with plenty of romantic and historical nuances about it. Our pick though would have to be Tapas 24, located just off Passeig de Gracia .

There’s little not to like about the Hotel Neri, especially when you realise its next-door neighbour is the city cathedral. While beautifully gothic in nature, the bold colours of the rooms complement the aesthetic.

Then there’s the Ritz-Carlton at the Hotel Arts, which does no such thing as a room without a view. 44-storeys high and situated on the seafront, Hotel Arts either gives you a godlike vista out to sea or onto the city below.

Mandarin Oriental’s Catalonian branch has the virtue of sharing a street with Gaudi’s Casa Batlló. Not only that, it possesses an elegant rooftop plunge pool, a Michelin 2-star kitchen, and one of the brightest and most elegant interiors in town.

Montjuïc is an elevated part of the city that, by no coincidence, provides the best views of the town. A cable car runs to and from Montjuïc and the harbour, but those not confident with heights are advised to avoid. Just beware – when you’re at the top of the hill, you might regret not bringing your camera.

Various examples of Gaudi’s endeavours pepper the city, the most prominent one being the famous Sagrada Familia, a grandiose and ancient-looking balistica almost as tall as the hills in the distance. (We advise you purchase tickets in advance, as there’s never not a queue). Also worth a visit is the Catedral de Barcelona, an imposing structure from the outside but a palace of peace on the inside.

To name a few other attractions, there’s the Nou Camp for visiting football fans, Gaudi’s vibrant but tranquil Parc Guell, and the vast collection of Pablo Picasso’s former work in the Museu Picasso.

There are few pleasures that top simply roaming, not too different to how they were 1,000 years ago, the streets of the Old Town. If it’s warm out, a stroll along the coast is a delight, though the beach isn’t to be ignored in the winter either – especially if you’re a Brit more accustomed to Bournemouth in summer.

Traditional yacht excursions are available from the harbour for those looking to experience the sea breeze. Various parks dot the city and are just what the doctor ordered for a post-dinner stroll, the most attractive of which arguably being Parc de la Ciutadella. While Les Rambles is rarely anything short of a hive of activity at the heart of town, the better bars tend to be frequented by locals off the beaten track. In short, the more you explore, the more your efforts will be rewarded.