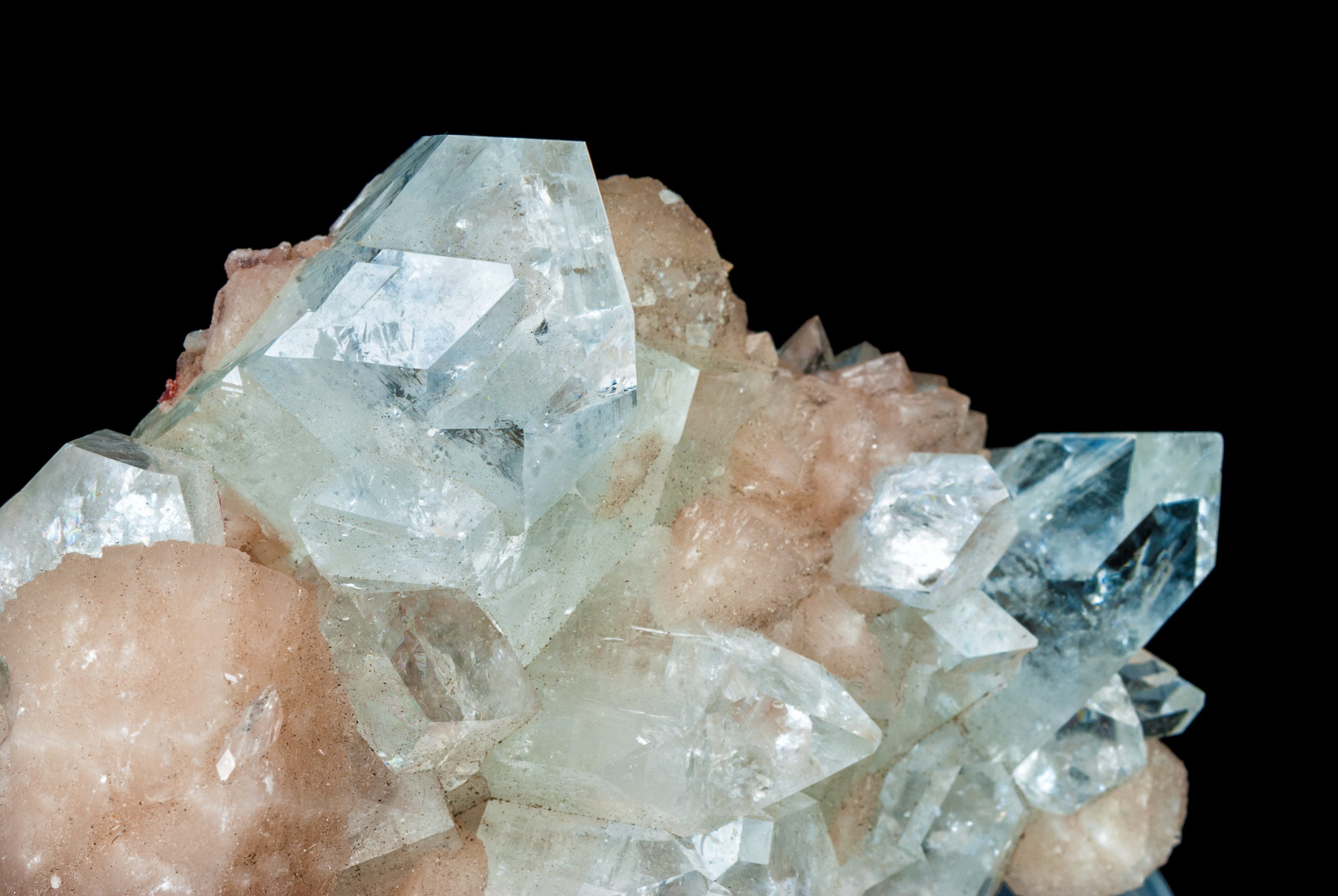 Apophyllite is a striking group of crystals that come in a variation of colors. The shape and layout of these crystals look like many pyramid-like prisms stacked on top of and around one another.

The apophyllite crystal structure consists of many layers, this is what gives it its pearly sheen and unique shape. It has a fascinating history and many unexpected uses.

It is said to be a crystal that raises your vibration and assists your masculine and feminine energies in finding balance and harmony with each other. Apophyllite is a highly intuitive stone and is often used to increase awareness and ignite your intuition.

Join us as we find out more about this unique group of crystals. 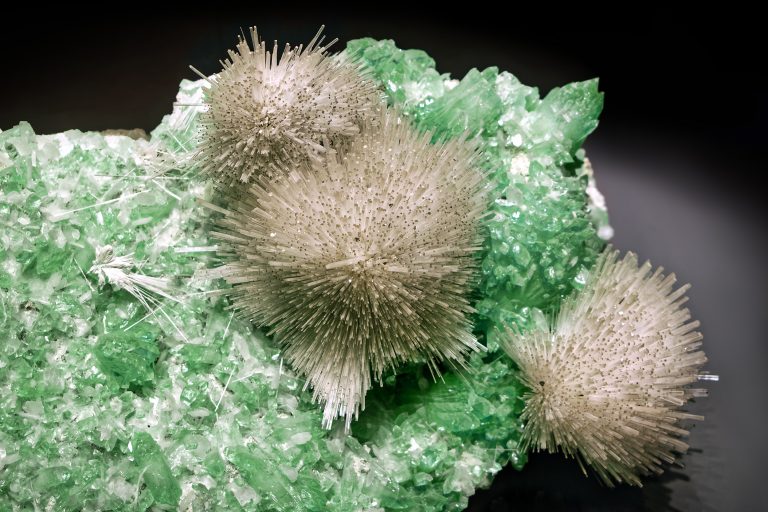 Apophyllite was first discovered between the 18th and 19th century by Rene Just Hauy. They are often found in the mines of India, Brazil, Italy, Greenland and Canada. The most sought after beauties in this group of crystals are said to be the green stones and hail from Poona in India.

All types of apophyllite crystals have a similar chemical structure and share similar properties. What sets them apart from each other is their variation of shape, color and origin.

What Is The Meaning Of Apophyllite?

The name, apophyllite, comes from the Greek word ἀποφυλλίζω or “apophylliso”, which directly translates to “it flakes off”. The name also refers to a specific group of silicate minerals that make up approximately 90% of the earth’s crust.

They are well known for clearing negative energy and bringing about a sense of calm and peacefulness, even in the most stressful situations.

Benefits And Healing Properties Of Apophyllite

There are numerous benefits of these incredible crystals. They are known to be a powerful way to become spiritually uplifted and bring a sense of oneness to their owner. It is said that apophyllite crystals can cleanse your auric field and manifest intense clearing of negativity in your body. It can send pure light energy and high vibrational cleansing pulsing through you.

If you are someone who is struggling with energy blocks, negative energy in your home or workplace, stress, anxiety or feelings of overwhelm then we highly recommend apophyllite.

Apophyllite is also said to connect you with your angels and guides, bringing you ever closer to the angelic realm.

On a physical level, apophyllite can help clear and heal respiratory problems and relieve symptoms of allergies too. It is also known to heal skin rashes and reverse symptoms of fatigue and exhaustion. In today’s fast-paced stressful society, this stone is one we should all be carrying around.

What Chakra Is Apophyllite?

There is some debate among the seasoned crystal collector as to which chakra apophyllite is associated with. There are three potential options, it is up to the user which one of these feels in alignment with you.

Apophyllite is said to assist with increasing and enhancing psychic vision and clairvoyant abilities. Thus one of the chakras that it is associated with is the third eye chakra. The crown chakra is one of the other chakras said to be directly affected by apophyllite, being so close to the third eye it is no wonder that both of these similar energy centres can be assisted and cleared by this stone.

Last but not least, we have the heart chakra. Apophyllite’s ability to bring clarity, calmness and peacefulness rests gently in the loving embrace of the heart chakra and can help bring openness to a blocked or sad heart space.

How To Use Apophyllite?

Apophyllite crystals are fantastic to use during meditation. Due to its highly intuitive enhancing ability, it can open your upper three chakras up connecting you to your higher self and angelic awareness. Rest a small apophyllite stone on your third eye (located between your eyebrows) whilst meditating or having a massage and allow it to do its job.

Another way to utilise apophyllite is to wear it around your neck as a necklace. If you are wanting to use this stone to heal any issues in your lungs on a physical level then keeping it close to that area will benefit you greatly. Keeping around that general area will also assist in opening up and clearing your heart chakra.

Where To Place Apophyllite In The House?

Let’s take a moment to consider apophyllite’s incredible ability to clear, cleanse and bring light into our lives. Bringing apophyllite into your home not only does the same thing but will bring your home closer to the angelic realm and bring an overall sense of calm into your space.

Place apophyllite in dark corners, places where you feel the energy might be stuck or a bit negative and at the head of your bed to enhance spiritual awareness while you sleep.

What Colors Does Apophyllite Come In?

Apophyllite comes in a few different colors but its most common color make-up is white. It also comes in shades of pink, green, yellow, brown, and is sometimes even totally colorless or transparent.

Other less common colors are shocking-white, off-white/grey, and rose-red shades. The rarest and most unusual color to find in the apophyllite family is black. This black coloration is caused by inclusions of other minerals, an example of this would be Hematite.

The simple answer to this question is no, apophyllite crystals are not rare.

However, as we discovered above, there are some of the color variations of this family of crystals that are considered very rare and hard to come by. There is some debate as to what the rarest kind of apophyllite is, but we can definitely say that green and black are the top two on that strongly debated list.

The commonly occurring form of apophyllite is the clear or white kind, it is not difficult to come by and not very expensive. This makes it ideal to add to your crystal collection!

What is Snowflake Obsidian? Meaning, Symbolism & Uses of this Mysterious Black Gem