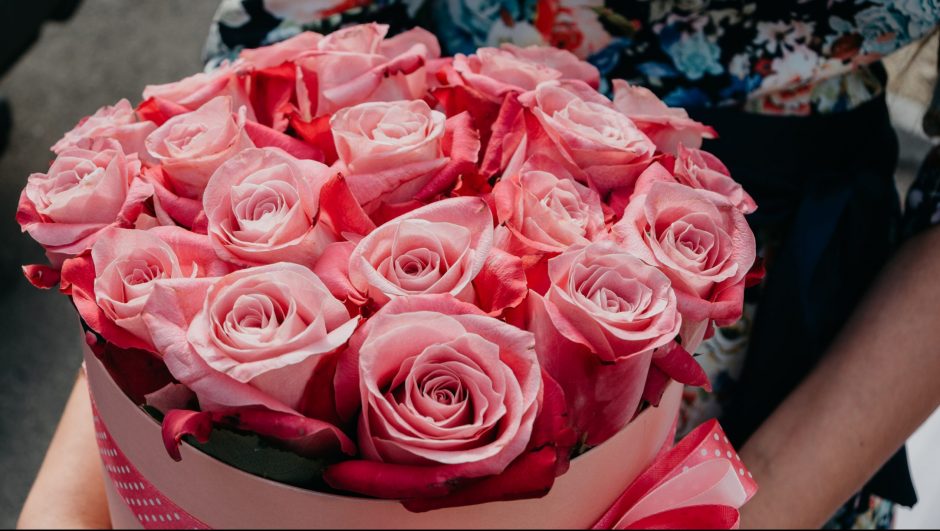 Wedding gifts, birthday gifts and holiday gifts are big business. But not much is known around the consumer trends of another huge market – anniversary gifts. In 2019, there were 61.96 million married couples in the United States alone, of which 80% celebrate every wedding anniversary.

Truly Experiences conducted a survey to uncover the reality of this gift sector. We interviewed 2000 people from the US, UK and Canada who are either married or in a partnership. Below are our findings, with some interesting facts you may want to make a mental note of for your next anniversary.

If you’re married or in a partnership, you’ll be happy to know that you’re most likely going to get an anniversary gift from your beloved. Nearly three quarters (74.2%) of married people buy their partner anniversary gifts, 20% only sometimes, and 6% not at all.

The survey also revealed that younger generations are the biggest buyers of anniversary gifts – 80% of people under 40 purchase gifts for their anniversary. 82% of Gen Z and 79% of Millennials buy their partner anniversary gifts, compared to 65% of Gen X and 61% of Boomers. 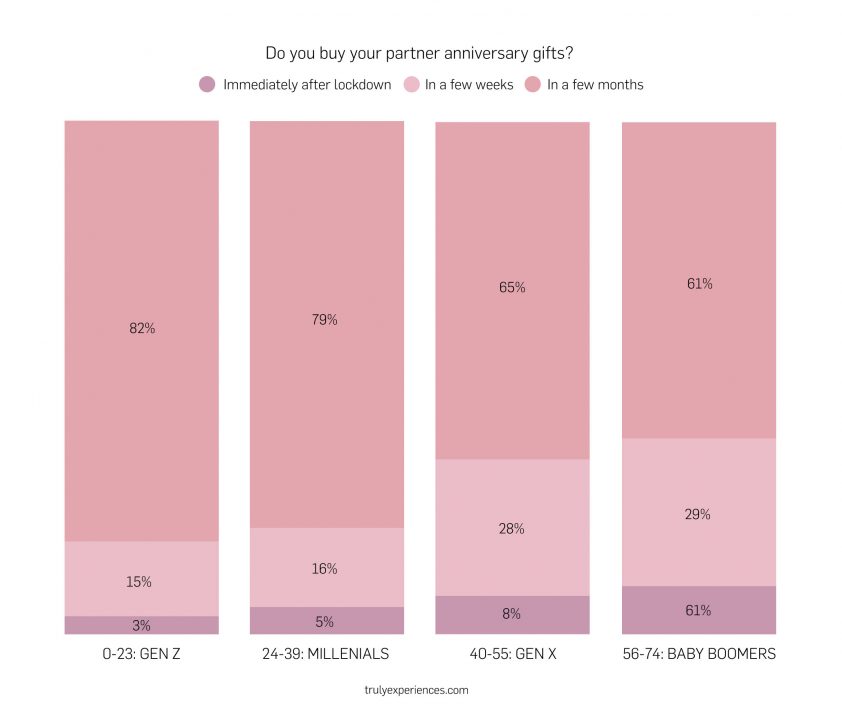 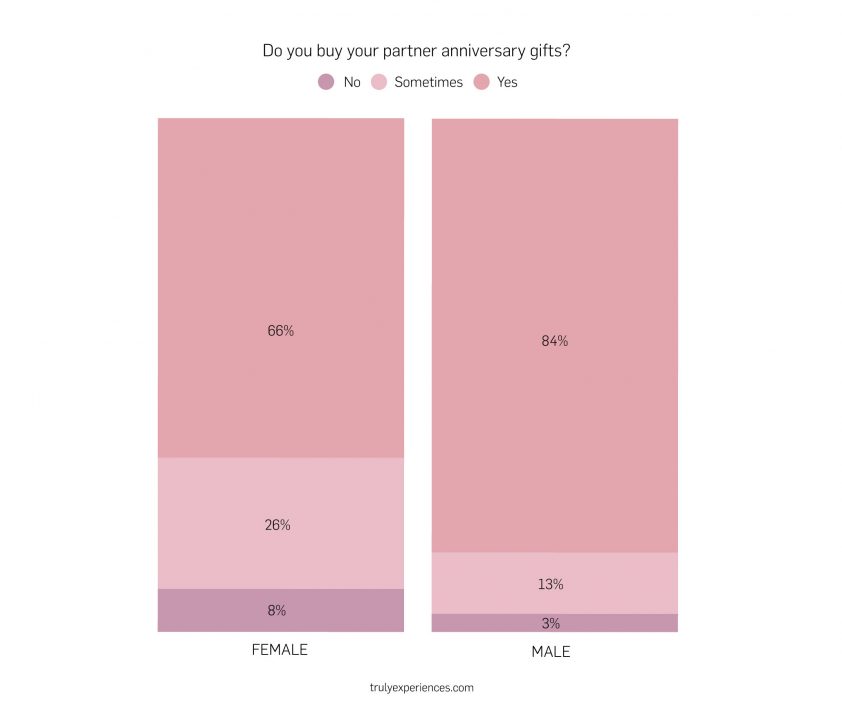 The Most Popular Anniversary Gift Is…. Meaningful Experiences!

It’s a question all married folk are faced with every year – what should I get my husband or wife for our anniversary? If you’re puzzled for gift ideas, here are the most common types of anniversary gifts: 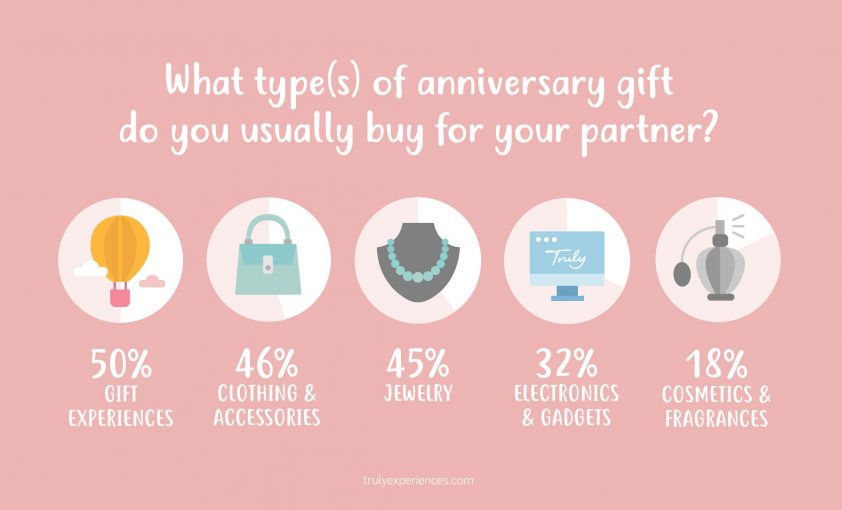 The good news for gift-givers (and receivers) is that the preference for experiences over material “things” has been growing in popularity. According to a 2019 consumer report by the National Retail Federation, consumers are spending more on, and gifting more, experiences. Millennials in particular, America’s largest generation by population, are increasingly spending time and money on experiences.

Veganism Statistics Germany 2022 - How many vegans are there?

It all comes down to the desire to create treasured moments on an anniversary over giving expensive, materialistic gifts. 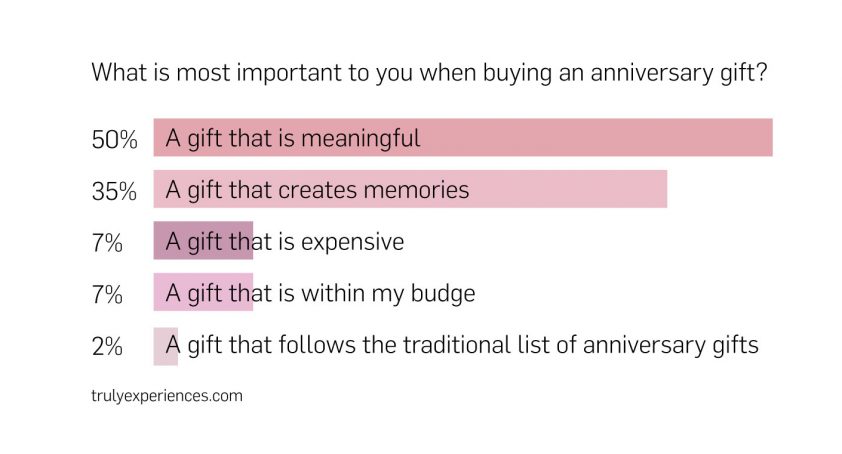 Nearly Half Lie About Liking Their Anniversary Gifts

There’s nothing worse than forcing a smile and a “Thank you, I love it” after opening up a gift you don’t like. Unfortunately, nearly half of those in a partnership or marriage have had to do this at some point. 49% admit they have lied to their significant other about being happy with their anniversary gift.

Men are more likely to lie about being happy about the gifts they receive. 53% of males admit that they faked their response in opening their anniversary gift, compared to 46% of females.

Is it because wives aren’t getting their gifts right? Or because their husbands are trying extra hard to protect their feelings? We’re not sure, but keep in mind that hubby may have been lying about loving that polka-dot tie you got him last year.

Sorry lads! We’re not targeting you, just sharing the facts.

A wedding anniversary is a perfect excuse to spend some time alone as a couple. Of the 80% who celebrate their anniversary, 60% choose to celebrate it together, compared to 34% who include their family and 5% who share it with friends.

Going out for a romantic dinner is the preferred way to celebrate the occasion. 44% choose to go out for a special meal to celebrate their anniversary. 19% go on holiday, 18% prefer doing a new experience and 18% simply want to stay at home.

Not All Anniversaries Created Equal

While wedding anniversaries happen every year, there are those that are worthy of a bigger celebration.

66% agree that there are particular anniversaries they would consider extra special and therefore spend more effort, money, and time to celebrate. These milestone anniversaries (in order of importance) are the 10th, 25th, 50th and 20th anniversary. So if you’ve got one of these special anniversaries coming up, take note!