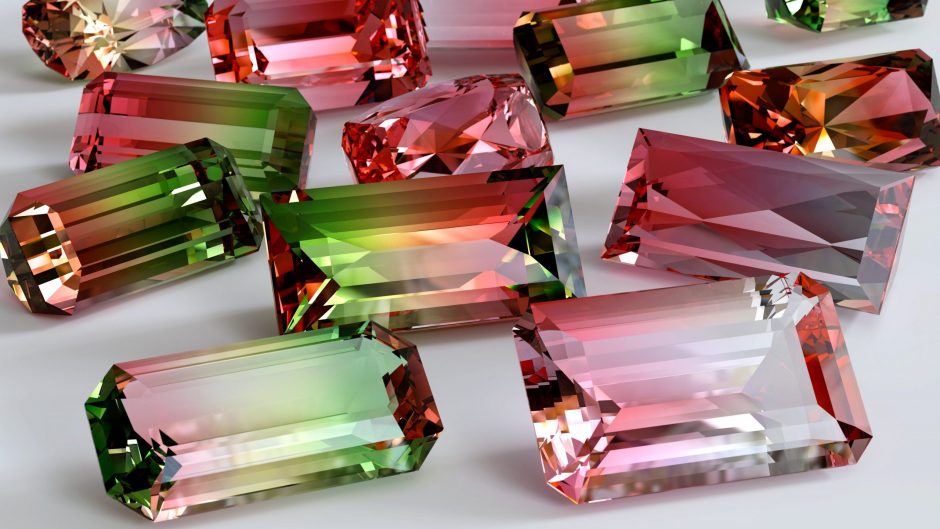 Very rarely do we find gemstones that resemble fruit. It’s quite an odd concept, but watermelon tourmaline is an excellent example of a gem that mimics nature beautifully!

With a green outer layer than resembles a watermelon rind and a pink centre, the stone is aptly named after the fruit. Of course, something as unique as this has plenty of meaning attached to it and forms in the most interesting way.

Intrigued? Find out more about this juicy gem’s secrets…

What Is Watermelon Tourmaline? 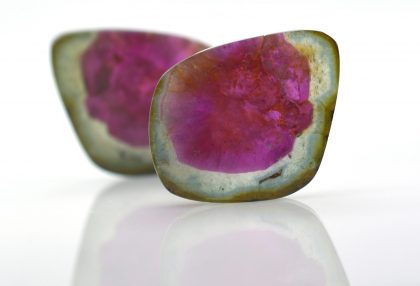 Watermelon tourmaline is a variant of concentrically colour-zoned tourmaline. It’s characterised by its pinkish-red interior and green exterior, making it resemble a watermelon.

The term ‘watermelon tourmaline’ was coined by George Robley Howe from Norway, Maine in the United States. It was later used in a Maine news publication in 1910 and then in an international publication in 1911. After that, it stuck!

Where Is Watermelon Tourmaline Found?

In recent years, watermelon tourmaline has also been discovered in Brazil, Madagascar, Nigeria and Afghanistan.

How Can You Tell If A Watermelon Tourmaline Is Real?

Genuine tourmalines come in almost every colour of the rainbow, from pink to black tourmaline. However, the most popular and coveted watermelon colours are the green outer layer with a hot pink core. It’s most likely that fake watermelon tourmaline will follow this colour pattern. In order to tell the difference, take a close look at the colour separation.

Real watermelon tourmaline will have a fade between colours, whereas a fake version is likely to have a sharp line separating the hues. Also, remember that pink and green tourmaline are the most valuable, so if a gem is on the lower end of the cost scale, it likely isn’t real.

Another easy way to tell if watermelon tourmaline is real is by looking for inclusions. If it looks too perfect and too good to be true, it likely is. Genuine tourmaline usually has inclusions in it. 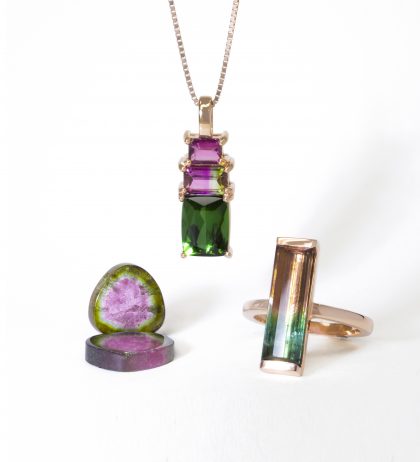 The more rare or true the stone is, the more expensive it will be. Watermelon tourmaline with lighter hues or imperfect colouring and rings is a lot more affordable than the true colours of the stone. However, almost all watermelon tourmaline stones have inclusions, and this has become a mark of authenticity. A stone without inclusions is likely to be a fake one.

Watermelon tourmaline is the same as watermelon quartz. Tourmaline is a variety of quartz that belongs to the silicate mineral class. It presents a trigonal crystal system. It forms a part of the Elbaite group, which is the most colourful of all tourmalines. This group also includes indicolites, verdelites and rubellites.

What Is Watermelon Tourmaline Good For?

Watermelon tourmaline is connected to the heart chakra, which makes it good for cleansing and removing any blockages. The stone restores balance and aids in removing any insecurities to help inspire creativity and self-expression. It’s thought to help attract love and resolve any issues in romantic relationships.

This gem is also great for connecting with nature and the earth. It can help heal emotional wounds and allows the bearer to gain perspective and meaning for certain events in life. When used in meditation, watermelon tourmaline helps to erase unhealthy behavioural patterns and create healthier ways to live a more complete life.

How Do You Use Watermelon Tourmaline? 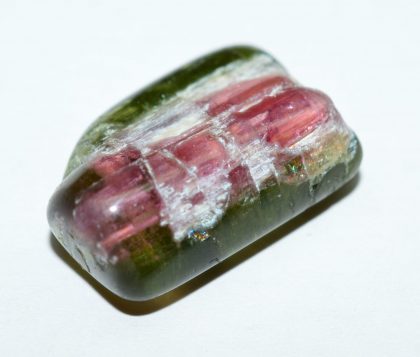 Watermelon tourmaline can be used in a number of ways.

For one, hold the stone in your hand while meditating. This will help to ground you and make you feel at ease. Second, the stone can be used as a decorative piece in your home. Not only will it look beautiful, but it will also allow for open communication and expression within the home.

Because watermelon tourmaline is connected to the heart chakra, it can be used as a pendant on a necklace so that it’s kept close to the heart. This will allow the stone to help heal any emotional wounds, as well as aid the bearer in gaining perspective on any events that may occur in their life.

How Do You Clean Watermelon Tourmaline?

Cleaning watermelon tourmaline crystals is a very straightforward process. The use of ultrasonic and steam cleaners is not recommended, but cleansing them in warm, soapy water is the best course of action.

Once the stone is clean, be sure to dry it off thoroughly. Prolonged exposure to water or sunshine can result in the colour of the stone fading.

Watermelon tourmaline makes for an excellent addition to any jewellery collection. Its unique patterning will stand out and make a statement. Furthermore, it will look good when set in any precious metal and will serve well as a pendant (if you want to keep it as close to your heart as possible), earrings or even a bracelet. Watermelon tourmaline will also add a summery feel to any outfit because of its close resemblance to the fruit.

The higher the quality of the stone and the more vibrant the colours, the more valuable it’s likely to be. Watermelon tourmaline can be a good investment in the long run if you are able to find one that is clearly authentic and displays the coveted green outer rings with a hot pink core. Whether to wear, admire or invest in, this stone ticks all the boxes!

For other bright and beautiful gemstones, have a look at our List of Blue Gemstones and List of Pink Gemstones.