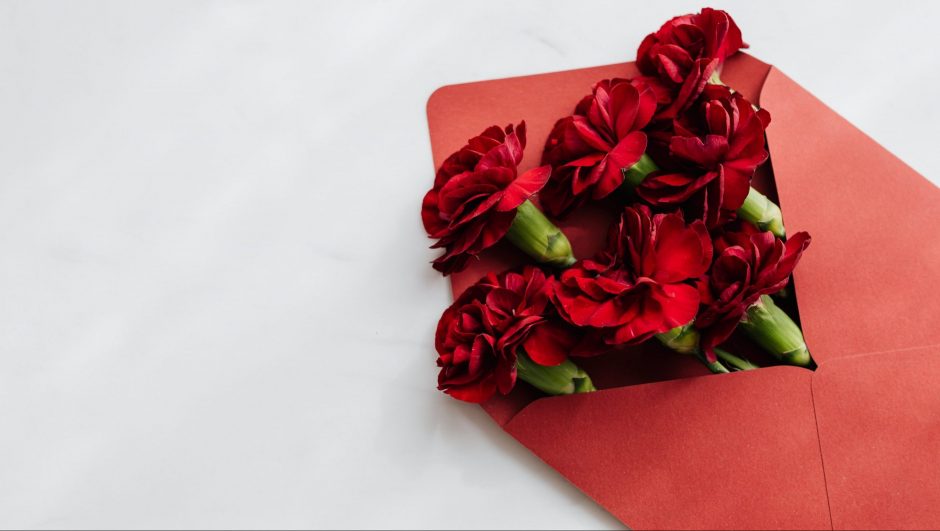 From the classic hothouse rose to the graceful carnation, red flowers are synonymous with love and romance.

Gazing upon a garden or bouquet of red flowers immediately puts us in a mind of passion and closeness. It’s no secret why they are such common gifts on Valentine’s Day and other romantic occasions.

Join us as we explore the wide world of red flower names, stories, and symbolism. 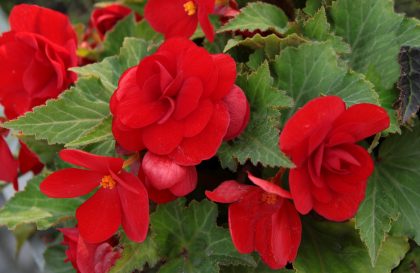 These gorgeous plants provide a vibrant splash of colour to both beds and planters. They are most at home in the shade of larger plants or snuggly tucked away in pots. Begonias symbolise new prospects, as well as gratitude and respect.

Pentas lanceolata (or Egyptian starcluster) is a miniature shrub that fares well in the winter months. While they will not withstand severe frost, they are evergreen. They sprout attractive, little blooms that range in colour from red to white flowers.

Carnations symbolise deep affection, both of the platonic and non-platonic kind, which is why these flowers are a favourite when it comes to gifting. They are internationally cultivated for their popularity and subsequent retail value. According to the list of wedding anniversary flowers by year, carnations are the traditional flower for a first anniversary gift. 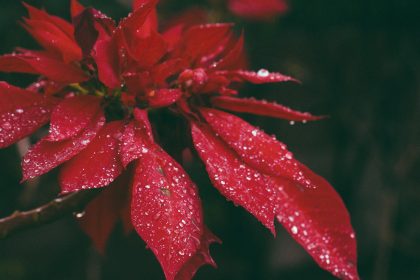 These cheerful flowering plants have roots in Christian symbolism as they remind people of the star of Bethlehem that guided the three wise men. Ancient Aztecs also used them to create a purple dye.

There are several varieties of this prized flower. They come in several different shapes and sizes, although the red orchid specifically is a symbol of rare beauty and strength. They can be difficult to propagate, but if you treat them well, they are well worth the extra care.

A common find in many gardens, zonal geranium is a hardy plant that thrives with little attention. It gives rise to sizeable clusters of red flowers that remain in perpetual bloom almost year-round.

These trumpet-shaped flowers are sun-sensitive and beloved for their friendly, pinkish-red hue. They symbolise home and one’s connection to it, or alternatively familial duty.

Hyacinths are extremely attractive perennial plants that love the sun and add plenty of colour to their surroundings. They come in a myriad of different colours such as deep violet, white, pale orange, and blood red. 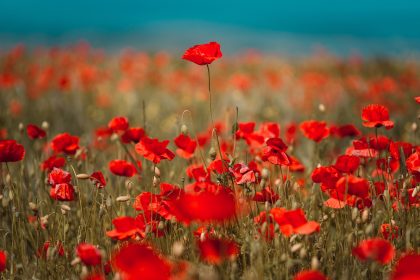 Poppies can be distinguished by their frilly, deep orange petals and black centres. They are often associated with sleep, peace, and death due to their high opium content. While they are resplendent and beautiful, they are highly toxic and better appreciated from afar. Along with gladiolus, poppies are the August birth flowers.

Tulips are charming, cup-shaped flowers that may either be annual or perennial depending on the climate. They tend to thrive more in cooler weather, blooming year after year. Tulips are symbols of love and rebirth, as they are often the first to bloom upon spring’s arrival.

Sweet-pea flowers are sought-after in bouquets and floral arrangements for their vibrant colour and seductive aroma. Symbolising kind-heartedness and romance, sweet-pea flowers will remain in bloom as long as the summer weather remains mild.

These perennial flowers are native to the Americas, producing shocking red blossoms late into the summer months. The name comes from the deep red colour of the robes of Roman Catholic cardinals.

Recognisable by their star-shaped red flowers, these South American annual plants represent feelings of anger and intense fury. While their symbolism might carry negative connotations, petunias add wondrous splashes of colour to their host gardens.

There are several species of freesia that vary greatly in size and colour. The freesia single red is often grown as an annual plant, boasting intense, fragrant, fiery flowers that propagate well over time. 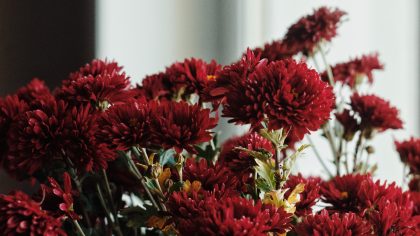 Hardy mums (also known as chrysanthemums) are late bloomers, coming out in the late summer and autumn months. They sport tight clusters of tiny, colourful flowers that persistently seek out sunshine.

There is some conjecture as to whether amaranth is toxic or laden with health benefits. Either way, they produce unique, drooping spikes covered in small, richly coloured red flowers. Its habit of retaining its aesthetic appeal after it dies has caused it to become a symbol of everlasting life.

Canna lilies are attractive, red flowers borne from long, hardy stems. They are indigenous to tropical climates; therefore, they need plenty of sun exposure and perpetually wet soil to reach their full potential.

Gloxinia is a small, South American genus of perennial plants, renowned for their colourful, velvety flowers. Some few believe that gloxinia flowers given to one whom you desire will cause them to fall deeply in love with you.

Calla lilies are hardy, versatile, perennial plants that are iconic and much prized as gifts. Red calla lilies can symbolise admiration, courage, love, and passion while their white and yellow counterparts have links to purity, faithfulness, and gratitude. 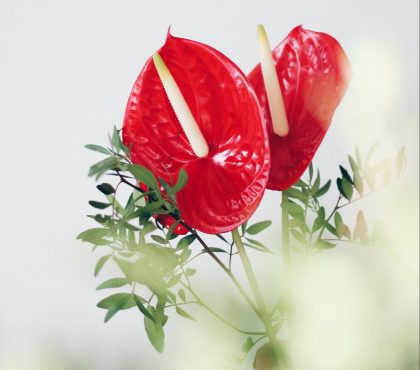 Anthurium (or laceleaf) plants bear incredibly unique crimson flowers with a smooth, glossy texture. They do well as house plants due to their sensitivity to direct sunlight.

These Asian summer flowers are laden with cultural significance, believed to guide disembodied souls to reincarnation. They also go by the name “red spider lily” due to their multiple spindly, red petals.

Belonging to the mint family, this perennial herb can soothe stings and insect bites. Scarlet bee balm (also known as crimson bee balm) is native to the eastern seaboard of North America. 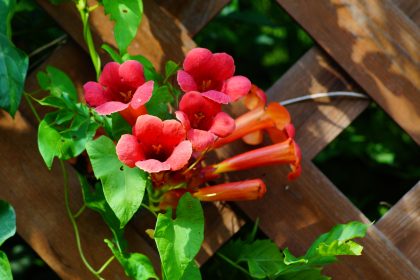 Another North American native, the red trumpet creeper produces crimson, trumpet-shaped flowers. Like many vines, it requires regular pruning to keep it from overrunning its neighbouring plants.

These velvety, long-blooming flowers boast a gorgeous, ruby-red hue that fades to white near the edges of the petals. They are aptly said to symbolise cheerfulness and love.

Marigolds are garden favourites as they look stunning both in the ground and dried as part of a floral arrangement. In many cultures, marigolds are linked to death, grief, and resurrection.

Dahlias are known for their longevity, often lasting well into autumn when most flowers are long gone. Victorian symbolism links dahlia flowers to particularly strong and lasting human bonds.

Also known as the Jerusalem cross, these herbaceous perennial plants give rise to brilliant clusters of small, red flowers that bloom all throughout summer. 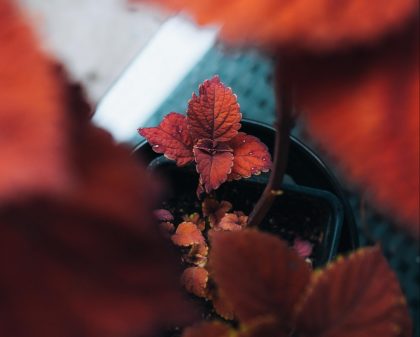 These leafy, maroon-coloured plants are colloquially referred to as poor man’s nettle. They are incredibly easy to propagate and make an excellent attractive ground cover.

Salvia splendens (or scarlet sage) give rise to tender spikes that become shrouded in bright red flowers during the spring and summer months. It is a hardy plant that should be regularly cut back and pruned to avoid invasive behaviour.

Gaillardia, commonly referred to as blanket flower, takes easily to most gardens but blooms only for a short while. The name “blanket flower” is due to its ability to propagate itself, forming large patches of ground cover.

Verbena, whether the annual or perennial variety, does extraordinarily well in high temperatures and prolonged sun exposure. It’s a symbol of romance and fond memories. 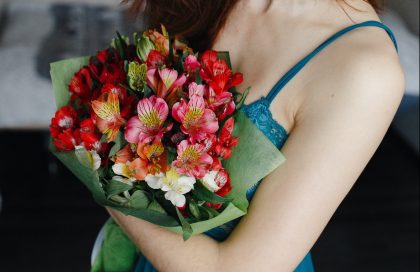 Also called the red Peruvian lily, alstroemeria is a semi-evergreen plant that sports a crown of slender stems. During the spring and summer seasons, these stems form stunning, trumpet-shaped, red flowers.

Reminiscent of a jester’s hat, the daylily is a colourful flower that is not actually a true type of lily. Its Latin name (Hemerocallis) translates to “beauty for a day” as blooms once in the morning, only to die by nightfall.

Cosmos sulphureus, the red species within the cosmos genus, bears plucky scarlet flowers that bloom well into autumn. Cosmos are popular as cut flowers due to their longevity and vibrant colour.

This particular variety of sunflower is rare, but worthwhile considering when choosing new plants. Its dramatic flowers are a sultry, deep shade of red that stands out in any garden. 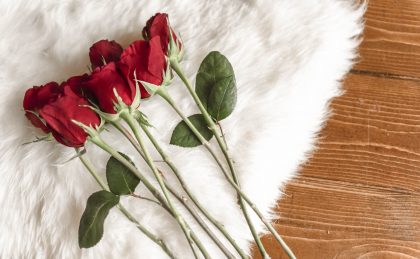 The most renowned and popular red flower of them all, red roses symbolise romantic love and deep affection. They are prized both as gifts and ornamental garden flowers.

The drooping flowers of the wild red columbine are borne from thin, fragile stems. Despite its vulnerable appearance, these flowers do well in the wild, wooded areas of North America and Europe. Native Americans crushed the seeds and rubbed them between their hands as a love charm.

Feeling inspired to plant red flowers? Which ones will you grow?