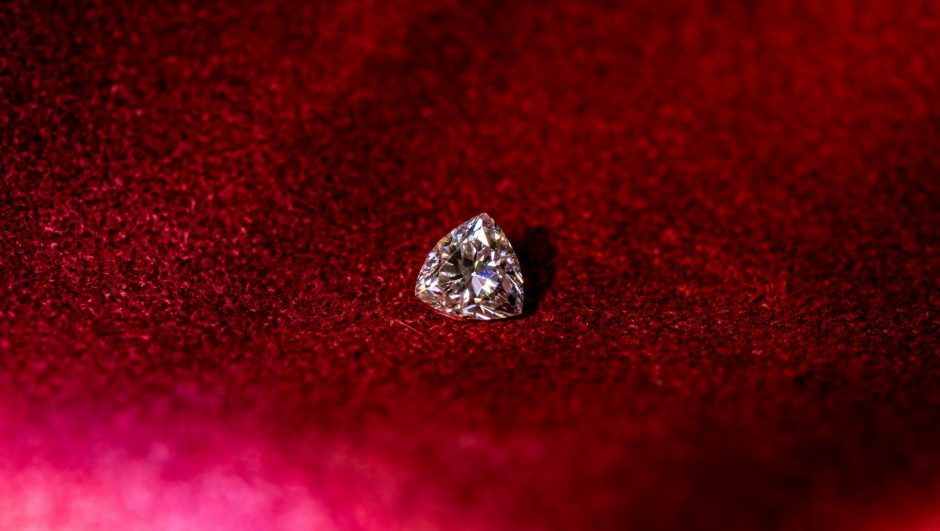 If you’re looking for an alternative to traditional diamond cuts or you want a fabulous accent stone for a jewellery design with added fire and flare, a trillion cut diamond might be the one. Also known as the trilliant cut, the unique symmetry and proportions of the stone make them perfect for accents.

However, their relatively rare use as solitaires and centre stones makes them a great choice if you want a design that stands out from the rest. Read our trillion cut diamond guide for everything you need to know about buying these gorgeous precious stones.

What Is A Trillion Cut Diamond? 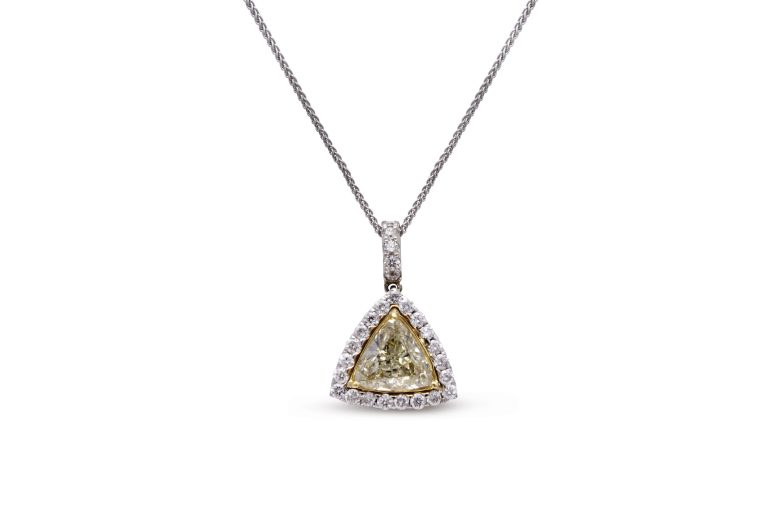 Trillion cut diamonds are diamonds that have been cut into a triangular shape. Their three sides are usually of equal length while the surface has a flat table.

When they’re used as accent stones, they’re cut with 31 facets and have straight sides. When they’re to be used as a centre stone in a solitaire ring or another piece of jewellery, they’re usually cut with 50 facets while the edges are given a slight convex shape to make them appear larger than their true carat weight. You can find trillion cut diamonds with variations in shape and the number of facets.

The Origin And History Of Trillion Cut Diamonds

The history of trillion cut diamonds is relatively short, compared to other cuts. The Asscher brothers based in Amsterdam developed the first triangular cut in the 18th century.

Their design inspired other triangular diamond cuts such as the briolette and the Old Mine triangular, which in turn inspired Leon Finker, who created the trillion cut in the mid-1960s. In the late 1970s, Finker tried to trademark the name “trillion,” but by then, it had been applied to any diamond cut into a triangular shape. He patented the cut in 1978, and in 1991, he trademarked the name “trielle.”

What are Asscher Cut Diamonds? Everything You Need to Know

What Are The Pros And Cons Of Trillion Cut Diamonds?

The unusual shape of trillion cut diamonds means they have pros and cons. It’s important to consider all these aspects when deciding whether the cut is the right one for you.

How To Measure And Select A Trillion Cut Diamond

There are a few tips to follow when measuring and selecting a trillion cut diamond when buying one loose or if you want one as a centre stone:

What are Pavé Diamonds? A Complete Gem Guide

What Are The Best Ring Settings For Trillion Cut Diamonds?

As mentioned above, V-prongs are the best prongs for protecting a trillion cut diamond in its setting. As far as settings go, bezel and 3-prong halo settings are perfect for the triangular shape. As beautiful as they are as solitaires, we love the stones in diamond settings where they are used as accents in a three-stone ring.

When not cut too shallow, trillion cut diamonds are famous for their brilliance and fire. In short, yes, they certainly do sparkle!

How Much Is A Trillion Cut Diamond Worth?

The value of a trillion cut diamonds depends on carat weight, clarity, colour, and the quality of the cut. As the price of diamonds increases exponentially with size, large stones cost significantly more per carat.

If you’re looking at trillion cut diamonds as part of a setting, you’ll also need to factor in the number of stones used, the total carat weight, and the type of setting.

How Popular Are Trillion Cut Diamonds In The US And Around The World?

Round cut, princess cut, and other traditional cuts remain more popular than trillion cut diamonds in the US and further afield. In 2017, the trillion cut was the 12th most popular cut – they accounted for only 0.02% of cuts. The top 5 most popular cuts were round, princess, marquise, cushion, and emerald.

That said, the trillion cut diamond is growing in popularity. The renewed interest in the cut is due to its effectiveness in accent stones. Not only do the accents appear larger than their carat weight, they add spectacular sparkle to pieces of jewellery. The cut also is becoming more popular among people who want something different to classic or traditional. Trillion cut diamonds add a beautiful touch of modernity and adventure.

What Is An Old European Cut Diamond? Everything You Need To Know

Compared with round, princess, marquise, cushion, emerald, oval, pear, radiant, and other cuts with the same carat weight, trillion cut diamonds look larger. Their cut and the brilliance and fire it produces also makes them one of the best options for stones with inclusions or other flaws. The cut lets you make the most of your stone’s carat weight, which means you can have a larger ring than if you had chosen one of the more popular cuts.

There’s no doubt about it – trillion cut diamonds are exquisite. Use our guide to help you make the best decisions when looking for the stones for you.