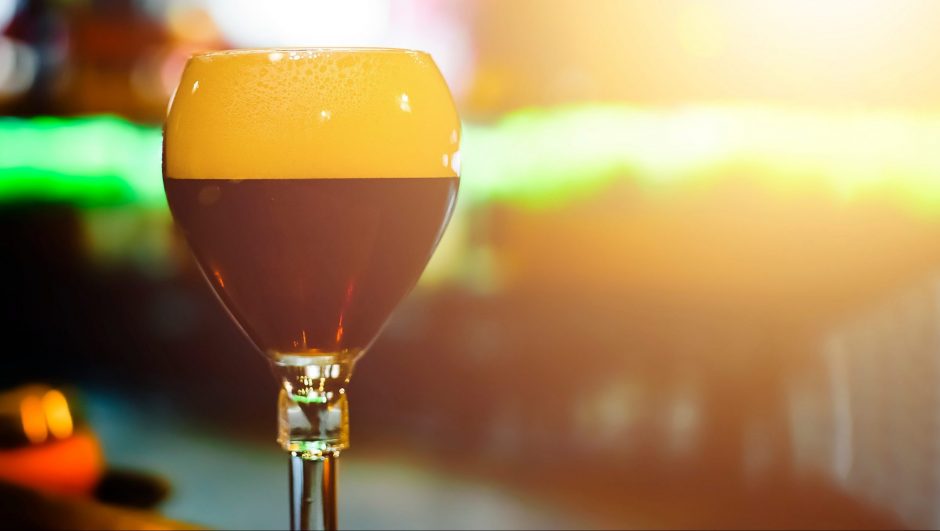 Did you know that Catholic Monks drink and make beer? Maybe not to the extent the mainstream public does, but the next time you’re enjoying a cold one with your mates, know that you’re not so different from the monks in Belgium.

However, if you find yourself enjoying a Trappist monk beer, you can sleep soundly knowing all the proceeds go towards the monastery and the local charities.

What Is Trappist Beer? 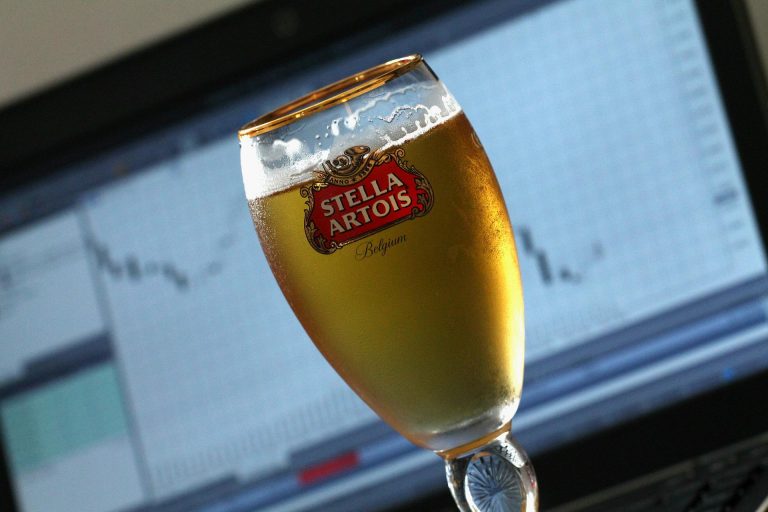 Belgian Trappist beer is one of the rarest beers in the world, as it can only be produced with the overseeing of the monks, to ensure all production follows the century-old traditional methods. Some Trappist beers are even made by the monks themselves, as the monastery firmly believes in the importance of working with your hands. All the Trappist beer on the market has to be verified and is only sold to financially support the monastery, so no profit is made. The beer created is a delicious pale ale. There are three different types and they all boast light fruity citrus, spicy, flavours and varying alcohol quantities.

What Is The History Behind Trappist Beer And Do Monks Really Drink It?

As you probably already know, drinking alcohol is not considered a sin in the Catholic Church. However, drunkenness is prohibited, therefore the beer being sold to the public is not the same beer the monks would enjoy. The monks tend to drink a light version of the beer, with an alcohol content of 3%, so you’d have to have a few to be considered inebriated, which they would not do.

Beer is still considered a historically proud traditional drink, as they did invent the method as far back as medieval times. The intention of the beverage was to act as a filling drink to assist in getting through fasting periods, and “liquid bread” was born. The beer made in medieval times by the monks still has a nutritional value, similar to bread. However, with the advancements in beer-making technology, this is no longer true. Unfortunately, a beer of today’s standard could not substitute for a meal, sorry.

What Makes It A Trappist Beer?

Although the beer has been around for centuries, the Belgian Trappist beer was only made available to the public around 80 years ago. It’s important to note the difference between Trappist beers and Abbey beers.

Trappist beer is considered an Abbey beer, except it is still made by the monks or under the supervision of the Trappist monks, whereas abbey beer is made in the breweries. Although the methods are the same, the purposes are different; the proceeds of the Trappist beer go directly to the monastery and charitable organizations whereas this isn’t always the case with abbey beers.

You’ll be able to tell the difference, as the Trappist beer bottle will have a hexagonal logo with the words “authentic Trappist product”.

There are 7 different Trappist beers that pioneered the production of the beer and they each belong to a monastery. The monasteries’ names and the beers they produce are:

So, you’ll know exactly which monastery the proceeds will go to. If you aren’t able to get ahold of one of these names, any abbey beer has a similar recipe and taste, the only difference is the fact it wasn’t produced in or near a monastery, but the recipe does abide by the methods of the monks.

Trappist Breweries Outside Of Belgium

In the US, there’s the St Joseph’s Abbey in Massachusetts, The Mount St Bernard Abbey in England, the Mont des Cats in France, and the Tre Fontane Abbey in Italy. All of these Trappist monasteries can now legally make and sell the beer for charitable profit.

How is Trappist beer made?

So then, what is this sacred method that makes the Trappist monk beer so delectable? The method is similar to that of making any traditional pale ale, and it yields a variety of 4 different types of Trappist beers, each with varying characteristics. The ale is brewed in accordance with the German Reinheidsgebot, which utilizes the ingredients of water, hop, yeast, grains and some sugar for the fermentation.

The Different Types Of The Trappist Beer

There are 4 different types of beer, and they are named numerically.

The Enkel was only recently introduced to the market in 2015 and is the original “light” recipe the monks drink themselves, as the alcohol content is only about 3.5%.

The Dubbel beer is much darker than your average blonde ale, with a flavour of dried fruit and has a strong alcohol content of 7%.

Then there’s Tripel, golden in colour to match the flavours of bitter citrus and alcohol content of 8%.
And lastly, the Quadrupel, which is sweet in flavour with a hint of Madeira, and has an intense alcohol content of 10%. This one is best enjoyed as a sipping drink, or you’ll be knocked out after your first glass.

How Do You Serve A Trappist Beer?

In order to do this beer justice, it’s important to note how the monks intended for you to enjoy it. You’ll certainly feel like you’ve been transported to medieval times with the goblet/ chalice style glassware provided by the monastery.

This type of glass allows for a strong stream of bubbles, resulting in the beer forming a good head. Feeling like a Game of Thrones character while enjoying your drink might just be the best reason to try a Trappist beer.

What Food To Pair With Trappist Beer 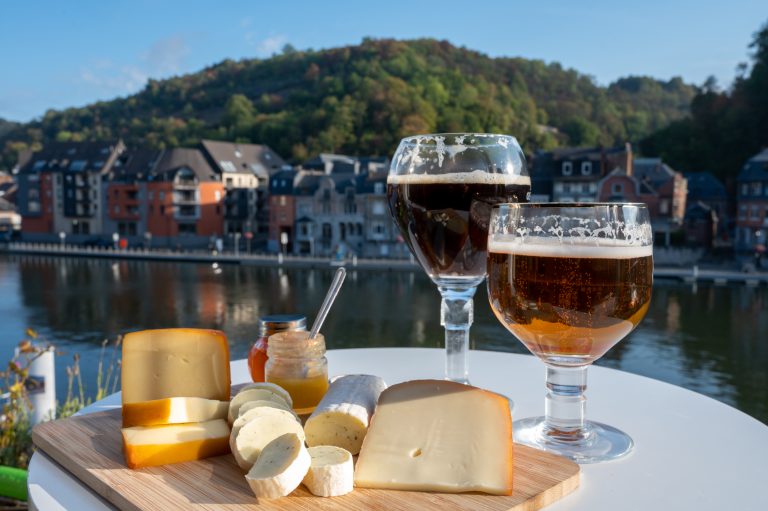 At the end of the day, Trappist beer is extremely similar to your well-known Belgium beers. Its light, citrus, fruity flavour is the perfect accompaniment to the local treats such as sweets like waffles, dark chocolate and fruitcake.

Dubbel, the richer darker coloured beer goes well with meat like sausages. Trippel will go excellently with light snacks like ham and cheese. Quadrupel is one that pairs well with a rich chocolate dessert, as it bears similarity to a strong dessert wine or liquor.

Where To Find Trappist Beer

Although this acclaimed beer has gained immense popularity among beer fanatics and has even begun its production in foreign countries over the last decade, it is not the easier beer to come across. The monastery that oversees production has to put all religious pursuits before the production of the beer, as the intention is not to satisfy the customer demand, but rather to make just enough to sustain the living cots of the monks and help a few local charities in need.

This means that the production of the beer will not increase any time soon, even if the beer gains popularity, which it has. However, there is hope. The number of monasteries that have been granted to right to produce authentic Trappist beer has increased over the last decade, meaning there are more sources for the beer to come from.

Another great way to support the monks of Belgium is by taking a tour of the monastery and sampling some of the beer on the land of the makers. If you are interested in history, religion and beer then this tour will be perfect for you. It’s important to know that although some monasteries are open to tourists, you’ll have to be connected to the right tour guide agency, as this will be an experience of a sensitive nature.

The majority of the land is off-limits to the public and the areas you can explore require the utmost respect, as they are centuries old and are holy places of prayer. Discretion, a level of quiet and an understanding and respect of the rules will be needed, so if you are unfamiliar with this then it’s important to go with a tour guide who will be able to familiarize you.

What Does Trappist Beer Cost?

The monks are modest when it comes to pricing what could potentially be a more expensive beer. With all the effort that goes into it, authentic unaltered ingredients and recipes, and a low supply of the product, this beer could almost be considered a collectable.

Surprisingly you can find a Trappist beer for as little as £3 a bottle, around the same price as your average beer on the market. If you’re unable to make it to a Belgian monastery anytime soon, there are many websites that sell the beer online to European countries, so it’s fairly accessible. Smaller beer speciality pubs might stock the beer if you’re lucky, but it’s not a common one found in your average drinking spots.

Now that you’ve found a delicious holy beer to enjoy, you can happily sip away knowing that your money has gone to a good cause, and you’re drinking a beverage of a century-old golden standard.