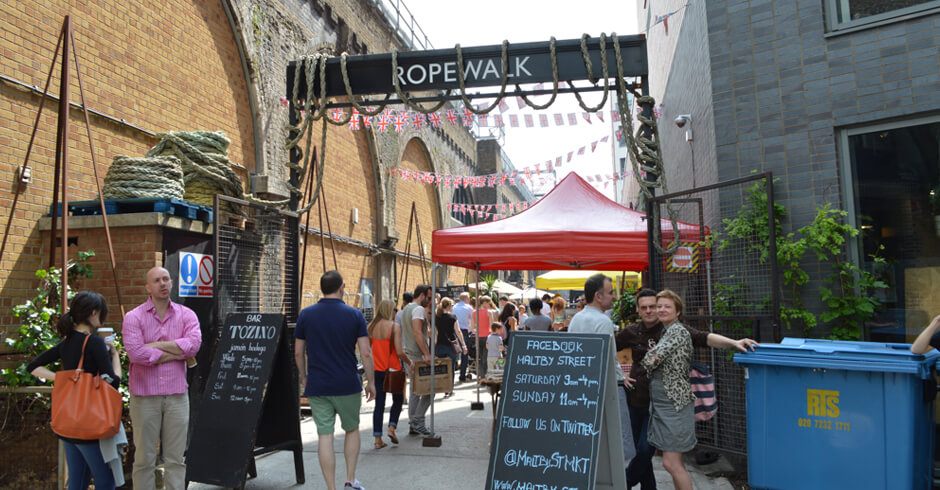 When two of the grandfathers of all things cuisine, Alain Ducasse and Joël Robuchon, declare London as the global gastronomic capital, you know something must be going right. Alongside the explosion in top-notch restaurants is a food market culture that is really turning heads. We take a look at the top street food markets in London.

Just off Tower Bridge, into the up-and-coming area of Bermondsey, lies an uncovered gem under the Maltby Street railway arches. Come here in the week and you’d probably wonder why you’d bothered. At the weekend, however, the small space comes to life with all manner of food stalls clustered together and colourful bunting swaying above.

What to eat: Monty’s Deli provide some of London’s best sandwiches, while Comptoir Gourmand offer an array of fine French patisseries. For drinks, the Little Bird Gin popup bar offers some scrumptious cocktails, and Tom Gosnell – revolutionising the mead scene in Britain – has a spot for his refreshing, lighter Gosnells London Mead.

SEE THE MOST INDULGENT DINING EXPERIENCES >>

Sitting just off the banks of the Thames for 1000 years – or so they claim, at least – Borough Market is one of the oldest markets in Britain. Back then they probably weren’t serving Indian street food and pad Thai, though I’d wager a rudimentary version of Pieminister’s scrumptious pies might have been around.

What to eat: Roast To Go’s pork belly sandwich is a must, while Khanom Krok serve some of the best pad Thai in London. Pieminister, as mentioned, might well offer the best pies in the capital. 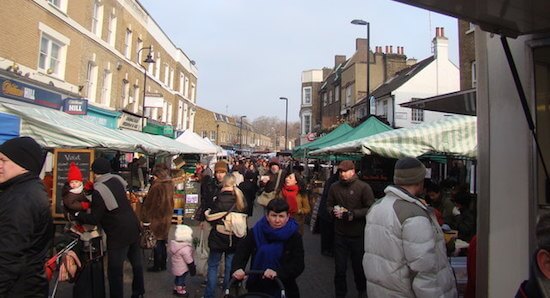 Not a bad setting for a summer stroll, Broadway Market stretches from Regent’s Canal down to the bottom of London Fields. Starting out as a fruit and veg market, this slowly dwindled away towards the latter part of the twentieth century, until a few solitary stalls remained. That was until 2004, when the weekly Saturday food market began. Today it remains just about east London’s trendiest daytime destination.

More of a nomadic market, Streetfeast has gained a loyal following since its inception three years ago. In summer time, find it situated at Dalston Yard, while in the winter months it relocates indoors – to Hawker House in Haggerston. Either way, the regulars remain.

What to eat: Yum Bun, with its array of Chinese-inspired buns, and Smokestack, with their incredible brisket, remain the two stand outs. Duck n Roll is a new addition, by the masterminds behind Club Gascon, that offers everything in the world of duck. 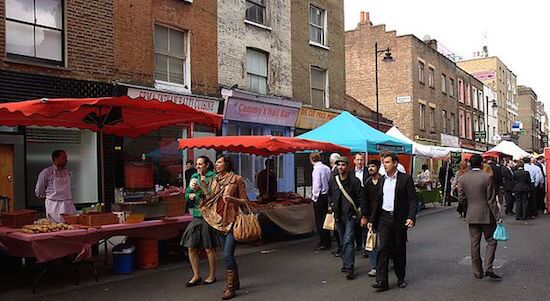 Only open on weekdays, Whitecross Street Market is a haven of street foods, perfect for a lunchtime snack. Located between Old Street and Fortune Street, the workers of Clerkenwell and Shoreditch can be seen descending upon it each day. Despite a three hundred year old history, it remains one of the lesser known markets in the capital. Among regulars, however, there are now demands that it makes a weekend appearance too…

What to eat: Luardo’s is worth a flutter for their Latin-American fare that includes burritos to rival those found in Mexico, while Mario and Carol’s Italian food has long been a hit with regulars. 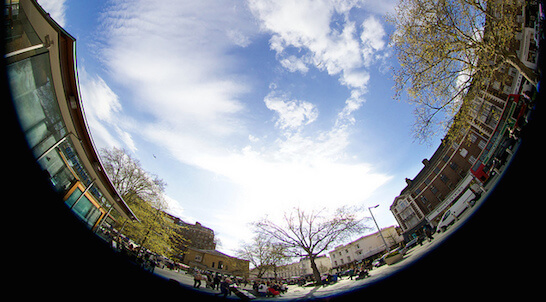 Located just off the Kings Road, the Duke of York Square Market offers small, artisan producers and family businesses the chance to set up stall. It was originally set up by the upmarket food shop Partridges in 2005, but now has vendors arriving from the likes of Maltby Street and Borough Markets.

What to eat: London’s Little Observationist recommends the Streetisans hut, while Rainforest Creations provide their line in guilt-free, healthy food. 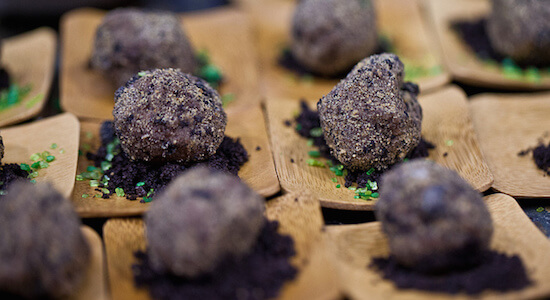 Pushpal Dhawan is seriously passionate about sourcing local and seasonal food and drink. He’s not the only one: the idea of local foraging has taken off on the restaurant scene too. Dhawan saw that west London was somewhat lacking in its share of the food market pie, which brought about the Wild Food Market – a collection of delicious, locally sourced goods. You’ll have to head west for this one, recommended by Curious London, as it’s located on the site of Addison Primary School in Brook Green.

What to eat: The Social Meat Club provides an intriguing combination of Nordic and American smoking BBQ styles, while Bad Ass Cakes makes for the perfect dessert – Mrs B is formerly of Mosimann’s.

Small but always bustling – its Soho location sees to that – Berwick Street Market is particularly popular with local workers looking for a lunchtime bite. It dates back to the 18th century when it was established as a fruit and veg market. Though a lot of the characterful grocers have flown the nest now, the food stalls replacing them make up for it.

What to eat: Bahnmi11 show the influence French colonialists had in Indochina with their delightful Vietnamese baguettes, while Tongue’n’Cheek is well worth a trip for their sustainable Italian-inspired burgers.

Fancy discovering all the best of London’s street food markets for yourself? Join Chef Andy Bates for a culinary market tour of the city, while unearthing all the tricks of the trade.