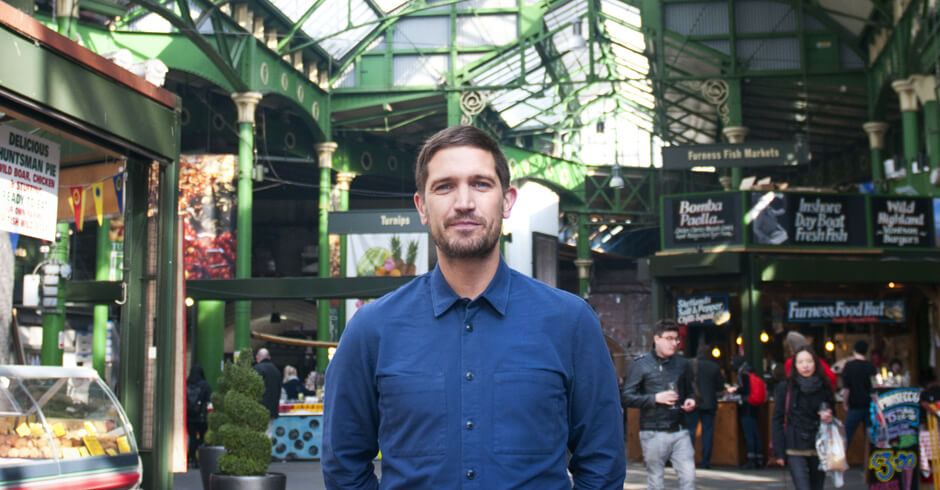 Borough Market. One of the most vibrant and popular food markets in the world. We’ve come down here to not only indulge in a Monmouth latte, and to sneak in a heavenly grilled cheese sandwich at Kappacasein, but also to meet up with Andy Bates, the chef who has been gaining international fame as an authority on street food. Over the past few years there has been a boom on the streets of London, with markets, carts, stalls, and hand- held goodies leading the foodie charge. We sat down with Andy to discuss how he got into this business, and where he feels the street food trend is heading.

Andy is known for being a champion of British cuisine as founder of the company Eat My Pies, and can regularly be seen discovering the world’s best street food on the Food Network. We asked Andy what initially drew him to the street food scene, and he told us, “I was working in the Brick Lane area. I have a big love for world food, I think being British we have a very good palate — we aren’t regional are we? I grew up with Indian, with Chinese, with Thai food, but I noticed no one was doing British food. It really stood out to me that I couldn’t buy a pie, but I could buy noodles, paella, all food from around the world. I noticed there was a gap in the market, and I found a little niche in it. I started doing Brick Lane, and then Whitecross Street and then Broadway Market, and then started doing events, and then the Food Network and then travelling the world!” 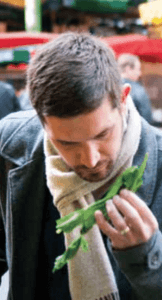 Curious, and a little jealous, we asked how exactly Andy ended up on the Food Network, and he explained that back when he was pie slinging at Eat My Pies, he had a friend doing voice overs for the network, who was then approached to make short two-to-three minute fillers for the breaks between shows, “They came to my kitchen in Hackney, we made it look nice, and dressed it for the camera. They took the footage to America, and Food Network commissioned me for some new shows.”

His Andy Bates Street Feasts series has seen him travelling the US, as well as Brazil. We asked where he would like to go next, “Japan is on the top of my wish list of places to go — I heard a great quote, ‘You’ll never have a bad meal in Japan.’ It’s a bold thing to say, but it’s the only place that is a bit like being on another planet, I want to experience that kind of being on another world. It’s a priority to go there.” However, it’s not all burritos in the sun, as he told us that he’s always working.

While Andy’s skyrocketing career is a bit out of the norm, the significance that the street food movement has had on aspiring restaurateurs and chefs is not lost on Bates, “Street food is nothing new, is it? But I’m a big believer in small businesses — and it’s a great way to start a business, no brick and mortar, low overhead, great way to build customer relations. It’s really important that we allow small businesses to develop, and this is a good way for young people to get out there. They’re able to work for themselves, and that’s a big draw.”

Also see  Sushi Making at Kouzu with The London Blogger 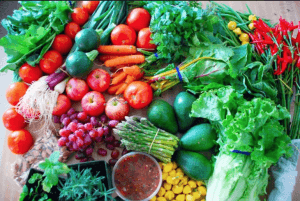 Another big idea trending in food at the moment is farm-to-table. Knowing where your food is coming from, and how it gets to your plate, it seems is becoming more and more important to diners and chefs alike. We asked if Andy feels there’s a way for street food vendors to adhere to the same farm-to-table ideals that top restaurant chefs have been focused on. He sees no issue in this, “The joy of London is that these markets do provide local ingredients. The joy of London markets is that if you are a careful vendor you’ll be able to say to your customer — this is free-range, it’s from a farm in Essex — you can speak face to face with your customer and tell them exactly where you bought your ingredients that morning.”

The streets may seem a different foodie world than that of chefs inhabiting restaurant kitchens, but there has definitely been some movement by market sellers into brick and mortar venues. This is creating a plethora of “specialist” restaurants, 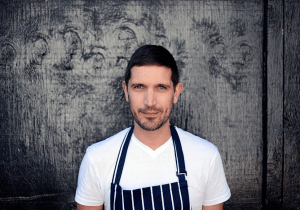 I’m interested how the public will take that.” Time will tell how these establishments hold up, and we are very curious as well.

As a world-traveller whose job it is to keep up on food trends, where does he get his intel? Where can other travellers be sure to find the best recommendations for city street food, and avoid pitfalls? “Social Networking!” he tells us, “Find the apps — that’s how it all works these days. Find what people are talking about! Put street food into Twitter! There are enough people tweeting about it, blogging about it. You can literally turn on your phone, every time I’m in a new city now I’ll look on Twitter rather than finding a guide.”

Also see  Where is the Best Sushi in London? 6 Restaurants to Get Your Sushi Fix

Feeling that maybe pulled pork and burgers have had their time in the street food sun, we asked Andy what he thinks will be the next big London market trend. He is a big fan, as am I, of Korean BBQ, “I think Korean BBQ is going to be big, it’s been moving around, but that fusion of BBQ and Asian — that sweetness you get from Asian food, sugary grilled meat — it makes very good snack food.” Can I get it on record that I agree with Andy on this, 100%?

Enjoy a tour by yours truly, Andy Bates, through the London Markets !