Feel the thrill of the great outdoors with our range of exhilarating experiences. From golf and salmon fishing to luxury sailing and clay pigeon shooting, we have a collection of outdoor activities that are sure to excite and delight.

Renowned around the world for their salmon waters, a week in Norway is the trip of a lifetime for fishermen.

Anglers from around the world journey for a Norway fishing break; with Europeans making this pilgrimage since the mid-1800s, chasing the catch of their lives. The number of fish may be fewer than in Russia or Iceland, but the patient fishless days all serve as part of the pursuit of landing that dream salmon. Indeed, any European who has caught a 40-50 lb fish has, more than likely, snagged it in Norway.

Even those who return from Scandinavia without the giant prize speak favourably of the unique experience its rivers offer. With a dramatic untouched landscape and great group camaraderie, an escape to the Orkla River will never be forgotten – whether with friends, father, son, or as a solitary traveller.

Aunan Lodge, your home-away-from-home for the seven nights of this Norway fishing break, is located in the municipality of Rennebu in central Norway, about 1 hour and 15 minutes drive south of Trondheim. With 12 unique pools spread over more than three miles, the fishing is varied; whilst a limit of 12 rods ensure each is not over-populated. One expert guide is provided per six anglers, making tactical and technical advice readily available for all.

Also see  The Wine Revolution: What is Natural Wine?

The Norwegian salmon season runs from 1st June – 31st August, and when you go is entirely up to you. June presents fewer fish but the largest salmon, so is ideal for experienced anglers. In July and August the salmon are generally smaller, but with a greater chance of pulling a fly; so ideal for less experienced anglers. There is no set rule though; with fishing across the season amongst Europe’s most sought-after.

Lake Beld, in the serene Gorenjska region of the tiny country of Slovenia,
is quite possibly one of Europe’s best-kept secrets.

Found south of the Austria-Slovenia border, it’s set at the foot of the Alps, and a touch east of the Triglav National Park. Despite its luscious forests, purifying clear-watered lake, and mountainous backdrop, Lake Bled’s defining feature is the pilgrimage church situated in the centre of the lake itself. The church, now over 400 years old, is dedicated to the Assumption of Mary – the ascension of the Virgin Mary’s body and soul into Heaven.

It might go without saying, but given its surroundings, Lake Bled’s church has to be one of the most idyllic places in the world to get married. Traditionally, the weddings that do occur there involve a little superstition. One such practice, in the name of inspiring good luck, is for the groom to carry his bride up the 99 steps leading up to the church, and once they’re there, for the groom to toll the church bells.

Another long-standing tradition is for visitors to be transported from lake edge to island by rowboat. The Slovenian pletna, similar in appearance to a gondola, has been in service since pilgrimages to the church began all those centuries ago. Incidentally, the lake and adjoining Emerald River are so picturesque that they have hosted the World Rowing Championships on four separate occasions.

As well as leisurely walks navigating the admirable scenery, the climate provides the ideal conditions for the region to play host to a range of outdoor activities including skiing, rowing, swimming, white water rafting, and paragliding. 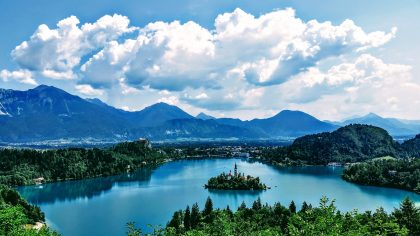