Blog » Travel & Getaways » North America » New York » A Cut Above the Rest: In Conversation with Ted Gibson, Stylist to the Stars 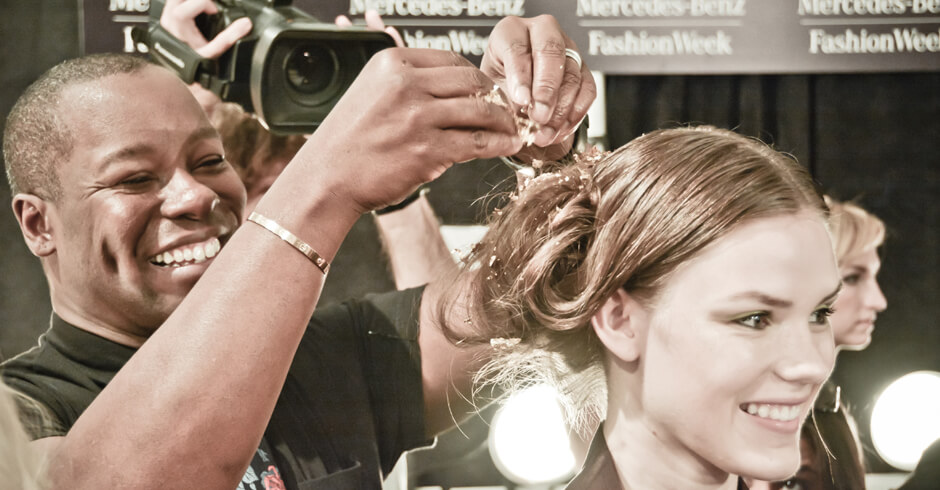 Just over 21 years ago, Ted Gibson started noticing something odd in the Highly Textured Hair class he was teaching. A particular student was getting up and walking out halfway through his lessons. “I think he had a little issue with authority figures,” Ted tells me. “And twenty plus years later he still has those issues.”

The stroppy student, Jason Backe, is now Gibson’s husband and business partner. Together they head up Ted Gibson Beauty, responsible for two of the most sought after hair salons in all of the US. The dynamic works well, says Gibson. “We work together, we play together, we travel together, we run our businesses together. It’s fantastic.” As I chatted to Gibson, Backe, the colorist among them, was preparing to work on Idina Menzel’s hair in time for the forthcoming Super Bowl, where she performed a rousing rendition of the national anthem. “He’s doing her hair color, and that’ll get her ready for me.”

With knowledge of Gibson’s prowess for styling tresses, however, upon first meeting him you could easily be fooled into thinking you’ve got the wrong guy. Standing at 6 foot 3, he has a physique more resemblant of an American footballer than a hairdresser. “It’s true,” he tells me. “Generally people think I’m the bodyguard. It’s only when I pull out a can of hairspray and a brush that they’re like, ‘Okay, got it.’”

So how did an army child like Gibson find his way into such a career? “As a kid I used to paint a lot, so I was always an artistic individual.” The creative streak lay dormant until some years later, at the age of 21. “There was a good friend of mine in Austin that was a hairdresser. He drove a really great car, had a fantastic apartment and was very successful”. Inspired, and after a few drinks that New Year’s Eve, Gibson told him he’d love to become a hairdresser too. “He told me I’d be great at it and, the next thing I knew, I was in school and loved it.” 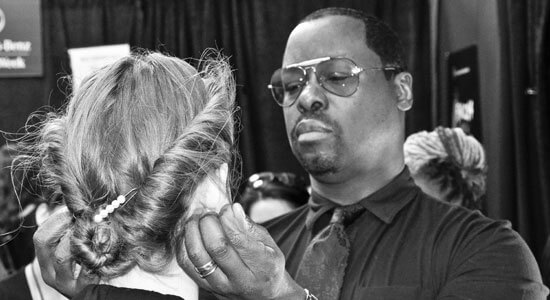 Back then, Gibson might not have imagined that one day he’d have one salon on Fifth Avenue, located right opposite the Flatiron building, and another on the beach at Fort Lauderdale in Florida. He probably also didn’t foresee being America’s stylist to the stars: counting names including Angelina Jolie, Mila Kunis and Gabrielle Union among his clients. “I’m very busy – I might be doing editorial [hair styling for photo shoots or fashion shows] one day, Tina Fey for a L’Oreal commercial the next, then Deborah Messing for the press for her new show.” I probe Gibson for some revelatory celebrity anecdotes, but ensue his wrath. Customers’ discretion, no matter their fame, is one of his main principles.

Despite the star-studded clientele, at the heart of what Gibson has always sought to achieve in his salons is something more than just giving a great haircut. The mantra at his salons is about inclusivity; making the clients feel a million dollars. “It’s really all about individual beauty. My tagline is ‘Beauty is Individual’. For me, I’ve always been proud to be able to help a woman discover how beautiful she is. It doesn’t matter whether she’s a size two or a size 24, there is always something that’s really beautiful about her. So it’s my job to help her discover that, as well as to help bring that out in her.”

Part of this philosophy is seen in the way that Gibson attends to every single aspect of the haircut himself. “For me, it’s all about the five-star luxury experience. If you go to a lot of namesake salons that are high-end around the globe, what often happens is that you’re passed off to five different people.

“I think that, if a woman’s paying over $1000 for a haircut, she’s paying for the experience. She’s paying to be able to have me, essentially. She’s seen me in the New York Times, on Good Morning America or the Today show so she wants to have that same person who’s tended to Angelina Jolie and Gabrielle Union. She wants as much time as possible, which is why I spend about an hour and fifteen minutes with each guest.”

Throughout the experience, Gibson does his own shampoos, a unique stress relieving experience and massage, as well as the cut and blow dry. “It’s a full 360 service in the respect that it is very high-end, it is very luxury, but it’s not stuffy at all.” It’s the scope of the service offered that means so many clients are ready to spend over $1000 on the experience.

2015 is set to be busy – the Oscars are coming and he’ll be launching the new Ted Gibson Hair Care range later in the year, with innovative hair products. They’re looking to expand into new markets – a new salon in west London could be in the pipeline. One of the projects Gibson’s most excited about is the new partnership with TRULY. From a full-works haircut with Gibson himself, including exclusive extras, to haircut and coloring with Gibson and Backe, he’s excited to be venturing into new territory. “This is a great time for the brand, and we’re delighted to be working with TRULY.”

Gibson’s attitude to helping people discover their inner-beauty was seen widely in his role on ‘What Not to Wear’. Perhaps most famously, he coaxed one guest, Frances Ruiz, into sharing why, at age 28, she had never been kissed. On the show, Gibson asked Ruiz, “What is it that’s hindering you from being your greater self?” She told him she didn’t want to cry on live TV; it was embarrassing. “You are an amazing human being,” Gibson told her, “What’s wrong with showing the world that?”

“Frances was great. She was a little uncertain and she lacked a little confidence. As a beauty guru and someone who really loves women, and helping them find themselves, I think I was able to help her with these things.”

Since that show, Ruiz has gone on to find fulfilment, publishing a number of fantasy and sci-fi novels. For Ted Gibson, she’s another satisfied customer and that, to him, is what his job is all about.