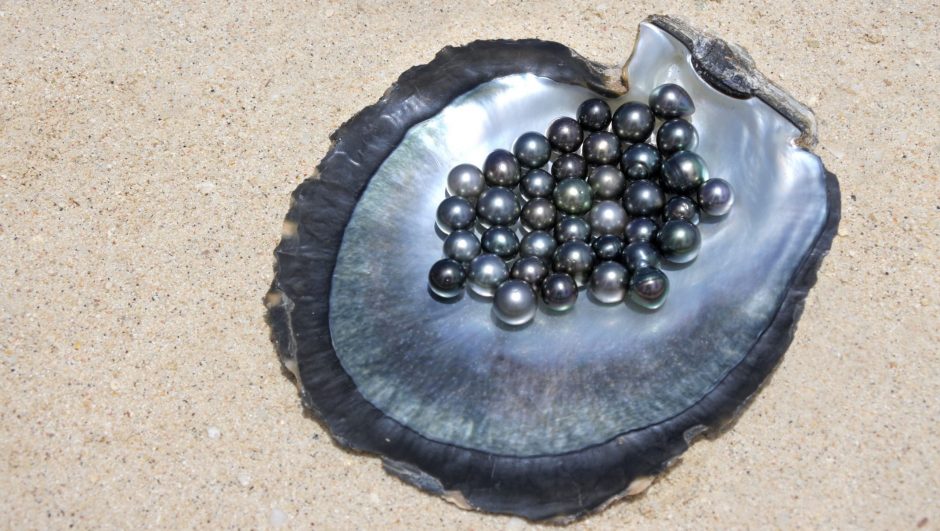 Tahitian black pearls are an exotic and exquisite beauty from the depths of the ocean that have captured the human world by storm. They are quite new to the world of modern jewelry, only finding their way into pop culture in the mid-1900s. These mysterious black pearls hail from the clutches of the Pinctada Margaritifera, or more commonly known as the Black-Lip Pearl Oyster.

These magical creations are generally seen to be only black in color. But when you look closely and watch them shimmer in the light, you’ll see there can be other color variations too. There can be greens, blues, copper, and deep purples that show up in the black beauties.

What Are Tahitian Pearls? 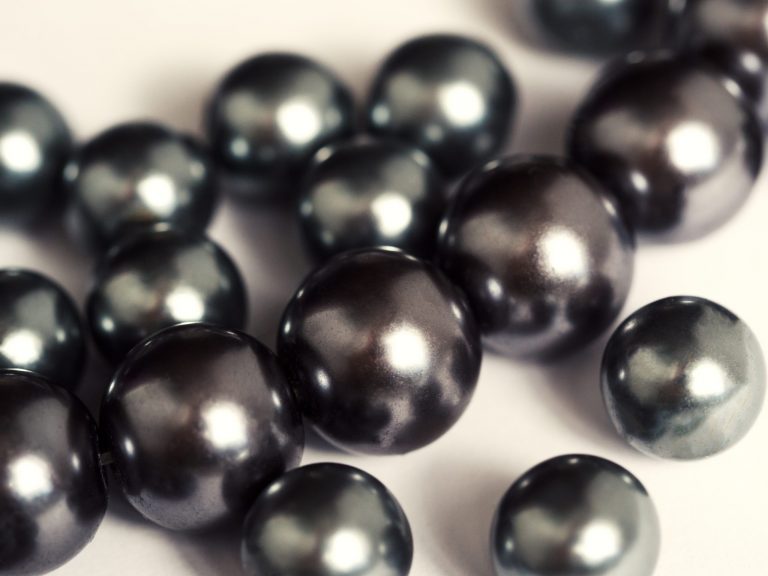 The Tahitian pearl is actually classified as a gem. As mentioned above, Tahitian pearls come from a variety of bivalve molluscs. These unique black gems take about two years to fully mature before being ready to harvest.

The shape of a Tahitian pearl is determined by the amount of time it stays under the water for. There is lots of sand and water friction involved in the process of creating a pearl, so the more sand interference or water friction in the pearl’s creation, the more of a variation there will be in the shape.

What Do Tahitian Pearls Symbolise?

The symbolic nature of the Tahitian black pearl is quite mysterious. There are varying opinions as to what the true symbolism is for these unique gems.

Some legends say that the Tahitian black pearl is a symbol of hope for the broken-hearted. Others say they can heal anyone of any ailment and dispel the wearer of any negative energy. These stunning pearls were only ever worn by nobles and royals because of their immense value and because of how rare and exotic they used to be.

Even though they are still considered to be rare and valuable, they are now cultivated on man-made farms, so the market has more pearls than ever before.

Where Do Tahitian Pearls Come From?

Contrary to their name, Tahitian pearls actually do not come from Tahiti.

What are Cultured Pearls? Difference Between Cultured & Natural Pearls

So, where do pearls come from with this name?

Tahitian pearls fall into the A-AAA Grading System, which translates into an A–D grading scale system that Tahitian pearl farmers use to evaluate their pearls.

Below are the 5 factors considered when farmers and jewellers are trying to determine where a pearl is on the A–AAA Grading System:

How To Choose Tahitian Pearls

It’s not always easy or simple to make sure you are choosing the right pearl.

The first thing to check for is to make sure it has a good commercial quality. This means finding out which category it falls into in the grading system mentioned in the paragraph above.

At the end of the day, the most determining factor is that of the pearl’s beauty. This will ultimately determine the value of the pearl. Due to its high expense, when choosing a Tahitian pearl, we suggest finding one with the best price-to-quality-to-value ratio.

Why Are Tahitian Pearls Black? 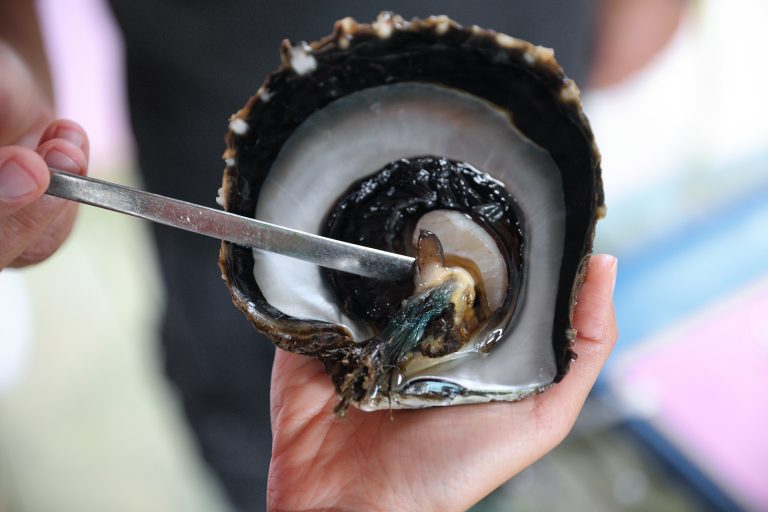 Tahitian black-lipped Pinctada Margaritifera oyster is the only type of oyster to form the Tahitian pearl. This process occurs when a grain of sand gets trapped inside the shell. The interior layer of the shell is called nacre, for the majority of oyster shells, this nacre is an iridescent white or silver. But the Pinctada Margaritifera has a unique thick nacre that is pitch black.

Pearls that are formed near to the inner shell are darker, while those formed further away are a lighter grey or silver. If an oyster that usually produces white pearls has a unique black coloring in its nacre, this can create a very unusual looking pearl with white and black coloring. This, however, is rare and it only occurs in one in 10,000 pearls.

How Do You Clean Tahitian Pearls?

Cleaning any type of pearl can be a tricky business, the most important thing to remember is how soft and easily damageable they are. The best way to clean your Tahitian pearls is with lint-free soft cloth. You can also gently bathe them in water for no longer than a minute, then dry them with a lint-free soft cloth. It’s also good to remember to store them away from all other jewelry to prevent scratching and scuffing.

How Much Should Tahitian Pearls Cost?

As I’m sure you’ve gathered by now, Tahiti pearls are precious and valuable. A small pearl of average quality goes for around £75.00. A round, perfect, high grade quality pearl of 18mm in diameter will cost around £7,500.00.

Are Tahitian Pearls Worth Buying?

Once upon a time, Tahitian pearls were considered to be the rarest and most valuable cultured pearls in the whole world. They are still the pearls with the most intrigue and value, but the pearl farming market has brought them down in rank in terms of rarity and value. Tahitian pearls are now affordable to a much wider demographic.

They are absolutely worth buying if the black pearl look is what you desire and you can afford it. But it’s important to keep in mind that they are not as unique as they used to be. As with anything that starts getting mass-produced, the quality becomes questionable, but if you can find the right supplier and the right market, then go for it!

Where To Buy Tahitian Pearls Online?

There are plenty of places to buy Tahitian Pearls online. From specialty online shops to online giants like Amazon.

Our recommendation is to browse Amazon first to get a sense of prices, variety and quality. Then do a detailed comparison online.

For instance, The Pearl Source on Amazon has a good selection of genuine pearl jewelry to give you some starting ideas.

How To Tell If Tahitian Pearls Are Real

You don’t need to be an expert on pearls to spot the difference between real and fake Tahitian pearls. You can find legitimate Tahitian pearls that have come out of the oyster with no imperfections seen to the naked eye, but these are extremely rare and very difficult to come by.

Almost all Tahitian pearls have some kind of imperfection or irregularity. Whereas fake Tahitian pearls are often sold looking perfect, smooth and tend to have a perfectly spherical surface. Another tell-tale sign of a fake is it will look like it has a matte finish under the light. The real deal will always shimmer and reflect under any light.

One other way to detect a fake is looking at the drill holes in the pearls if on a necklace or a bracelet. Real pearls will show a rough finish or unevenness around the drill site, whereas the drill holes on a fake pearl will look perfect and precise.

If you are unsure or feeling hesitant in any way, best to call in a professional eye before you finalise the purchase.

Can You Get Tahitian Pearls Wet?

It is definitely not recommended that you get your pearls wet. They can handle small amounts of water for short periods of time, like for a quick cleaning for example. But wearing them into the bath, shower, hot tub, swimming pool or ocean has the potential to damage them.

They may come from underwater, but once string, they shouldn’t go back there!