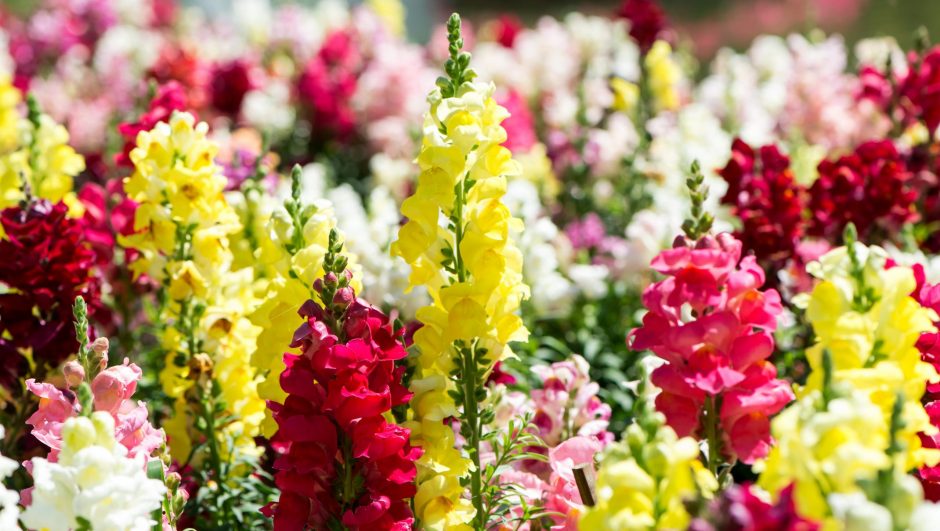 Snapdragons are the tropical bird of the flower kingdom. Also known by their scientific name of Antirrhinum majus, which means “like a snout”, the plant’s name derives from the fact that they look like a dragon’s face. When you pinch the “jaw” of the two-lipped, tubular blossom on the sides, it will open and snap shut again like a hairy dragon’s mouth.

These flowers rely on bumblebees for their pollination because they are snapped tightly shut, and as a result, require more pressure to open than a honeybee has on its own. These stunning blooms are available in almost every hue and stand tall, proud and bright in any garden.

Now you know a few fascinating facts about snapdragons, find out how you can grow your own at home!

How to Grow Snapdragons 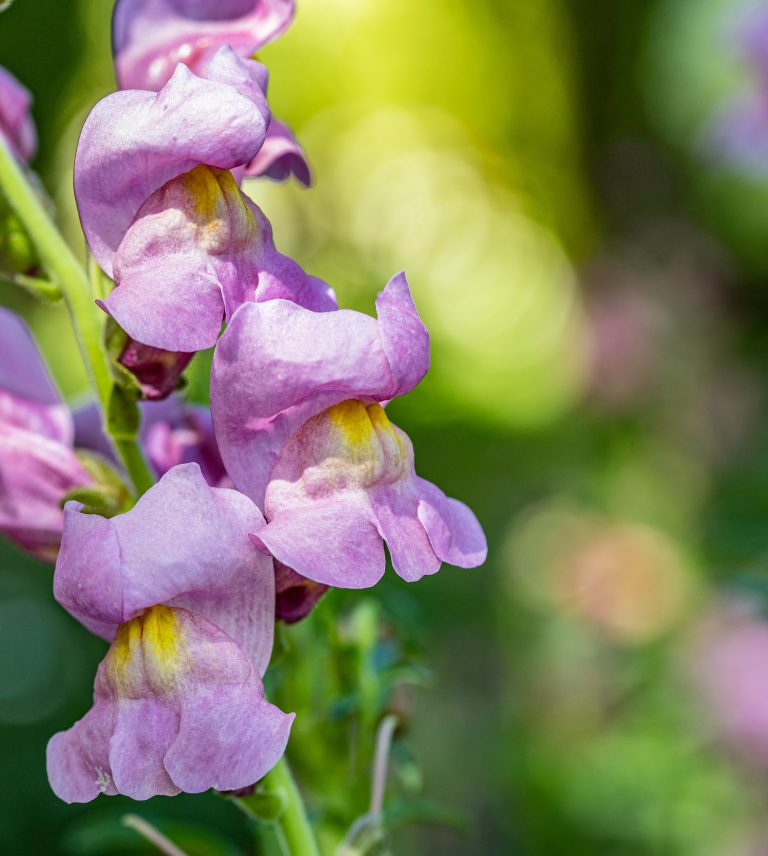 Snapdragons are relatively low maintenance which makes them ideal for beginner gardeners. They blossom in a wide array of colours and at varying heights so can be planted in numerous different formations too. These flowers do best in colder climates and are considered to be tender perennials as they’re not very hardy.

Do Snapdragons come back every year?

Snapdragons can bloom numerous times throughout the season but perform best in the cooler months of spring, autumn, and even the milder months of winter. The plant’s bloom cycle can be extended by deadheading.

The snapdragon plant forms seed pods in its first year and occasionally may self-sow. However, these plants are known to be affected by numerous diseases including botrytis, rust, powdery mildew, damping off and bacterial leaf spot. They are also susceptible to pests like aphids, leaf miners, cutworms, cyclamen mites and spider mites.

Are snapdragons full sun or shade?

Snapdragons bloom best in full sun to partial shade during the springtime. As soon as the temperature starts to rise, these bright blossoms may stop blooming entirely.

By planting them in partial shade and keeping them well watered, you can help your snapdragon plants make it through the hot summer months, so that come autumn, they may bloom again.

It must be mentioned that snapdragon plants are quickly established once planted, so it may be just as easy to replace them each season!

What is the Meaning of Tulips? Symbolism Behind Coloured Tulip Flowers

How much water do snapdragons need?

To keep snapdragon plants happy, they need a fair bit of watering.

When you start growing your snapdragon plant, ensure it stays wet for the first few weeks. Once it has settled in the ground and established, the plant will require about an inch of water every week when there is no rainfall.

Be sure to water the plant near its crown and avoid overhead watering to ensure the snapdragon stays healthy. As soon as the plant is established, allow the soil to dry about an inch deep before watering it again.

What about soil & fertiliser?

Snapdragons thrive best in neutral soil with a pH anywhere between 6.2 and 7.0. Because they are short-lived blossoms, they aren’t heavy feeders. However, adding organic matter will go a long way in helping them stay healthy and ensuring they bloom.

When your snapdragon first starts producing flowers, be sure to add fertiliser to the soil around the base of the plant. A standard, well-balanced all-purpose fertiliser will work best.

Make sure that the snapdragons are then watered well to reduce the plants’ risk of nitrogen burns, and to ensure the fertiliser reaches their roots.

As mentioned, snapdragon plants much prefer cooler temperatures to warmer ones. Once they are established in their soil beds and have hardened off, these plants can withstand sub-freezing temperatures, as long as they are well-watered.

By covering snapdragons with a layer of pine straw mulch when it gets very chilly, you can ensure your plant lasts for quite some time. 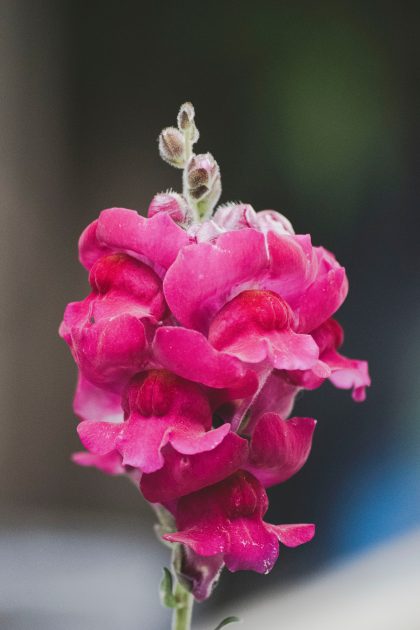 Snapdragons can be winter sown, which means that the seeds can be planted in late autumn. Make sure the seeds are sown directly onto the soil and not on top of a layer of frost. Your seeds can be sown in your garden a few weeks prior to the season’s last expected frost.

Most snapdragon plants are started indoors about eight to ten weeks before the last frost. You can either grow them from cuttings or are buy them as seedlings. If you’re starting them from seed, simply press the seed onto the surface of the potting soil.

Wedding Anniversary Flowers By Year: What Flowers Should You Give?

To germinate, snapdragons need light. Use plant lights placed at about two inches above the seedlings for roughly 16 hours every day. As the seedlings grow, move the light higher.

Once the seedlings have developed six true leaves, pinch the top of the stem off, as this will encourage branching and bushiness. Transplant your snapdragons outdoors a few weeks before the last expected frost fall – these plants can handle one or two light frosts.

How to Care for Snapdragons

Once established in their soil beds and thriving, snapdragon plants are relatively easy to care for.

To keep your snapdragon plants blooming for longer, regular deadheading is key. These plants don’t require as much care in the early days of spring but adding mulch will go a long way to keeping the soil cool and moist.

If you’re growing taller varieties of the plant, plant them six to 12 inches apart to avoid the spread of diseases and create good airflow.

Given the fact that snapdragon plants are tender perennials, they may die off in climates that are too cold. However, if they do survive the winter months, prune them back by about a third to encourage new growth.

Snapdragons do tend to go downhill after their first year, so for the best results, it’s a good idea to start fresh every spring. Many varieties of snapdragon tend to self-seed and then grow back on their own. However, they are likely to be hybrids and will not always look the same as the original plants.

The spiky, bright-coloured flower stalks of snapdragons make for a nice foil for the cooler shades of most spring flowers. When planted in clusters, snapdragons can help a border transition from spring’s ephemerals to peak hot season.

Pale yellow varieties of snapdragon are easiest to blend into mixed landscaping borders. They work nicely with other bright colours in the garden, such as pinks, purples and reds. The varied bright colours of snapdragons also make the plant an excellent addition as a filler to any garden in the form of containers or baskets.

16 Beautiful Ranunculus Varieties For You to Grow

According to the language of flowers, snapdragons carry both positive and negative meanings. On the one hand, the flower represents deception and concealment, based on the way they are tightly shut and require pressure to open. They’re also associated with deviousness, similar to the mythical creature they resemble.

On the other hand, snapdragons symbolise grace under pressure and inner strength in trying circumstances, due to its ability to grow in rocky areas. Legend has it that concealing a snapdragon makes a person appear charming and cordial.

A stunning plant with delicate yet vibrant flowers, snapdragons take your garden from drab to dramatic with ease – a sure recipe for happiness if ever there was one! These low maintenance plants are ideal for any garden, big or small, and look fantastic in vases and bouquets too. They’re dramatic yet easy to grow, so they really are the best of both!