Blog » Luxury Lifestyle » Showcase Cars: All About the Ferrari 458 Spider 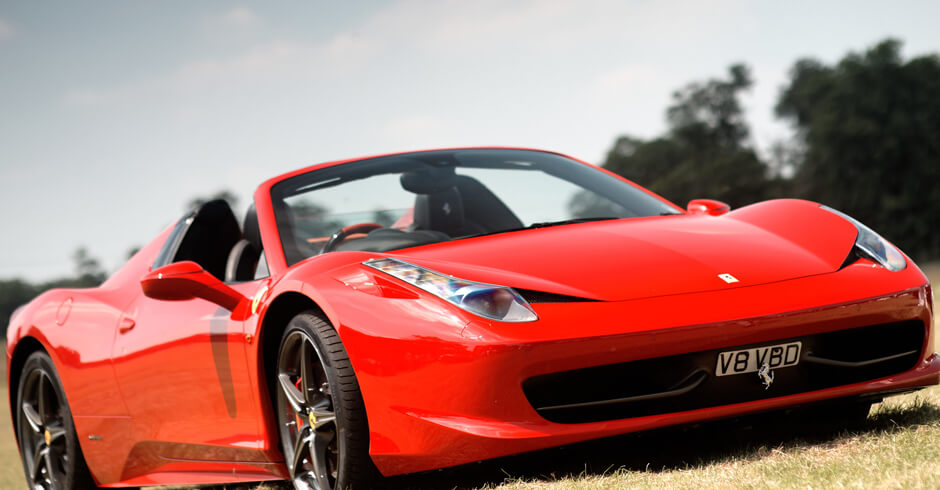 There have always been concerns when a much revered car is re-packaged as a convertible; these stem from questions over the rigidity of the car when it ‘loses’ its roof and the subsequent change in performance. Although car makers have been, in recent years, getting better at dealing with this problem, many could have been forgiven for questioning Ferrari when they launched the 458 Spider – a hardtop convertible based on the outstanding 458 Italia coupe.

Under the surface, under the bonnet really, nothing has changed from the Italia to the Spider. Both are powered by a 4.5 litre, V8 engine which is relayed to the wheels by a 7-speed clutch – a dual automated-manual one at that. With 562hp, the 458 in either guise rockets to 62mph in 3.4 seconds.

So, let us address the burning issue – does removing the roof and replacing it with a folding roof negatively impact the performance? As well as the rigidity, Ferrari had the additional problem of solving where the roof would fold away, as the engine is where most convertible roofs are normally hidden. They approached both issues with typical style and precision.

By using an aluminium roof Ferrari ensured weight was saved when compared to a more traditional cloth roof – about 55 lbs in total, actually. This also allowed them to stow the roof just in front of the engine bay and even allowed Ferrari to build a small luggage bench behind the front seats – quite a feat of engineering. They also addressed comfort in the cockpit with the roof down by adding an electric windstop to keep air and noise out. With these changes Ferrari believes that either with the roof up or down, the car not only offers the same rigidity but also performs the much the same.

Also see  Inside Cornelia Spa at The Surrey

The use of aluminium has also been carried into the car’s chassis, making it more lightweight, and with an electronic rear differential, the power is well balanced to deliver maximum traction. What Ferrari have done under the car is perhaps less surprising than how they have packaged it. The 458 Spider is made up of flowing lines and diverse shapes. It has a number of ‘quirks’ in the cockpit, including instrument clusters which only show navigation or speed – not both at the same time.

The important things, like the driving position, are as refined as ever, and instrument issues aside, this is a wonderful conversion to a convertible. As is the trend these days, there are a number of ‘special’ 458 Spider models available including the 458 Speciale Aperta. The Speciale is lighter than the standard 458 Spider and offers an upgraded engine to churn out 605hp.

The Ferrari 458 Spider has no shortage of competitors though, with the Aston Martin Vanquish Volante heading the pack, ably backed-up by the Porsche 911 Cabriolet. However, the 458 Spider does nothing to diminish the legacy of the 458 Italia, and no finer compliment can be paid than that.