Blog » Luxury Lifestyle » Cars, Motorbikes and Driving » Showcase Cars: All About the Morgan Plus 4

There may not be another driving experience like it. In this day and age of mass production, carbon fibre bodies and cars bursting at the seams with modern technology, the Morgan Plus 4 harks back to a simpler, purer, driving experience.

People fall out of love with driving because of computers controlling their driving, clever gear boxes dictating changes and braking systems removing the need for any skill or judgement. Driving this vehicle might just restore your love of driving. Find out all about the Morgan Plus 4 in the words that follow.

The History of Morgan

Established in 1909 by H.F.S. Morgan, the first car to roll off their hand-built assembly line was actually a three-wheeler. This model used a very simple principle – by fitting a motorcycle engine and a simple transmission to a lightweight chassis, Morgan realised he had developed something unique. Renowned in its day for engineering and reliability, the three-wheeler sustained the Morgan firm for the next 27 years.

So, in 1936, just before the dawn of the Second World War, that Morgan began production of their first four-wheeled model. The 4-4, as it was known due to the 4 wheels and 4 cylinder engine. Mindful of their origins, Morgan made sure the bodywork retained the weight needed for a sports car by using an ash frame, concealed in a steel body. It was an immediate success and a coupé followed a mere two years later.

With new models being built and racing successes on the track, Morgan went from strength to strength. In fact it would not be until 1950 that the Morgan Plus 4 would be first introduced, as a more powerful and longer version of the 4-4. On its debut it displayed a 2088cc engine with an improved chassis and hydraulic brakes – a first for the company. Due to its success, the Plus 4 stayed in production until 1969, when it was discontinued to much outrage. It would not be seen again until 1985.

After another fifteen year run, in 2000 the Plus 4 was again dropped from production. Within five years, Morgan realised that actually the Plus 4 provided a much needed offer to sit in between their 4-4 and Plus 8 models. So in 2005 it was brought back and has remained in production to this very day. 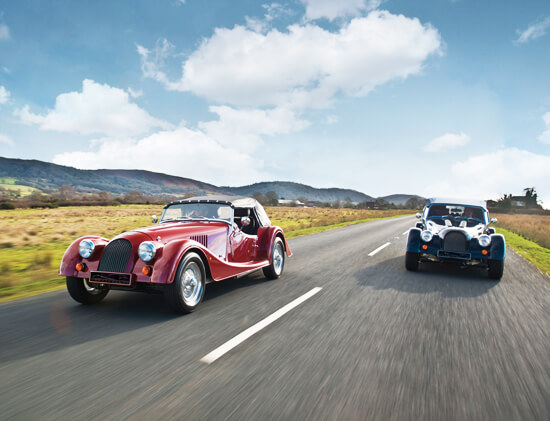 Throughout the years, since their inception, Morgan has kept to the original ethos established by H.F.S Morgan – all cars are coach built and subjected to rigorous tests to maintain exacting standards of quality and performance. Although Morgan only product 1300 cars a year they are highly sought after as a piece of quintessential England.

The Plus 4 is promoted by Morgan as ‘the world’s favourite Morgan’ and it isn’t difficult to see why. It is an intoxicating mix of a four cylinder engine which provides plenty of torque with the traditions of the Morgan sports car.

Just a simple tap on the accelerator and the 1999cc engine roars into life, propelling you up to 62mph in just over seven seconds. With the roof down, the wind rushing through your hair and the sun on your face, the magnificent Morgan Plus 4 will take you all the way to 118mph – if you’re on a race track, that is!

Designed and built to traditional Morgan standards of excellence, this means you are behind the wheel of a well-balanced and responsive machine. Point the nose into corners and guide the car though with no ABS or anti-lock brakes to detract from the joyous, pure, driving experience.

Of course, we have barely touched on the fact that the Morgan is a convertible. This is an easily operated roof system and, as with almost every aspect of a Morgan, it is available with a wide range of options. These include various road wheel designs, luggage racks and a whole rainbow of colour options.

There is a certain nostalgia climbing into the cockpit of a Morgan Plus 4; an almost familiar feeling that one cannot put a finger on – it is like an old friend. Whatever car you drive in your daily life, your heart cannot be failed to be moved when you drive a Morgan.

It is driving in its base form, there is no gadgetry to correct your mistakes and you can feel every bump and dip through the steering wheel. With room for a passenger and an overnight bag the Plus 4 is the ideal car for a long weekend driving through the British countryside.

Be it on a midsummer’s day with the sun shining or in the brisk chill of the early autumnal air, there is no finer car to drive through the ‘green, green grass’ of Britain. If you want to experience this for yourself then the opportunity is there for you, just don’t blame us if you end up falling in love with it…

Indulge in the Ultimate Morgan Experience