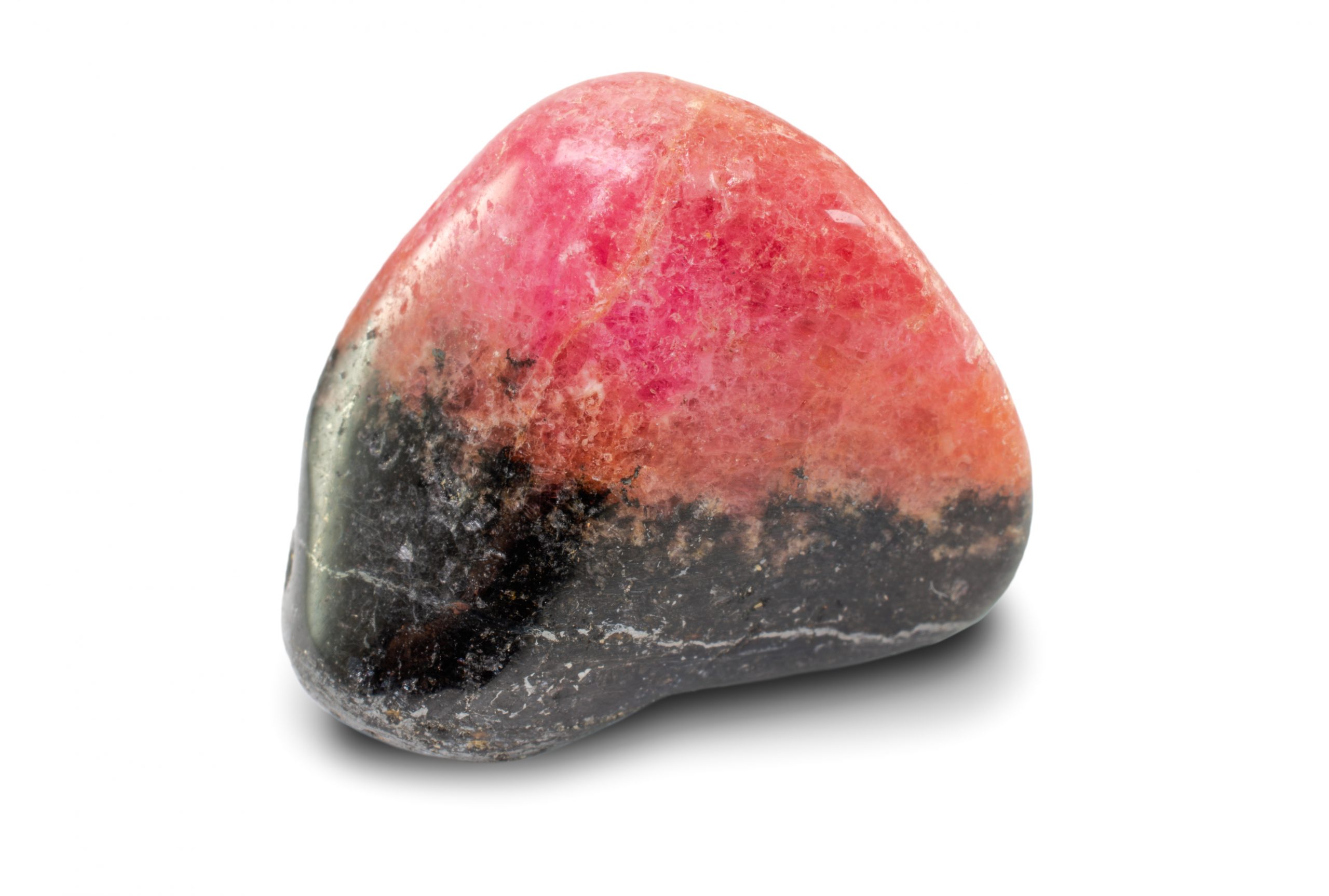 Since the turn of the century, the popularity of crystals has been on the rise.

What used to be somewhat of a fringe interest that was chalked up to superstition and ‘witchcraft’ is now incorporated into the beliefs and practices of many mainstream cultures.

Crystals such as rhodonite are believed to possess potent energetic healing properties. They’re utilised in alternative therapeutic practices and are purchased by millions of individuals who have a keen interest in either their aesthetic or their promised power as restorative tools.

If rhodonite is on your radar (or is now!) read on to find out more about this phenomenal pink crystal. 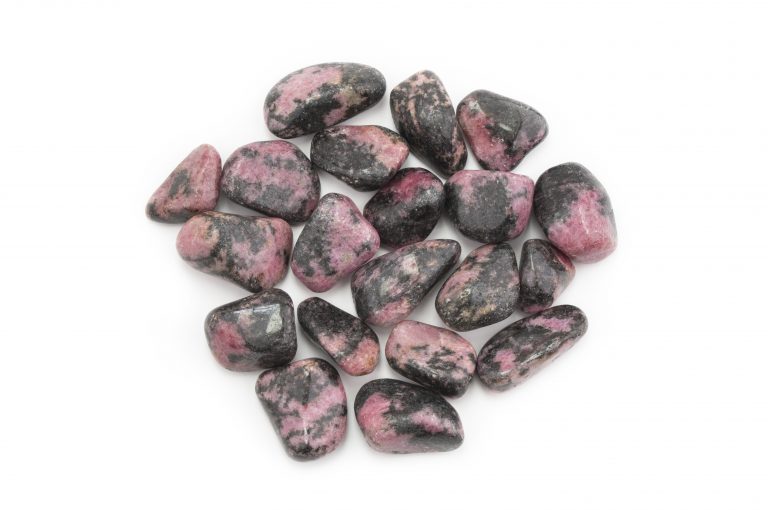 The rhodonite crystal is commonly referred to as the “rescue crystal”. It is a silicate of manganese that measures 5 or 6 on the Mohs hardness scale. Rhodonite has been praised for its capacity to fill both your heart and soul with feelings of love, affection, and connection.

The rhodonite stone was originally unearthed in the 1790s in the Ural Mountains of Russia. Since then, this exquisite pink crystal has been discovered in Madagascar, South Africa, Australia, Brazil, Canada, the USA, India, and Sweden.

A rhodonite crystal typically presents as masses of rose, pink or red with dark brown or black vein-like lines dancing across the surface. Pink rhodonite is one of the pink gemstones that are known to be highly effective in maintaining balanced energy levels and assisting you in the pursuit of fulfilling your potential.

What is the Meaning of Rhodonite?

The name of the rhodonite crystal is derived from the Greek word “rhodon” which means rose-red.

Pink is symbolic of deep and unconditional love. The sharp juxtaposition of the light pink rhodonite stone and the dark swirls that decorate its surface allows for a powerful invocation of feelings of love.

People often describe the rhodonite stone as a sort of pink marble. This adequately captures its simultaneously ethereal and grounding nature.

What are the Healing Properties of Rhodonite?

Many people have discovered that the rhodonite crystal has a profound ability to soothe matters of the heart. This is because, like most pink crystals, rhodonite is connected to the heart chakra.

When you heal emotional wounds, you allow yourself to be open to unconditional love while also embodying it.  Rhodonite crystals can assist in letting down your emotional guard following a trauma that may have caused you to become unreceptive to love. All of these emotions are closely related to feelings of self-esteem.

When you are able to love more freely while also accepting the love of others you ultimately bolster your sense of self-esteem. This creates a positive feedback loop that will allow your life to overflow with an abundance of joyous connection and affection.

You might struggle to love and accept yourself if you have experienced abandonment or disappointment in a close relationship at some point in your life. Rhodonite functions as a helping hand in the journey of establishing mutually respective and compassionate connections.

What is Rhodonite Used For? 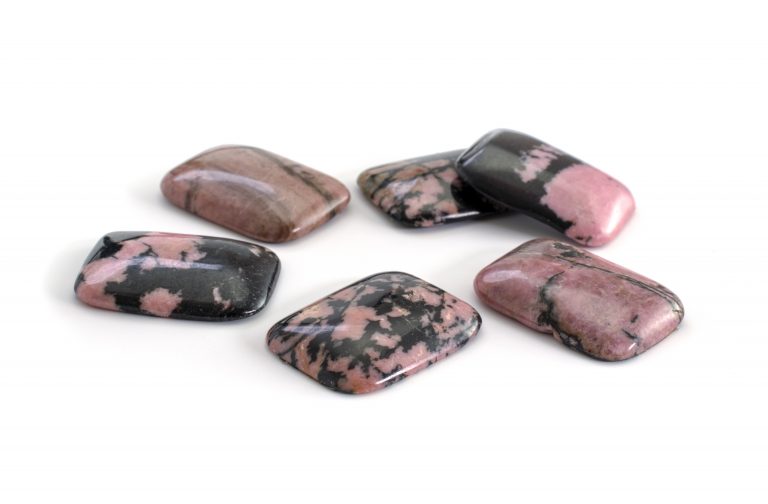 As has been previously mentioned, the rhodonite crystal heals intimate matters of the heart. It dissolves the negative emotions that might arise from traumatic experiences and promotes feelings of compassion and self-love. Rhodonite does, however, have a multitude of physical uses too.

The rhodonite crystal possesses subtly effective physical healing properties. While its associated benefits are primarily emotional, spiritual and metaphysical, this crystal is said to be energetically uplifting in a very real way. It gives you reserves of previously untapped strength that you can draw upon to feel physically sustained and gently invigorated. Rhodonite’s connection with the heart and circulatory system further enhances these feelings of rejuvenation.

It is also believed to aid in the growth of strong bones and teeth while caring for the wellbeing of hearing-related organs and mechanisms. Individuals or couples that are trying to conceive have been known to turn to this crystal as it promotes fertility. Furthermore, rhodonite could potentially treat the symptoms of auto-immune diseases and stomach ulcers while also soothing inflamed joints.

How to Cleanse Rhodonite

Cleansing your crystals is an incredibly sacred and restorative process. It is a means of resetting your crystals so that they are able to further serve you in your emotional and spiritual journey of self-growth and self-discovery. There are a few ways in which this can be done. It should be noted that not all crystals can be washed in water. Rhodonite is one such stone. In fact, if you place this precious crystal in water it may dissolve.

The full moon is an excellent opportunity for recharging both your soul and the innate energies of your crystals. As you employ your crystals for healing purposes, they absorb negative energies while also storing their own positive energies. Placing your rhodonite stone outside under the full moon or on a windowsill allows for a rebalancing of this yin and yang.

If the next full moon is simply too far away, you can also smudge your rhodonite. This entails lighting some palo santo or a sage stick and hovering this around the crystal while setting the intention for it to be absolved from negative energies and replenished with positive forces. You may also choose to bury your crystals underground for a minimum of 24 hours. The earth will naturally absorb and dispose of unwanted energies.

Believe it or not, you can actually use crystals to cleanse other crystals. Placing your rhodonite on a selenite tower can reset its energy.

What is the Difference Between Rhodochrosite and Rhodonite?

A rhodonite stone is frequently mistaken for a rhodochrosite. There is, however, a rather clear physical difference. Rhodochrosite is typically light-pink with white Manganese Carbonate swirls while rhodonite is darker in colour with near-black swirls.

Both crystals target the heart chakra and promote feelings of love for others, love for self, and an openness to attracting new love into your life.

Rhodonite is more of an ‘earthy’ crystal. This means it has a greater capacity for restoring vitality, whereas rhodochrosite is far gentler and perhaps less effective in this regard.

Adding rhodonite to your life offers many benefits. Even if you’re not too interested in it’s properties, this pink crystal is wonderful to look at, and makes beautiful jewellery too.