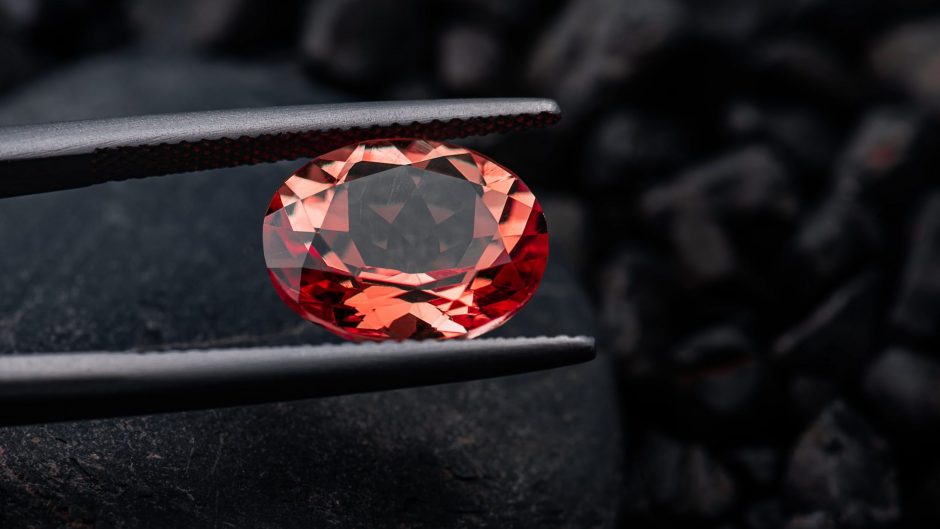 Red gemstones have long been associated with fire, passion, warmth and vitality. In China, red represents prosperity and joy. Brides traditionally wear the colour on the wedding day and local businesses paint their doors a shade of red to encourage good fortune.

In other cultures, it’s believed that red gemstones can give physical strengthen, boost motivation when you’re feeling down and recharge your mind, body and spirit. Red gemstones are also commonly associated with inspiration and a drive to move forward and push yourself to achieve your dreams.

If you, like many others all over the world, have always felt a pull to red gemstones, then take a look at our guide. We’ve listed the names of red gemstones, their meanings and any special occasions associated with them. 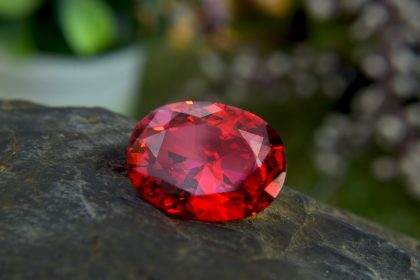 When it comes to red gemstones, rubies are the most famous of all. Dorothy in the Wizard of Oz with her magic ruby slippers have given them cult status, but even without this connection they’re exceptionally well known.

It’s easy to see why this stone is so popular – rubies can reach bright, vivid saturation and glow in the sunlight. This is due to the fluorescence found in the stone.

Essentially, rubies are gem-quality varieties of Corundum, a mineral that contains Chromium. The latter is an exceptionally rare element that turns the stone into its very memorable shade of red. As one of the world’s rarest gemstones, rubies often undergo heat treatment to further enhance the depth of their red tones.

Naturally occurring rubies can be quite pricey, which has given rise to lab-created stones of this kind. These can be produced quite quickly and inexpensively and have the same level of durability as the natural stones.

Interestingly, this stone has become so popular that the name ‘Ruby’ has been on global lists for most popular girls’ names for the past 200 years.

What is the meaning of ruby?

Cultures around the world have long considered rubies to be a stone of kings. The dark red gemstones are associated with passion, purity, and nobility. As a protective stone, rubies are said to bring happiness and passion into your life. By wearing a ruby ring or bracelet on your left hand, the side of the heart, the wearer is said to live peacefully under the protection of rubies.

Commonly associated with love and power, rubies are traditionally gifted on special occasions including: 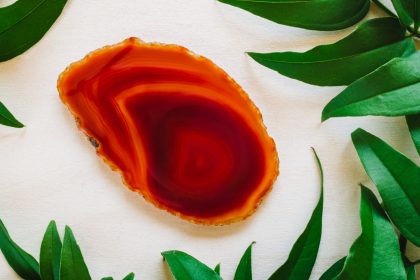 Red agate stones are popular all over the world for various reasons. Agate deposits are generally found in larger rocks, such as boulders. These stones take about 50 million years to form – so they certainly take their time!

Agate can be characterised by coloured circular patterns inside of rocks. It’s not uncommon for the stones to be found alongside amethyst deposits, as well as quartz-like crystals that occur in larger deposits.

What is the meaning of agate?

In Buddhism, agate is believed to be one of the religion’s seven treasures. As far back as ancient times, the stone has been used as an amulet. It’s generally regarded as ‘the stone of happiness’ and many believe that it can help strengthen love, as well as improve romantic relationships, thus boosting harmony. 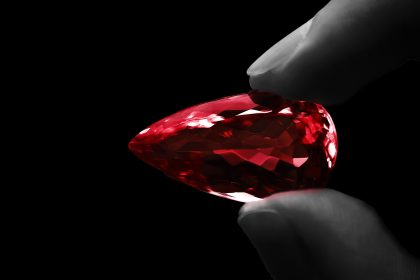 If you’re looking for rare red gemstones, then this is. Red diamonds are the most expensive and rarest diamond colour in the world, even more so than pink or blue diamonds. Only a few of these dazzling red gemstones have ever been found. Very few jewellery industry experts have ever been lucky enough to catch a glimpse of one of these shimmering blood-red stones.

Like other diamonds with a hint of colour to them, red diamonds can be either the purest form of red or mixed along with other colours including purple, orange and brown. Known as the ‘blood diamond’ (not to be confused with conflict diamonds, which are often called blood diamonds too) pure red diamonds are especially rare and precious.

The most famous red diamond ever discovered is The Moussaieff Red diamond. Weighing an impressive 5.11 carats, it’s medium red in colour. This is the largest red diamond in the world, and in 2001, it sold on auction for a whopping UD$ 8 million, which equates to roughly US$ 1.6 million per carat.

While manufactured diamonds are certainly not as prized or as valuable as naturally occurring ones, coloured diamonds, including red ones, are produced in Argyle in Australia. The area is famed for producing diamonds in a variety of colours, including pink, blue, purple and of course, red.

What is the meaning of a red diamond?

Because of their rarity and heavy price tag, red diamonds are a representation of commitment. Their vibrant red colour symbolises passion, power, love and strength. This makes them the perfect gemstone for a wedding or anniversary gift… if you can afford it! 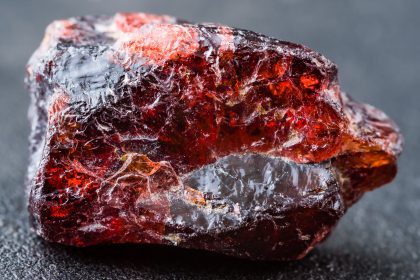 Another incredibly popular red gemstone is the garnet. However, unlike rubies, garnets are plentiful and affordable, no matter how big they are. These dark red gemstones are best known for their unique brown and red hues, but did you know that garnets can occur in almost every colour? It all depends on the stone’s exact chemistry.

Red garnets are also known as rhodolite. These stones are a varietal name for the rose-pink to bright red mineral called pyrope, which is a species of the group more commonly known as garnets. Garnets are most commonly produced in Argentina, Australia, South Africa, Brazil, Arizona, Switzerland, Scotland and Tanzania.

What is the meaning of garnet?

In ancient Egypt, garnets were cherished by Egyptian pharaohs. The stones were often buried in the tombs with them, so they could continue to enjoy their beauty in the afterlife. Ancient Romans also sealed all of their important documents with stamps made out of red garnets, so they have a long and illustrious history.

It’s thought that garnets can bring irresistible charm to the wearer, as well as attract a great deal of happiness, increase self-confidence and bring about love that’s eternal.

Additionally, garnets are one of the easiest stones to care for, as they are incredibly durable and can be cleaned using nothing more than warm, soapy water. 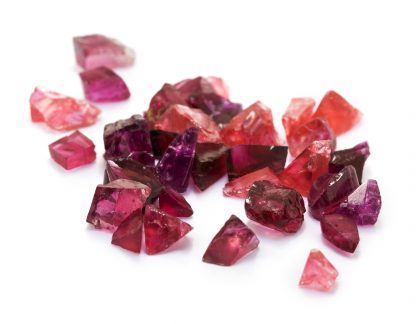 Known as ‘the rainbow that fell into the earth’, red tourmaline was discovered in 1500 by a Portuguese team of explorers in Brazil. The stones were found to glow with colourful neon lights. Red tourmaline is a favourite of jewellers, as these stones are both beautiful and of great value.

Interestingly, tourmaline is thought to have the most striking colours of all gemstones. This is due to a very complex composition that includes iron, manganese, aluminium, lithium and magnesium, amongst other elements. The combination and quantity of each element present greatly affects the brightness of the stone.

What is the meaning of red tourmaline?

Red coloured tourmaline is bright and vivid, which is why it’s associated with happiness and cheerfulness. Many believe that the gemstone helps one expand their mind and their horizons. Red tourmaline allows you to receive and give love, which helps to heal emotional wounds. For quite some time, this stone was believed to be an effective cure for depression. 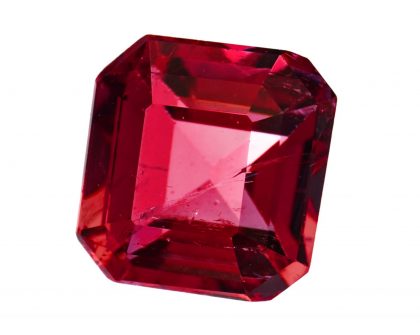 Red apatite gemstones are quite popular as the colour tends to be rather vibrant. As a result, these stones work well in the creation of striking jewellery pieces. As popular as the gemstone is, red apatite is quite rare. The stone has been compared to fine rubies because of its rich colour.

What could come as a surprise to many is the fact that apatite is composed of the same material as our teeth and bones – calcium phosphate. This makes it quite a soft stone compared to many others but is similar in hardness to the likes of an opal.

While most modern gemstones are treated with heat, red apatite is typically left untreated. While a red apatite stone is quite rare, it remains affordable compared to other rare gems. It can fetch a few hundred US dollars per carat, depending on the depth of its colour.

What is the meaning of red apatite?

While red apatite is not necessarily connected to any specific special occasion, it’s believed that the stone has special properties that help the wearer achieve their goals.

Many see red apatite as the stone of manifestation that helps one see things more clearly. The stone is thought to help us recognise any problems or hurdles affecting or preventing us from attaining goals. It’s believed that once this is realised, apatite can help you find the self-confidence to make any necessary changes to your life to move forward and achieve what you desire.

Furthermore, red apatite is thought to provide wearers with motivation, as well as to eliminate any negative or pessimistic feelings. 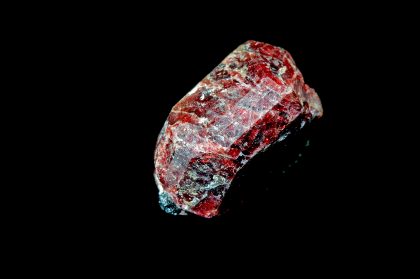 While incredibly beautiful, eudialyte stones are a little bit dangerous!

The red gemstone is quite rare, which is probably a good thing. It’s not advisable to wear one bigger than five carats in size as its mineral composition is actually radioactive.

In larger sizes, eudialyte could expose you to radiation that’s best avoided. Any gemstone enthusiasts who have this gorgeous red stone are advised to store it carefully as dangerous radon gas can build up in its storage space. Furthermore, the radiation that it emits is known to change the colours of other gems around it. It sounds rather magical, but it’s certainly a gem that needs to be handled with care.

What is the meaning of eudialyte?

Eudialyte derives its name from the Greek phrase eu dialytos, ‘eu’ meaning ‘well’ and ‘dialytos’ meaning ‘decomposable’, referring to its easy solubility in acids. It has the properties of vitalizing energy, and is said to give courage to its owner. Eudialyte is also a powerful protection stone that will keep the negative energies away.

Due to its radioactive nature, it’s not associated with any birthstone or special occasion, but this may be a good thing!

Red gemstones will forever be favoured by jewellers for their rich colours and associations with love, fire and passion. They make for an excellent focal point in any piece of jewellery as they add an extra level of depth and beauty. The colour red further elevates the allure of a gemstone and certainly makes a statement – particularly if the stone has a special meaning attached.

If you love all things red, then this guide should help you decide which stone you want to wear around your neck, on your finger or encircling your wrist.

If you love different coloured gemstones, have a look at the names, meanings and properties of other precious gems: