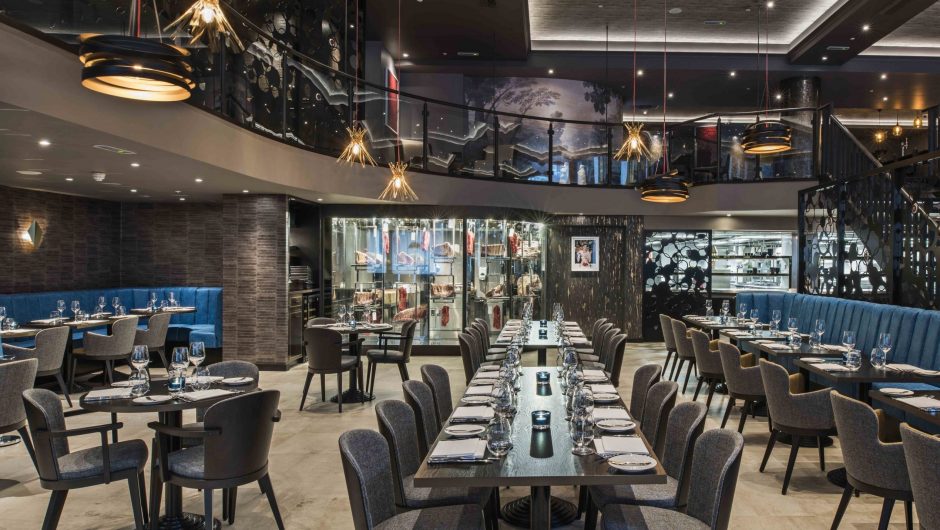 With extreme-aged beef from retired dairy cows hitting the headlines this year, we took the opportunity to visit one of London’s most glamorous steak restaurants — M on Threadneedle street. 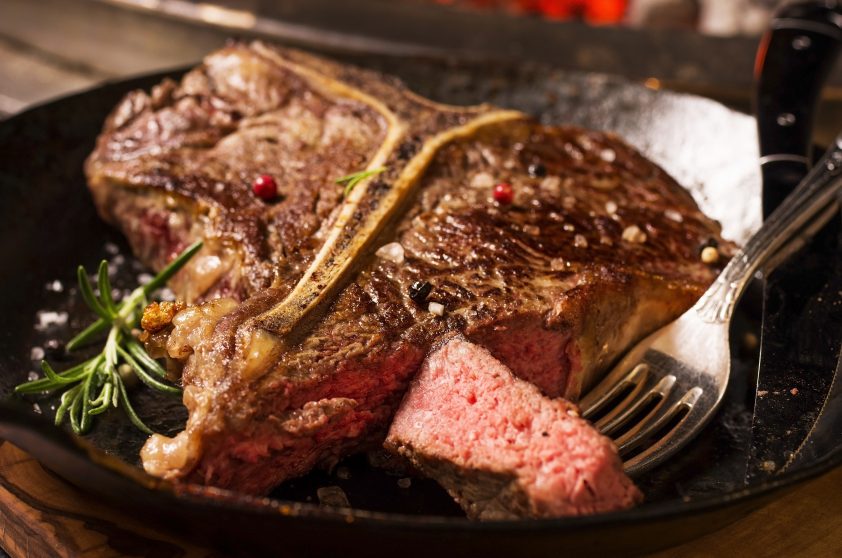 Culinary historians have suggested that love of steak was the reason man had to learn to control the most basic of elements — fire. The word steak is derived from Old Norse the term steikjo — ‘to roast on a spit’. This method of cooking that has been around as long as there have been flames to harness. Now, chefs are revisiting ancient techniques of flame grilling searching for meaty perfection.

“Our menu is ‘refined primal’.” These are the words of smiling Martin Williams — founder and CEO of M Restaurant on Threadneedle Street when I asked him about how the menu at M showcases the most primitive of foods.

As I look around the glitzy surroundings at the city’s hottest new restaurant, it’s hard to spot anything in particular a Neanderthal would identify with, save for the bull’s skull in one of the hidden private dining areas. I ask him to elaborate. “Forget the grilling over wood or the Josper oven for a minute. We still use elements like pickling and curing which are thousands of years old. The ceviches in the raw bar are a good example of that. You would have had ceviche in the world as long as fishermen have gone out in a boat with fishing pole and a lime. It’s interesting to see how everything old — raw foods, paleo, fermentation — has suddenly become fashionable.”

As Martin watches, hawk-like over the early diners, he has the relaxed air about him of somebody who has done this a thousand times before, but this venture is so much more than a simple restaurant. Split into two 100-cover venues — the Japanese- inspired ‘Raw’ and the more traditional ‘Grill’ — as well as a dedicated cocktail bar, it is fair to say that this is one of the most ambitious openings of the past few years.

A Cut Above the Rest

“What made me take on this project is that it allows me to showcase the best produce from around the world. We have a space that specialises in steak, rather than just a steak restaurant. It’s important to me that ‘M’ had a wider offering and that all of the dishes were top-notch; the demographic has become more discerning.”

Martin explains to me that what he believes separates M from other steak restaurants in London and beyond, “A love of fine, really high-quality ingredients. Whether it’s the tuna, our eggs, our steaks, the quality of our pork or the quality of our chickens, it’s all about trying to find the best in the world and bring it here to the restaurant. Similar to Zuma or La Petit Maison, we have particularly strong sourcing. We’re proud to share a lot of the same suppliers with them. Some our beef is only available to Heston Blumenthal, The Ledbury and us. And of course we’re the only people with access to this grade [10++/A5] Kobe beef in Europe. That’s the headline.”

When asked to share what he feels makes the perfect steak, Martin told me, “Husbandry and rearing — without that you’re nowhere — followed by stress- free slaughter and ageing of the carcass. Then make sure it’s transported with minimal adverse-effects. Butcher the meat well and then grill over the right medium; wood, charcoal or even just a cast iron skillet in some cases”

Something makes me think it’s not as simple as he makes it sound. “A lot can go wrong there”, he confesses. “If you try to cut your steaks as a decent butcher like ours does, you’ll probably end up with a rubbery piece of meat that’ll take you an age to get through. I’d recommend going to a top restaurant and leaving it to the pros. To achieve outstanding steaks at home, get your butcher to do the work. Pay attention to the sourcing, then you can keep it simple. The chefs have their toys, but the quality of the produce is what shines through on the plate.”

How Do You Take Yours? 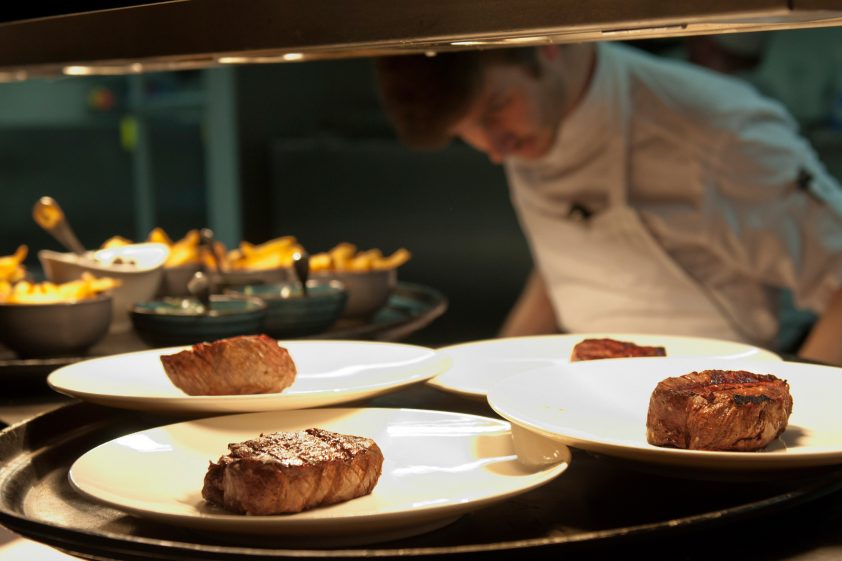 The big debate as far as animal husbandry is concerned is whether or not animals should be grass or grain-fed. “It depends: If you’ve got animals which will finish well on grass, like our [Belted] Galloways, the meat can be great provided you give them the time to develop. American-style grain-fed beef for the last 100 years is basically buttery veal; and it’s delicious, but a very different product to grass-fed.”

Most carnivores think they know how to order a steak; 28-day dry-aged, medium-rare. Get up to around the 40-day mark and we’re talking superlative sirloin, right? Well, for some chefs, enough never seems to be enough.

“For me, hanging is the equivalent of ageing cheese. If we look at the fat on an animal as milk; ageing takes it away from a fresh mozzarella to a parmesan. After a while, you just taste the fermentation and not the starting product. I like it somewhere in between, before the microorganisms take it too far from the source. At some point, you’re not really tasting the beef anymore. Older animals which are properly finished linger on the palate like a well aged wine.”

I picked his brain about how he sees the market changing, with ever-increasing competition on the London restaurant scene for great steak. “There is a shift happening on all the fundamental points”, he says. “Rearing, cutting and cooking, those are the big three points and there is controversy intertwined in all of them”. Echoing the words of Martin, he continues “But if you source right, it means there is a lot less to go wrong”.

Love meat? Have a look at our other dining experiences for meat lovers.