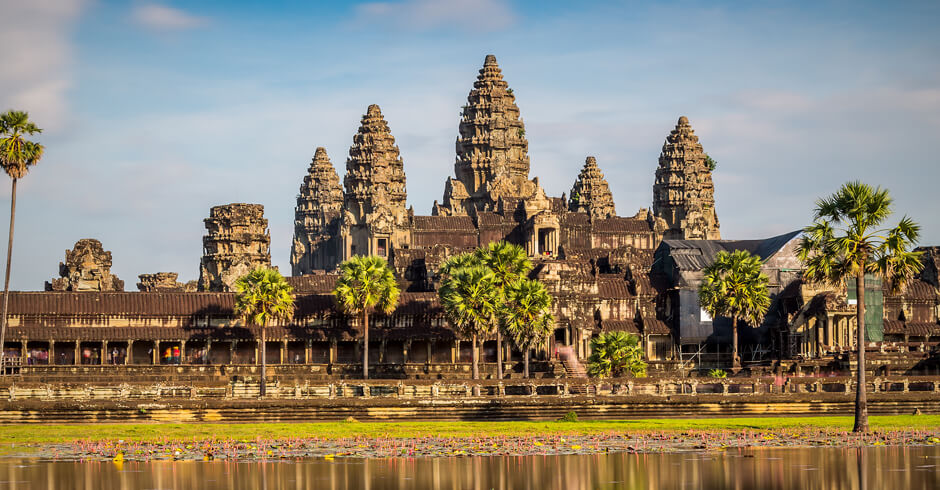 After years of oppression in the twentieth century, Cambodia is a country rediscovering itself. The successor state to the mighty Khmer empire, which, in its pomp, stretched across much of what is now Cambodia, Laos and Thailand, the marks of both the horror of last century and the grandiosity of what was before are clearest to see in the emerging luxury destinations of Siem Reap and Phnom Penh. In this luxury travel guide to Cambodia, we take a look at the best of both cities.

There’s little else around the world that bears comparison to Siem Reap and the surrounding temples of Angkor. From the laid-back town, with its bustling market centre and friendly residents, to the magical temple ruins that stretch through miles of seemingly untouched nature, it’s a destination that leaves a long-lasting impression on visitors. Take advantage of a luxury Siem Reap holiday with our pointers below.

Since the final scars of the Khmer Rouge government, which devastated the country, have begun to heal, Siem Reap has seen an increase in accommodation at both ends of the market. Backpacker hostels are offset by luxury hotels, though even spots at the highest end rarely charge beyond £90 / 140 USD per night.

Recognised as one of the top 100 hotels in the world, this Park Hyatt outpost took on the site of the longtime Hotel de la Paix in 2013. The former was just about the best hotel in the area, and the renovation only improved on that…
park.hyatt.com

The spacious Khmer style rooms here look out onto the resort’s tropical garden and pool. The hotel spa has received a number of plaudits.
boreiangkor.com

This place is the former guesthouse of King Norodom Sihanouk, so it’s safe to say you’re in good company. It was reconstructed to its former glory using old photos and local historians, today comprising of a number of luxurious contemporary suites with private plunge pools. Two meals and a driver come as part of the service.
amanresorts.com

Also see  2 Perfect Days: What to do in Istanbul 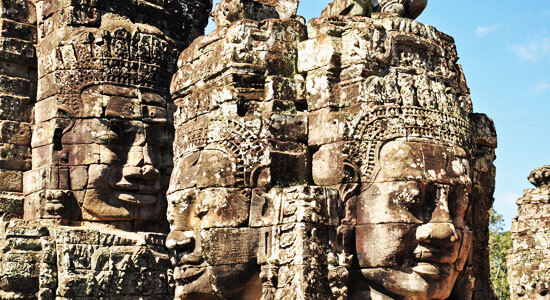 The imposing stone faces at the Bayon temple

Cuisine Wat Danmak might have the best Khmer gastronomy in town. Feast on some of the Cambodian specialities with a twist – their takes on the national dish ‘amok’ is well worth a try.
cuisinewatdamnak.com

Set inside the Raffles Grand Hotel d’Angkor, another worthy choice of hotel, this restaurant offers the full range of Khmer entertainment. The pan-Asian buffet was given the royal cookbook by the former king, while meals can be enjoyed alongside classical Khmer dance.
raffles.com 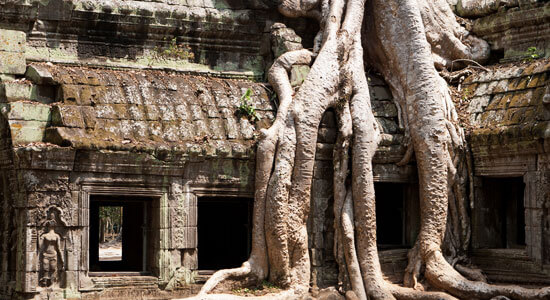 What to See and Do

Of course the highlights around Siem Reap are the stunning temples that make up the Angkor area. Here are our pick of the bunch:

Undoubtedly the most famous of them all, Angkor Wat is matched by very few other sights on earth. The national emblem of Cambodia, it is a source of great national pride. And little wonder. Crowds flock to see the sun rise over the great soaring towers, while the intricate carvings are a sight to behold.

The walled city of Angkor Thom might be most famous for its giant, imposing stone faces. It was previously the capital city of the Khmer empire, covering a distance of over 9km². The highlight here is the temple of Bayon, where the four stone faces look out from the gateways.

Ta Prohm is just about the ultimate temple destination in the Western imagination. This is owed in no small part to it being the filming location for Laura Croft’s tomb raider… Trees grow through the rubble and hang over the ancient ruins. The result is quite astonishing.

If you’re all templed out, why not try a trip to the village of Kompong Pluk? Built on stilts to avoid the Mekong’s overflow, the village is located next to a flooded forest that provides great views, while most houses are about 6 metres above ground. It’s not something you’ll see very often.

Take Me on an Angkor Photography Adventure 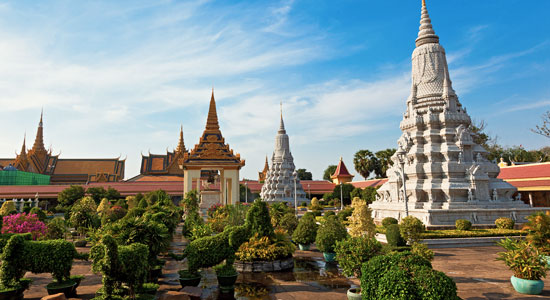 The palatial and exotic side of Phnom Penh

Cambodia’s capital combines the colour and bustle typical of south east Asian cities with a laid-back, cultural atmosphere. The worst horrors of the Khmer Rouge are documented here, be it in the S21 museum or the nearby Killing Fields. Yet, from the spires of the Royal Palace, to the lively markets and mighty Mekong river that flows through the city, it’s a diverse and exotic location that’s moving forward at a frightening pace.

You can be fairly sure of the meticulous design of a hotel that took a quarter of a century to be built. With all the facilities you could ever desire, this place offers unadulterated luxury.
hotelcambodiana.com.kh

This is one of Asia’s grand old palaces, harking back to the golden age of travel. This colonial building is just about the city’s leading address and the hotel is more than equal to its billing.
raffles.com

Worthy of its five stars, the Phnom Penh outpost of the Intercontinental provides excellent service and plush rooms. Numbering almost 350 boudoirs, however, intimacy is not one of its many plus points.
ihg.com

There’s been something of an explosion in the Phnom Penh gourmet scene in recent years, owing to both the increasing affluence of locals, plus the growing number of expats.

A delightful taste of quality Khmer cuisine is on offer at Ponlok, whose menu takes guests on an informative tour of Cambodian grub.
Mom Ponlok reviews >

Also see  The Asian Apathy to the Michelin Guide

For a taste of Cambodian cuisine the way the locals eat it, Sleuk Chark might not look much from the outside, but the adventurous cuisine is something of a delight. Who’s for frog’s legs and quail eggs in a sugar palm and pepper clay pot?
Sleuk Chark reviews >

Located in a beautiful colonial-style villa, replete with pool and gardens, the specialities here are Cambodian country fare, like lotus root and chicken salad or their famous fish amok.
tree-alliance.org 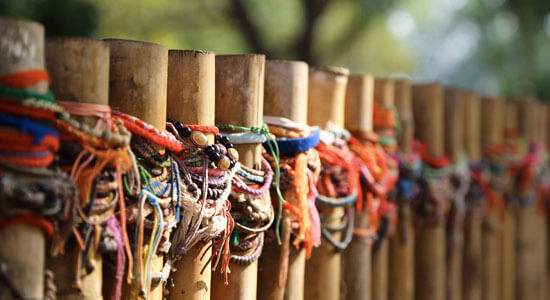 Inside the Killing Fields, where over a million people were massacred by the Khmer Rouge regime

What to see and do

Its imposing presence can be seen right across town, and the palace does not disappoint. Don’t miss the Silver Pagoda to bear witness to its thousands of silver floor tiles and many Buddhist treasures.

A harrowing visit though it may be, a trip to the nearby Killing Fields brings one of those seminal moments of realisation. Learn how the Khmer Rouge regime punished their own people in the most horrific ways possible.

In 1975, Tuol Svay Prey High School was taken over by the Khmer Rouge and turned into a prison. It quickly became the largest detention centre in the country, with over 17,000 people, between the years of 1975 and 1978, being taken from S-21 to the Killing Fields. The museum that now operates on these grounds explores the brutal regime imposed by Pol Pot.

If you’re looking for a luxury Siem Reap holiday, remember TRULY offer a photography expedition of Angkor, Phnom Kulen and Lake Tonle Sap as part of a luxury holiday.