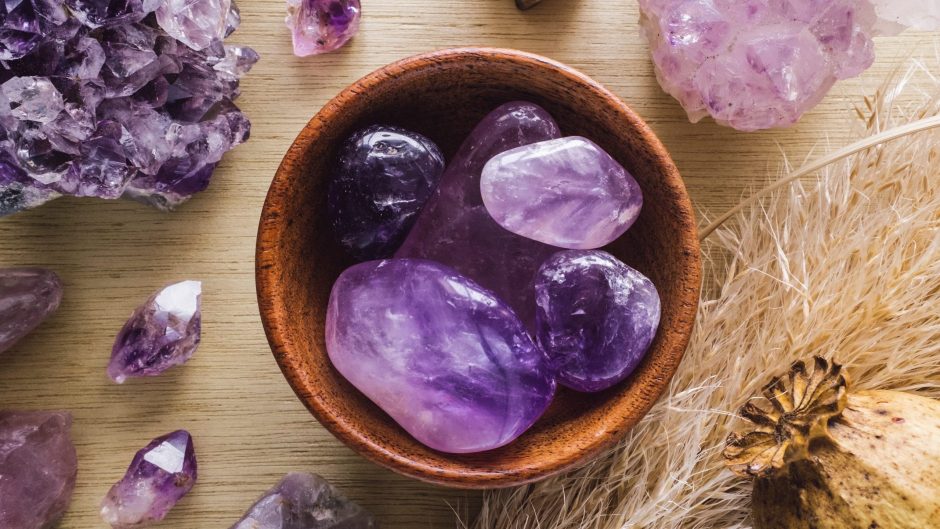 Purple gemstones have long been adored, and for good reason. There’s something about purple that intrigues people, and the colour is often associated with royalty, wealth, passion, power, luxury, ambition and magic!

While naturally occurring, purple gemstones are very rare, there are a few interesting and beautiful stones that have been found in this enigmatic hue.

Historically, purple gemstones have been renowned for having deeply spiritual powers that help the stone’s owners heal from various ailments. Purple gemstones are also thought to have an effect on mindset and are believed to inspire clarity in one’s thoughts.

Of course, as with any gemstone, the hues of purple vary from stone to stone and no two gems are alike. While gorgeous variants of purple like lavender, lilac and mauve are more commonly found, it’s the deepest colours that are most rare, and as a result, the most expensive variants of gemstones that one can find.

If you’re passionate about purple, take a look at the dazzling options you have to choose from.

No list of impressive gemstones would be complete without the mention of the most popular stone of all – the diamond.

Diamonds can be found in a wide range of colours, and of course, purple is one of them. For a purple diamond to be formed, there need to be extremely high amounts of hydrogen present during its formation. Because of this, purple diamonds rank amongst the world’s rarest coloured diamonds. A purple diamond of a single carat can typically fetch tens of thousands of dollars.

The higher the quality of the diamond, the deeper the shade of purple. While finding purple diamonds may not be a common occurrence, some of the names given to various shades of the purple stone include lilac, grape, orchid and lavender. Purple diamonds are most commonly found in Russia and Australia, although they have recently been discovered in Canada too. 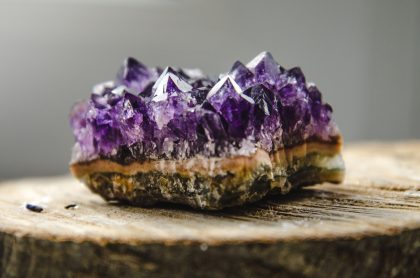 Perhaps the most easily recognisable purple gemstone is the amethyst. During ancient times, this stone was thought to be just as precious as rubies, emeralds and diamonds. Amethyst stones were held in such high esteem until large deposits were found in Brazil, which is when they became more common and accessible.

Amethyst can be found in all shades of purple, and those with the darkest hues are regarded as the highest quality. These gemstones are often used in jewellery as the colour blends well with both neutral and colourful tones. Interestingly, if amethyst is exposed to direct sunlight for too long, its colour can fade.

Amethysts are durable enough but require a great deal of effort in order to ensure they maintain their colour and lustre. However, if they are well maintained, these precious stones can last a lifetime.

The name amethyst is derived from the Greek word ametusthos, meaning “not intoxicated”. Legend has it that the purple gemstone has the power to protect its owner from drunkenness and overindulgence. Amethyst is also the stone of St. Valentine, who wore a purple amethyst ring with an engraving of Cupid on it. A symbol of faithful love, today the purple gem marks Valentine’s Day and is the birthstone for February. 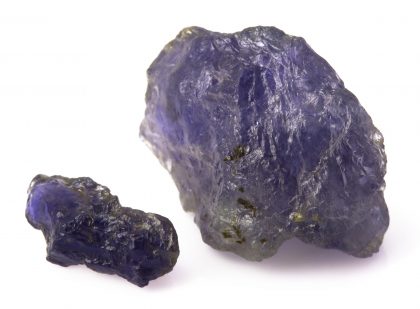 Iolites are highly sought-after purple gemstones. They are truly beautiful and rival the beauty of more expensive, highly regarded stones such as sapphires or tanzanite. Iolites are brilliant stones that occur in lovely blue-purple shades. However, due to their abundance, they are not highly valued.

Iolite is also susceptible to chips and cracks if struck with force or dropped. Regardless, it’s quite a hard stone and works well in almost every kind of jewellery. When mounted in rings, iolite needs to be set protectively in a bezel or halo mould.

Iolite is wonderfully sparkly and has an eye-catching brilliance about it. This is why it is well served in jewellery that easily catches the light, such as rings and earrings.

Iolite is known as Cordierite, a name fashioned after the French mineralogist Pierre Antoine Cordier. Another name for iolite is Dichroite, which is the Greek word for ‘two colours.’ From certain angles this stone looks as though it has more than one shade of purple in it.

Iolite comes from the Greek word ‘ios’, which means violet. Due to its shifting shades of violet-blue, iolite is associated with travel, exploration, and illumination. Iolite is also referred to as the ‘Viking’s Compass’. Legend has it that Viking explorers used iolite to help navigate their ships in the open seas. Using a thin piece of iolite as the world’s first polarizing filter, they would determine the direction of the sun to help guide them on their way. 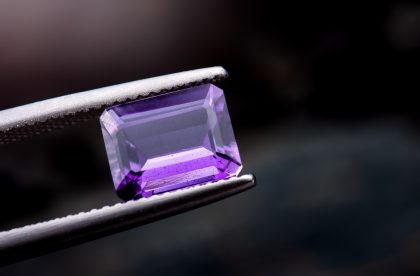 Most other sapphires on the market have been heat-treated to enhance their colour and clarity. But purple sapphires are generally not treated due to their fantastic natural colouring. Due to their remarkable natural durability, purple sapphires can be used in all kinds of jewellery, from rings that are easily bumped around to earrings that rarely move.

Purple sapphire is known as the “stone of awakening”, said to increase spiritual power and consciousness. The purple gemstone symbolises wisdom and astuteness, bringing its wearer good fortune and spiritual insight. In the Middle Ages, the gem was believed to protect those close to you from harm. Sapphire is a protection stone and also symbolises loyalty and trust. 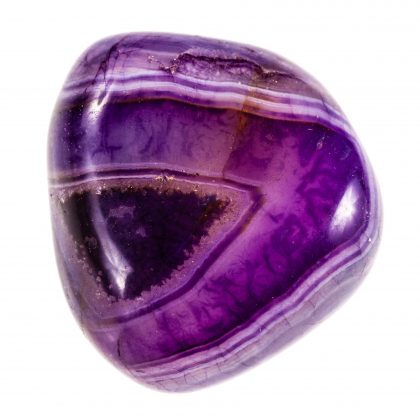 Mainly known for being a blue gemstone, jasper is found in various shades of purple too. What makes jasper stand out from other gemstones is the fact that it has a unique matrix of patterns and veins. Purple jasper is a member of the chalcedony family of gemstones and is barely faceted.

Purple jasper is a result of blue and red jasper blending together, which is why it’s such a warm shade. This precious stone is commonly used in statement pieces and fine jewellery as its colour is so impactful. It’s widely known to be used in jewellery owned by some of the world’s elite royals.

If well cared for, purple jasper can last for several decades without losing its brilliance or colour.

In terms of gemology, purple jasper represents royalty, honour, dignity, status and power, given the stone’s frequent use by royal jewellers. Purple jasper is also known as ‘the stone of bonding.’ It is thought to be able to take multiple energies at once and unite them. Crystal and spiritual healers believe that purple jasper reduces contradictions and makes way for spirituality, allowing the stone’s holder to bond better with their loved ones. 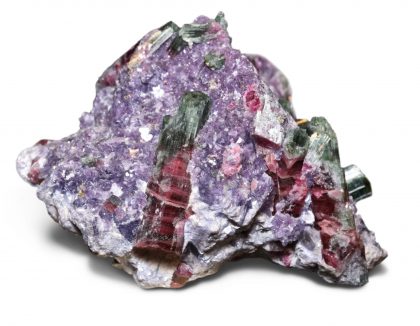 Tourmaline is a fairly popular gemstone, but, purple tourmaline is not easily found. While many people aren’t even aware of the existence of purple tourmaline, these stones are renowned by gemologists for their brilliance. They have the ability to absorb light in different ways from different angles, a phenomenon known as pleochroism.

Jewellers tend to facet purple tourmaline as a means of adding to their pleochroism. Seeing as how the stone is not a particularly hard one, purple tourmaline often undergoes heat treatment in order to strengthen it. The more heavily treated it is, the less valuable it becomes.

Purple tourmaline also goes by the name of Siberite. It’s believed to be able to promote serene energy, ground its wearer, and help you relax. Purple tourmaline can also release emotional attachments that no longer serve you and help manage headaches and migraines.

The Power of Purple Gems

While purple gemstones aren’t as common as stones of other colours, they remain popular because of how rare they are, and very few of them need to undergo any treatments to enhance their natural hues.

The depth and layering of their colours and facets make for beautiful trinkets that stand out in a way that most other stones don’t. Purple also goes very well with all colours of metal, so these gems can be used in almost every kind of jewellery setting. While white metals like silver, white gold and platinum give purple stones a more contemporary look, rose and yellow gold settings make the jewel look more vintage. Either way, they are sure to dazzle!