Blog » Hobbies » Gardening » Flowers » Flowers by Color » 24 Types of Purple Flowers: How Many Do You Know? 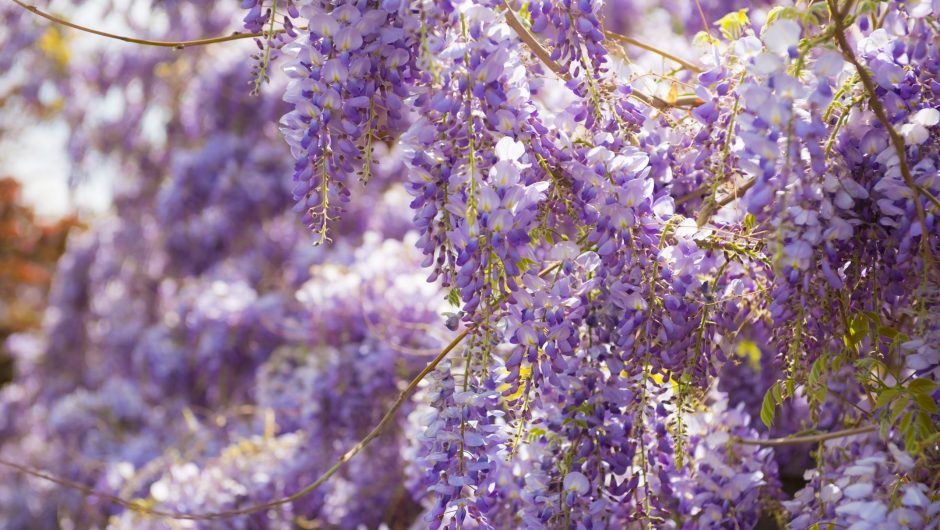 Purple has long been a colour associated with wisdom, wealth and royalty. As a result, purple flowers are usually presented to dignified people or used as decor at very upscale events.

Several centuries ago, the rarity of purple flowers meant that purple dyes for clothing were exceptionally prized and expensive, so only royal families could afford it! In recent years, purple blooms have become more popular as they’re symbolic of success, a sense of achievement and highest honours.

While purple flowers were previously thought to be rather rare, modern advancements and discoveries have led to the cultivation of different kinds of purple blossoms.

Let’s take a closer look at some of them… 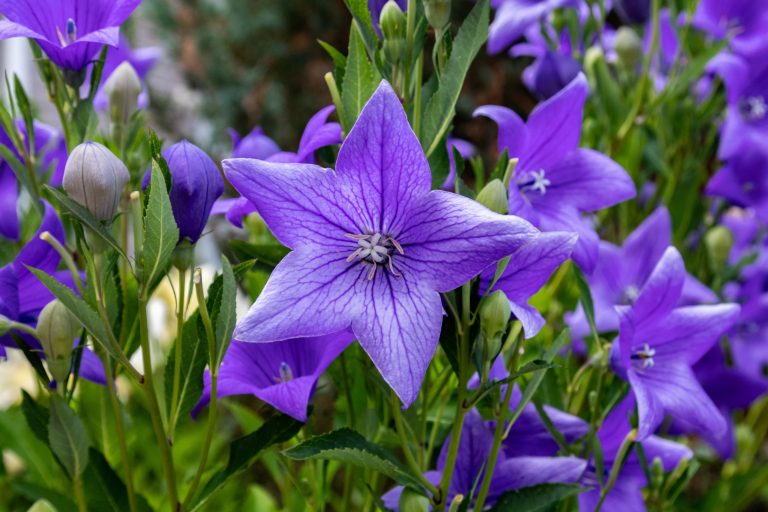 Purple balloon flowers get their name from their unopened buds, which swell up prior to opening and look like little hot air balloons. They are popular with children who like to play in the garden, as they make a light popping sound when squeezed or jumped on.

Fully bloomed balloon flowers closely resemble bellflowers. Most of the flowers are purple or blue, but they are available in white and pink varieties.

Sweet peas are very fragrant flowers, and their history goes back at least 300 years. Native to Sicily, these purple ornamental peas have weak stems, but modern hybrids have allowed for stronger stalks and bigger flowers.

These flowers work well both in gardens and bouquets. They’re considered to be suitable for borders, woodland gardens and arches. Learn how to grow these purple flowers yourself in our guide on growing sweet peas.

When wild indigo plants blossom, the purple flowers look quite elegant. These plants spend their first few years developing below the ground. With each season, the foliage, branches and blossoms become increasingly showier.

Potted seedlings are generally shorter and stubbier with floppier stems for the first few years.

Calla lilies are not considered to be true lilies, but they are an extraordinary flower. These plants are available in a multitude of colours but purple is perhaps the most popular of all.

This plant grows from rhizomes and is ideal for use in flower beds and borders. They also do very well in containers but must be in full sun for them to thrive. 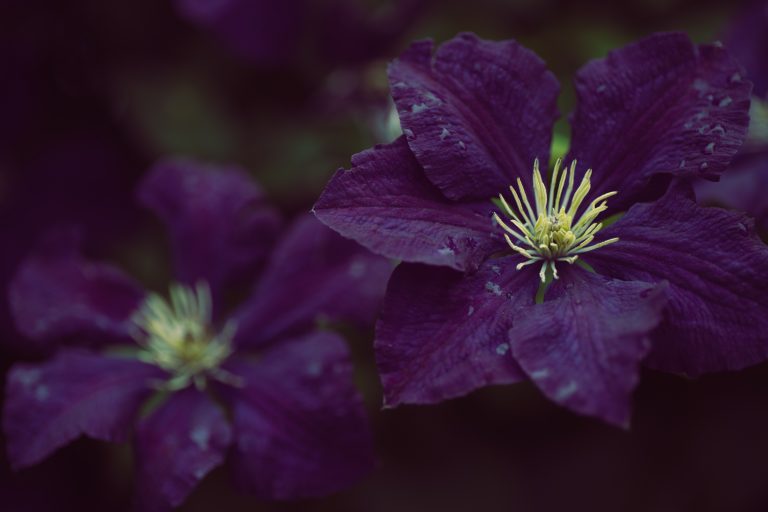 Clematis plants are easy to care for vines affectionately known as “the Queen of Climbers”. When they bloom, clematis plants are abundant in their purple flowers, which can vary in shape and size. They also have very attractive seed heads, making them a great outdoor plant for any time of the year.

New clematis plants can take a few years to put on their full show, but the wait is well worth it. They can grow up to cover posts, fences and pergolas, scramble across the ground or even drape gracefully from a container.

Butterfly bushes are typically grown for their long panicles of colourful flowers, as well as their ability to attract butterflies and other beneficial insects. This insect-attracting ability is where the plant gets its name from.

These purple flowers bloom during the Spring and Summer months, but the foliage is evergreen, making it a beautiful shrub all year round.

Butterfly bush are very hardy and can tolerate a variety of different conditions.

Purple morning glories bloom from the early Summer months, right up until the first frost of fall. They have long, slender stems and boast heart-shaped leaves.

The plant’s flowers are trumpet-shaped and fragrant. They attract plenty of butterflies and hummingbirds to whatever garden they are planted in. Those born in September are lucky to have morning glories as their birth month flower.

Native to the mountainous areas of Europe and Asia, monkshood is a tall herbaceous perennial flower. This plant blooms in the later months of Summer and does very well in the shade. The flower is so named because of its resemblance to the cowl on a monk’s habit.

Monkshood is a considerably slow-growing flower and features smooth leaves with deep lobes. 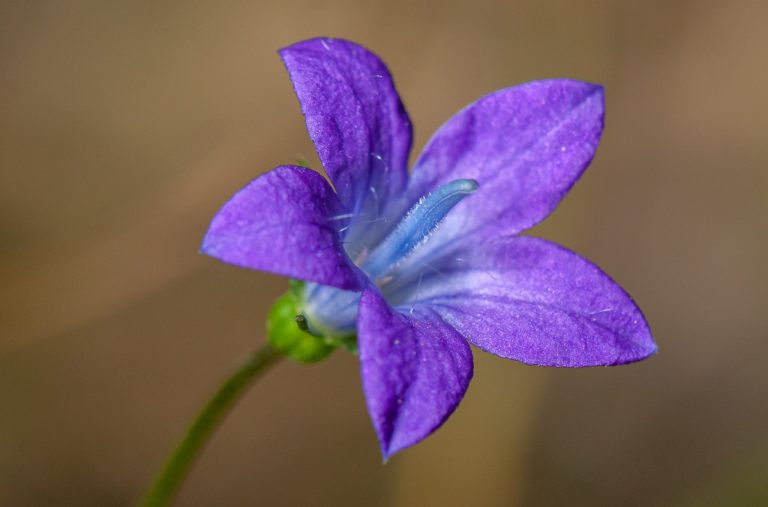 Bellflowers can instantly add cheer to any environment. They are bright purple and feature happy nodding heads. These delightful perennial flowers are native to regions with cool nights and moderate temperatures.

Bee Orchids are aptly named because of their appearance. The flowers are small and fuzzy and resemble bees. One of nature’s clever little tricks, the flowers look like bees and as a result, attract real bees!

When bees visit the plant in the hopes of mating with what they think is another bee, they help pollinate the flowers.

Bell heather flowers live for a rather long time. They are bushy shrubs with small, needle-like leaves arranged in threes around the stems. These purple flowers are bell-shaped, as their name suggests. They measure under 30 centimetres in height and produce large amounts of seed in mature plants.

Like many other plants on this list, the Scabiosa is also known by a different name: Bachelor’s Buttons. When in bloom, the plant sports big purple flowers and soft leaves. The flowers look too tender to be a wild flower, but are actually quite hardy. Scabiosa plants grow happily in fynbos alongside the sheltered slopes of the Cape Peninsula.

40 Types of Red Flowers with Names and Pictures

Scabiosa flowers can be expected anywhere between Spring time and the early months of Summer. 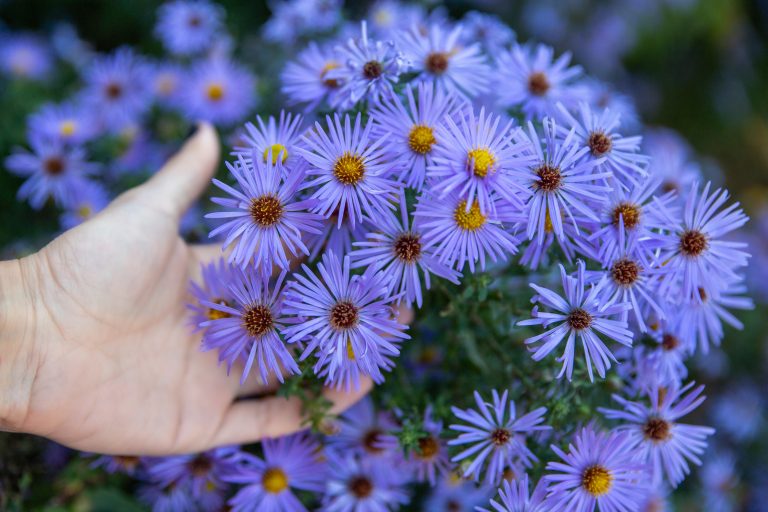 With bright purple petals and an equally bright yellow centre, aster flowers are known to add colour to any landscape and require very little care. They bloom in the later Summer months and are well-known for their perfect star shapes. As well as morning glories, asters are the September birth flower.

The wild hyacinth is also known as the Atlantic Camas. This plant is the only eastern species of its genus, which means that it’s a member of the lily family, and is characterized by squat bulbs that look similar to tulips in shape.

When wild hyacinth plants blossom, its flowers start from the bottom of the bloom and then progress towards the top of the spike-like stem.

The light purple wisteria plants have an almost undeniable fragrance. While this vine flowers very easily in the later months of Spring, extra care should be paid to the plant to ensure that it doesn’t overtake any of the other parts of the garden.

These plants don’t do well in the colder climates, and as a result, need to receive plenty of sunlight throughout the day.

Heliotrope plants were somewhat difficult to find until very recently when they started making something of a comeback. These dense clusters of delicate purple flowers offer up a delicious aroma, which they have become famed for all around the world. 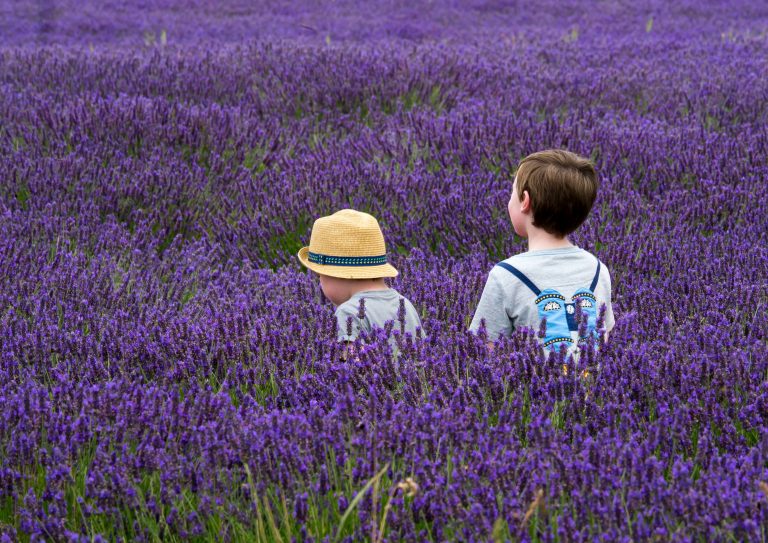 Lavender plants have long been sought after, not just for their beauty, but for their healing properties too. Their fragrance is believed to be able to help soothe headaches, as well as have a calming effect on the mind.

Native to the Mediterranean, lavender grows in bushes, and the tiny flowers that grow on the stalk come in a variety of colours including violet blush, rose, light pink, white and yellow. However, the most popular and easily recognisable hue for lavender bushes is purple.

Also known as sage, salvias have become mainstays of the midsummer garden border. They go a long way in helping gardens move from the blooming Summers into the Autumn months.

Salvia plants are very aromatic and work well as cut flowers. They are tolerant of droughts and well-loved by bees and butterflies, making for fairly easy pollination.

Native to Turkey, the dwarf iris is simply a smaller version of the iris. They only grow to between 14 and 16 centimetres tall, which makes them ideal for borders and edging. These little wildflowers spread through underground rhizomatous stems and bloom at their best during the Springtime.

Anemone is a common name given to a number of different species of this plant. Often considered to be wildflowers, the purple poppy-like flowers sway in the slightest breeze. In fact, the Greek word from which anemone is derived, anemos means “wind”.

These flowers bloom best in Spring and Autumn and are popular in wedding bouquets. Apart from purple, other colours of the plant include white, pink, yellow and even red. 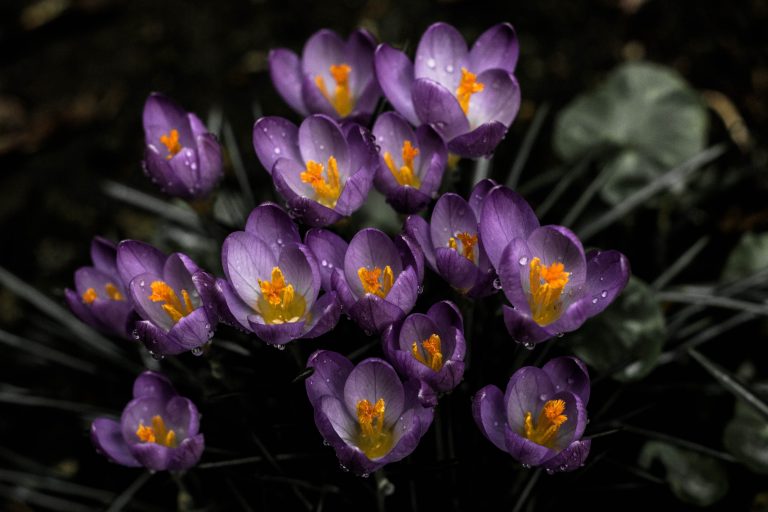 The Crocus is a genus of roughly 90 closely related species of bulbous perennial herbaceous plants belonging to the Iris family. This plant grows from corms and flowers in the Springtime.

Purple crocus flowers are quite small and grow between just four and six inches tall. They are native to North Africa, the Middle East and the Eastern Mediterranean.

Annual honesty plants are known more for their seeds than their purple flowers. They have very distinctive flat, translucent papery pods that hold dark seeds. These plants are often used in dry flower arranging.

When these flowers do blossom in the early Spring and Summer months, they are quite beautiful in their own right and attract plenty of insects to assist in pollination.

The Pasque Flower is a low-growing herbaceous perennial that can grow up to 12 inches tall. They are bee-friendly, which ensures these purple blossoms are pollinated.

These flowers are native to Europe Asia and the North American prairies and their name derives from the Hebrew word “pasakh” meaning Passover.

Lily of the Nile 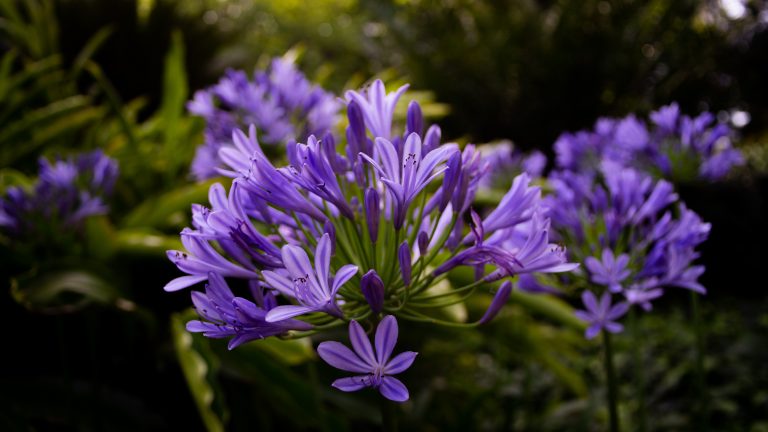 Also known as the agapanthus, the Lily of the Nile is native to South Africa. These blossoms display large masses of small flowers, usually in purple or white, on top of tall, slender stalks. Each plant has the potential to reach up to a height of approximately one metre.

As you can see, there are plenty of purple flowers that grow across the globe. Whether you’re looking for flowers for a bouquet, a vase or a wedding, there are sure to be blooms in this hue to suit you.