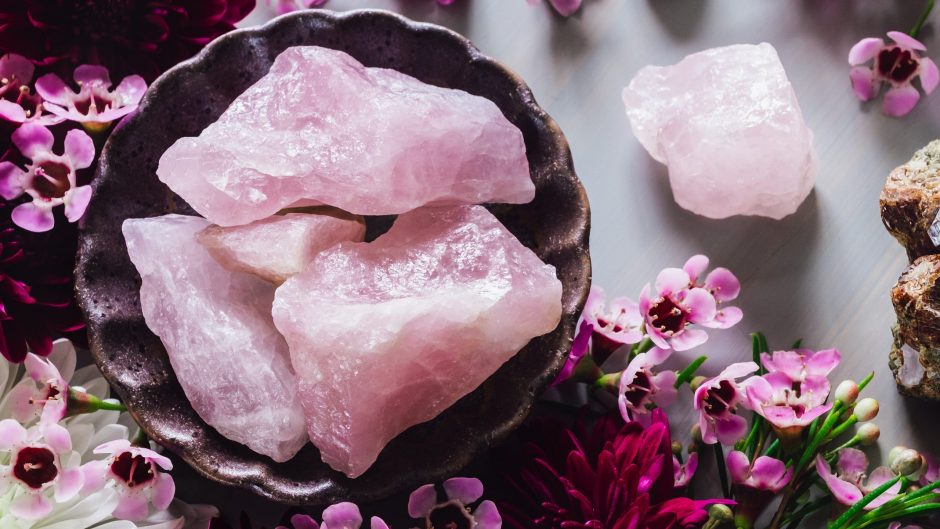 Pink gems have gained popularity in recent times. They’re pretty to look at, and they make a statement too.

Remember the movie The Pink Panther and the circus that ensued in search of the rare pink diamond? In some cases, hunting down certain pink stones will have you searching high and low too, while others are more readily available.

With so many other colour options and varieties available, we can’t help but wonder what makes this specific hue so sought after? And more specifically, what the meaning behind each pink gemstone is?

Join us as we delve deep into the world of pink gems, pink crystals and everything to do with these pretty stones.

What Do Pink Gemstones Represent?

While these stones may mean different things, pink gems often relate to love, affection, and the heart chakra. This is due to the fact that we often experience certain psychological reactions when exposed to certain colours.

In this case, and as you’ll see below, pink is most often associated with love. If you think about how we draw hearts, it’s easy to see why! 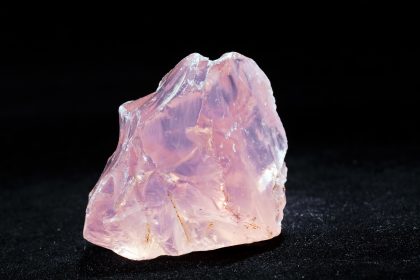 A light pink gemstone with a delicate colour, Rose Quartz that can either be translucent, or completely transparent. The more affordable pink crystals have a milky appearance, while the more expensive ones have a clear star effect.

What is the meaning of Rose Quartz?

Rose quartz is said to be the stone of universal love, carrying an energy of compassion and healing. The meaning behind rose quartz is calmness, love and romance.

Sapphire is one of the most popular gemstones, and the pink variety is in high demand. It’s rarer than the blue sapphire and is the second hardest stone on earth – with the diamond being first. Pink sapphire is available in shades that range from cool violet to warm peach.

What is the meaning of Pink Sapphire?

Good fortune and passionate love are what you can hope to get from this pink gemstone. Pink sapphires are associated with trust, loyalty and compassion, which is why this coloured sapphire is a popular choice for engagement and wedding rings. 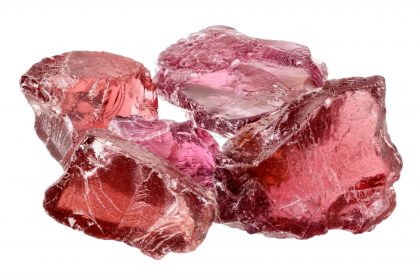 A gem that’s a bright reddish-pink colour, almost like a raspberry, this garnet is also available in shades that range from hot pink to rose pink. The stone itself is a combination of Pyrope and Almandine Garnet.

What is the meaning of Rhodolite Garnet?

A type of topaz that emerged in 1998, these pink stones are relatively new. To create these pink gems, a natural topaz is coated with a coloured film layer at the bottom of the stone. This process is called thin film deposition and can be used to create darker or light pink gemstones.

Your Guide to Purple Gemstones - List of Names, Meanings & Pictures

What is the meaning of Pink Topaz?

Pink topaz is believed to be connected to the heart chakra, which is why it inspires and promote loves. This particular colour of topaz is also seen as the symbol of eternity. 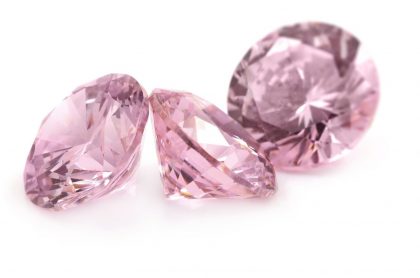 What is the meaning of Morganite?

Like many other pink gemstones on this list, morganite carries the meaning of romance, love and harmony. Because of its soft pink hue, it’s also associated with innocence and purity.

One of the rarer opal varieties, pink opals originate in Peru. The pinks with a deeper colouring are a lot more expensive than the light pink gemstones. These hues are more stable and durable than precious opal and are in high demand.

What is the meaning of Pink Opal?

Pink opal is sometimes referred to as “The Stone of Resolution” because it’s said to be able to heal emotional wounds and release worry and anxiety. It’s also a stone of love, kindness and gentleness. 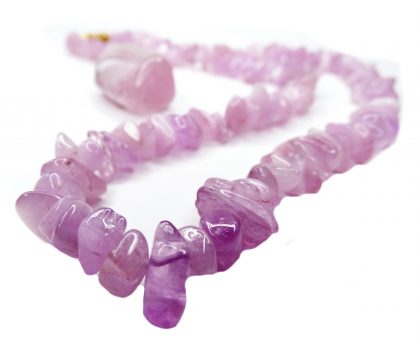 Named after George Frederick Kunz, the VP for Tiffany & Co, these pink stones are the perfect addition to any statement piece. They’re available in shades of pink and violet, although it’s best to keep them out of the sunlight to prevent the colour from fading.

What is the meaning of Pink Kunzite?

Pink kunzite carries the meanings of emotion and healing. Some say this pink stone helps you find peace in your heart and restore happiness after a heartbreak.

This stone is a mix up of Pyrope and Spessartite Garnet. Back in the 1960s when it was discovered, it was deemed the outcast of garnets as it didn’t fall into any of the categories available during those years. This has since changed, and the Malaya garnet has become a rarity due to its vibrant peach and pink shades.

What is the meaning of Pink Malaya Garnet?

In general, Malaya garnets symbolize regeneration and a fresh start. Pink Malaya garnets are associated with warding off evil spirits and negative energies. 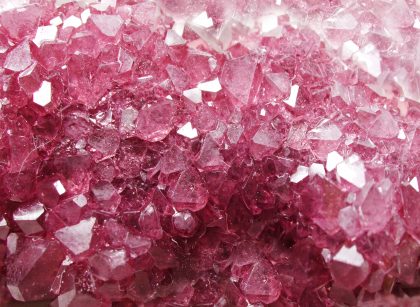 Tourmaline comes in a wide range of colours and is incredibly versatile and durable. The shades range from soft light pink gemstones to dark black and even watermelon tourmaline.

What is the meaning of Pink Tourmaline?

Pink tourmaline carries the meanings of compassion, self-healing, and love. Some people claim it is the perfect stone to carry if you suffer from anxiety.

This pink gem is formed by calcium carbonate that has been coloured as a result of the presence of carotenoid pigments in the water. The coral comes in a wide range of colours that range from white all the way to red – and everything in between. They’re often carved or turned into beads.

What is the meaning of Pink Coral Gems? 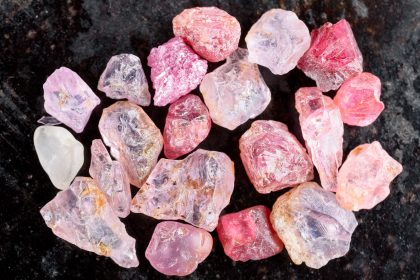 This pink stone is often mistaken for a sapphire or ruby. It’s made of magnesium aluminium oxide and is available in a wide range of colours. The bigger the stone and the more vibrant the colour, the more it’s worth.

What is the meaning of Pink Spinel?

Pink Spinel is a stone of revitalization. Its properties include renewing energy and helping those suffering from chronic conditions.

Rare and nearly impossible to source due to their deposits being exhausted in Madagascar, Pezzottaite is a true gem! It is sometimes called “Rapberry Beryl” because of its striking similarity to Beryl. Potential new deposits have been found in Afghanistan, but further testing is needed to prove that it is a Pezzottaite.

What is the meaning of Pezzottaite?

Pezzottaite carries the meaning of confidence and wisdom. 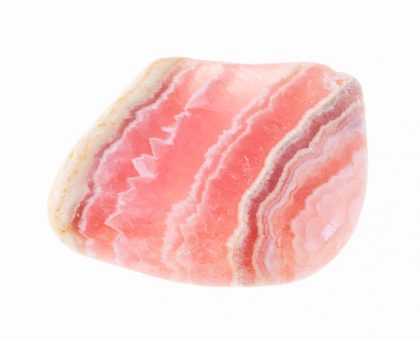 The name Rhodochrosite comes from the Greek “rhodos”, meaning rose, and “khros” meaning “color. This stone is famous for its distinct pink and deep red stripes. It comes in endless pink-hued combinations and is priced accordingly.

What is the meaning of Pink Rhodochrosite?

This striking pink gemstone is associated with love, motherhood, and romance. Known as “The Stone of the Compassionate Heart”, it’s believed to encourage a positive and cheerful outlook

Zircon is a favourite diamond substitute because of its affordability, durability, and brilliance. The pink stone often features violet and orange hues.

What is the meaning of Pink Zircon?

Pink Zircon is believed to promote confidence and help you to achieve your dreams and goals. It carries the meaning of prosperity and success. 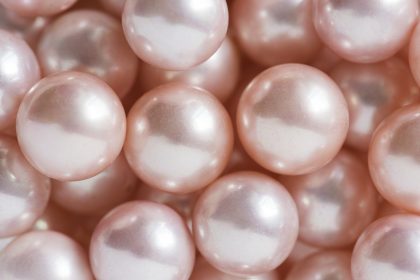 Interesting fact – pearls are in fact gems! Colourful pearls are rare, which means that finding a pink pearl may take a lot of time and effort. But their beauty is undeniable!

What is the meaning of Pink Pearls?

This is one of the rarer varieties of quartz. These pink crystals have parallel aligned rutile that results in a star-like effect in the stone. This is most visible under strong lighting, and when the light source moves, the star effect will change too.

What is the meaning of Pink Star Rose Quartz?

Pink Star Rose Quartz is said to bring luck in your love life. Legend has it that this valued gemstone that has the energy of goddess and angels. 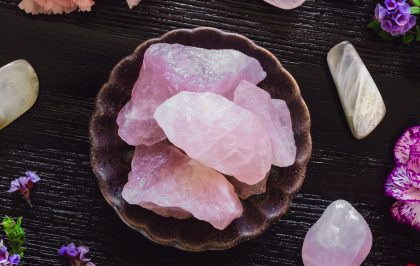 When it comes to optical properties, this pink stone is the most affordable. It’s often cut into flower-like shapes and appeals to most people. It’s not only a lovely addition to any piece of jewellery, but it’s also been widely associated with folklore.

What is the meaning of Pink Moonstone?

Pink Moonstone is a stone for new beginnings. It’s associated with love, passion, and femininity.

This stunning stone was named after James Smithson, the first person to discover that Calamine was made up of two minerals, one of which was Smithsonite.

What is the meaning of Pink Smithsonite?

Compassion and forgiveness are the values associated with Pink Smithsonite. 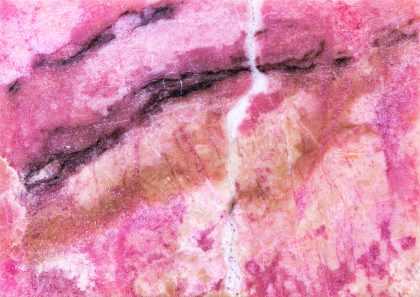 Pink rhodonite is a gem that is similar to the rhodochrosite, except that it features hues of black instead of white.

What is the meaning of Pink Rhodonite?

This pink gemstone is said to help with maintaining balance, grounding your energy, and assist you in reaching your potential.

The World’s Most Famous Pink Gemstones

Pink crystals and gemstones have a long and illustrious history and these are just some that have left their mark on the annals of time:

There’s no shortage of options when choosing a pink gem – depending on what you’re looking for of course. There are options to suit any style and budget, all it takes is a bit of research to discover your perfect match.

If you’re looking for an investment piece, choosing a pink stone is always a good option. The more expensive pieces are rare and continue to grow in value with every passing day. If you’re simply looking for a unique, statement piece, there are more cost-effective options available to choose from.

Simply put, pink gems are incredibly versatile and durable, giving you the opportunity to turn heads.

Set in beautiful jewellery or on their own, pink gems and crystals make wonderful gifts, for others and yourself!

Find out more about different coloured gemstones below: