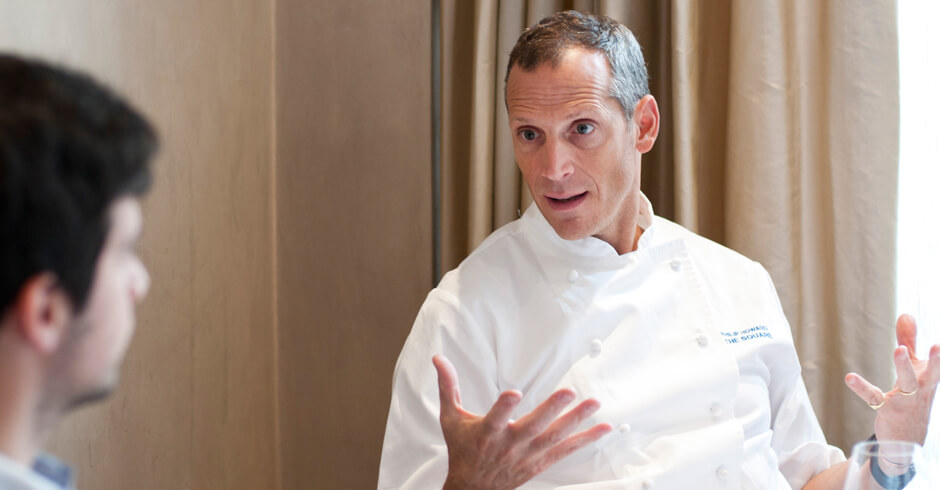 Phil Howard didn’t touch a kitchen appliance until he was in his twenties. Now a Michelin two star chef, co-proprietor of restaurant almost a quarter of a century years young and a self-proclaimed dinosaur, he has become one of the biggest influencers in the world of cooking.

It’s a Thursday morning and, after an inviting welcome from the staff, we’re sitting down with Phil Howard in his restaurant in the centre of Mayfair. “My day is spiralling out of control,” he says. With that, all previous notions of having a placid conversation with the man have gone emphatically out the window.

We already know Phil is efficient and regimented about his food as much as he is about his schedule. It’s little surprise then that he hasn’t had much of a chance to look at the updated Michelin guide released this morning. “I had but a half a second glance,” he says, “But I’m not worried. After seventeen years on two stars, anything we’ve achieved over the years has been off the back of doing what we do.

“Of course when you’ve had two stars you start looking at three, but I’m aware that ultimately it’s about quality in consistency and to go up that last rung of the ladder requires a huge commitment. It’s not that we’re not up to doing that – we’re open seven days a week and I love spending time in the kitchen – but I want to keep a life outside of it. I’m much more proud of having achieved what we have achieved and managing a balanced life as opposed to those people who will look back and think all they’ve ever done is cooked.” 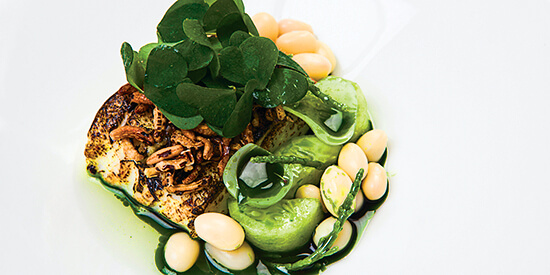 Phil’s reluctance to take on another star is something of a contrast to Gordon Ramsay’s tearful reaction when he lost his. Cynics might call it a lack of ambition, but it’s not to say Phil undervalues the esteem a three star chef receives. “The Michelin guide has been the backbone of my culinary ambition, and many others’ too. I’m one of those chefs who thought that’s what I wanted and that’s where I’ve got to in many ways. But the real question is what is the correct thing to be doing with The Square going forward.

“I get fulfilment out of getting everything I can out of life rather than just trying to get three stars.”

“You want to feel that your food is wanted and enjoyed and the classic standards that we all have come to expect of Michelin two and three star restaurants is actually not necessarily a wonderful thing anymore. It’s wonderful in that it puts you into a pedigree that is respected worldwide through consumers, but it’s also important to make sure your restaurant also appeals in other ways that make people want to go there.”

It might be a surprise to some that, despite the wealth of success The Square has enjoyed over the past twenty three years, it hasn’t achieved that through a revolution of innovative food or an attempt to change our ideas of what appeals to our palates. “I’m very simple – the world of cooking has changed a lot, and there are chefs out there who philosophise and theorise ­­– but my cooking, all the menus, all my experiences with food, and all my thoughts about food are very simple and stomach-led.

“I love eating, I love food, and everything I do is intuitive. Chefs come in all sorts of varieties, and we all have our strengths and weaknesses, but I just acknowledge things that are in tune with classical flavours and pairings. I don’t analyse or theorise about it, I just focus on cooking lots of good food.”

On top of Mr Howard’s relatively late introduction to cooking, he was never formally educated at cookery school, and is a rare example of a successful chef who builds his menus purely from his exceptional palate rather than through staunch traditions or by the book. Phil’s take on what makes great food has a lot to say against the so-called pioneers of culinary arts. So much so that the very idea of molecular gastronomy, as he says, ‘wrangles’ him. 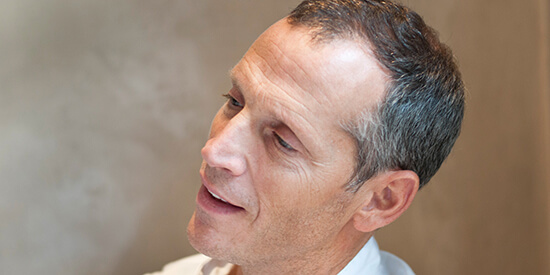 “But only because I’m old school. You have to have mavericks out there, otherwise dinosaurs like me don’t progress at all. What I find frustrating is the acclaim that gets heaped on restaurants serving new food that isn’t delicious. We all know what delicious food should be like – it can be a chicken tikka or a mars bar – I’m not talking about fancy food here, I’m talking about food that gives us pleasure. Once you’re in that territory, it’s impressive and you’re technically accomplished, brilliant in many ways, but the food’s not delicious. There are chefs out there, the Robuchons of this world, who produce food that’s spectacularly brilliant and delicious at the same time. That’s what great food is for me.”

“When I started cooking, if you were an ambitious chef you always wanted to cook fancy Michelin-grade food, but for a variety of reasons chefs have realised you can still be very ambitious and cook great simple things. And they can be simple modest things.”

Despite the apparent self-imposed limitations, being restrained to one school of thought in the kitchen isn’t detrimental to the variety of food that gets put on the menu. Not at The Square, anyway. “Cooking in a classical way is a huge canvas on which to be free, but in the world of French cooking it appears that the modern superchef thinks that old school is old fashioned and boring and we need to reinvent the wheel.

“In France they would’ve taken ceps, for example, and eaten them with all sorts of different things before coming to the conclusion ceps are most delicious served with thyme and garlic. Or parsley and garlic. You can’t deny that, so why serve them with orange zest and vanilla? All this trial and error that was done by generations of people once upon a time modern movements are now rejecting. And I don’t get that.”

So if Phil rejects the ‘superchefs’ that radicalise what’s new, who, in his eyes, is doing the right thing? “I love seeing what other people are doing,” he says. The last great meal I had would have to be at the Clove Club, which I rate really highly. I think he (Isaac McHale) is going to be one of the greatest cooks of this generation. He’s an eater, he’s skilled, and his food is utterly delicious but interesting too. It mostly stems from classical things and pairings, but he cooks in a contemporary way and it’s as good as it gets.” 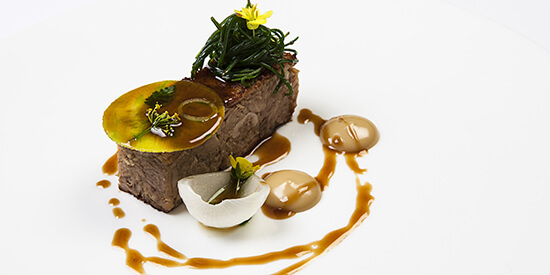 “When flavours come together where the whole of the dish is better than the individual parts, that’s when food is special.”

Having a restaurant in the epicentre of Mayfair for so long is a blessing, but the difficulty of the competition is not any different to how it was two decades ago. In fact, despite The Square’s security in its position, competition, as Phil says, is rampant. “We’ve been here a long time but now London has got a staggering amount of good restaurants, and Mayfair has its fair share of them, but these days you can hang out in Shoreditch or go to Hakkasan or Umu or wherever – there’s a whole range of those restaurants out there. At the moment we’re just making sure that as a package The Square remains contemporary and attractive.”

Yet with the likes of Hakkasan, the restaurant some might call the embodiment of contemporary dining, situated virtually feet away, there doesn’t seem to be an overwhelming sense of pressure on The Square. Reviews, which like any other artful business can make you or break you, Phil treats with just as much ambivalence. “Ultimately having a full dining room is what gives me pleasure, as well as when I’m cooking well. I’ve become a little disillusioned with the world of judgement because I don’t relate to the consensus out there as well as I used to.

“Generally I’ve been around long enough to have a pretty good perspective on how we’re doing just by being here. And that’s part of what makes me happy. You wouldn’t be busy in this world unless you were giving a lot of pleasure. So that’s what we aim to do.”