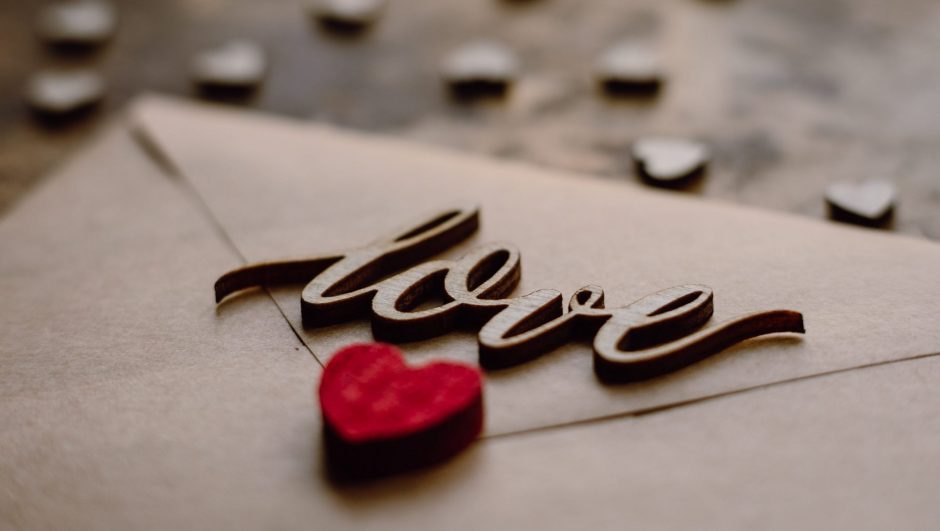 What is the traditional first anniversary gift? 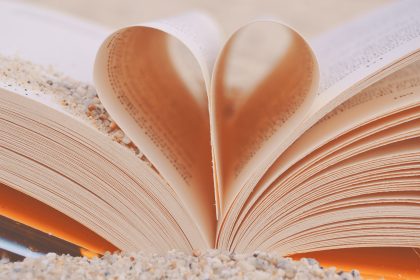 In case you hadn’t already gathered, paper is the traditional one year anniversary gift. Paper is representative of how you have both just started your lives together – it’s a clean sheet to create new memories and paint your lives how you want. This first milestone in your marriage is a time to look back on the first chapter of your lives and start planning how you want to fill the rest of your book of love.

Did you know that there are also wedding anniversary flowers, gemstones and colours? Carnations are one year anniversary flowers. These vibrant blooms represent young, passionate love and commitment. They are a symbol of all you have to look forward to in your marriage.

In terms of jewellery and precious stones, gold marks the first wedding anniversary. This metal symbolises good fortune, wealth and prosperity for the many years of marriage still to come.

Joyful yellow is the first anniversary colour. Yellow stands for happiness, energy and optimism – something newly married couples are full of! Yellow also represents honour and loyalty, a nod to your long-term commitment to stay  true to each other.

Now that you know the traditional and modern gifts and symbols for the first year anniversary, let’s jump into some unique one year anniversary gift ideas for husband, wives and couples.

First Anniversary Gift Ideas for Him

Because paper is an inexpensive, easy-to-come-by material, it can be difficult to come up with special anniversary gifts for him. But don’t worry – these creative one year anniversary gift ideas for husbands will have him over-the-moon. 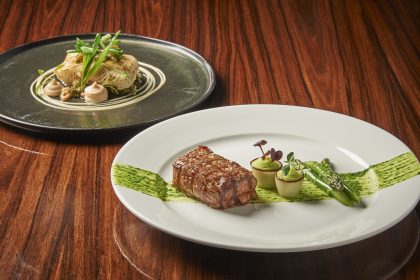 When it comes to finding the perfect paper anniversary gift, it doesn’t get much better than a gift card experience. You get to spoil him with absolutely anything that he’s interested in. And the best part? It’s just a piece of paper, but it means a whole lot more!

If he’s obsessed with food, why not spoil him with a restaurant gift voucher for a fancy restaurant. He’ll get to taste Gordan Ramsay’s famous beef wellington, or experience dining at the Shard. Hopefully, he’ll take you as his date so you can enjoy the sensational food too.

Got no idea what to get your husband? There’s no shame in gifting them with a monetary gift card. This way the pressure of getting it wrong is off you, and he can get something he really, really wants! There’s really no limit to the amount of happiness a gift card can buy.

Personalised Where We Met Map 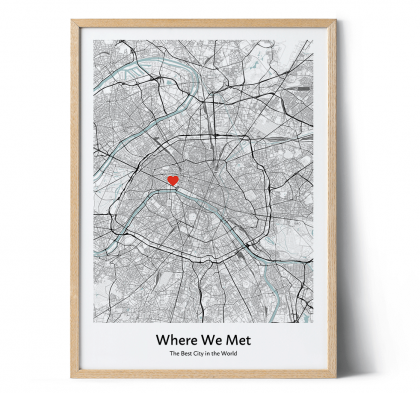 You’re a year into your marriage but it all started when you first laid eyes on each other. Commemorate that special day forever with a Where We Met Map. The custom-made paper art print marks the exact spot where the magic began with a romantic ❤️  symbol. Although it’s a personalized 1st anniversary gift for him, it’s a present that means something to you as a couple. 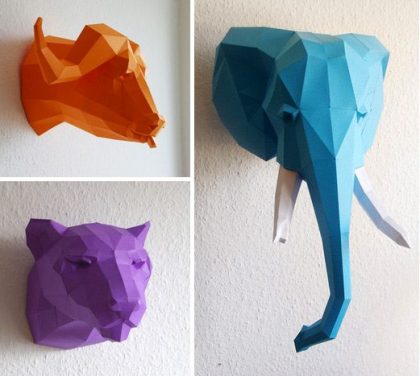 Staying with the arts and crafts theme, these animal paper sculptures from Paperwolf are uber trendy. The paper designs range from taxidermy trophies to standalone animals that come with detailed instructions on how to fold and assemble yourself. He’ll love the challenge of assembling his own paper anniversary gift, especially if it means he’ll get to hang it proudly on the walls. 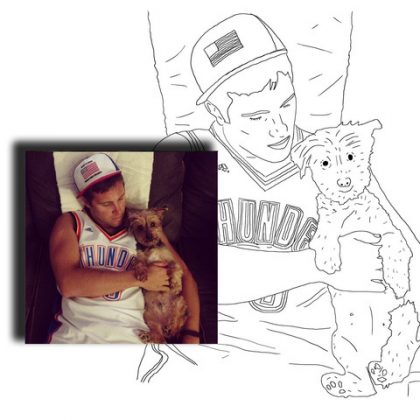 Haven’t you heard? Adult colouring-in books are all the rage. Besides the many health benefits like reducing stress and anxiety, it’s just plain fun! Get him in on the art therapy action with a custom Color Me Book. You can fill it with silly pictures of him, cute snaps of your pet, or romantic photographs of the two of you. After uploading your favourite photos, they’ll be hand traced to create a unique colouring book your hubby can keep forever. This is definitely one of the fun and meaningful first year anniversary gifts out there that you can seriously consider! 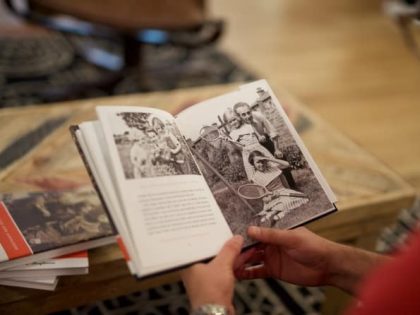 Your first year anniversary is a time to look back on the first chapter of your lives. While you’ve only been married for twelve months, you have a lifetime of shared memories. From the day you first met, to that first awkward date, and now your first wedding anniversary.

To really capture these milestones in your relationship, have your favourite memories and wedding photos transformed into a beautiful photo-illustrated memory book. Working with professional writers, your most meaningful experiences will be beautifully written in a way that captures your voice and your love. It’s one of those unique first anniversary gifts that can be handed down to your children, from one generation to the next. 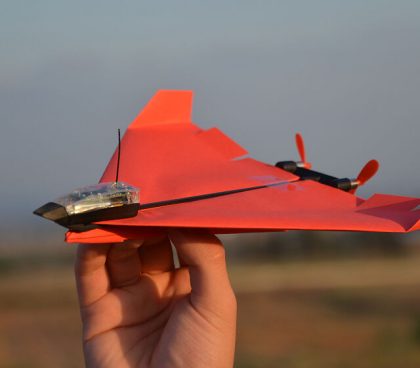 Let him relive his childhood with this fun-filled paper gift with a twist. After he’s folded his “paper” aeroplane (which is actually crash-proof carbon fibre) he’ll download the app and control the nifty plane from his smartphone. It’s love and first flight with this unique paper-themed anniversary gift idea. Bonus points if you get him one in yellow, the one year anniversary colour. 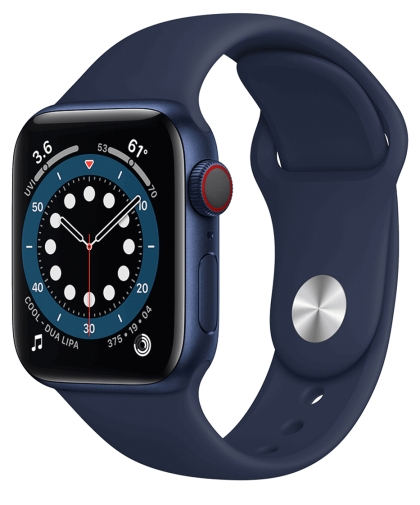 There’s a reason everyone is sporting one of these top-of-the-line sports watches. The Apple Watch Series 6 is the latest in Apple’s incredible range of health devices, and it’s the perfect gift for a husband you want to spoil. Sure, it’s not made of paper, but it is watch, and that’s the modern gift for your 1st anniversary. Not like you needed an excuse! 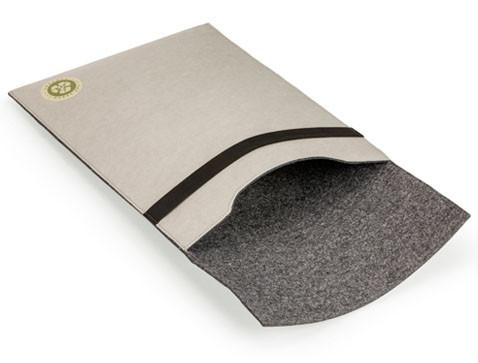 Not only does this stylish sleeve protect his laptop, but it’ll also protect the environment too. The Earth Company’s laptop sleeve is crafted from recycled Kraft paper, which means you can feel good for doing something nice for Mother Nature while spoiling your man. He’ll love the hand-sewn simple design made from eco-friendly materials.

Wedding Anniversary Flowers By Year: What Flowers Should You Give?

First Anniversary Gift Ideas for Her

Looking to spoil your Missus? These unique paper anniversary gifts show her how much you love being her husband. Be warned – these gifts set the bar pretty high for your second anniversary to come! 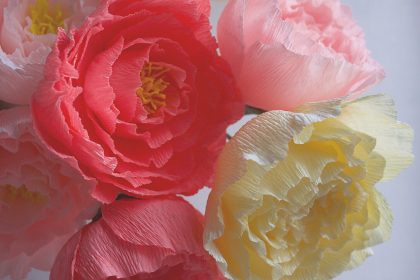 Every woman loves receiving a beautiful bouquet of flowers for her wedding anniversary, but unfortunately, fresh flowers only last so long. For something personal and perfectly paper-themed, surprise her with a private paper floristry masterclass. Held at a location of your choice, she’ll learn how to craft beautiful paper flowers. It’s a fun-filled activity the two of you can do together as a couple on your special anniversary. 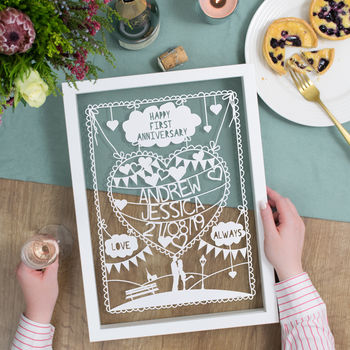 Immortalized your paper anniversary – and your love for each other – with this romantic custom-made papercut gift. Make it extra special by personalising it with your names, wedding anniversary date or saying that’s special to you. She’ll proudly hang it in your home as a conversation-starting wall hanging. 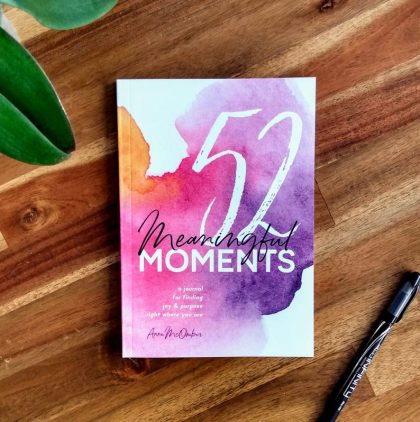 For the woman who loves to put her thoughts and ideas to paper, you can’t go wrong with a new journal. Keep her inspired and motivated with this beautiful journal filled with mindful self-care prompts. Everyday it’ll serve as a heartfelt reminder that no matter her struggles or strengths, hopes or heartbreaks, you love her for who she is. 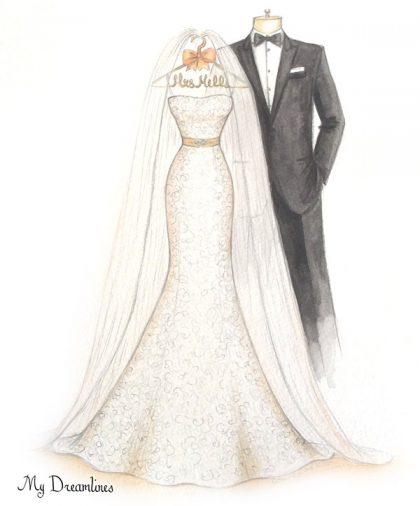 Just a year ago you shared the most special day of your lives – your wedding day. Remember how incredible the two of you looked, side of side? Remember that wedding dress she wore, the dress she’d been dreaming of since she was a little girl?

As a reminder of how breathtakingly beautiful she looked, surprise her with a customized handmade sketch of her wedding dress. Dreamlines mirrors your wedding attire in a detailed, whimsical fashion style sketch. This sentimental paper anniversary gift is perfect for hanging on your wall at home, a nostalgic token from the day that started the rest of your lives together. 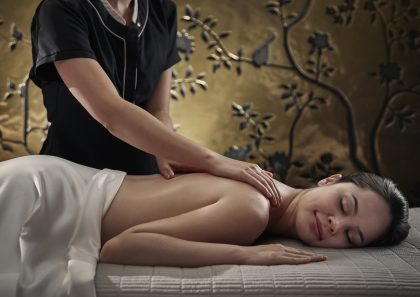 Who doesn’t love feeling pampered on their wedding anniversary (or any other day for that matter)? Indulge your leading lady with a gift voucher for a spa experience to thank her for all that she does for you. Whether it’s a deep tissue massage, a personalised facial or a holistic spa day in a private suite at the Dorchester, she’ll feel like the pampered princess she is. 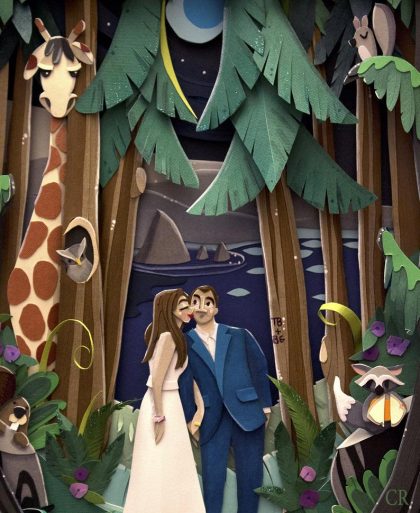 Celebrate the enduring love in your relationship with the gift of a custom wedding portrait made out of cut paper. Handmade using itsy bitsy scissors and glue, this whimsical 3D paper cut is a really unique paper gift for her she can cherish forever. 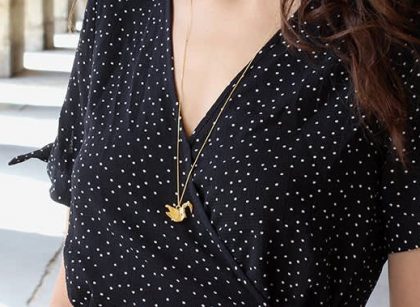 This creative 1st anniversary gift idea perfectly rolls two first anniversary themes into one – paper and gold. Inspired by the traditional Japanese art of folding paper, your wife will surely love a piece of elegant gold plated origami jewellery. Take your pick from earrings, a necklace or ring. 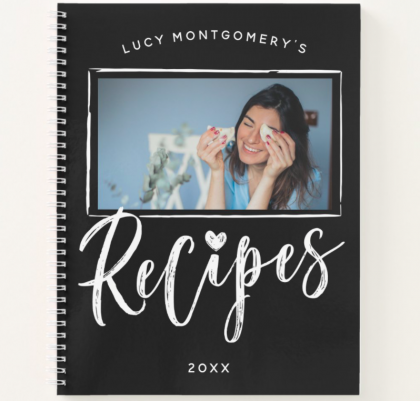 Whether she’s a blossoming baker or the world’s next best Michelin star chef, she’ll love her very own recipe book. But this isn’t just any old cookbook. Featuring your choice of design, you own personalisation, and her name on the front, it really is a special addition to her recipe book collection.

It’s only been 12 months since they received their wedding gifts – what should you gift the happy couple for their 1st anniversary gift? These paper gifts celebrate their blossoming love and congratulate them on making it through the first year of marriage. 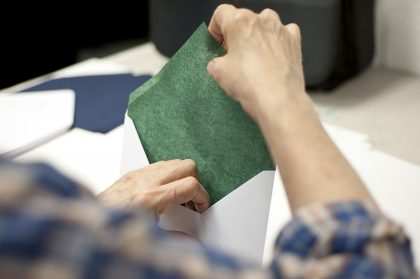 The joy of having Mr. and Mrs. followed by your shared last name is something that doesn’t get old. And it’s something they should have proudly printed on their own bespoke couple’s stationery set.

No-one does bespoke stationery like Barnard & Westwood. Founded nearly a century ago, the esteemed company was recognised with the grant of a Royal Warrant of Appointment to Her Majesty The Queen. What really sets them apart is their use of the time-honoured process of die-stamping, which you get to witness in a behind-the-scenes tour of Barnard & Westwood’s London workshop.

Tickets to the Theatre 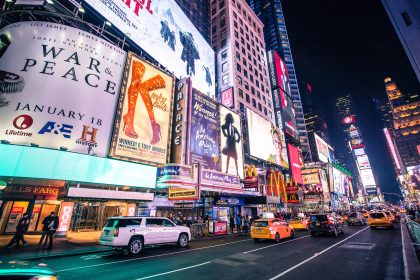 Take your favourite culture vultures for a night on the town with a trip to the theatre. Who wouldn’t want to be surprised with front row seats for some world-class theatre? Even if you book the tickets online, make sure you print them out on paper; that way you can stick to the first-anniversary theme.

Before the show, enjoy some romantic pre-theatre dining at one of the city’s best Michelin star restaurants. The whole night of theatrical romance is a great way for them to get out of the house and do something together as a couple. 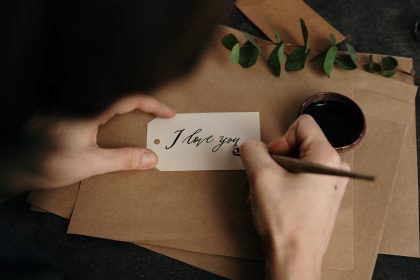 This 1st anniversary gift is ideal for the couple who’s addicted to their laptops, tablets and smartphones. Help them disconnect from the digital world with a beginner-friendly modern calligraphy class. They’ll learn the fundamentals of modern calligraphy writing, a millennia-old therapeutic art form using a nib and ink.

After their class session, maybe they can write a beautiful love letter to each other instead of a text? 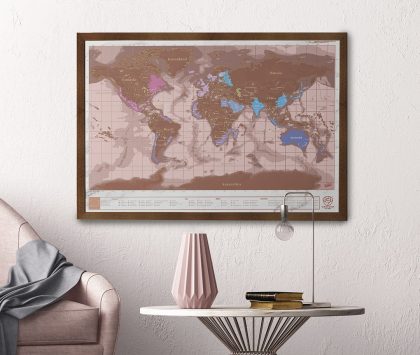 Are they a travelling couple that’s always itching to go travelling? Let the pair of wanderlust seekers capture their bucket list travels with a stylish scratch map. The personalised map of the world allows them to record their adventures by scratching off their visited destinations. A beautifully styled world map lies underneath, which they can proudly hang in their home as a reminder of their many adventures.