The kaleidoscopic colors of opal and tourmaline have been compared to galaxies, rainbows, and fireworks. October babies are bestowed with gemstone gifts of great beauty and shimmering colors. Making the tenth month an enviable one for birthstone collectors.

Where opal contains within itself a vast spectrum of light and color, tourmaline distributes its many different hues amongst individual crystals.

These two October birthstones both make magnificent centrepieces for any necklace or tiara. They give anyone adorned by them an ethereal, otherworldly quality.

Whether you were born in October or simply want to know more about these precious gems, this article will answer all your October birthstone questions.

What Are The October Birthstones?

Opal was the original October birthstone. But more recently tourmaline got added to the assortment. Birthstones offer everyone an opportunity to celebrate their birthday in a special way.

All twelve months of the calendar year are assigned one or more precious gems to commemorate the birthdays of everyone born in each month.

Crystals and precious stones have long been a subject of human fascination. People from almost every culture believe they have metaphysical or medicinal properties.

Gemstones have existed for over 4 billion years. Humans have been mining, wearing, and utilizing them for thousands of years. The order and structure of birthstone assignment has existed for centuries. 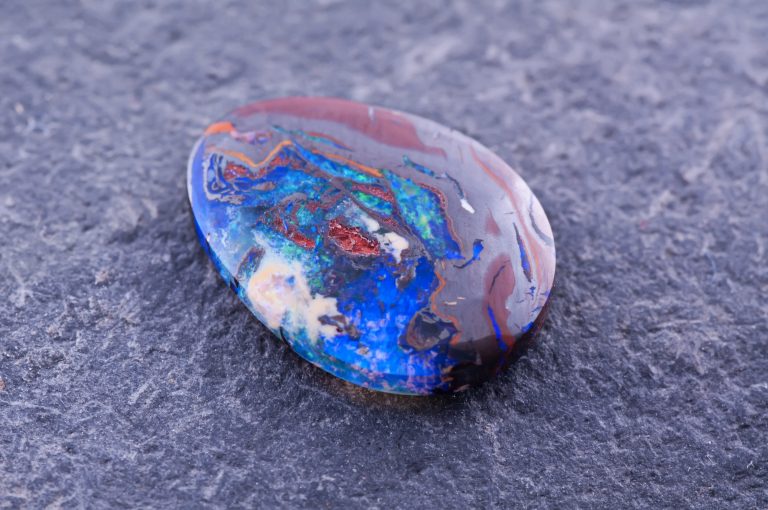 Perhaps the most magical-looking of all precious stones, the opal birthstone holds a multitude of hues and reflections. This gives it a constantly sparkling, flickering appearance.

Polished opal birthstones such as the fire opal are typically pale and pearlescent with brilliant, random streaks of rainbow colors emanating from within. The visual effect is called “play of color”. It’s said to contain the powers of all precious gems combined, talk about a special October birthstone!

Opal’s uniquely vivid and shifting appearance has prompted many to believe that this October birthstone is capable of having metaphysical properties. The ancient Greeks believed opals could bring forth the gift of prophecy, and could even protect wearers from evil.

It’s thought that opals are formed when rainwater trickles down into rock and remains there until the silica has dried out. The shifting colors we see in opals are caused by a large quantity of differently-sized silica spheres. Light bounces off these spheres and reflects in different colors.

With such an unbelievable array of bright and enchanting hues, it should come as no surprise that in 2008, NASA discovered that opal deposits could be located on the planet Mars. 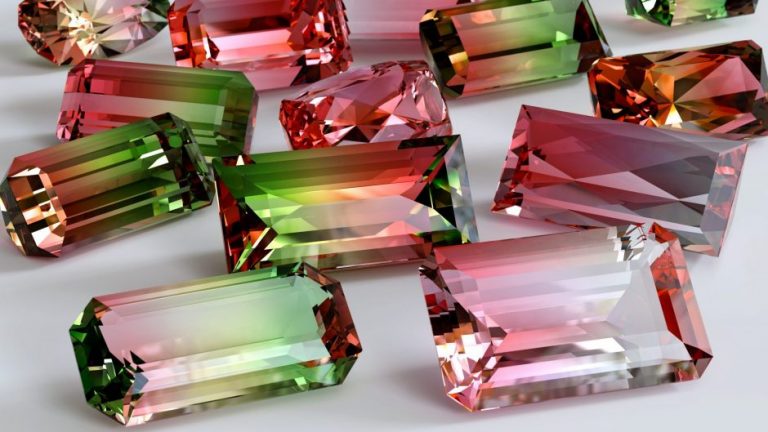 Tourmaline is a high-value precious gem that’s found in a variety of equally wondrous and vivid colors. Said to inspire artistic expression, this October birthstone can be found in vibrant shades of pink, purple, orange, green, blue, and even black.

Derived from the Sinhalese word touramalli – which means “stone with mixed colors” – very few gemstone types can match the broad variety of colors that tourmaline possesses.

Over the years, many people have mistaken the warm, blushing tones of red and pink tourmaline (now referred to as rubellites) for rubies. Indeed, one of the “rubies” in the Russian Crown Jewels was unmasked in the 1800s as a misidentified tourmaline rubellite.

The different tones of tourmaline are said to inspire different attributes and properties, giving October babies many choices for a single October birthstone. The pink shades of watermelon tourmaline most often get associated with love and romance. While the vivid green and black tourmaline stones are a source of compassion and self-confidence. Whichever variation of the October birthstone you pick, they can all give you a little boost in life.

The tourmaline birthstone is most easy to find in places such as Brazil, Pakistan, Afghanistan, Mozambique, Madagascar, and Kenya.

What Color Is The October Birthstone?

Due to the extravagant array of colors supplied by both opal and tourmaline, it’s difficult to determine just one birthstone colour for October.

It is perhaps fair to say that there is no one color for an October birthstone, but rather a multitude of colors. A stunning rainbow variety of intensely different pigments and reflections are attributed to the October birthstone duo.

Is the October Birthstone Opal Or Tourmaline?

The reason for multiple birthstones per month is practical – over enough time, precious gems go in and out of fashion or become so rare and expensive that regular people cannot afford them for birthstone jewelry.

When big changes hit the gemstone industry, often the birthstone structure is adapted to accommodate for those changes. That too has happened for the October birthstone.

Why Are There 2 Birthstones For October?

The reason for there being two birthstones for October instead of one is due to the simple fact that variety makes for a more accessible and flexible approach to purchasing birthstone jewelry.

Around the world and throughout many different cultures, birthstone jewelry is taken very seriously. The allowance for multiple birthstones per calendar month promotes accessibility and provides people everywhere with an increased number of options.

Two is better than one – having multiple options for an October birthstone means that people can both grow their October birthstone collection even further or simply be given the luxury of choice when it comes to choosing a birthstone that best reflects their individual personality.

Purchasing and owning a precious October birthstone requires some knowledge and experience in the proper care of stones and how to store them safely. There are special ways to care for opal and tourmaline.

When it comes to caring for a precious October birthstone, a gentle hand and cautious usage is advised. Whether your birthday is in October or not, anyone can enjoy the supreme beauty of these rainbow-colored gems.