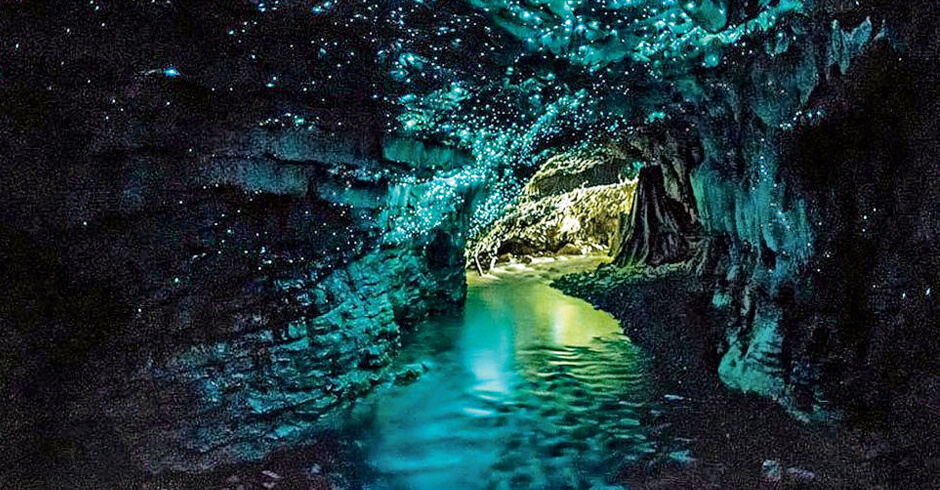 Deep within the caverns of Waitomo, New Zealand, a spectacular sparkling symphony lights up the jagged stalagmites and stalactites…

The glowworm Arachnocampa luminosa is unique to New Zealand. Thousands of these little creatures gather in Waitomo Caves to radiate their unmistakable and arresting luminescent light.

The legend of the Waitomo Caves began more than 30 million years ago, with the creation of limestone at the bottom of the ocean. Yet the caves remained untouched until just 118 years ago, when local Maori Chief, Tane Tinorau, and an English surveyor, Fred Mace, went to explore. Local Maori people knew of the caves’ existence, but the subterranean caverns had never been extensively explored.

As the pair entered the cave, they were awestruck by the myriad of tiny, blue-green glowing dots that lined the ceiling. With candles as their only lighting, they investigated the expansive caves, finding the endlessly intricate and gloriously unpredictable limestone formations that make up these incredible glowworm caves.

It is the bioluminescent glowworms that provide the caves’ main charms, however. This variety of the creature is endemic to New Zealand, a species of gnat. Both the male and female glowworm glows intermittently throughout the pupa stage but, when it comes to emerging, the male’s glow dims so that it is barely noticeable, while the female’s glow increases. The glow from the female is believed to be in order to attract a male. After successfully accomplishing this, the female lays a stellar batch of about 130 eggs: her legacy after just a few days of life.