It’s no longer true that the only world class wines are the ones made in Europe. Some of the finest varietals are now being produced in New World wine regions including South Africa, New Zealand, Australia, Chile and Argentina. So what does the term “New World” really mean when it comes to wine and where can you find some of the best vineyards?

You have probably heard the terms “New World” and “Old World” thrown around in wine drinking circles but you might not be clear on the distinction. The “New World” refers to countries that were established by colonies of European exploration after the 15th century – essentially anywhere other than Europe and the Mediterranean. Some of the Old World wine producing countries include France, Italy, Spain, Portugal, Germany, Greece, Lebanon, Austria, Israel, Hungary, Croatia and Switzerland. Some of the New World wine producing countries include Argentina, Chile, South Africa, New Zealand and the USA.

What is the Difference in Taste?

There are certain taste characteristics that wines from the Old World embody, compared to the wines of the New World. Generally, Old World wines tend to be lower in alcohol, more restrained in flavour, lighter-bodied and more subtle. Wines from the New World tend to be full-bodied and have bolder fruit flavours and a higher alcohol content. Of course, there are exceptions to this rule and there are a great variety of wines that are produced by both Old World and New World countries. 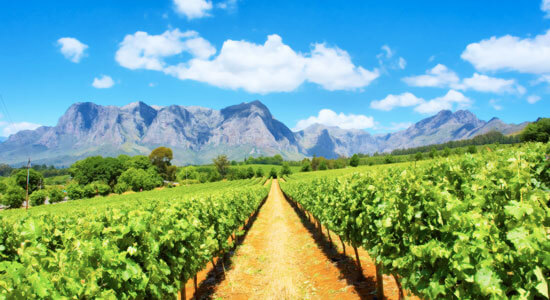 A vineyard near to Cape Town, South Africa

Where to Find New World Wine

So if you want to try some of the best examples of New World wine, where should you look?

The first wine in South Africa was produced by Jan van Riebeeck, the founder of Cape Town, in 1659. The Cape Winelands of the Western Cape Province are now the largest wine producing region in South Africa. The wines produced here range from strong and sturdy Rhone-style red wines to fragrant Sauvingon Blanc varieties.

The Napa Valley in California has the perfect combination of rich volcanic soil and mild Mediterranean climate that allows it to grow some of the best chardonnay, merlot and cabernet sauvignon grapes on the planet.

Take this Napa Valley Wine and Gastronomy Getaway. It includes two full day private wine tours around Napa as well as three nights stay in a five star boutique hotel nestled within the vineyards and a dinner for two cooked by a three-Michelin star chef.

The wine history of Chile dates back to the Spanish conquistadors brought over vines with them as they colonised. Chilean wines have ranked very highly in international competitions and there are many talented producers creating top quality products. Some of the most popular types include Merlot, Carmenere, Sirah, Malbec and Sauvignon Blanc.

These are just a few examples of where you can find the best wines the New World has to offer.