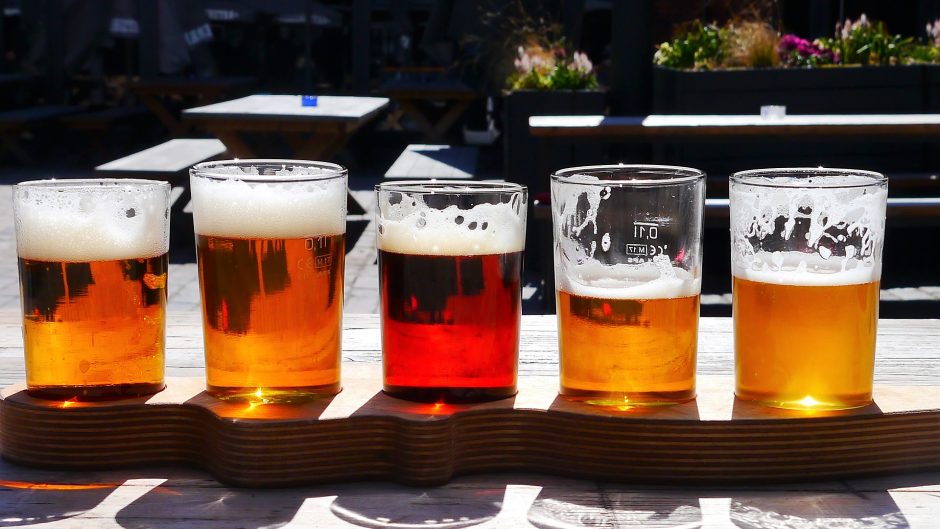 In the past, a large bulk of the beer tourists that flocked to New Hampshire Breweries each year came for the Budweiser Experience at the Anheuser-Busch factory in Merrimack. Since the Budweiser parent company moved its headquarters (and the Clydesdales) to St. Louis, however, smaller breweries have finally been given their time to shine.

There are now well over 80 breweries in the Granite State and we have selected the five best breweries in New Hampshire for you to visit:

If you are looking for the best craft beers in New Hampshire, look no further than Stoneface Brewing Company. This well-established production brewery and tasting room in Newington is responsible for no less than five of New Hampshire’s top 10 craft beers, according to Beer Advocate.

The 12 rotating taps in Stoneface’s industrial-style tasting room (in full view of the brewery’s elaborate steel vat brewing system) feature intriguing lagers, innovative IPAs and pale ales, flavoursome dark ales and an ever-expanding sour programme. These award-winning brews (including some brewery-exclusive releases) can be enjoyed along with some scrumptious Southern cuisine under the vibrant hanging lights of the airy tasting room. Add this to the venue’s carefully curated playlist, friendly staff, and jam-packed events calendar and you have all the essential ingredients that make Stoneface Brewing Company one of the best breweries in New Hampshire.

Founded in 1995, the Woodstock Inn Brewery is one of the oldest and most popular New Hampshire breweries. It is an all-in-one beer and tourism destination in the picturesque town of North Woodstock.

The brewery is housed within the historic Woodstock Inn, an elegant collection of buildings of expansive sizes that take nothing away from their quaint, New England charm. Visitors to the Woodstock Inn Brewery actually have four pubs from which to choose: The Main Bar, The Brew Pub, The Tap Room, and the Dam Bar (outdoor patio).

If all that sounds exhausting, remember that you can always stay the night at one of the Woodstock Inn’s 40 gorgeously appointed guestrooms. Of all the New Hampshire breweries, this is arguably the best place to visit if you are bringing the whole family along.

At Smuttynose Brewing Company in Hampton, they are all about fur babies. Just eight minutes from Hampton Beach, this well-established beer house is a 17-acre paradise for beer lovers and their four-legged friends on Hampton’s historic Towle Farm.

With over two dozen acclaimed New England beers on tap, a tasting bar and beer garden, a free disc golf course, regular dog adoption days and other festivities, free brewery tours, and more, it is easy to see why Smuttynose is one of our favourite New Hampshire breweries.

Opened all the way back in 1991, Portsmouth Brewery was the first-ever brewery in New Hampshire. It has become a mainstay on the New Hampshire beer circuit and now serves over 250 000 pints of beer annually. Its Russian imperial stout, Kate the Great is widely regarded as the most sought-after beer in America.

Similarly to the Woodstock Inn Brewery, the Portsmouth Brewery incorporates several venues into one at its Market Street location in downtown Portsmouth. At street level, The Brew House has a bar, two lounge areas, four main dining areas, a beer garden (open in fine weather), a huge private table for special events, and an in-house restaurant. But downstairs, in the Jimmy La Panza Lounge, is where the party is really at. Here, you will feel like you stepped back in time and straight into an ultra-cool speakeasy saloon, where you can enjoy live entertainment, additional guest beers, even more amazing food, and games like shuffleboard, along with your brew.

The view alone is reason enough to visit Schilling Beer Company in Littleton. Perched on the banks of the magnificent Ammonoosuc River, a circa 1798 grist mill (in pristine condition) houses the brewpub of this immensely popular alehouse. This is artfully juxtaposed against the brewery’s Scandinavian farmhouse-inspired Store & Tasting Room, just a few yards away.

While the brewpub is the picture of traditional New England, the Store & Tasting Room is a marvel of modern construction, with high ceilings and towering glass facades – the overall visual effect, particularly from the deck over the river, is simply stunning.

But this spectacular vista is just one of the many reasons why Schilling Beer Company is undoubtedly one of the best breweries in New Hampshire. As a progressive, European-inspired small-batch brewery, Schilling is best known for its Czech- and German-inspired lagers and ales. The tasting room features 16 rotating draught lines, including old favourites and experimental pub exclusives. Enjoy these exceptional brews around the fire in the rustic tasting room or even in the idyllic beer garden, when the weather is fine.

It’s clear that New Hampshire is following beer industry trends and that anyone who loves a good brew will find one here!