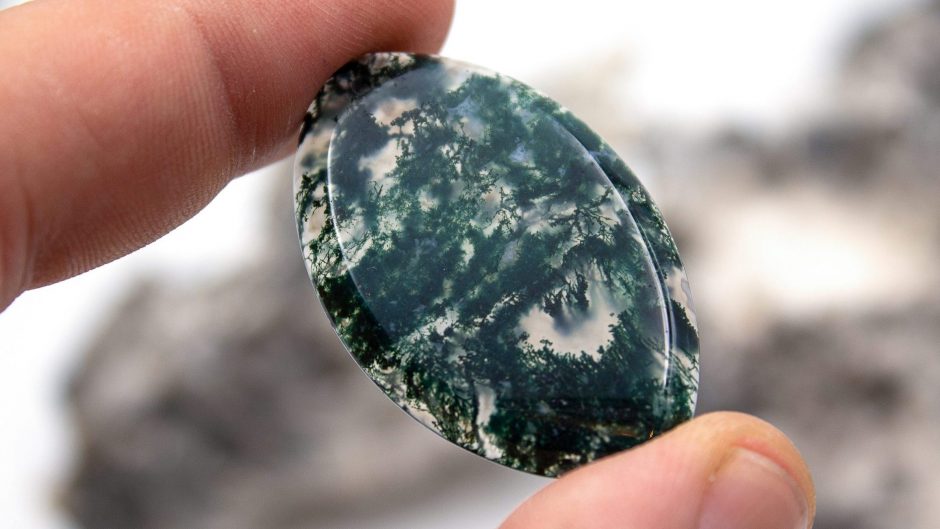 Moss agate is truly a gemstone unlike any other. It has a beautiful marbled green effect on its surface and has plenty of significant meanings attached to it. The stone is also said to be able to help heal numerous physical ailments and have wonderful psychological effects on its bearer.

No two moss agate stones are the same, making each and every one unique.

Intrigued? Join us as we dig a little deeper and find out more about green moss agate meaning, agate properties and other fascinating facts.

What Is Moss Agate? 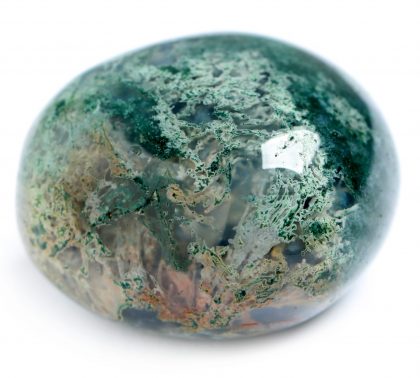 Moss agate is what’s known as a semi-precious gemstone. It’s formed from silicon dioxide and is a form of chalcedony, which includes minerals that are green in colour embedded in the stone.

The stone gets its name from the green specks in it, all of which resemble elements of nature. These colours are formed due to trace amounts of metal present as impurities, like iron or chrome. However, moss agate is not a true agate in the sense that it doesn’t have concentric banding.

Despite its name, moss agate doesn’t actually contain any organic matter. In fact, it’s usually formed from volcanic rocks that have been weathered.

Where Is Moss Agate Found?

The majority of moss agate is found as fragments of weathered volcanic rocks. For hundreds of years, green moss agate was used mainly for decorative purposes.

The world’s supply of moss agate mainly stems from central Europe, the western part of the United States of America, India, Uruguay and Brazil. Green agate is quite commonly found, but some of the stones are further dyed to improve their colour.

Moss agate is a naturally occurring stone that’s mostly sourced from fragmented volcanic rocks. It’s not manmade, but when sold commercially, is often dyed to achieve a wider range of different shades, or to intensify its natural colours.

How Hard Is Moss Agate? 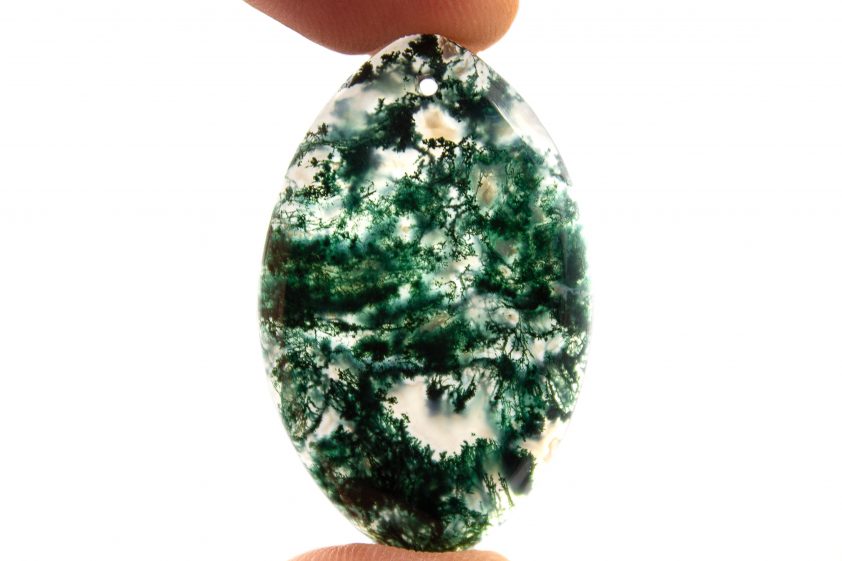 One of moss agate’s properties is the fact that it is a fairly hard stone. It rates at a score of 7 on the Mohs Scale. If you have a moss agate stone, it’s best to keep it away from other stones, as the hardness of the agate may scratch the softer stones and damage them.

What Is The Green In Moss Agate?

Green moss agate is so coloured because it’s a form of chalcedony that includes minerals of a green colour. When embedded in the stone, the minerals form filaments and various patterns that make it look as though moss is present.

The base of the stone is usually clear or milky white, making the moss-like pattern all the more striking.

What Is The Meaning Of Moss Agate?

Like many other gemstones, moss agate has metaphysical properties that carry deep meaning.

One of green moss agate’s meanings is that it encourages a sense of tranquillity and emotional balance. It’s said to be extremely helpful to those experiencing a strong sense of aggression or any other overwhelming emotions.

Moss agate brings calm and helps draw us closer to nature. It makes us feel more patient when we need to disconnect from the chaos and bustle of the modern world.

Furthermore, moss agate is also associated with budding friendships. Many people wear the gemstone when meeting new people, as it’s supposed to foster a sense of connection and help build a solid foundation for friendship.

What Is Moss Agate Good For?

What is Botswana Agate? Gemstone Guide with Meanings & Properties

How Much Are Moss Agates Worth?

The values of all gemstones are dependent on a number of factors, and moss agate is no different. In general, however, the value of this stone is quite modest. The price mainly reflects labour or artistry more than the value of the gem itself.

Larger moss agate stones, or ones that have a very distinctive colour or pattern, can fetch a little bit more as they will make for a unique addition to any collection.

What Chakra Is Moss Agate? 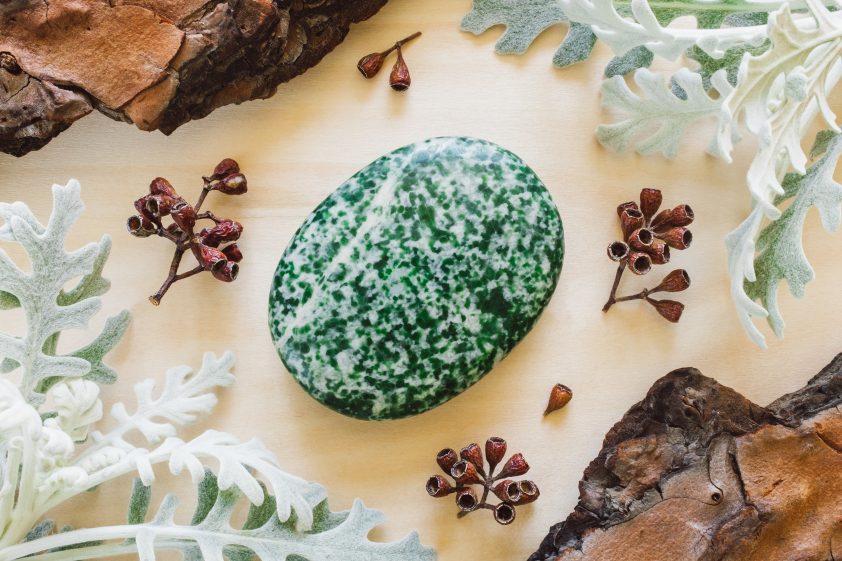 Moss agate is associated with the heart chakra. It’s said to be able to stabilise one’s aura and eliminate negative energies. It has a very powerful cleansing effect on the body.

Located near the middle of the breastbone, the heart chakra regulates our interactions with the world beyond ourselves and helps us control and embrace what we resist.

Moss agate is said to help resolve any blockages and balance the heart chakra. This helps bearers understand their own needs and emotions clearly and lets them better process the ebbs and flows of emotional relationships, accept any changes that come along with them and understand their cyclic nature.

How Do I Know If I Have Moss Agate?

Agate stones naturally occur in various different colours. However, moss agate is quite unique in the sense that it looks as though moss has formed inside of the stone itself. The stone is usually milky white or translucent.

Moss agate is identifiable by any medium to dark green patterns or inclusions on the stone. Furthermore, moss agate can be identified by its natural ‘polish’. These stones tend to look as though they have just been cleaned off, as they all have a natural sheen about them.

Fabulous Fire Agate: Meanings, Properties & How to Use This Fiery Gem

Although moss agate carries a very modest monetary value, the stone itself is quite beautiful and adds positive, welcome value to its bearers in several other ways. Milky whites and green show off Mother Nature’s impressive decorative abilities and at the same time, moss agate properties offer bearers plenty of healing.

From psychological clarity to physical strength, moss agate is the perfect stone to have nearby to stay healthy, help clear your mind, cleanse and better understand your own psychological and emotional needs, as well as those of others. A gorgeous stone with a difference, moss agate is one of the many green gemstones that make a fantastic addition to any collection.

Discover more special green stones in this List of Green Gemstones, or have a look at these other types of agate stones below: