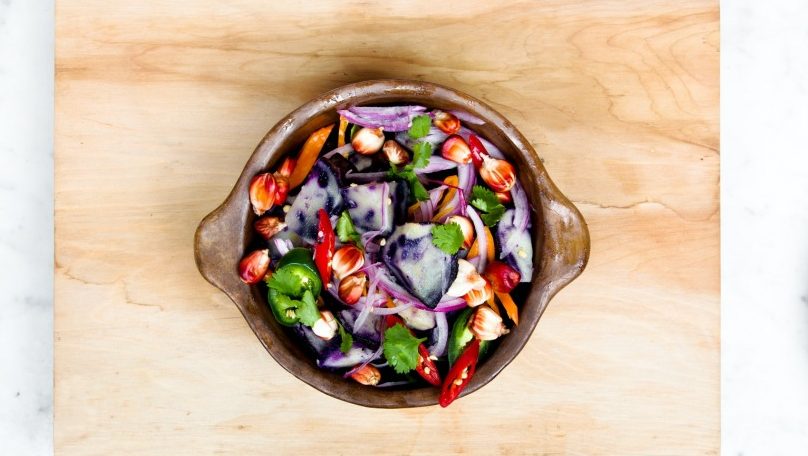 It’s a highly competitive business and Chicago’s Michelin star restaurants go out of their way to stay on top of their game. Many even go the extra mile. For example, Smyth & Loyalist’s John and Karen Urie Shield keep a 20-acre farm provisioning their daily menus. But more on them later.

Our round-up of 17 Michelin star restaurants in Chicago is a long one, so let’s take our seats.

Chef Grant Achatz’s three-Michelin star restaurant is said to be a sensory experience. Chef Grant Achatz is known for a very modern approach to haute cuisine and his team produces modern, deconstructed fine dining. Think dry ice and theatrical, exotic fruits. Having renovated from a dark and sexy interior in 2016, Alinea is now a light and airy timeless space.

There is a Gallery menu of cutting-edge molecular gastronomy of 16-18 courses, followed by a Salon Menu of 10-12 courses. The ultimate menu is The Kitchen Table. The tasting menu prices range from around $225 to $475 a person but every experience will be a memorable one. A signature ending is Achatz’s helium Taffy balloons, said to induce much laughter and merriment.

Ever is a larger restaurant seating 75 diners and up to 10 diners in a private room. There is a Prix-fixe menu with 8-10 courses which takes up to 2.5 hours. Each dish is a masterpiece by Chef Curtis Duffy and business partner Michel Muser. The interior decor is softly-lit and sexy, designed by James Beard Award-winning architects LSA. Ever’s menu promises a peerless dining experience that’s refined, ambitious and intense—with a price tag to match.

Smyth and the Loyalist – 2 stars

John and Karen Urie Shields serve farm-to-table fine dining on the first floor (The Smyth), while the sultry bar below (The Loyalist) offers some of the best less fussy fare and burgers and cocktails available by day in Chicago. Situated in an industrial but welcoming building, Smyth & the Loyalist offers 3 tasting menus ranging from entry level, to classic and luxury. The Omaha is a 19-course menu inspired by the Chef couple’s time spent in Virginia honing their skills. The offerings change daily based on what’s in season on their 20-acre farm south of the city.

Sharing its space with a famed brewery, Moody Tongue’s Executive chef Jared Wentworth oversees an intimate 28-seat restaurant, offering a 12-15-course tasting menu based on seasonal ingredients. For beer lovers and beer pairings, this is a heavenly match for hop lovers under the watchful eye of brewmaster Jared Rouben.

Situated in the heart of the Lincoln Park area, Chef Lee Wolen runs the flagship of the Boka restaurant group. There is an 8-course tasting menu, served in 3 rooms, including the Solarium which is semi-outdoor. Chef Wolen employs flawless techniques from the most complicated to simple dishes on his menu. Must-try dishes include chilled beef tartare, grilled octopus, and ricotta dumplings.

Chef Phillip Foss has quite a back story. When Covid closed face-to-face dining at restaurants, he had to adapt like so many others. The EL stands for elevated so the menu includes the likes of French fries and ice cream, and that’s no ordinary ice cream, we might add. EL Ideas currently offers set, group-based seatings from Tuesday to Saturday in an open floor plan space. The team is currently focused on making good food more accessible and less finicky. There are still 10-course tasting menus but they’re more approachable.

Elske means “love” in Danish and is a tribute to Scandinavian inspired cuisine and Copenhagen. David and Anna Posey create and serve their fine dining in a minimal and fresh space with soft lighting and a warm ambience. The tasting menu is fairly reasonably priced at $115 per person, but be prepared to be blown away by the servings on communal tables from the open kitchen. A must-try dessert is Anna’s sunflower seed parfait with sour honey, liquorice and bee pollen. They will also accommodate dietary preferences such as dairy and gluten-free with advance notice.

12 of the Best Michelin Star Restaurants in Washington DC

Jenner Tomaska and Katrina Bravo have “reimagined the tasting-menu model with philanthropy and art integrated into the foundation of the experience, an expression of their shared vision for the community-focused restaurant”, according to their website. The tasting menu evolves seasonally and events with local artists and creatives are often featured. With fine attention to detail ̶ their serving vessels are superb and spot-on ̶ Esmé is considered one of Chicago’s best dining experiences.

Chefs Zach Engel and Andres Clavero offer prix fixe menus with more than a nod to the cuisine of the Middle East. Chef Engel was awarded the James Beard Rising Star Chef award in 2017. Just take a look at their menu, offering various ranges of 4-course “choose your adventure” options. And your chosen “adventure” is very reasonably priced too.

Korean-born Chef B.K. Park is recognised as one of America’s premier sushi chefs, having worked with seafood for more than 20 years. The restaurant has held its Michelin star since four months after opening in 2019. The omakase menu is $175 with an optional beverage pairing of $95.

Next is part of the Alinea Group showcasing world cuisine. Located next to the old meatpacking district, the team at Next release prix fixe menus quarterly. and are known for their innovative serving style. Their gallery showcase gives dinners an idea of the diverse adventure they offer. There is a ticketing system in which diners pay up-front, like theatre-goers.

This omakase restaurant is very small with seating for only 8 diners. There are 2 seatings per evening. Chef Sangtae Park has been cooking since childhood in his native South Korea. The restaurant is a sushi-focused omakase restaurant in Chicago’s West Loop area, which prepares and serves sushi with respect to the traditional way but with the added something from Chef Sangtae’s Korean heritage. There is a 16-course tasting menu.

Located in an unassuming alleyway, the bare brick walls and space for 28 diners offers an intimate experience for discerning diners. Chef Noah Sandoval’s open kitchen exudes a vibrant ambience with a single tasting menu at $215 serving 14-courses from around the world.

Serving the food of Portugal and Spain’s Atlantic Coast, Porto is an Iberian lover’s dream with deep azure and ultramarine blues and the light and vibrancy only found in those countries. Using traditional curing techniques and wood-fired ovens, Porto is a love poem to Galicia and Portugal. There is a tasting menu of $115 but other menus are on offer.

Chef Michael Carlson’s menu offers a cornucopia of taste sensations. Like most other restaurants on this list, Schwa has received many accolades from food critics and is recognised for its fine dining.

Chef Carlson has worked with Grant Achatz and Heston Blumenthal in the UK. He received a best chef nomination from the James Beard Foundation in 2010.

Head Chef Andrew Zimmerman benefited from classic French training and serves inventive American cuisine with seasonally inspired menus. His creations are touched by the subtle influences of Asia, Korea and the Mediterranean, closer to home. Sepia is devoted to supporting local growers and producers, particularly those who follow sustainable practices.

Oh and let us not forget, 7 Chicago restaurants are on Michelin Guide’s Bib Gourmand list for their affordability and culinary excellence. They are:

From this list, it is clear that Chicago is a foodie’s dream from the high priced right down to the positively reasonably-priced Michelin star restaurants. It’s a very eclectic mix so there is bound to be an offering to suit a wide range of tastes.

With 23 Michelin star restaurants in Chicago to choose from, the Midwest is no slouch when it comes to heavenly victuals.