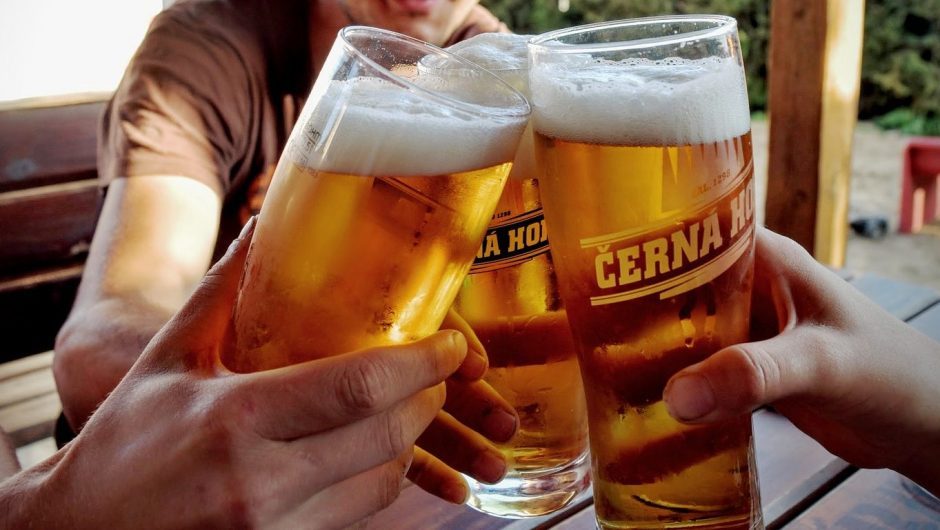 Have you ever sat around on a hot, sunny day craving a delicious alcoholic beverage to keep you cool? Chances are a Mexican beer is exactly what you need, as they are a staple for summertime relaxation worldwide.

Let’s get to know all about the history of Mexican beer and the best Mexican beer brands on the market. Yes, Corona is in there too – the thirst-quenching kind!

The History of Mexican Beer

Mexican beer has a long and storied history, leading it to be one of the most loved types of beer on the planet. These beers are fun and exciting and have a twist when it comes to taste.

Mexican beer production commenced sometime around the 19th century when the Spaniards decided they needed to keep themselves cool in the sizzling Mexican sun.

By using barley and wheat the Spaniards went about on their brewing mission to try and create the perfect beverage for the Mexican climate.

Production, however, was limited due to a scarcity of grains in the country.

Winning a war with beer….

After Mexico was engulfed in their war for independence against Spain, the soldiers decided the best way to celebrate was by providing each fighter with delicious home-brewed beers and production ramped up drastically.

What Are The Major Beer Companies In Mexico?

By the end of the 1920s, Mexico had established over thirty breweries. Two of these companies consolidated themselves as the “big two”: Grupo Modelo and Cerveceria Cuautehmoc–Moctezuma became serious role-players in the Mexican beer industry.

By the turn of the 20th century, Mexican beers had stolen the limelight in the industry. This was helped even further because of the prohibition on beers in the United States at the time, which in turn made Mexico one of the favourite holiday destinations for Americans who just wanted to relax in the sun with a cold beer.

What Are the Different Styles of Mexican Beers?

There are a variety of different types of Mexican beers, each with its own tastes and pairings.
Mexican beers primarily include lagers, pilseners, and Vienna-style light and dark beers, while some local microbreweries have begun producing ales too. Either way, while you’re in Mexico there will always be a beer that will scratch your proverbial itch, whatever it may be.

By examining the most popular style of beers in Mexico it becomes pretty clear that Mexico likes to dabble and perfect the classics. By producing mainly lagers and pilseners it’s safe to say that Mexico enjoys their pale ales.

Lagers and Pilseners are some of the most popular and widely consumed commercial beers around the entire planet. Mexico is tapping into the worldwide market which promises to enjoy its classic, yet unique, tasting beers.

Despite being experts in the classics, the Mexican beer industry has also tapped into the party/vacation lifestyle that tends to be associated with their beautiful country by experimenting with beers and coming up with some of the most interesting beer-related recipes. The Michelada is just one example of such experimentation. 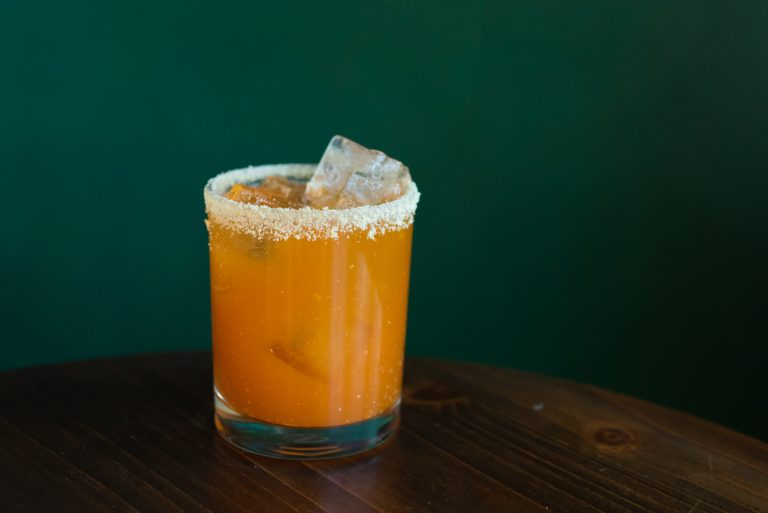 Comprising of a mixture between cold-light beer, freshly squeezed lime juice, hot sauce, and another savoury ingredient of your choosing, a Michelada is essentially a fun beer-like cocktail.

When mixed to perfection a Michelada can be one of the most refreshing and rejuvenating cocktails on the market. It’s authentically Mexican and combines all the flavours of Mexico into one gorgeous-looking cocktail that is sure to make you always remember your time in Mexico – or if you’ve had one too many, make sure you can never remember it!

But that’s not all…

What About The Chelada?

Another product of beer experimentation in Mexico is another beer cocktail known as the Chelada. By infusing any of your favourite Mexican beers with a fresh squeeze of lime juice and a salt rim, this cocktail is as easy to mix up as it is refreshing and irresistible.

What differentiates this cocktail from the Michelada is its perfect simplicity and less savoury nature. If you’re looking to get into beer cocktails but don’t want to jump headfirst into the height of experimentation, then the Chelada may be perfect for you!

But if you’re looking for even more simplicity there are an array of different popular Mexican beers that can be enjoyed on their own.

What Are the Most Famous Mexican Beers? 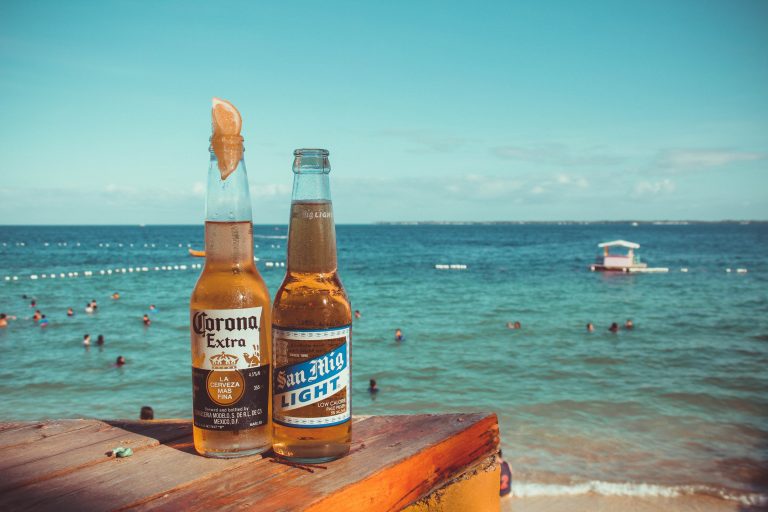 If you’re a beer enthusiast there is little doubt that you’ve heard of, and probably tried, a lot of Mexican beer in your time.

Here are some of the favourites from top Mexican beer brands:

A Corona Extra is not only one of the most popular beers in Mexico, it’s one of the most famous beers worldwide and has been enjoyed by many for the past two or three decades after its rise to fame.
Pretty much all convenience and liquor stores around the world will stock this staple of the beer industry. It’s a little more on the expensive side in countries not situated in the America’s, but what you get with Corona is one of the best and most unique tasting beers around. And don’t forget that slice of lemon in the neck!

When you crack open a can of Tecate Original, you already know what to expect. A crisp and refreshing malty beer with an aftertaste so delicious that once you’re done you’ll already be heading to the fridge for another.

Probably the best-selling dark beer in Mexico, the Modelo is made for those hardened and experienced beer lovers who want to experience and enjoy the strong taste of an authentic Mexican beer.

So, we’ve established that Mexican beers are unique, popular, and especially delicious. It’s time we acknowledge the acclaim and awards these beers have received for being exactly that.
One of the most widely recognized beers in Mexico is the Carta Blanca and it has had a podium finish at the World Beer Cup, placing a respectable third.

The Carta Blanca became popular due to its crisp and smooth taste. It was the first-ever premium beer to come from Cerveceria Cuauhtemoc – which is one of the “big two” in the Mexican beer industry, as explained previously.

The Negra Modelo is another of the best beers that Mexico has on offer and has taken home awards for its bittersweet taste and infusion with fruits and nuts. The Modelo is a dark beer that is on the lighter side in terms of its alcohol content, boasting a light 5.4%.

Beyond the classics we just examined, Mexico also houses a fair few microbreweries that have been perfecting their craft beers over the last couple of decades.

Forget what people say about craft beers and hipsters. These beers are truly special and need to be experienced if you are a true connoisseur

Some of the darker craft beers in Mexico include the Maquahuitl Black IPA and the Minerva Stout Beer. These have been described as dark with just the right tinge of bitterness. They are not too bitter to turn off prospective customers yet are bitter enough to tickle even the most veteran of beer drinkers.
On the lighter side, Mexico provides the Maria Bonita Blonde Ale and the Primus Tempus Dorada.

These beers are dazzlingly golden and are some of the most refreshing beers to enjoy while lying out in the beaming Mexican sun.

How To Enjoy Beer In An Authentically Mexican Way

In Mexico, beer is all about pairing and drinking correctly.

To drink beer the Mexican way must enjoy the beverage with some sort of accompaniment such as hot sauce or lime juice. These are what is done to create the beer cocktails described above.
It’s all about enjoyment and experimentation with beers in Mexico. It’s not as simple as cracking open a beer and drinking it. Instead, slice up a lemon or lime, stick it in your bottle or glass and grab the Tabasco sauce. Get funky with it!

When it comes to food pairings, there are a lot of Mexican cuisines that have been tailored to be enjoyed with Mexican beer.

If you’re enjoying one of the Mexican pale ales or smooth light beers try an authentic cheesy enchilada or burrito with your beverage. These pair well together as the wheat beers and their accompanying flavours complement the savoury flavours which emerge from the cuisine.

If you’re going for the darker side of beers, order yourself a beautiful dish of slow-braised carnitas. These carnitas pair so well with a darker beer that a lot of the time they are braised in a beautiful beer basting for hours on end.

How to Order a Beer in Mexico

Now that you’ve learned all there is to learn about beer in Mexico you need to ensure that you can order yourself a beer once you arrive.

In Mexico, the language is Spanish, and so, you’ll need to teach yourself the all-important question:

The answer to that will be the clink of a bottle opening!