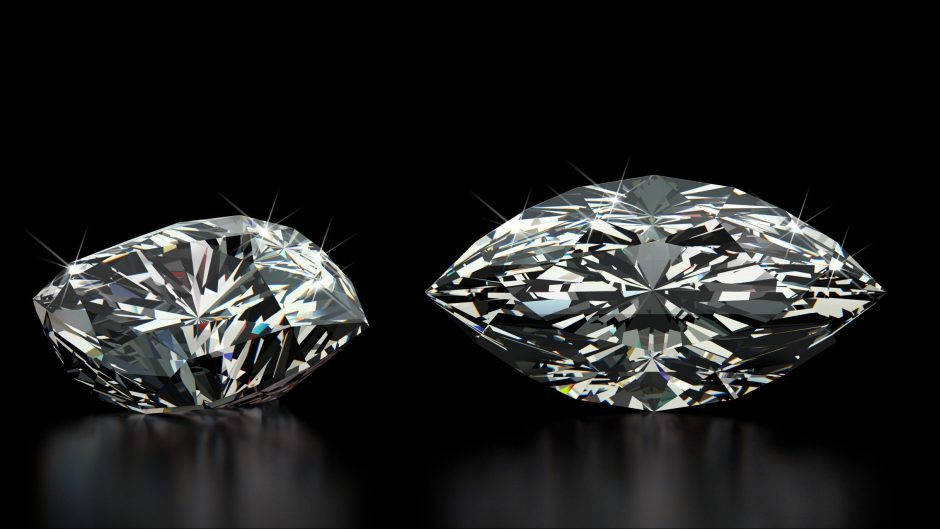 The diamond is one of the most loved gems around the world. Apart from their dazzling beauty, diamonds are among the hardest substances on Earth and are actually used in industrial processes as well as for jewellery – quite the paradox.

A rough diamond – mined but not polished or cut –is unrecognisable to most people, hence the phrase “diamond in the rough”: an entity of great value disguised by an unappealing or unremarkable exterior.

One cut that shows off the stone’s natural beauty is that of the marquise diamond. Marquise diamonds combine multiple elements and angles to achieve a classic and timeless look.

What Is A Marquise Diamond? 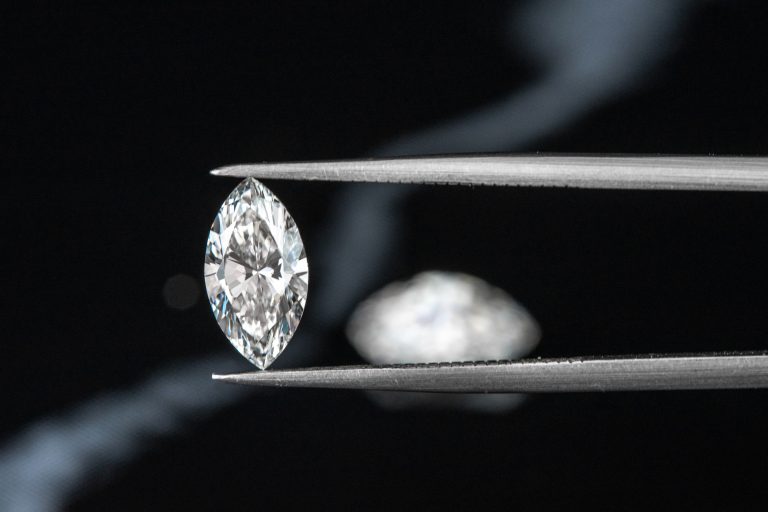 There are many diamond cuts, each with its own distinct beauty but all created to bring out different aspects of the stone: a marquise diamond, for example, has 58 facets, the same number as a round brilliant cut and cushion cut.

Marquise cut diamonds have also been described as “football-shaped”, although this term seems to be at odds with its elegant appearance. This cut creates diamonds with very broad crown surface areas, making them appear larger than they actually are. When worn in a ring, a marquise diamond can make the wearer’s look more slender.

What Is The Origin And History Of Marquise Diamonds?

The word “marquise” is derived from French, and refers to the wife of a marquis (nobleman) – also called a marchioness. A marquise (marchioness) can also be a woman who has a high social ranking in her own right – a noblewoman.

The origin of a marquise cut diamond lies in 18th century France, during the reign of King Louis XV. It is believed that the King wanted a diamond resembling the full lips of his lover, Marchioness Madame de Pompadour, Jean Antoinette Poisson. The result was a stone that indicated high social ranking in the French court.

What Are The Pros And Cons Of Marquise Diamonds?

All gemstones have pros and cons, and the marquise cut diamond is no exception. The two points of marquise diamonds unfortunately make them susceptible to chipping – damage that can’t be repaired. To avoid this, it is advisable to set the stone with prongs to protect both tips.

Another common issue with this diamond cut is the “bowtie effect”. This can also happen with other longer and narrower gems and appears as a dark bowtie shape in the centre of the stone, when viewed from multiple angles. This can detract from a marquise diamond’s beauty, but can be avoided with expert cutting.

Despite these pitfalls, marquise diamonds remain among the most beautiful and timeless stones. The expansiveness of this diamond cut’s crown surface area makes it appealing to those who want a large stone for less money.

How To Select A Marquise Cut Diamond

Choosing a marquise diamond can be difficult, especially if you are unfamiliar with gemstones. A marquise cut stone could be very narrow, or slightly wider; elongated, or broader. With regards to the ratio between length and width, it comes down to personal preference, although the “classic” shape is considered to be the length to width ratio of between 1.75 and 2.15.

It is important to assess the stone’s symmetry before making a purchase, as irregular angles and unaligned points can easily spoil a piece of jewellery. Taking a closer look at a marquise cut diamond will show you whether or not it has fallen prey to the bowtie effect – a darkening at the centre of the diamond that detracts from its brilliant appearance.

What Is The Bowtie Effect On Marquise Diamonds?

As mentioned, marquise diamonds occasionally have what is called the bowtie effect, which can mar the stone’s natural splendour. The darkened, triangular shapes can be seen from multiple angles and are created by poorly cut facets.

Some diamond cuts, such as round, square or cushion, don’t have this fault, as their shapes, facets and ratios are innately flawless. These unwanted shadows in marquise cut diamonds occur when there is not enough light to illuminate all facets properly.

What are Asscher Cut Diamonds? Everything You Need to Know

What Are The Best Settings For Marquise Diamonds?

Marquise diamonds are fairly popular as engagement rings and have been worn by celebrities like Portia de Rossi, Victoria Beckham and Jennifer Lopez. Deciding on the perfect diamond setting is ultimately a case of personal taste, but there are some bases that bring out the stone’s natural beauty. Marquise diamonds are often perceived as graceful and timeless, and as such they lend themselves to halo and solitaire settings.

A halo setting is a classic choice for marquise diamonds, and consists of a ring of smaller stones that encircle or surround a larger one. Pavé diamonds are often used in this particular setting and create a stunning, glamourous look. This is a popular choice among those purchasing engagement rings, as it highlights the marquise diamond’s striking shape while also making the ring look bigger overall – conveniently cheaper than a stone with more carats.

Using a solitaire setting, in contrast, allows the exquisite gemstone to speak for itself – without distractions.

How Much Are Marquise Diamonds?

The price of a marquise diamond can vary greatly depending on a few factors; sometimes called the “four Cs”: cut, colour, clarity and carat. There is no one right way to cut a marquise diamond, but there are guidelines that can help to avoid issues like the bowtie effect – and that can enhance the diamond’s natural beauty. The price of a diamond also depends on its size (in millimetres, for example) and weight (carats).

Purchasing a marquise diamond is quite an investment, and should only be done through reputable dealers. As stones go, they are pricey but cost less per carat than some other diamond cuts.
Putting a price on a marquise diamond is difficult without knowing its specifics, but according to some dealers, a decent marquise weighing one carat could cost around $3700 – about £2750. Others offer a price estimate of between $3500 and $5500 (£2600 to £4088), but without assessing a specific stone’s quality it is impossible to put a price on it.

What Do Marquise Diamonds Say About You?

For some, choosing a diamond is simply a case of aesthetics. Others believe that the cut of a diamond can reveal something significant about the person who wears it. The origin of the marquise diamond gives it an aristocratic and glamorous air and people who opt for this shape can be vivacious and bold in their fashion choices. Marquise diamond rings are often worn by people who aren’t afraid to stand out and who value individuality, creativity and nonconformity.

How Popular Are Marquise Diamonds In The Us And Around The World?

Marquise cut diamonds are fairly popular although less common (and less favoured) than cuts such as round or cushion diamonds. People who appreciate the uniqueness of marquise cut diamonds often use them in engagement rings, as they are a bit different and tend to stand out.

There are a number of celebrities who have worn marquise diamond engagement rings, including Catherine Zeta-Jones, Victoria Beckham and Portia de Rossi.

There are many different diamond cuts, each with its pros and cons. Choosing a marquise diamond over another cut – round, cushion, or oval, for example – is largely a case of individual preference. A marquise cut diamond is most similar in shape to the pear cut, but often narrower. The shape has been defined by some as a hybrid of the round and pear cuts.

A Unique And Glamorous Choice

Although marquise diamonds are not as widely used as other cuts, they remain a popular choice for those who aren’t afraid to stand out from the crowd.