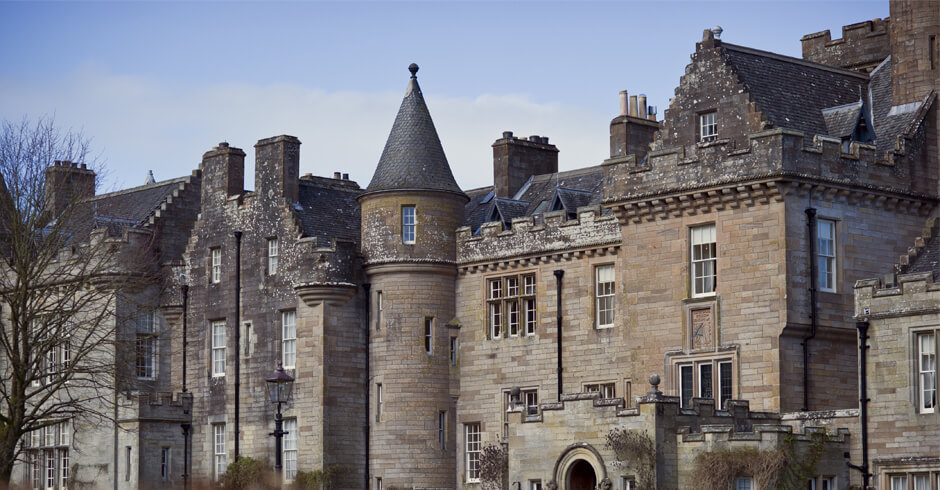 Back in the day, castles served as fortified structures built by and for monarchs to reside in opulently – and keep the commoners at bay. Nowadays, they’re more often associated with fairytales, theme parks and spooky goings-on. Yet many of these great buildings are being converted to something equally as luxurious as their Mediaeval counterparts. Here’s our pick of the world’s most magnificent castle hotels.

Perhaps somewhat surprisingly, Estancia la Candelaria is a French castle, inspired by a royal chateau in Normandy. Not your typical South American ranch then. In the grounds of the castle are charming forest bungalows and a private two-storey suite… inside a windmill. The grounds extend over 100 hectares. Keen tree identifiers will be pleased to know the grounds include around 240 different species of trees.
estanciacandelaria.com

The grounds of Glenapp estate are so large that the entrance is around a mile away from the castle itself. 5,250 hectares surround the castle for daytime explores, including deep glens, sprawling moorland, and spectacular rock cliffs. For night owls, there’s private stargazing on the edge of Galloway Forest Park, the UK’s first accredited Dark Sky Park, with renowned astronomer Steve Owens. The restaurant’s rather fine too, gaining 3 AA Rosettes for its impressive Scottish cooking which features fresh, local Ayrshire produce.

Take Me To Glenapp Castle >>

A Gothic castle, built in the fourteenth century, Zamel Reszel Kreativ has previously served as a church, prison and even a hunting lodge. The great space is taken up by just 21 rooms now, so it feels rather as though you’ve got the place all to yourself. In addition to the very large and luxurious rooms, the hotel also has rather the art scene, including the on-site Gallery of Modern Art and ongoing Fine Arts Days.
zamek-reszel.com

Dragsholm Castle is home to not one, not two, not even three ghouls. In fact, it is known to be the most haunted castle in Europe – with over 100 ghosts purportedly on the prowl in the property. Nowadays, the castle has been converted so that it includes a number of luxury rooms and an acclaimed gourmet kitchen. Beware, however, for one of the most famous ghosts is named the White Lady. Famous for her white dress, she was imprisoned between the walls of the castle by her own father for years. In the 1930s, renovators found a dead body in one of the walls. She was discovered in a white dress…

Take Me To Dragsholm Castle >>

In the heart of picturesque wine country, near to Bordeaux and Cognac, this Renaissance castle has been renovated to include the utmost luxury. The eight-hectare grounds provide a stunning outdoor swimming pool, tennis courts and landscaped gardens. What’s more, the market-inspired restaurant includes delicacies such as Gironde estuary caviar and Mirambeau honey.
chateauxmirambeau.com

Have you ever been to any of these castle hotels?