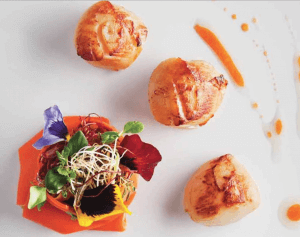 Alain Ducasse at The Dorchester finds itself on the list not because, per head, it is the most extravagant restaurant in town. Not by coincidence, it happens to be the most lavish, with an unmitigated attention to detail, from the 4,500 glimmering fibre optics as part of the décor, to the scrupulousness put into every element of every dish. It would be remiss not to point out that Alain Ducasse is one of the biggest names in gastronomy and he concurs with Robuchon, that London is the culinary capital of the world. In fact, he believes the Michelin guide ought to be acknowledging this in their ratings of restaurants in the capital.

Despite what the menu might tell you, Heston has many a surprise up his sleeve. The food at Dinner is characteristically experimental, from the ‘porridge of frogs’ legs’ to the chicken liver and foie gras that takes the appearance of a clementine. The obscurity of dishes on the menu have not detracted from the restaurant’s accomplishments. Within a year of opening in 2011, Dinner was awarded its first Michelin star, has more recently obtained a second, and has become one of the world’s best new places to dine. 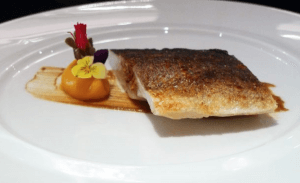 Recently rated by the Good Food Guide as one of the best restaurants in Britain, the double Michelin star Hibiscus serves up fine seasonally changing dishes. All ingredients are sourced within the UK, while the in-season mantra is taken very seriously. In summer, for example, dishes such as Var Salmon, Artichoke Barigoule & Eucalyptus are offered. Head-chef Claude Bosi originally opened the restaurant in Somerset, where it quickly garnered two Michelin stars. Always striving for a new challenge, Claude moved Hibiscus to London, where it continues to be recognised for Bosi’s passion for flavours, simplicity, and elegance.

With quite possibly the most creative and striking dishes available in London, this Michelin star sanctum of haute cuisine in the City of London offers a distinctly glamorous culinary offering. Toulouse-born chef Pascal Aussignac hails from Gascony, in the south-west of France, while he claims his lunch menu takes guests on a gastronomic journey through the region. He isn’t wrong – the menu contains some spectacular options such as ‘foie gras popcorn’ and ‘cappuccino of black lobster’ that are visually stunning. 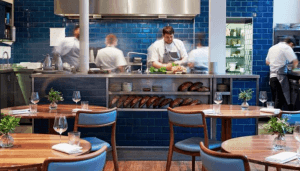 Situated within the repurposed Shoreditch Town Hall, The Clove Club is a blend of dark wood and pale walls, which are perfectly matched to its high ceilings and an open kitchen. The simple décor is cut with beautiful cerulean tile, which results in an altogether inviting atmosphere in which to enjoy their utterly delectable cuisine.

Controlling the kitchen is Isaac McHale, head chef, who serves a menu which is a true masterpiece of contemporary cuisine. With a set nine-course daily- changing menu, you are invited to enjoy a succession of seasonal small plates: championing British produce, and culminating in one of the most pleasurable dining experiences in the city.

San Sebastian’s three Michelin star Arzak restaurant has been listed among the world’s 50 best restaurants for the last 11 years. Its London outpost, Ametsa, provides a luxurious, modernist space to lunch where hundreds of test tubes, filled with the incredible variety of spices used in the restaurant’s cooking, hang from the ceiling.

Cuisine is reflective of the philosophy in San Sebastian – reworking traditional Basque dishes with cutting-edge techniques. The restaurant is hosted in the five-star Halkin by COMO hotel in the heart of Mayfair, so don’t be surprised to share your meal with some of the biggest names in London.

Kitchen Table has just received its first Michelin star, and rightly so, for cuisine as delectable as it is daring. This meal is truly something special. Chef-owner James Knappett prepares a menu of around 12 dishes. The produce is exemplary; the cooking has a clever creative edge, and the dishes have real depth. Each of the courses on the tasting menu delivers eyebrow-raising flavour, set to astound and delight even the most discerning diner. Dining at Kitchen Table is an experience your palate will not soon forget.

This restaurant is a behemoth of the London dining scene. Offering unapologetically old-school fine dining since opening in Chelsea in 1967, it has since become a staple of London’s haute cuisine. First opened by the Roux brothers, Albert and Michel, it’s now run by Michel Roux Jr who took the reins in 1991. The classical, rich and indulgent French cuisine is the main draw at Michel Roux Jr’s renowned London institution, and long may it continue to reign supreme. 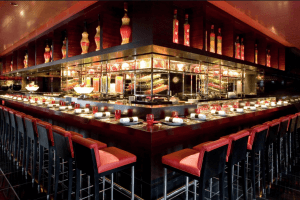 Joël Robuchon. Named “Chef of the Century” by the prestigious Gault Millau guide and holding 28 Michelin stars worldwide – more than anybody else – he may well be the world’s most prominent chef. Indeed, two of his closest rivals, Alain Ducasse and Gordon Ramsey, were also trained by the great man. Ramsey, as you might expect, was a stroppy apprentice and Robuchon admits he once aimed a plate in the Scot’s direction.

There are a host of L’Atelier de Joël Robuchon restaurants worldwide, taking on a new concept of fine dining. The London outpost is among the finest, Robuchon himself labelling the city as the contemporary world centre of cuisine.

The red and black lacquered room sets the scene, which the vibrant food complements. A unique counter concept takes centre stage downstairs, where interaction with the kitchen team is encouraged in this theatre for the senses (perhaps aptly located in London’s West End). They prepare mouthwatering dishes, such as ‘soft boiled egg on a black truffle coulis and young Comté cream’ and ‘free range quail stuffed with foie gras and mashed potatoes’ that are packed with bold flavours. 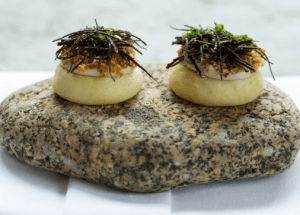 Tucked away in a corner of Notting Hill, The Ledbury may well be discreet, but is also undoubtedly magnificent. Despite being awarded two-Michelin stars and breaking into the San Pellegrino’s top 10 restaurants in the World, the Ledbury still maintains an impressive local identity. Regulars enjoy the venue’s bright, uncomplicated, but opulent dining room.

The Hakkasan brand has become something of a fine dining empire, with 12 branches sprouting all around the world. Some may call it ostentation incarnate, but when the food is as ornate as the multi-million pound surroundings, you know you’re in a restaurant as fashionable as they get. This Chinese establishment is also one of the few to receive a Michelin star, widely being recognised as the place to go for modern oriental cuisine.