Blog » Travel & Getaways » UK » London » 5 Famous Buildings of London’s Skyline – Which One is the Tallest? 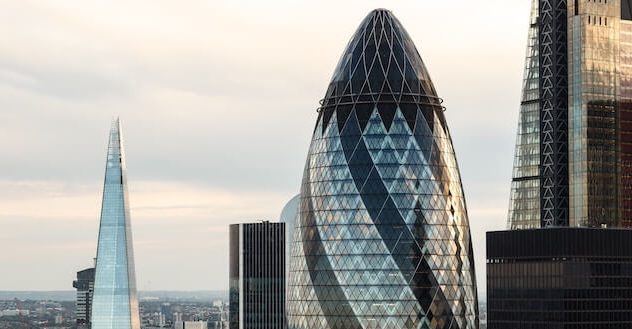 London’s skyline is one of the most recognizable in the world. It’s the backdrop for countless movies, royal weddings and iconic moments of history. One of the exciting things about it is that it’s both iconic and in a state of change, with plans for new buildings constantly in the pipeline.

People pay a good penny to reach the highest points in the city for an overarching view of the Capital, so we set out to find which building in London offers the first prize view.

What is the tallest building in London?

Since 2019, there have been nine new buildings over the height of 150 metres built in London and it seems that the number is set to keep growing! With so many high rises popping up, you might be asking yourself what is the tallest building in London. Well, if you’d asked that question in 1710, the answer would have been St Paul’s Cathedral. Standing at an impressive 111 metres, St Paul’s was the tallest for over 250 years. Then in 1963, the Millbank Tower was built and took the title by only 7 extra meters. The Millbank Tower’s reign was short-lived though, because a year later the BT Tower, spanning a whopping 177 metres was built and took the crown.

The early 2000s saw a boom in skyscrapers in London’s city centre, and the title didn’t stay in one place much during that time. That is, not until 2012 when the reigning king of the London skyline was complete. Standing at 309m, The Shard is still the tallest building in London by a long shot and there seem to be no plans to debunk it of its title. It’s one of the defining features of the London skyline silhouette at night and can be seen from many different locations across the city.

While The Shard may be the tallest, it has some competition for the most striking building in London. Here we take a look at each existing building, the potential new buildings on the horizon (no pun intended) and learn a bit more about the view we so often take for granted. Oh, and did we mention that we arranged them in height order? You’re welcome. 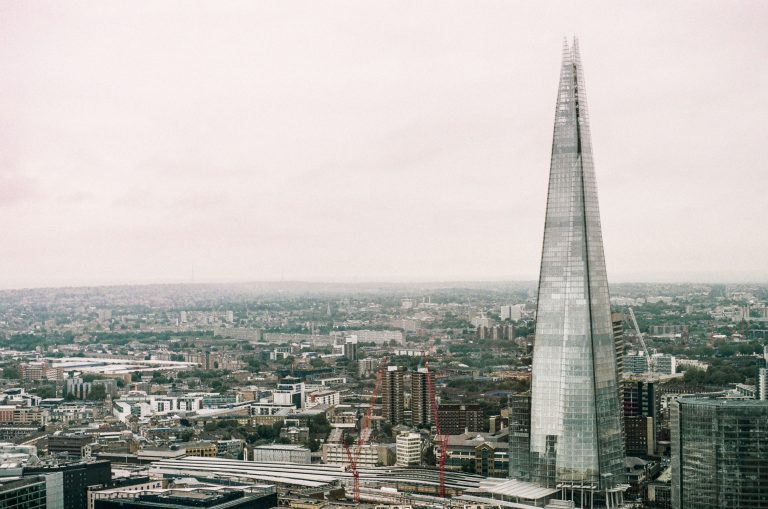 No discussion of London’s skyline is complete without a mention of the 95-storey skyscraper “The Shard of Glass.” The unique building designed by Italian architect Renzo Piano forms part of the Shard Quarter development in Southwark. Covered entirely in glass, the 309.6m high pyramidal structure is currently the tallest building in London, the UK and the European Union.

With that kind of height, it’s inevitable that you’ll get breathtaking vistas from this institutional building. Opening to the public in 2013, the tower has a privately operated observation deck, The View from The Shard. It’s also home to a number of Shard restaurants and bars where guests can enjoy sensational dining with the unforgettable backdrop of London’s skyline. Whether it’s afternoon tea or a romantic dinner for two, The Shard has become the ultimate destination for dining at dizzying heights.

Shop Restaurant Vouchers for The Shard

The Gherkin and now the Cheesegrater? Are we talking about London’s skyline or are we making a salad? Officially named 122 Leadenhall Street, the building stands 225 metres tall, making it one of the tallest skyscrapers in the Square Mile. The tapered design of the building was done to preserve views of St Paul’s Cathedral giving it the appearance of yup, you guessed it, a cheesegrater.

Officially called 30 St Mary Axe, this iconic structure is more popularly known as The Gherkin, and it’s not difficult to see why. The distinctive cigar shape makes it easily recognisable in the London skyline, towering 180m in the heart of the city’s primary financial district.

The glass-fronted steel structure was designed by legendary British architect Sir Norman Foster. Taking two years to complete, it officially opened in April 2004 and in 2005, The Gherkin was voted the most admired new building on the London skyline. As a private office building, it isn’t open to the public except for its restaurant and bar, and special events such as Open House London. 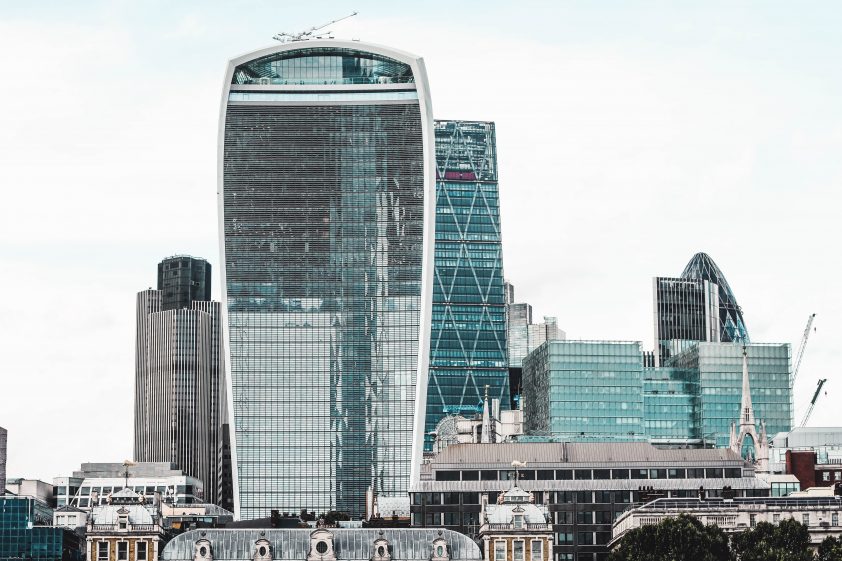 Another one of the City of London’s most recognisable pieces of architecture, 20 Fenchurch Street got its nickname ‘Walkie Talkie’ due to its distinctive top-heavy shape. Rafael Viñoly’s London skyscraper sits in the historic City of London financial district, standing 38-stories high. Today it is the fifth tallest completed building in the City of London.

34 of those floors are dedicated to office space, while the 35th, 36th and 37th floors are for visitors to enjoy bars, restaurants and a large viewing deck. A must-do for anyone looking for fun things to do in London is a visit to the Sky Garden. Spanning three stories, the landscaped gardens and open-air terrace offer 360-degree views of London’s skyline.

Ever since its proposal, the high-rise has been a contentious issue. It’s been blamed for powerful downdraught on the streets of London, its concave design channelling gusts of wind strong enough to knock people over. It’s also been responsible for a glaring beam of light so hot it melted the paintwork off cars, being rebranded by critics as the ‘Walkie Scorchie.’ 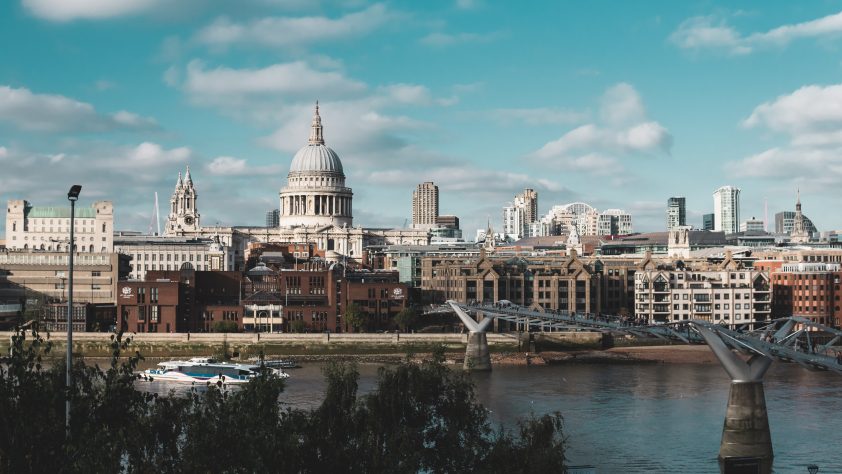 When talking about the London skyline, it’s easy to fall into the trap of discussing skyscrapers that have been built in the past two decades. But one historic building has been defining London’s skyline for over 300 years – St. Paul’s Cathedral.

Completed in 1708, the Anglican cathedral is a world-renowned structure with a vast dome reaching a height of 111 meters. It sits within the central City of London, atop Ludgate Hill and northeast of Blackfriars. After enduring the Great Fire of 1666, it was rebuilt by Christopher Wren who combined Neoclassical, Gothic, and Baroque elements.

The cathedral has been the site of many historic state occasions, including the Royal Wedding of Prince Charles and Lady Diana and Sir Winston Churchill’s state funeral. It’s also the resting place of several famous people; the Duke of Wellington, Admiral Nelson and Christopher Wren himself are entombed in the cathedral’s crypt. It’s pretty cool to have so much history right there in the middle of the city.

Buildings on the Horizon

These buildings haven’t been built yet, but when they have, they’re sure to make quite a dent to the London skyline.

A new plan for a 53-storey skyscraper in Blackfriars promises ‘affordable’ housing and a new public square. Whether that’s a reality or not, one thing we’re sure of is that it’ll fit right in with the strange assortment of skyscrapers on the London skyline. If you’ve ever looked at the weird collection of London buildings and thought, what we’re missing is a board game, then you’d be right on the nose! This new building is designed to look like a game of Jenga, and personally, we can’t wait to see how it all pans out.

Bordering Blackfriars Road and Stamford Street, the development sold for a whopping £235 million at the end of 2019. It’s to include 288 homes, a 548-room hotel, a music venue, shops and offices. Suggested nicknames for the massive blocked tower include the Jenga Tower or the Minecraft building. But maybe you can think of something better.

The construction for this new addition to London’s most popular area is already underway and it’s already making waves for its innovative design. Planned to span 50-stories, what’s great about this new kid on the block is its sustainable design features. Built into the plans are advanced rainwater storage and harvesting systems, which will no doubt be the talk of the town once it’s complete.

A new neighbour to The Cheesegrater, the opening date of 100 Leadenhall Street is only set to be in 2026, with COVID-19 already putting a delay on the process. If this building makes its way to completion, it’ll house both retail and office space. It’ll also offer pedestrian routes linking Leadenhall Street to St Mary Axe and Bury Street, which will be an added bonus for commuters.

This new office block, The Undershaft, is set to overtake The Cheesegrater for the spot of the tallest building on the Square Mile. The plans for this new 74-floor building were approved in 2019 and construction is set to start in the next few months.

Haven’t heard of the Tulip? I don’t blame you. It hasn’t even been built yet. In fact, it likely never will.

The 1 000 ft skyscraper, called “a lift shaft with a bulge on top” by Historic England, would have been the second tallest in western Europe. The Tulip was designed by famed British architect Norman Foster. Considered as one of the most prolific British architects of his generation, Foster has already had his fair share of editing the London skyline; he’s responsible for designing City Hall, Willis Building and 30 St Mary aka the Gherkin.

London’s mayor, Sadiq Khan, rejected plans for the glass building in July 2019, arguing that “the design is of insufficient quality for such a prominent location.”

As a leading financial centre with a growing population, London’s skyline is always susceptible to change. Last year the number of skyscrapers in the capital hit an all-time high of 541. This year, a record 76 skyscrapers were to be finished, more high-rise buildings than any other year.

If developments continue at this rate, what will the city’s skyline look like five years from now? Only time will tell.