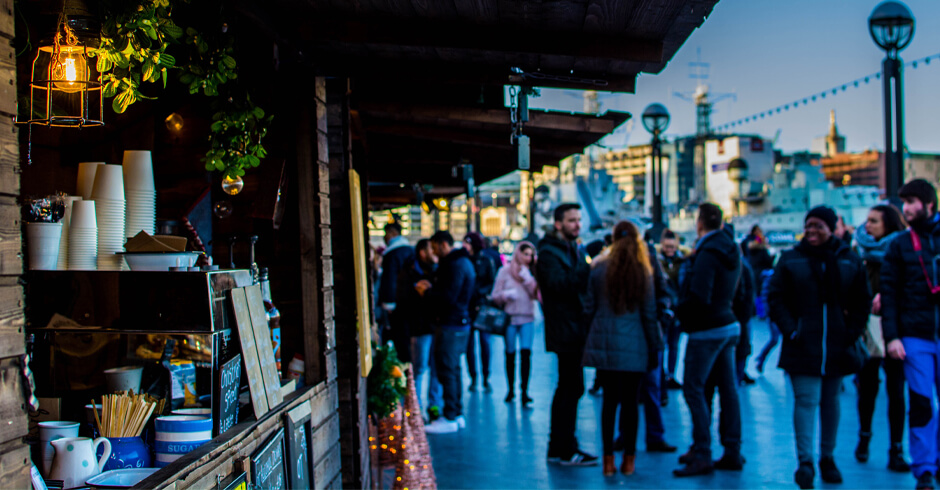 TRULY’s tastemakers have done the rounds, and we can confirm that this year’s plethora of Christmas markets and fairs around the capital are as good as any other. Just be aware there are one or two best avoided.

It’s worth noting that, while there are upwards of 40 markets taking place around London, only a handful of those are ongoing. The most charming and esoteric ones take place in an evening or over a weekend in your local neighbourhood, so we suggest looking out for those. For the time being, we’ve chosen to pick out our favourites as well as an auspicious-looking up and comer. Whether it’s mulled wine, bratwurst, roasted chestnuts, winter woollies or scented candles you’re after, these markets have them in abundance.

11th Nov – 4th Jan
Tube: Waterloo/Embankment
Traditional timber shacks (that’s the technical term) are currently lining the Thames outside the Southbank Centre under some spectacular festive lights. The warm cider and mulled wine on tap might not be the most reasonably priced drink you’ve ever had, but one can find certain chocolate treats for as little as £1. Questionable stocking fillers (such as wooden neck ties) are present, but so are a few more attractive gift ideas. 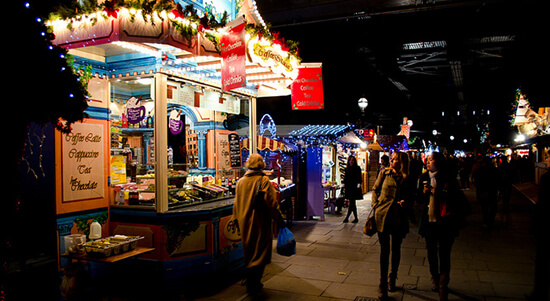 8th – 21st December
Tube: London Bridge
Further downriver, and under the shadow of Tower Bridge, lies the More London Christmas Market, where you’ll find a bit of everything food or gift related. The businesses setting up in the 36 Alpine-style chalets will have more of an emphasis on foodies – think traditional bratwurst, Nutella crepes, and a spit roast. Choirs and brass bands will also add something to the atmosphere, if you’re into that sort of thing.

21st Nov – 4th Jan
Tube: Hyde Park Corner
Hyde Park’s Winter Wonderland returns again, and it seems to better itself each year. A formidable ice rink (the biggest, so it claims, in the UK) is the highlight this time around, which surrounds a Victorian bandstand. If you’ve just come for a bit of grub and something to drink then you might be surprised to hear entry is free. Beer is served in two-pint German steins while the hog roast dishes out reasonably hearty portions. There’s a premium on entry to the cocktail bar, but that’s easy to forgive when you realise a lot of it is made out of ice. 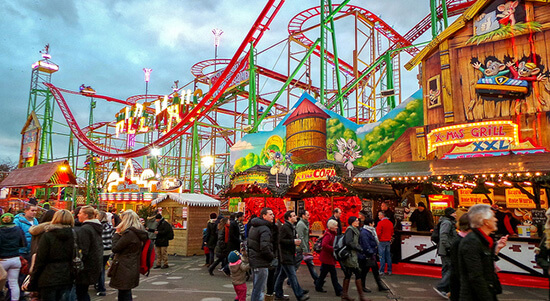 12th – 14th December
Tube: Angel
The Chocolate Festival is a good place to either a) stock up on gifts for chocolate lovers, or b) overindulge yourself in true Christmas fashion. Tastings, chocolate-making seminars, cocoa spas, and hot chocolate cafes are all under one roof which is, as you’d think, a paradise for chocoholics. Highlights include ‘Choctails’ – Belgian truffles based on traditional cocktail recipes, and marshmallow bars – similar in appearance to a Mars bar, but containing a fluffy layer of marshmallow.

2nd Dec – 1st January
Tube: Mile End
If a Christmas market and a winter festival had a child, this would be it. With a promising lineup to its inaugural year, Winterville inhabits Victoria for the duration of a month. Attractions are plentiful and include ice skating, horse-drawn carriages, obligatory street food and even, would you believe it, a Wall of Death. A craft beer tent will be rounding up a selection of microbreweries from around the capital, while Smoke Stack will provide some of the best brisket you’ve ever put in your mouth.