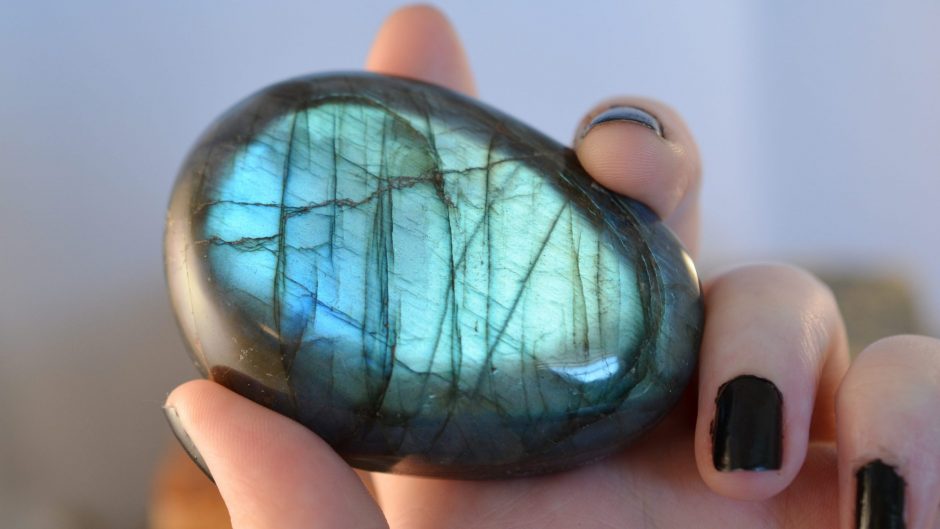 Like many gemstones, labradorite is a mineral – a feldspar mineral, to be exact. It’s classified as an intermediate to calcic member of the plagioclase series of minerals.

As with all plagioclase members of the mineral family, labradorite has a triclinic crustal system. Labradorite stones can appear to be clear, white or grey in colour, and come in all shapes and sizes.

If this all sounds a bit complicated and scientific, read on! We’re here to tell you more about labradorite crystal.

Labradorite stones have a labradorescence about them, which is exactly where they get their name from. This means that these kinds of crystals are often found in thin, tubular shapes. While the most commonly found colours of these stones are white and grey, labradorite stones in blue, green, yellow and brown hues have been found too.

These crystals have a pearly sheen, with some specimens of them exhibiting a schiller effect. This means that they boast a lustrous mix of colours as a result of the stone’s interaction with light.

The effect takes its name from the German word schiller, meaning twinkle or shining. It describes the gemological effect of aventurescence, which occurs when light bounces off of tiny mineral platelets found inside the stone.

Where Is Labradorite Found? 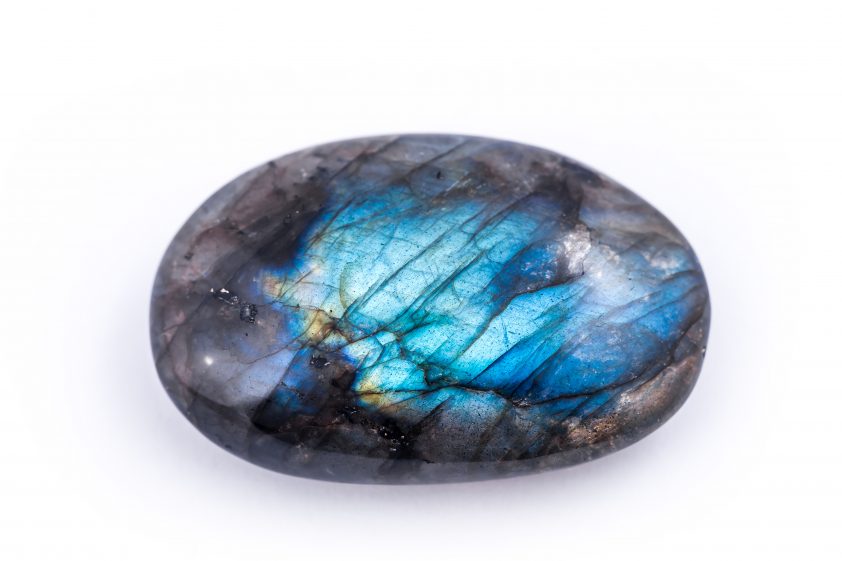 Labradorite was first discovered on Paul’s Island. This island is in Labrador, northeast of Canada. Labradorite crystals have been known to the native Inuit community for thousands of years already.

More recently, in the late 18th Century, Moravian missionaries discovered it. The stones generally come in beautiful shades of grey-green, dark grey, black or white and have streaks ranging from peacock blue to copper and light green in colour.

Over the past few decades, labradorite stone has been found in Newfoundland, Russia, the Ukraine, Madagascar and Finland. In fact, one of the rarest forms of the mineral was discovered in Finland during the 1940s. They were champagne gold in colour and very few have been discovered since.

What Is The Meaning Of Labradorite?

Labradorite crystal is also known as “the stone of mysticism”. It’s linked to the incredible natural phenomenon known as the Aurora Borealis, or the Northern Lights. Labradorite stones are as mystical as its iridescent, changing colours suggest.

The meaning of labradorite has quite a long and eventful history. It has rich, shamanic vibes due to its connection to the Inuit community. Legend has it, that once upon a time, an Inuit warrior saw that the Northern Lights had become trapped in a piece of the stone. It’s believed that he took his spear and struck the rock to help set the light free and back up into the sky.

In the 18th Century, Moravian missionaries were so enthralled by this remote part of the Canadian wilderness that they continued to travel there, sharing the stories with those back in Europe. As a result, the stone now represents a sense of mysticism and folklore.

In Finland, labradorite crystal is called Spectrolite as it seems to have captured every shade in the whole spectrum of colour. The stone has since been synonymous with the ideas of art and magic and is representative of those who long to embrace and explore the mysteries of the universe.

What Are The Healing Properties Of Labradorite? 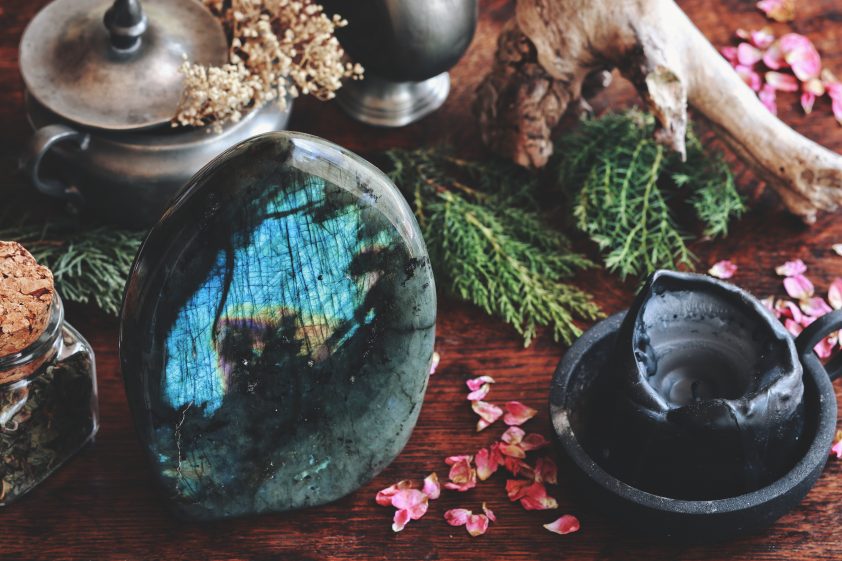 Labradorite’s healing properties are all focused on tapping into your well of creativity, connection and higher consciousness. The bounty of colours that shimmer on the surface is a reminder that the greatest healing stones are often the ones connected with all the elements. The earth beneath our feet, the surging water of the ocean, the expansive sky and the stars twinkling above us.

Labradorite helps us heal against the negativity we have within ourselves. Because of its changing colours, it’s linked to transformation, which stimulates the throat chakra. This helps us heal from any illnesses associated with sore throats, such as tonsilitis.

What Is The Labradorite Stone Used For?

Due to its deep roots in magic, labradorite is used specifically for setting and manifesting intentions. It’s one of the most powerful stones for crystal healers, as it puts us in touch with our own inner powers. Labradorite crystals help their bearers tap into their own limitless potential, allowing them to manifest without boundaries.

While labradorite stones are not commonly thought of as one of the best crystals for inducing sleep, they are said to be able to help one fall into a deep sleep and tap into their dream state. For sleep to be rejuvenating, one needs to sleep soundly and without interruption. By guiding its bearer to their dream state, labradorite crystals help facilitate peaceful, restful and deep sleep.

How Much Is Labradorite Worth? 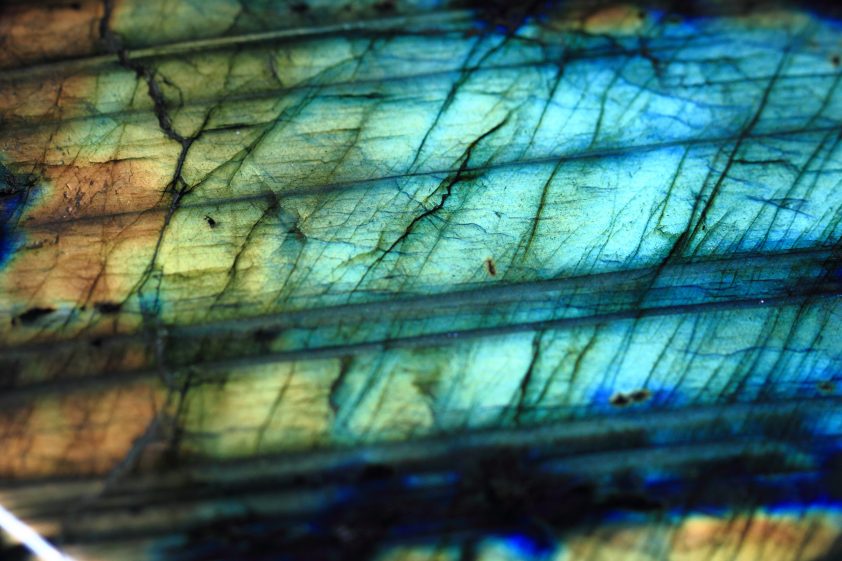 Every gemstone’s price is based on a number of factors, and labradorite is no different. The lower the quality of the stone, the cheaper it will be. In the case of labradorite crystals, pricing is determined by any inclusions or visible veins similar to cracks.

Are Labradorite And Moonstone The Same?

While they may look similar, labradorite stones and moonstones are not the same. They are, however, referred to as ‘sister stones’. They are both members of the feldspar mineral family, but labradorite is classified as a plagioclase feldspar, while moonstone is an orthoclase felspar.

Labradorite’s healing properties, it’s gorgeous colours and its rich background make it a highly desirable stone. Whether wearing it in jewellery or displaying it in crystal form, it’s sure to make a statement!

Learn about other beautiful coloured gemstones in our list of Blue Gemstones and Green Gemstones.