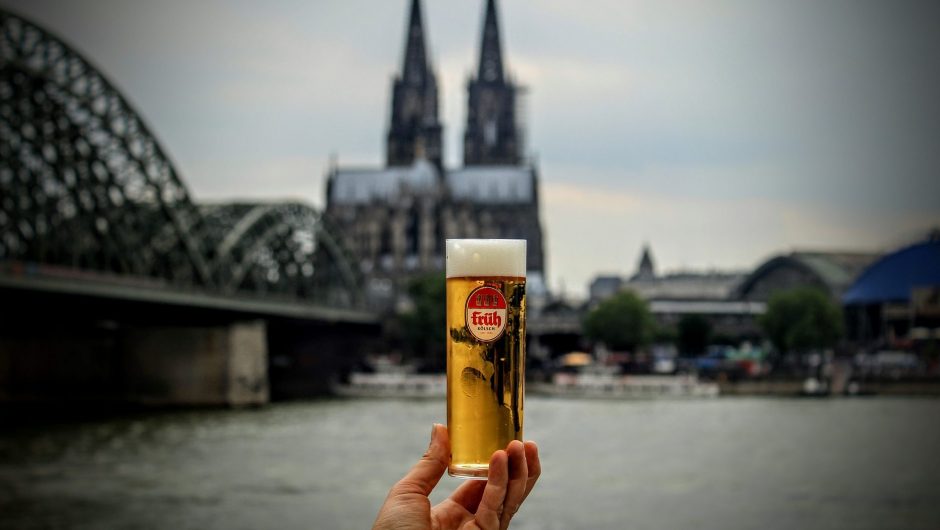 While Kolsch has become popular as a light and refreshing beer enjoyed around the world, and particularly in the US, it also has a long and fascinating tradition and history in Cologne, Germany. For centuries it has been lovingly brewed and guzzled down by the gallons, kept alive by its endless popularity and rich traditions, and also by Germany’s world-famous beer-making standards. 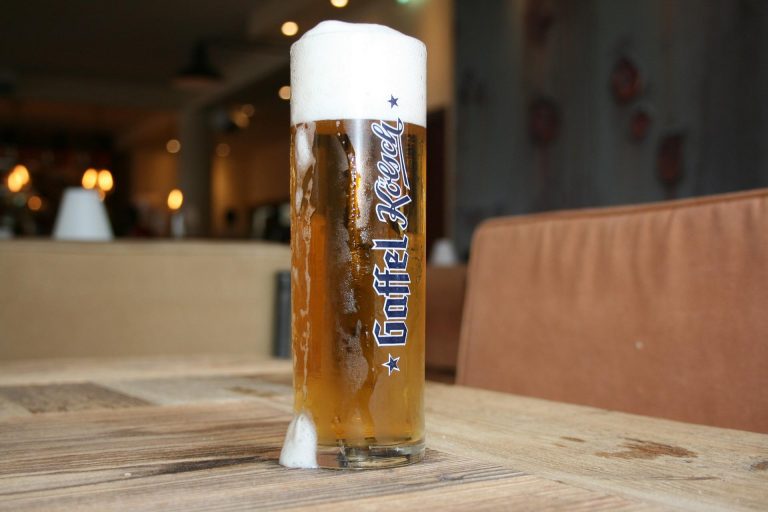 Kölsch, marketed internationally as “Kolsch”, is a style of German beer that originated in Cologne, Germany, between the early 17th century and late 18th century.

Kölsch has a light and clear appearance, with a golden yellow hue. It should not be confused with Hefeweizen weissbier though, which is a very different pale German wheat beer that comes from Bavaria.

In the decades leading up to 1750, brewers in Cologne were finding themselves in a losing battle against the more popular bottom-fermented beer brewers in Germany. So, in response, they developed a successful hybridized method. This allowed them to maintain their style of top-fermented brewing while also matching the success of their competitors. The product of this method later came to be known as Kölsch and has remained a well-loved staple beer in Germany ever since.

Kölsch was first given its name in 1918, after the city of Cologne, “Köln” in an old German dialect, and to officially commemorate the renowned Sünner brewery for keeping the style alive since 1906.

In 1997, the Kölsch style became protected in Germany and the EU, as a PGI, protected geographical indication. Much like French champagne, a “true Kölsch” must be made within a 50 km radius of the city of Cologne, as prescribed by the Kölsch Konvention, and the members of the Kölner Brauerei-Verband.

Is Kolsch An Ale Or A Lager?

Kolsch is essentially a type of German pale ale that is cold conditioned like a lager. Cold conditioning is a cooling process that clears the beer and stops the fermentation process, helping it mature over a period of a few weeks. A similar process is used to create Düsseldorf’s altbier.

What Is The Difference Between A Kolsch And A Pilsner?

Lagers also undergo the “lagering” cooling process from which they are named. While Kolsch has a similar lagering process, it is, however, the fermenting process that distinctly sets it apart as an ale.
Also, unlike pilsner and other lagers, Kolsch has yeast esters that give it a lighter, more fruity taste.

Is Kolsch A Wheat Beer?

In Germany, Kolsch is brewed in strict accordance with the Reinheitsgebot. This is a 500-year-old set of German beer-making standards that state that only barley, hops, yeast, and water, should be used to make beer. Though many fine beers have since been made counter to the Reinheitsgebot, including in Germany, Kolsch beer, however, is traditionally still made in accordance with it.

In the US, however, and in other parts of the world, various breweries not held under the standards of the Reinheitsgebot have been using wheat and other non-traditional ingredients to make their own variants of Kolsch beer.

How Are Kolsch Beers Made?

Kolsch beer has a very distinct definition in Germany, in terms of how it should look and how it’s made. According to the Kölsch Konvention, it is a clear, pale, hoppy beer, golden-yellow in colour, that is brewed using top-fermenting yeast, and in accordance with the Reinheitsgebot.

It employs a hybridized process of first top-fermenting like an ale, and then cooling and ageing the beer in a process similar to lager and other bottom-fermented beer.

Though Kolsch is technically an ale, it can be reminiscent in taste to a pilsner, though less bitter and with a slightly lower alcohol content. It is generally enjoyed for its own unique and refreshing light hoppy taste, though, with a slight malty aroma and aftertaste, and delicate notes of fruit and brisk.

Also see  What is Kellerbier? The Germanic Tradition Of Brewing Lagers In Caves

Are Kolsch Beers Bitter Or Fruity?

Carefully chosen hops used in Kolsch beer provide it with a fairly low level of bitterness compared to other beers. Fruity notes of pear or grape add to its refreshing lightness.

What Is Cherry Kolsch?

Cherry Kolsch is a popular new variant made elsewhere in the world, such as in the US. It combines the bright, refreshing Kolsch taste with an added blend of cherry. The higher level of sugar also provides a greater carbonation level, giving the drink the refreshing fizzy quality of cherry cola.

How To Best Serve Kolsch Beer? & In What Kind Of Glass? 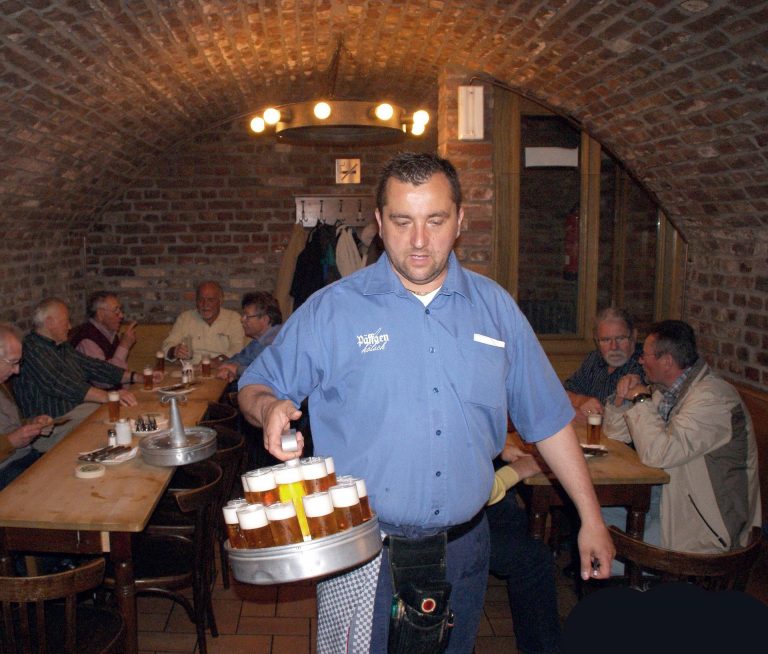 In its birthplace of Cologne, Kolsch is traditionally served in a glass that is distinctly tall and thin, called a “Stange”, otherwise known outside of Germany as a “pole” or “rod”. Stange glasses, or Stangen, are generally made to hold around 180 to 200 millilitres.

Stange glasses are designed to show off the colour of the beer as its being served, as well as hold the aroma of the beer for longer than an average glass. Furthermore, if the beer-drinker so chooses, it also makes the process of gulping down a delicious beer that much easier.

Kolsch is best served freshly-poured, and at a temperature of around 3.3 – 7.2 degrees Celsius. It should be drunk fairly promptly before it has time to become warm and stale in the open air.

What Are The 5 Best Kolsch Beers To Try Right Now?

For an authentic Kolsch experience, the German brews are naturally the best. However, in places where the German varieties are limited, or perhaps too expensive, many American variants of Kolsch have come into their own over the years as tasty alternatives.

The Reissdorf Kölsch is well-known as a gold standard of German Kolsch beer. With a clean malt, a bright, hoppy taste, and a fluffy white head, Reissdorf is one of the most flavourful traditional Kolsches to be found anywhere.

Päffgen Kölsch is another example of a magnificent, top quality, German Kolsch beer. Usually taken straight from the keg, it has a particularly soft, delicate, and subtly fruity flavour, topped by a light malty body and a creamy head.

The Gaffel Becker & Co. brewery in Germany has been around since 1908, supplying beer-drinkers with their crisp, clear, golden-yellow ale. Like other Kolsch beers, their Gaffel Kölsch has a distinct lager-like quality, though with moderate bitterness, subtle yeast esters and fruity tones.

Of the many US-based breweries in existence today, Suarez Family Brewery has made a name for itself, especially when it comes to their lagers, though also for their particularly delicious Kolsch. Their Kolsch beer, called Fine Line, has the trademark combination of light, smooth ale, with a crispy lager-like edge. Aside from its unique bread-like sweetness, it is a fitting homage to the traditional Kolsch style.

Trillium Brewing Company out of New England, USA, is renowned for its refreshing, American hop flavours. Their tasty pale ale, Sprang, is fermented with traditional Kolsch yeast, and the finest Nelson Sauvin hops, to create a clean, light Kolsch beer containing an explosion of aroma and flavour.

What Is The Most Popular Kolsch Beer Brand In The World?

Reissdorf Kölsch, created by the prestigious Brauerei Heinrich Reissdorf, is well-known to be the largest Kolsch brewery in Cologne, and the most famous exporter of Kolsch beer around the world.
Their Reissdorf Kölsch beer is largely considered to be a text-book-perfect example of the Reissdorf Kolsch style, finding the ideal harmony of malt, hops, and fruity yeast.

What Foods Can You Pair With Kolsch Beer?

The light and widely-agreeable taste of Kolsch Beer makes it suitable to pair with a number of different foods. Because of its light taste though, the challenge is to pick foods that won’t over-power it. Kolsch Beer can go well with many kinds of cheese, particularly certain German meats and dishes such as bratwurst and sauerkraut.

Get Comfortable With A Kolsch

Kolsch Beer is a great choice for both casual drinkers as well as dedicated beer connoisseurs. It also has all the quality in taste and attention to detail that one would expect coming out of a passionate beer-drinking nation such as Germany.

Whether you’re having a quick lunch, sitting at your favourite pub, or having fun at a party, Kolsch beer is highly compatible with a wide range of palates and settings. It is no wonder that it has become a popular refreshment around the world, and if you haven’t tried it yet, it is highly recommended.