Blog » Wine, Beer & Spirits » Beer » Ale » What is IPA Beer? The Best IPA Beers Around the World to Try 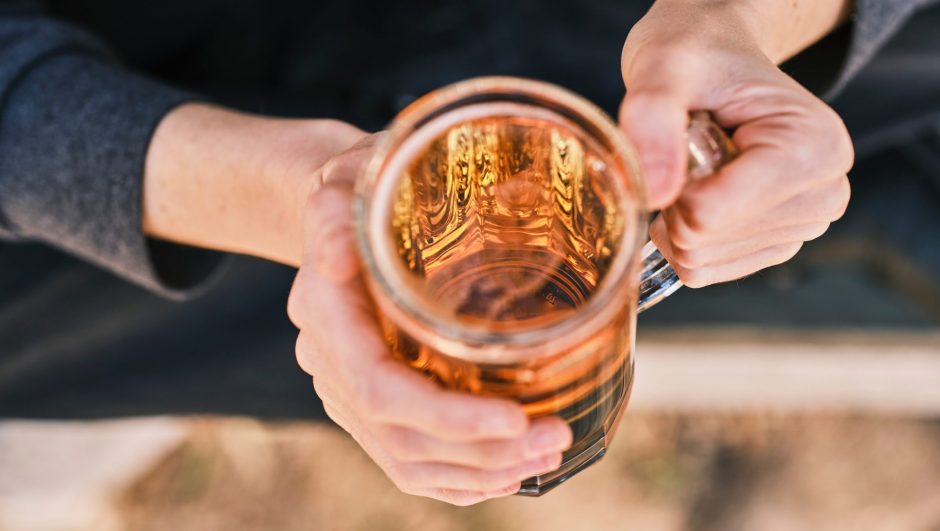 If you’ve spent your whole life drinking commercially produced beer, there’s no time like the present to tantalize your tastebuds with the ambrosial sensation that is craft beer. Craft beer, of which IPA beer is an example, is different from commercial beer in taste and look.

While commercial beers are similar in colour, craft beers come in a wide array of hues from copper to gold to dark brown and black. In the craft beer business, flavour is given top billing. A sip will delight your tastebuds with hints of floral hops and fruitiness, rich coffee, chocolate and caramel. The varieties are unlimited, and IPA is one of the favourites.

What is IPA Beer? 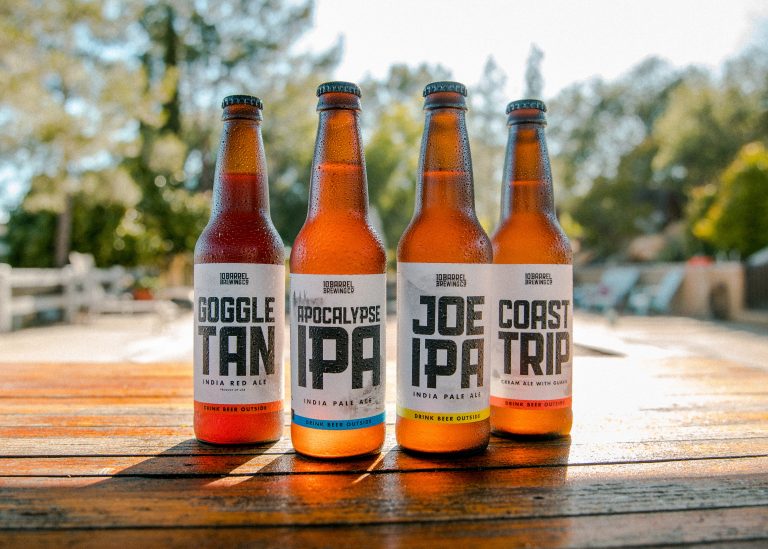 India pale ale is a hoppy beer that was widespread in England in the early 1800s and which has enjoyed a surge in popularity over the past few years. Pale ale is one of the most popular types of craft beer and the word ‘pale’ is a reference to its coppery-gold, light hue.

The taste is citrusy from the added hops. Hops come from the Humulus lupulus plant which contains tiny yellow pods – the source of bitterness, aroma and flavour in IPA. India pale ale has a higher alcohol content than other types of craft beer and it has a bitter, spicy, earthy taste.

What is the History of IPA Beer?

While India played an important role in the creation of IPAs, it was not invented there. IPA beer was invented by the British because brewers needed to keep beer fresher for longer on their voyages to India so they added hops to preserve the beer for a longer period. During trips to India, the beer kept spoiling because of extreme temperatures and a lack of refrigeration.

As legend has it, in 1751, George Hodgson of East London’s Bow Brewery created the first IPA beer using hops and alcohol – both of which are preservatives. Although the drink was extremely bitter and highly alcoholic, it survived the voyage from England to India. Thereafter, when more breweries sprung up and refrigeration was invented, the issues that had previously challenged beer makers no longer existed. Hodgson’s IPA beer was exported to India and became popular among East India Company traders and by the 1860s, India pale ale was widely brewed in England.

What Are the Different Types of IPA Beer?

British IPA is the original beer style from which all others arise and initially, British hops such as fuggles and goldings were used which imparted a grassy, earthy and somewhat citrusy character. The beer is bitter because of the storage process and it is usually about 6-7% and dry as a bone. Two excellent examples are Siren Soundwave and Beak Parade.

NEIPA (New England IPA) is a trendy beer with a fruity, juicy flavour and less bitterness because the hops are added later. It began with an IPA beer called the Heady Topper when brewer, John Kimmich, decided not to filter or pasteurise the beer resulting in a thicker IPA with added flavour and aroma. It was unusually murky and was given the nickname, the hazy IPA. A limited supply of Heady Topper led to other brewers making their own hazy IPAs, and culminating in what is referred to as the ‘haze craze’.

Hops are only added late in the boil – one hour before completion of the boiling process which intensifies the aroma and extracts fewer acids in the hops which provide a beer’s bitterness. The flavour is hop-intense and fruity with notes of passionfruit, papaya, pineapple, guava and mango. Examples of NEIPA include 3 Ravens Juicy, Hop Nation Jedi Juice and Sauce Bubble & Squeak.

The West Coast IPA first appeared in the 80s and was the first to include a fruity hop aroma but the beer is not sweet. It perfectly balances bitterness and tropical fruity notes imparting a unique aroma of citrus with pine. This beer is not as dry as the original British IPA because the brewers use crystal malt.
East Coast IPA is based on the west coast IPA style but the difference is in the yeast. In California, brewers use flavourless yeast and focus on the hop aroma but East Coast brewers use complicated British yeast – a yeast that has a unique flavour and smell combination of tropical, stone fruit and banana. This beer is less bitter and has a bit of a cloudy appearance.

Brut IPA was formulated by Kim Sturdavant a brewmaster in San Francisco. He used amyloglucosidase, an enzyme that breaks down complex sugars that might not otherwise ferment, on his triple IPA to make it bone dry with no sugar. A Brut IPA is a bone dry, fizzy, champagne-like and light-bodied beer

How is IPA Beer Made?

The selection of hops when making IPA beer is crucial in determining its flavour. English style IPA use hops such as Willamette, Centennial, Goldings, Northdown and Fuggles.

In the brewing of an IPA drink, hops dominate its flavour. Depending on the style of the IPA, the selection of the hops is highly important to determine its flavour. For example, English style IPA use hops such as Northdown, Fuggles, Goldings, Cascade, Centennial, Willamette and more. When brewing begins, the hops and malts are boiled. A number of finishing hops are added at the start of the boil and the dry hops impart a hoppy aroma. Each addition of hops adds to the varying and rich taste of the beer.

To add colour to the beer, caramel and crystal malts are added. For home-brewed IPA drinks, black and chocolate malts are added and to make the body look enriched, flaked barley carapils and wheat are added in small quantities. The IPA grains are mashed at a lower temperature which is set at about 150⁰ Fahrenheit to enable the breakdown of complex sugars. Yeasts are added and the IPA is stored at a temperature similar to that of traditional ale.

What is the Difference Between IPA and Other Beers?

What is the Difference between IPA Beer and Pale Ale?

IPAs have a fruity flavour with low bitterness, although the British style is maltier and bitter. West Coast IPAs strike a balance between fruity and bitter and they are a good drink to have as an introduction to the world of craft beer. Pale ales are hoppy and have a lower alcohol content than IPAs.

How Does IPA Differ from Other Beers?

IPA has been traditionally brewed with English malt, hops and yeast. The American version has a slightly more noticeable malt flavour and uses American ingredients. Beer is made up of a combination of water, grain, yeast, and hops and the type of yeast distinguishes one type of beer from another.

IPAs get their taste from hops and herbal, fruity or citrus flavours. They can be bitter and contain high levels of alcohol and the final product depends on what type of hops was used. While some taste like pure citrus, others are bitter and strong. New England IPAs are characterized by a fruity flavour with low bitterness while British IPAs are maltier and bitter. West Coast IPAs seem to straddle these two options with a balance between bitterness and fruitiness.

IPAs usually contain 5.5% to 7.5% of alcohol. The average beer has an ABV of approximately 5%.
Double IPA is a normal IPA but it contains more hops so has a higher ABV of about 7.5%
Imperial IPA or Triple IPA usually has an ABV of about 10% or higher.

What Kind of Glass Should IPA Beer be Served In? 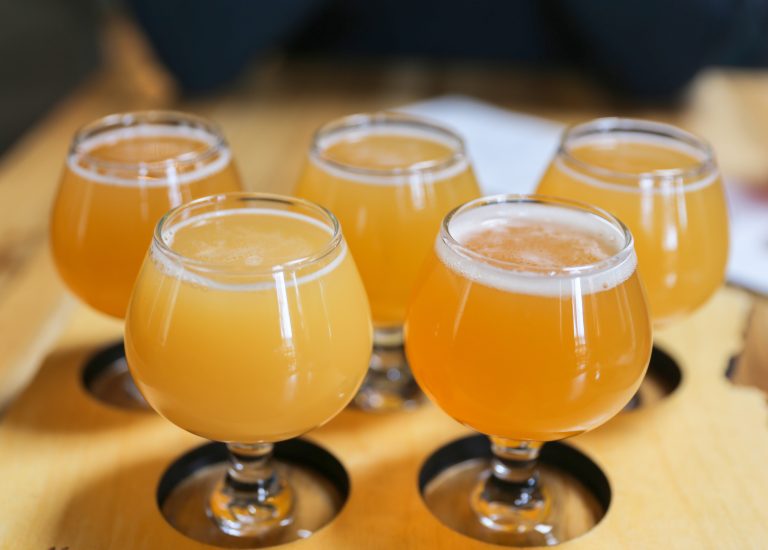 Any glass with a spherical shape that tapers inward at the top will enable the drinker to inhale the aromas of the IPA. Some glasses are designed to maintain the head of the beer for longer than others and the longer the foam remains, the better the experience will be for the drinker. Aromatics are important with IPA beers so you will want to retain the head of the beer for longer.

The Spiegelau IPA glass was designed by the brewers and features a wide, hollow stem with an extended bowl that tapers slightly at the rim. This glass was specially designed to create the best-tasting experience for the drinker – it takes elements from existing beer glasses and improves on them to ensure a great experience for drinkers of American IPAs. The length of the bowl helps to push the aromatics directly towards your nose and ridges in the hollow stem help to aerate the beer.

Also see  What Is Pale Ale? A Beer Drinkers Guide To The Light Side

What Are Some of the Best IPAs in the World?

To compile a list of the best IPA beers in the world, 24/7 Tempo reviewed the 2020 World Beer Awards, presented by TheDrinksReport.com, looking at the results by country and selecting superb beers that have won gold medals. Only seven are presented below.

What Foods Can You Pair with IPA Beer?

The bitterness of an IPA can cool things off so you can drink it with spicy dishes such as tacos or curry. An IPA can also be a palate cleanser: the beer’s hoppiness can help to wash away the flavours of something you have just eaten so you can drink it between courses or just before the main course. IPAs go very well indeed with fatty, heavy foods such as deep-fried meat, sausage, pies or French fries because the drink counteracts the salty, oily taste.

The aromatics of Thai food match beautifully with those of an IPA. The lemongrass and coriander will complement the citrus and herbal hops. Oily fish goes well with a strong beer like IPA, so drink it as an accompaniment to salmon or mackerel. Burgers also go down well with IPAs because your palate will be cleansed between bites – just be careful of the toppings you use because blue cheese would clash with an IPA.

Goan curries are typically less hot and heavy than those from other areas in India and if you plan to pair it with IPA, keep the chilli light and add a bit more coconut milk, curry leaves and cumin. The herb coriander is abundant in the delicious cuisine of Mexico and food such as fajitas has just the right type of spice to go well with IPAs. Pale ales also go well with the flavours of galangal, tamarind and lime in Vietnamese food. Try a delicious pho soup with light rice noodles or a crunchy salad with ribbons of carrot and cucumber.

As for desserts – finish off your meal with a lemon tart or orange cake to correspond with the citrus aromas in your IPA.

The Popularity of IPA is On the Up and Up

According to Drizly’s BevAlc Insights IPA Forecast for 2021, the IPA fervour continues to increase because new and interesting IPAs keep popping up and there is a pandemic-fueled trend for exploration and people are seeking out bolder flavours in food and drinks.

In 2020, according to Drizly, IPA accounted for a 19% share of beer sales, making it the second-best seller after seltzer. It seems as though the ‘haze craze’ shows no signs of slowing down, and IPAs have never been more popular.