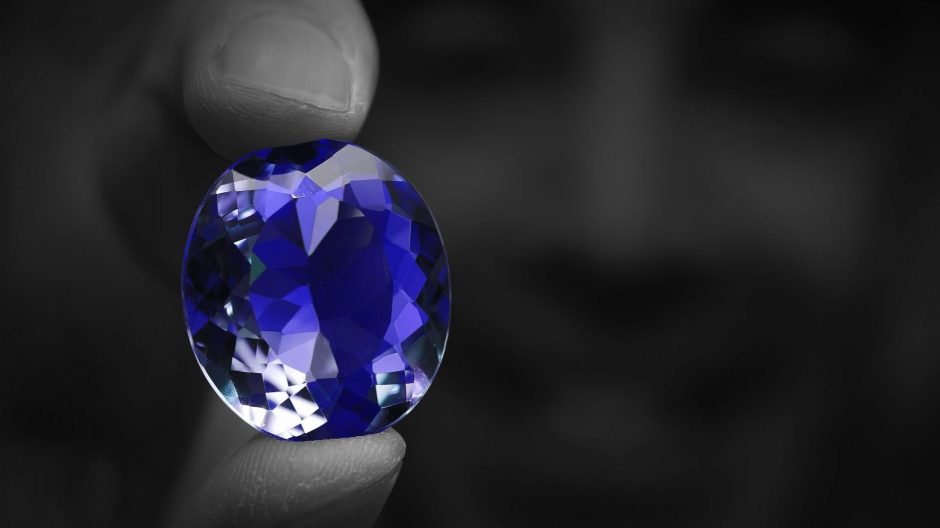 Blue gemstones are often highly sought after as they represent royalty, wisdom and loyalty. Darker blue stones, like sapphire, are generally quite expensive, but gems like iolite make for an excellent, more affordable alternative. Iolite stones also have plenty of spiritual meaning and healing properties attached to them, so they have their own unique value! 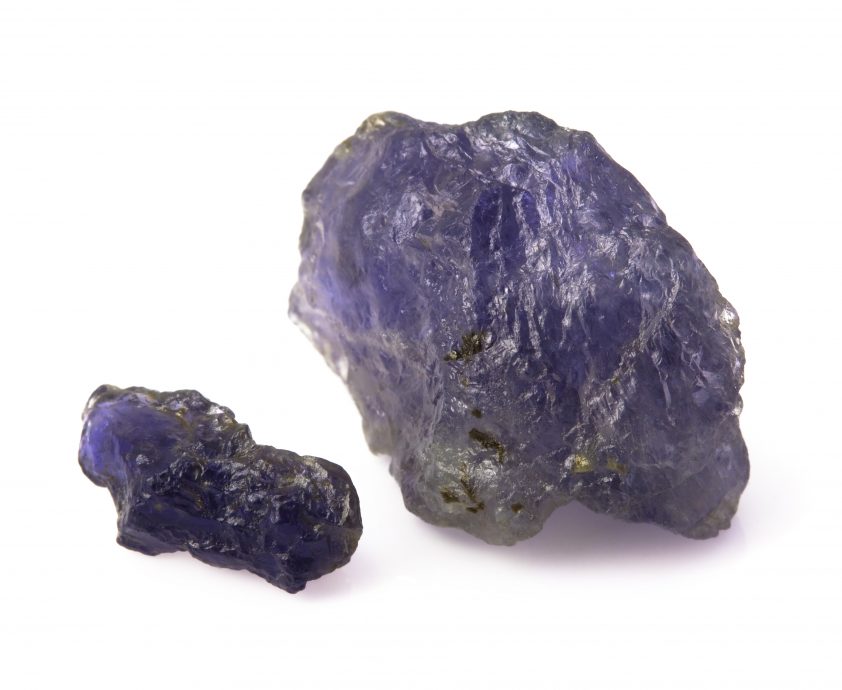 Iolite is the gemstone variety of the mineral cordierite. Iolite crystals are usually transparent to translucent forms of the mineral. Over recent years, iolite has become increasingly popular due to its affordability. It serves as an excellent substitute for more expensive stones.

The colour of the stones can be quite varied, ranging anywhere from very light blue to deeper blue, usually with a beautiful purplish tinge. As with almost every other blue gemstone, the deeper the colour, the more valuable iolite is.

What Colour Is Iolite?

Typically, iolite ranges in colour from light to dark blue, and even violet. However, the stone is also known to occur in different hues including green, brown, yellow and grey.

The most desirable shade of iolite crystal is a very intense violet blue that rivals that of tanzanite. Iolite crystals are trichroic, which means that three different colours are seen in the same gem, depending on the angle you view it from.

Lower quality iolite stones that are poorly cut can often appear very dark, so much so that they look ‘inky’ and possibly even black in colour.

Iolite is quite popular and easily found. Finer pieces of iolite crystal can be tricky to find from time to time, but in general, these stones aren’t rare.

What is rare, however, is finding fine iolite stones weighing in at over five carats. Finding iolite over one carat in size with good clarity is even more challenging.

What Is The Spiritual Meaning Of Iolite? 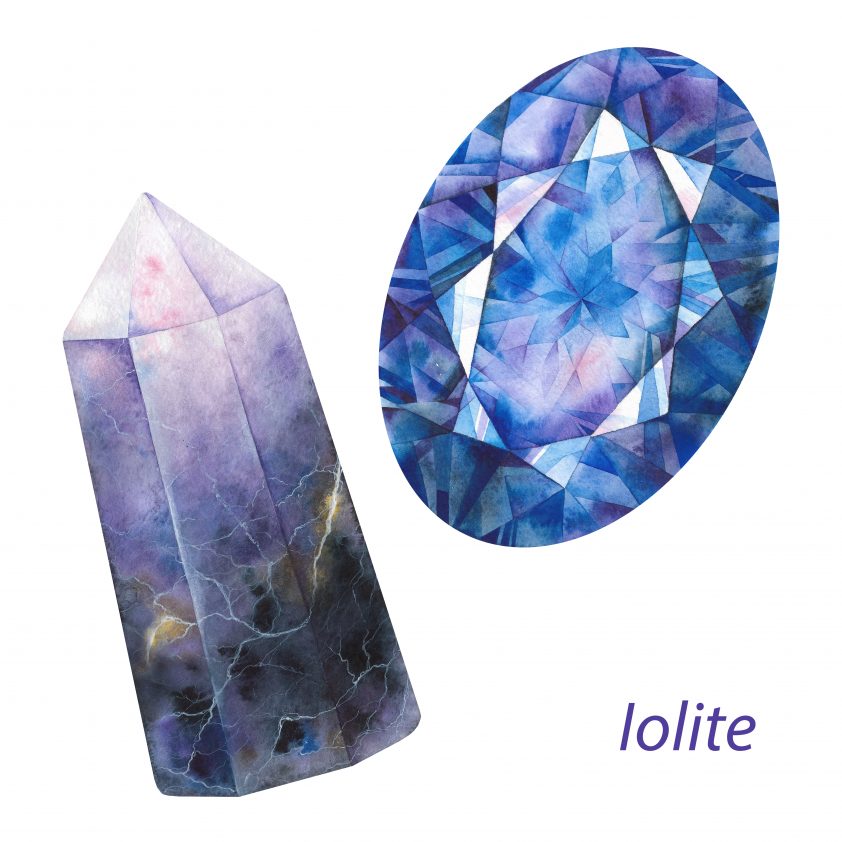 Spiritually, iolite meanings are rather significant.

The stone is known as the ‘Vikings’ Compass’ and carries the spirit of journey, dreams, intuition, exploration and illumination. Many people think of iolite as a guiding stone that helps you to move both physically and spiritually from one realm into another.

Iolite crystals are used to help recover a lost sense of balance. They are often recommended to those suffering from a feeling of disorientation or a lack of motivation. The stone strengthens our resolve to take on new responsibilities and carry them out properly. Plus, it provides us with a sense of self-assurance and endurance.

Iolite is also recommended to those who are lacking perspective and wish to bring order to a chaotic life or busy schedule through small, practical methods.

What Is Iolite Good For?

Iolite is great for boosting the immune system and supporting a strong constitution. It’s believed that iolite crystals assist in alcohol consumption, allowing its bearer to avoid the effects of overindulging. The stone is good for conditions of the liver and promotes detoxification by reducing fatty deposits in the body. Additionally, iolite is excellent for regulating digestion.

The healing properties of iolite are quite varied and expand to include the strengthening of nerves and a higher pain threshold. It stimulates memory and helps those suffering from insomnia enjoy better sleep, as well as prevent nightmares and any disturbances in sleeping patterns.

Iolite stones have been used to treat malaria and other ailments that induce fevers, as well as enhance the growth of your hair and nails. All in all, Iolite meanings are quite vast and encompassing.

What Chakra Is Iolite?

Iolite is both a third eye chakra and a throat chakra stone. It aids in opening your third eye and utilising its abilities. Often times, when your third eye is opened, you may initially battle with headaches, but iolite can be used to relieve these.

Because of the iolite stone’s connection to the third eye and throat chakras, it’s believed that the gems can help you see, imagine and allow yourself to fully experience things. With an iolite stone, your inner journey can be expanded, as can your intuitive gifts.

How Much Is Iolite Worth? 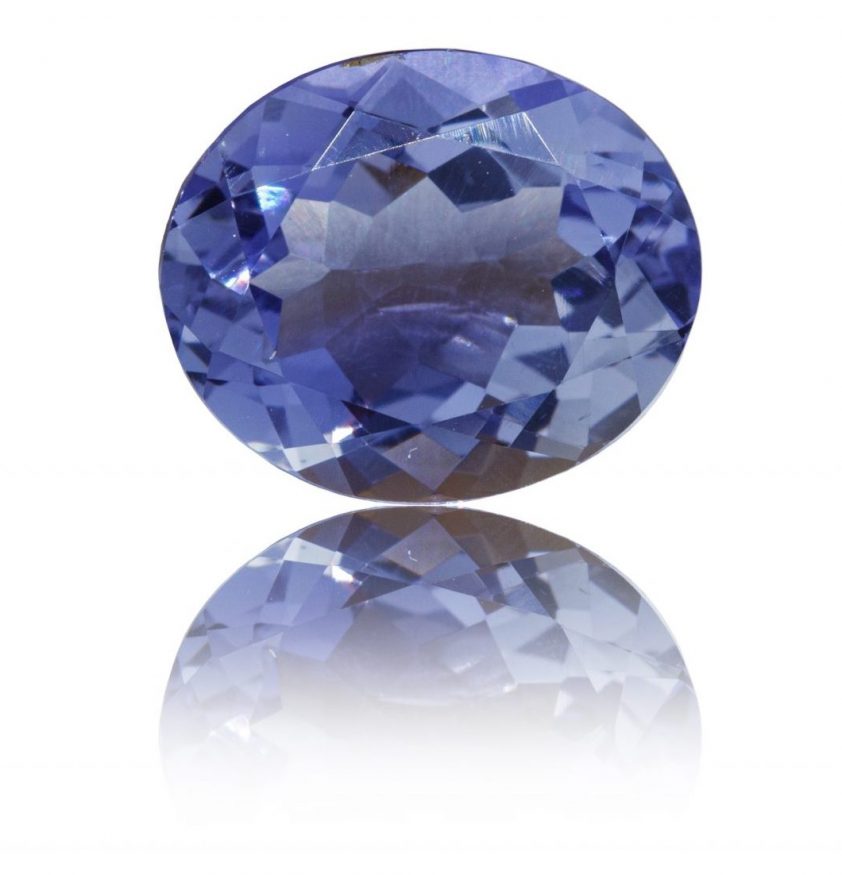 As mentioned above, iolite makes for a much more affordable darker blue stone than any of its counterparts.

Fine darker blue to violet iolite crystals weighing in between one and five carats can fetch between USD 60 and 80 per carat. For rarer stones that weigh in at between five and 10 carats, collectors can expect to pay anywhere between USD 100 to 150 per carat.

Is Iolite A Sapphire?

Iolite is not a sapphire. It’s a member of the cordierite mineral family. However, the gem is known as the ‘water sapphire’. It’s often claimed that because of the stone’s pleochroism, the Vikings used these gems to help them navigate the seas on cloudy days. The gem acted as a polarising filter and allowed ancient sailors to determine the approximate position of the sun.

Can Iolite Get Wet?

Despite its link to navigation of the seas, it’s not advised that iolite stones get wet. They can dissolve, crack or be otherwise damaged when exposed to water for too long. Instead, if iolite jewellery needs to be cleaned, warm soapy water should be used, and the stone immediately dried off thereafter.

How To Use Iolite

The benefits of iolite are best enjoyed when the stone is kept close to the body. It’s advised that iolite bearers wear the stone in a ring, pair of earrings or a bracelet. However, the most powerful placement for the stone is close to the mid-section of the body, so it could work well as a pendant on a necklace too.

Iolite crystals make for a truly fantastic addition to any collection of jewellery or gemstones. They have incredible healing powers. Plus, they make for an excellent, more affordable stone in jewellery pieces as they’re beautiful and have plenty of benefits attached.

Iolite is perfect for those who love darker blue stones but don’t necessarily have the budget to splurge on gems like sapphires. For other beautiful blue-coloured stones, check out this full List of Blue Gemstones.