Blog » Dining & Restaurants » Tea » Is Britain Taking Tea as it Should? Henrietta Lovell of The Rare Tea Co 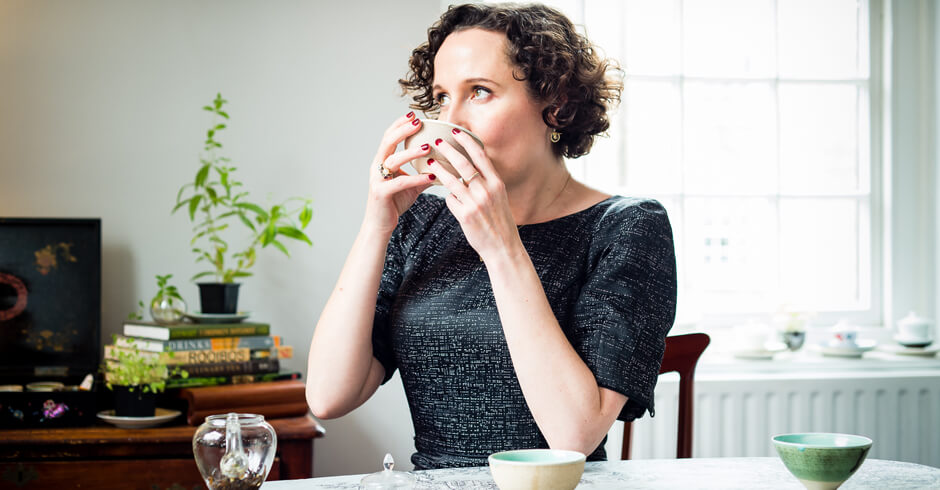 Britain really isn’t enjoying tea as much as much as it should. Despite being a national obsession – Brits get through 165 million ‘cuppas’ every day – that was my feeling after meeting with the country’s ‘Tea Lady’, Henrietta Lovell.

Lovell is the founder of Rare Tea Company. Naturally, she knows a thing or two about tea. She is now widely thought of as Britain’s foremost tea authority, in fact, who has taken on the fight to bring the best loose leaf tea back to restaurants and kitchens around the world.

“Back in the nineteenth century, British merchants travelled all around the world to find rare, special harvests and we [Britain] became the most famous tea drinking nation, after China. We had such a taste for tea, such a profound appreciation for the finest leaves,” she tells me.

In fact, it was the British who took tea gardens beyond China. “Britain stole the tea plant – Camellia Sinensis – from China and started growing tea in different countries”. That’s why India, Sri Lanka and many locations in Africa now have great tea pedigrees. After spreading tea far and wide, it was also the British who began combining different tea to make blends.

“That was a particularly British skill. In China, they very rarely blended tea and still don’t. But we began combining tea from very different terroirs and growing different varietals within the same terroirs. In much the same way wine is blended, we began to create new flavour profiles. It was the blending of black teas from different gardens to build deep, rich, complex flavour that became what we now know as English breakfast tea.”

Lovell explains that today most of the tea we consume comes from mass produced, industrialised tea bags. The multi-national companies who own the major tea bag brands place no emphasis on finding the finest harvests, instead focusing on reducing costs and high volumes. “English breakfast tea is now blended for bland uniformity and low price rather than to create something truly splendid.”

So, having had such a pedigree for tea, where did it all go wrong in Britain? “The Second World War,” Lovell tells me, without hesitation. “Tea had been extremely expensive when it was coming from China. It was really only the aristocracy who could afford it. But the taste for tea spread through the household. The precious leaves would be brewed over and over again – the butler and housekeeper getting the best infusions, before the tea was passed all the way down to the scullery maids. 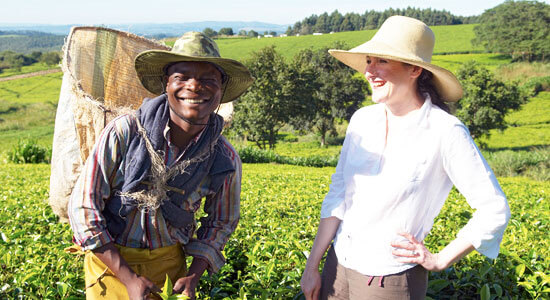 “When we [Britain] started producing tea ourselves the tax came down drastically and it became more accessible. Black tea travelled better and could be produced by machine, rather than just by hand, and so became more financially viable for more people and thus more popular. But tea was still extremely precious. People would buy the best they could possibly afford, rather as we do with wine and cheese today.

“It wasn’t until World War II, when supply became extremely precarious, that things changed. Knowing the nation would never get through a war without tea, the government took over supply. They didn’t buy beautiful harvests and they didn’t process it carefully – they needed tea as cheaply as possible. It was very bitter, very industrial and standardised. Tea was rationed well into the 1950s and we grew accustomed to this bitter brew.”

“The war generation were very good at stiff upper lip. The bog-standard, industrial tea that granny drank was good enough. Britain had forgotten its proud tea heritage and even that there was tea beyond the bag. It’s a bit like Italians thinking the only kind of coffee was instant or the French thinking wine only comes in a cardboard carton with a tap.

“But there is better. There is no rationing now. No U-boats circling. We have access to the finest tea in the world. We just have to pay a little more for the really good stuff.

Against this uninspiring backdrop, Lovell realised she had to take action. “I had been working for a global financial services company and the work took me to China. I learnt how to move things about the globe and deal with tough deadlines and even tougher characters. It was invaluable experience and I earned the money I needed to invest in Rare Tea Company. Although it was hard to leave a successful career, I never really loved my job or felt proud of what I did. Not as I do now.”

I ask her when she decided she was going to take what can only be deemed as a huge risk – devoting her life to fine tea. She explains the idea took its hold perhaps earlier than one might presume. “As a child I used to visit my great aunt’s house, in Scotland, and she had a silver tea trolley and a different tea set, with different china, for breakfast and afternoon tea.

“Tea was served in the drawing room at 4 o’clock. She had been brought up in India and would have her tea sent direct from tea gardens in Darjeeling every year. As a child, often when staying with relatives, we would be given some juice and sent into the garden while the adults drank tea. But not at my great-aunt’s. 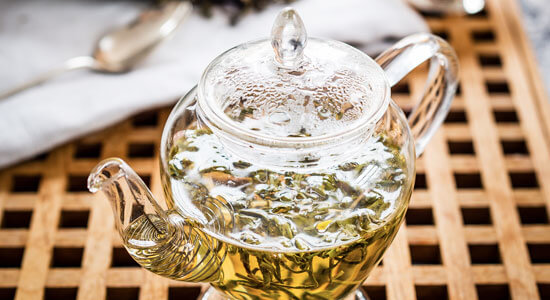 “There I would sit with my cup and saucer on the yellow sofa, drinking this extraordinary drink from fine bone china. It didn’t taste like anything I’d ever had before. It was floral and elegant and it made me feel like an adventurer as my aunt told stories of India and we drank this exotic treat.”

These memories lay dormant until Lovell travelled to Hong Kong. “I was in a harbour in Hong Kong and was served a tiny bowl of Oolong. As I tasted it, tea felt like an adventure again.”

It was at this point that Lovell went to prepare us our second pot of tea of the morning – an Oolong, of course. I learn how each different infusion of the tea leaves provides its own unique flavour. The leaves begin as very hard, small pellets, before eventually they turn into a pot full of leaves. “The water penetrates deep into the leaf to reveal different nuances,” she tells me. “But you have to stop the infusion each time. If you leave the leaf in water for too long, the tannins will overpower all the other flavours.”

Lovell tells me that short infusions are best, with a high leaf to water ratio. “The infusion starts as soon as you pour the water on. And then you pour all the water off and it stops. As you add fresh water you start a new infusion. Now the soft, sweet flavours will start dissolving, the water penetrating deeper into the leaf, each time to reveal something new. It’s important to take care of your precious leaves and not leave them stewing.”

As I indulge in the different flavours provided by each infusion, I begin to see what Lovell was talking about when she referenced the adventures her tea took her on. And soon I also learn which the best infusion is. “The first one is for your enemy,” Lovell tells me, “The second for your servants and third for your wife. The fourth infusion is for your mistress, fifth for your business partner – business is more important than pleasure – and the sixth, the best, you keep for yourself.”

Despite my intrigue, I remind Lovell she didn’t quite get round to finishing the story of how she came about setting up the Rare Tea Company. She takes another sip of Oolong, as if recalling that ‘eureka’ moment in Hong Kong. “As I drank the oolong I felt thrilled but also sad. Sad that we still have a great love of tea in Britain and yet this extraordinary tea in my hand, still being enjoyed around the world, we had no access to.”

Lovell set about finding out as much as she could about tea and the different terroirs and crafting. “Tea began in China, and that’s where I started. China was just starting to open up at this time and I was able to hire a driver and go up into the mountains and visit some of the tea farms I’d read about.

“I visited remote places where they still created tea by traditional methods. Where we now get our Rare Tea green tea from, it has been made in the same way for 3000 years. They were so shocked to see me get out of the car. 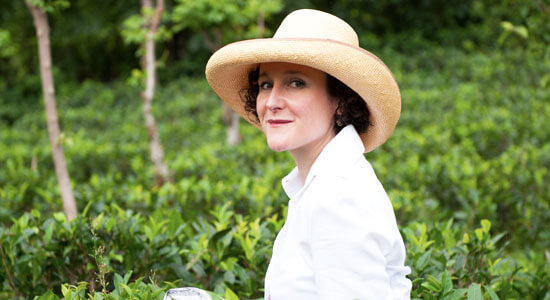 “I visited small villages where people brought the leaf to market and there were little family shops roasting and hand producing tiny amounts of tea. Buyers would come from Beijing to buy very small lots of handcrafted teas at huge values.”

This was when Lovell learned just how valuable tea was. “I realised that for hundreds of millions of people around the world, tea is still as precious as fine wines.” Lovell toyed for years with bringing back the traditions of really good leaf tea: creating a British tea company importing and blending the finest teas in the world as opposed to bland, bulk, industrial tea-bags that had swamped the market.

But it wasn’t just setting up a new business – it was a whole new market. “Ten years ago there just wasn’t a market for loose leaf tea. You could only get it in department stores and even there it was mostly poorly stored and fantastically expensive. It’s hard to imagine now but even the best hotels and restaurants used generic tea bags.”

Lovell finally took the plunge in 2004, yet the beginning of the business was hard. She had spent years researching and sourcing the finest leaves, travelling across the globe, from Nepal to Malawi, to bring back the best tea in Britain. But she was met with surprise. The tea didn’t come in a bag. How was that possible? Finally, it was chefs and sommeliers who championed her tea.

Katie Exton, sommelier at Chez Bruce, and Mark Hix were the first. “Sommeliers understand tea like wine and are excited by craftsmanship and the nuances of individual terroirs. Then came the chefs, excited by the flavours. When you consider that the last mouthful you might have in a restaurant would be tea, it really ought to be as delicious as all that came before.”

Now, the Rare Tea Company’s tea is served across the globe in the world’s best hotels and restaurants from Noma in Copenhagen to Momofuku in New York. From The Chateau Marmont in Los Angles to Claridge’s in London. Most recently, the Rare Tea Company signed up to provide extraordinary experiences with TRULY. Whether it be tea tasting, having your own bespoke blend made, or even chatting with Henrietta over afternoon tea at Claridge’s, Lovell is excited about the partnership: “It is a great joy to share my knowledge and expertise with TRULY’s clients.”

It is no mean feat to change a nation’s habits with something they are already so enamoured by. Yet Henrietta Lovell knows better than most that anything is possible.