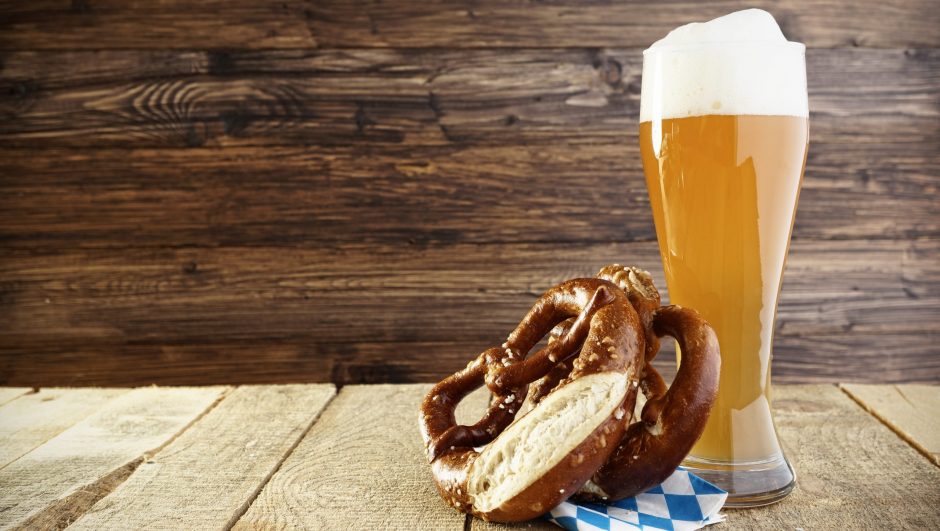 Hefeweizen beer’s hazy look and huge foamy head served in what looks like a flower vase glass may be intimidating for newbies. But true fans just cannot get enough of this German style of beer.

We aim to help newbies understand why Hefeweizen beer is not to be missed with its yeasty all-round taste that smells as good as freshly baked bread with interesting notes of spice, pepper and yes banana.

Hefe means “yeast” In German and weizen translates to “wheat.” These two ingredients typically define this style of ale. Yes, you read right, hefeweizen is an ale.

Pouring a cloudy, golden coloured brew with a thick foamy head from the wheat, hefeweizens also express iconic banana, clove, bubblegum, and even black pepper aromas and notes from the yeast.

With hefeweizens, the yeast is the thing. Many hefeweizens are brewed with more than 50% wheat. If that’s off-putting, bear with us and read on. As a whole, hefeweizens are an easy-drinking, refreshing beer.

Whether you’re drinking them on a hot day in the summer or around a bonfire in Autumn, hefeweizens are an under-rated style, but we aim to change that.

What Is The History Of Hefeweizen? 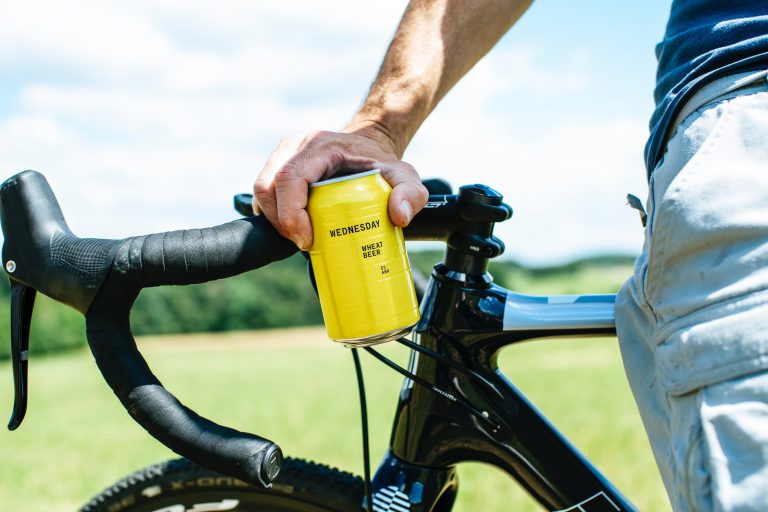 Hefeweizens’ history dates back hundreds of years in Germany. Originating in the 1520s in Bavaria, hefeweizens are a type of weissbier (“white beer”) also known as Weizenbier (“wheat beer”).

Their popularity grew, but by the late 18th century traditional dark lagers had over-shadowed the style in Germany. By 1812 only two breweries in Bavaria still made Weizenbier.

Luckily the style did prevail and today, G. Schneider & Sohn makes one of the most popular versions of wheat beer in the world along with German brewery Weihenstephaner, the oldest brewery in the world.

Brewed according to centuries-old traditions on the Weihenstephan hill, Hefeweissbier is an epitome of the German style, pouring golden-yellow with a large head of white foam, aromas of cloves, and a refreshing, full-bodied yeasty banana flavour.

In the 19th century, the hefeweizen style of brewing came to America with German immigrants. While it remained locally popular in pockets around North America, the craft beer explosion in 1980 saw brewers reevaluating the hefeweizen as they had fun with the style.

But from a craft perspective, it wasn’t until the 1980s that brewers really began playing with the style.

Hefeweizen are excellent beers to break up a fatigued palette from hoppy beers. But how is hefeweizen made and what makes it so special?

During the 1980s, most beer drinkers wanted crystal clear, filtered beer. In 1986, Widmer Brothers Brewing brewed its third-ever beer, the Widmer Hefe, the beer that started the hefeweizen style in the modern American craft beer movement.

Today, many modern craft brewers consider the house that hefe built or the Church of Wheat (as the Widmer Brothers team affectionately calls their brewery) as the originator of the American hefe style.

How Do They Make Hefeweizen Beer? 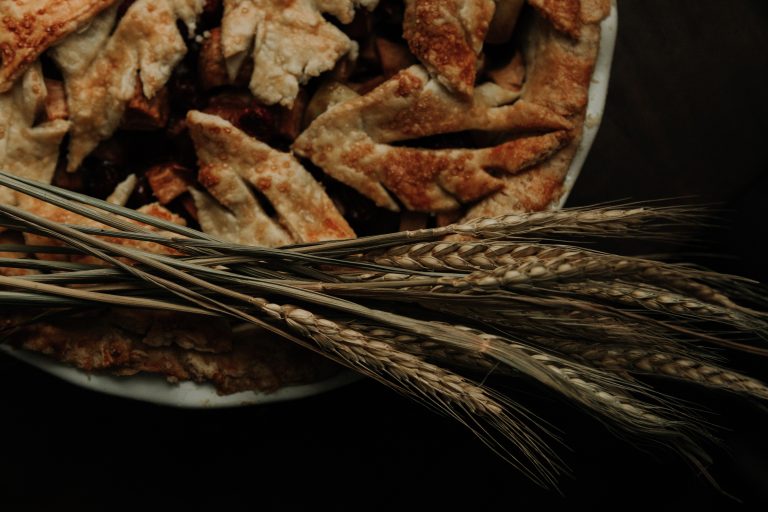 Simply put, wheat, wheat and more wheat. Featuring up to 50-65% wheat in the mash, hefeweizens use and build on protein-rich wheat to create a style-defining head of thick foam.

Altbier: The Top Reasons To Give This Dusseldorf Creation A Try

Many brewers use half wheat malt and half pilsner malt, which helps keep the beer pale in colour.

The true characteristic of a hefeweizen comes from a specific yeast strain that gives off bubblegum, banana, vanilla, clove, and even black pepper flavours and aromas.

Wheat adds a creamy texture, a hint of bright tanginess, and a dry palate, all making for refreshing — but somehow satisfying — beers.

What Are the Styles of hefeweizen?

While this is not turning into a German lesson, one has to know Wit and Weisse from Weizen. Wheat beers are a large family so it’s worth getting to know the main players.

The broad white beer family emerged in northern Europe around 1000 CE and was historically associated with hop trading centres like Hamburg and Nuremberg.

Wit means “white” in Dutch/Flemish and refers to Belgian-style wheat ale or witbier, known in French as bière blanche.

Weisse is the counterpart in German for “white,” most commonly used in reference to the sour Berliner type of beer, but also sometimes to the Bavarian type, as in weissbier.

Weizen is the German word for “wheat,” most often applied to the Bavarian wheat beer style.

Hefe simply means “yeast,” indicating an unfiltered beer served with its yeast, the most popular form of the Bavarian type.

Berliner Weisse is probably the oldest, last survivor of a family that included a number of sour, sometimes smoky beers such as gose, lichtenhainer, grätzer/grodziske, and others, centred around the far north of Germany and Poland (Prussia until the end of WWI).

Another ancient beer, witbier is centred around Leuven and Hoegaarden, in central Belgium. Once the everyday drink of the region, by 1960 it was a dead beer, but it was revived in the brand Hoegaarden. Witbier now has a following around the world.

The third classic wheat beer tradition is Bavarian hefeweizen, dating back to the 18th century with the royal family controlling the wheat supply. Gradually over time, wheat beer’s popularity faded by the early nineteenth century, and the rights were eventually returned to commoners. And hefeweizen is now a very popular beer.

The new kid in the wheat beer family, American hefeweizen is now very popular in the craft beer scene in North America. Hefe’s are simple to make, producing a golden, unfiltered wheat-based ale with a slight hoppiness. American hefeweizens differ from European wheat styles because they are fermented with a brewery’s all-purpose ale yeast rather than with a specialised wheat strain.

Let’s look at hefeweizen consumption around the world. Although it’s quite tricky to find reliable statistics on hefeweizen only, take a look at some of these staggering consumptions.

How Much Hefeweizen Beer Is Consumed Worldwide? Who Drinks The Most?

Europe consumes the most beer in the world in general. The country that tops the list is the Czech Republic, with 143.3 litres consumed per capita. Beer in the Czech Republic is cheaper than bottled water (typically US $1 for 500ml of beer), and the country is the birthplace of the pilsner.

Rauchbier - The Best Smoked Beer You Need To Try

The US is ranked 21st in the world.

Now we get to the fun part of how to drink hefeweizen, the taste and what foods to pair it with.

The German-style hefeweizen is straw to amber in colour and brewed with at least 50 % malted wheat. The aroma and flavour of a weissbier come largely from the yeast and is decidedly fruity (banana) and phenolic (clove).

Let’s talk about that banana and is there such a beer as a Bananaweizen?

Hefeweizen and Belgian yeast strains will produce very high levels of isoamyl acetate (a chemical that smells like bananas), which is why Hefeweizen beers have such a pronounced banana flavour and aroma, but American-style wheat beers do not.

And just why is hefeweizen traditionally served in a glass that looks like a flower vase. In fact, a hefeweizen glass is called a vase.

Before we get to the food pairing, here’s a list of 10 of the most popular hefeweizen from around the world. Take your pick, they are all good.

Now that we know our witbier from Berliner Weisse, just how does one pair food with this classic style of beer?

Remember that traditional German yeasts, which remain in the bottle and create hefeweizen’s hazy glow, help produce notes of spicy clove, banana and nutmeg. American Hefeweizens are usually subtler than their German counterparts and are frequently served with a squeeze of lemon.

Most Americans, however, do not drink hefeweizen with a squeeze of lemon.

Some typical pairings include:

What Is Gose? The Only Beer Guide You Need

Don’t forget to try a fruity hefeweizen with South Asian food such as Indian. Wheat beer is a perfect accompaniment with milder and yoghurt-based curries to really enhance the fruity flavours of the beer.

If you’re splurging, try a Lobster and Avocado Salad. Creamy and elegant, this recipe matches the smooth texture of the wheat beer, boosted with a splash of vinegar and citrus. Throw in segments of grapefruit, fresh beets, shallots and lots of avocados along with the lobster – yummy indeed.

We’re going to conclude by looking at some under-rated hefeweizen beers that should be on your radar. It’s not an easy task looking for under-rated wheat beers as the fans and aficionados all think every hefeweizen is top of the pops.

So we’re going to look for those that are under-the-radar beers and mess around with seasons between the hemispheres too.

Do try these off-the-beaten-track wheat beers. And if you’re the type to judge a beer by its packaging, many have kick-ass labelling or can designs, that scream try me!

To sum up, hefeweizen is a medium-light to medium-bodied hazy ale. It is never heavy. It’s the wheat’s texture that produces that beautiful head of creamy fullness.