Blog » Hobbies » Gardening » Flowers » Biennial Flowers » Growing Hollyhocks: When, Where & How to Plant Hollyhocks from Seed 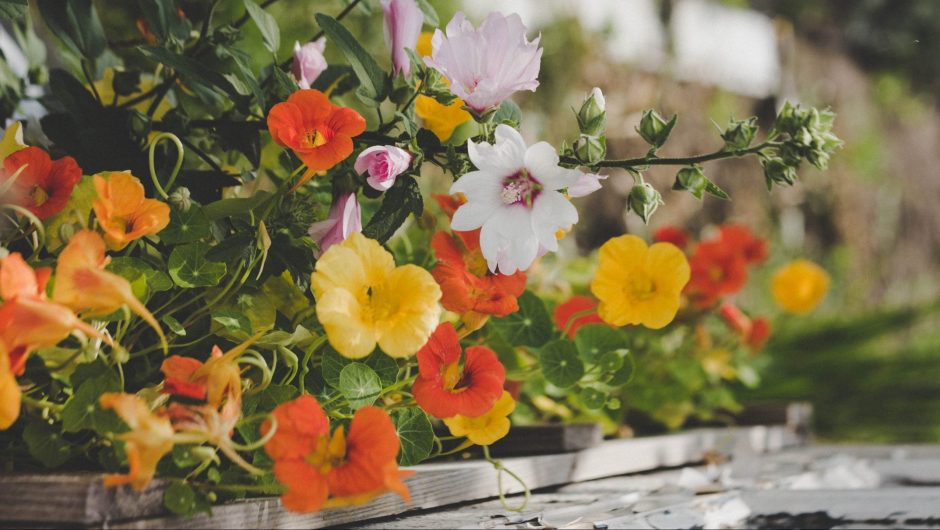 Hollyhocks are one of the prettiest flowers to add to a garden. They are bright yet dainty and make a real impact when planted amongst other flowers or greenery.

Hollyhocks are described as a “classic cottage garden staple” and bloom in the mid-summer months. Each tall spike boasts numerous colourful flowers that are sure to bring a bit of magic into any garden. 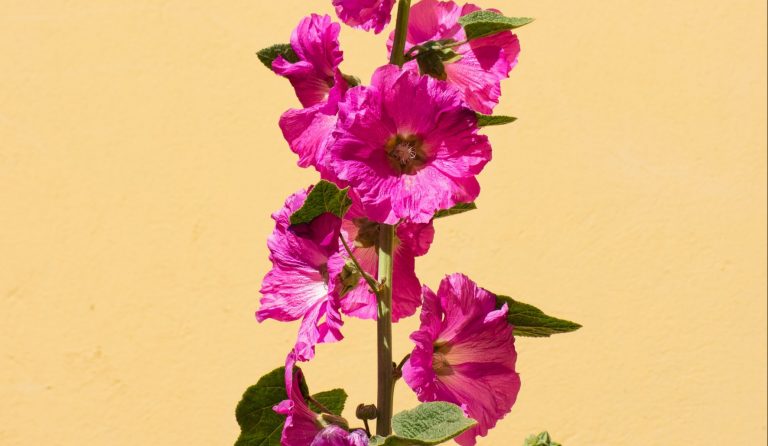 Hollyhock, also known as the Althea rosea, is a herbaceous plant of the hibiscus family. The flower is native to China but has been widely cultivated for its beautiful blooms.

There are several varieties of hollyhock, including annuals, biennials and perennials. Typically, hollyhock plants grow to just under three metres tall, with the gorgeous flowers nestling all along the stem. Every leaf has between five and seven lobes.

Hollyhock flowers typically bloom in white, pink, red or yellow. These flowers can reach sizes of about three inches across.

How to Grow Hollyhock 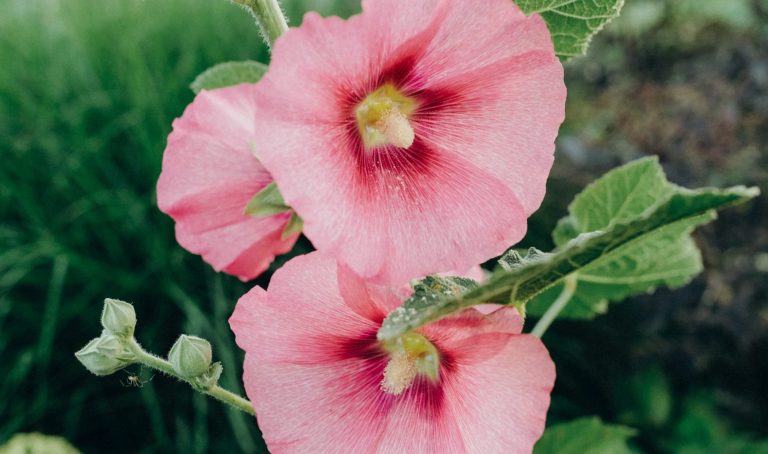 Hollyhock plants can be best established by considering the following factors:

When to Plant Hollyhock

Typically, hollyhock plants take about a year to grow from seed. You can plant hollyhock seeds in the later months of summer to enjoy blooms the following summer. Alternatively, you can wait until late in winter or early in spring if you plan to start any transplants indoors.

Where to Plant Hollyhock

The best place to plant hollyhocks is in a well-draining area that enjoys full sun to partial shade. However, because hollyhock plants typically grow to be quite high, they need to be protected from damaging winds through support such as a trellis, wall or fence. Also keep in mind the fact that hollyhocks readily self-seed, so try to plant them somewhere that this won’t be an issue.

How to Plant Hollyhock

Hollyhocks can easily grow from seeds, whether you plan on growing them inside or out. Plant your seeds outdoors about a week before the last frost and be sure to sow them about a quarter-inch deep and about two feet apart. Hollyhocks have long taproots, so if you start them indoors, be sure to use tall, individual pots and transplant the bulbs early to avoid any damage.

How to Care for Hollyhocks 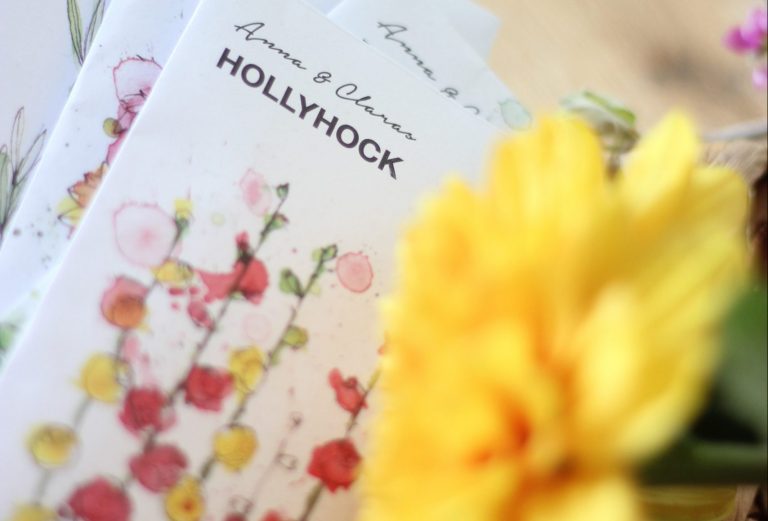 Caring for hollyhocks can be fairly simple, but they need to be monitored as they can spread quite quickly once established.

Hollyhocks should be planted in rich, well-draining soil. For starting hollyhocks, ensure that the plants are regularly watered, and the soil remains moist. However, once they are well on their way to growing, these plants can be resistant to drought. Keep watering them from below to avoid wetting the foliage, as this could lead to diseased leaves.

When it comes to pruning, you can remove hollyhock flowers as soon as they start to fade, and their stalks cut back after flowering. This will help prevent seed heads from forming and reseeding. If you would like to have seed sets for the following year, leave the flowers as they are until the seeds have dropped. After winter, remove all stems and leaves to prevent rust disease.

Also see  What Is the Meaning of Morning Glory Flowers? Symbolism & Fun Facts

Do hollyhocks come back every year?

Most hollyhocks will come back every year as they are self-seeding perennials. However, depending on the variety of hollyhock, this may change. Some hollyhocks are biennials, which means that their entire lifecycle will be complete within a two-year cycle. Other hollyhock plants are annuals, which means they will only flower once.

How long do hollyhocks take to grow?

From seed, most hollyhocks will see seedlings emerge within 12 to 21 days.

Do hollyhocks need sun or shade?

To create the best environment for hollyhock flowers to grow, the plants need full sunlight and well-drained soil.

Hollyhocks normally grow as biennials or short-lived perennials. As a result, they are usually allowed to self-sow to replenish their patch. As with almost every plant that self-sows, hollyhocks can multiply.

Try to plant them somewhere with plenty of space, but keep in mind that these plants can also grow to be quite big. If you commit to having them, you will likely spend more time containing and controlling them than encouraging them to grow.

Do you deadhead hollyhocks?

Can I plant hollyhocks in pots?

It is not advised that you plant most varieties of hollyhocks in pots as they can grow to be rather large and may become too restricted within a confined space. However, there are certain hybrids of hollyhock that are miniature. These are best suited for pots as they will remain smaller and can be better managed in containers.

Are hollyhocks poisonous to dogs?

Hollyhocks are not considered to be poisonous if dogs ingest them. However, touching them can cause dermatitis in both pets and people. These plants can trigger contact dermatitis or allergic dermatitis, both of which can result in irritation of the skin or mouth. If you suspect your dog has wandered through hollyhocks or perhaps ingested some, bathe your dog with a gentle shampoo and rinse its mouth with water.

How To Winterize Hollyhocks

Pruning your hollyhocks is the first step to winterizing the plant. Prune the leaves back by about 15 centimetres from the ground in autumn. Then, be sure to add a layer of organic material over the roots to protect them from freezing. You can do this using straw, leaf litter, compost or mulch. Coat the base of the plant in about 10 centimetres of this.

When spring begins, gradually start pulling layers away so as to help the plant roots acclimate to the changing seasons. Once new growth starts to emerge, remove all of the material to create space for the fresh leaves and stems. Feed the new growth with a granular food and keep the mulch on hand in case of a spring freeze. Should a freeze approach, cover the roots and shoots immediately to keep them protected and remove the mulch again once the danger of the frost has passed.

There you have it! Growing and looking after hollyhocks is a straightforward affair, and the results speak for themselves.