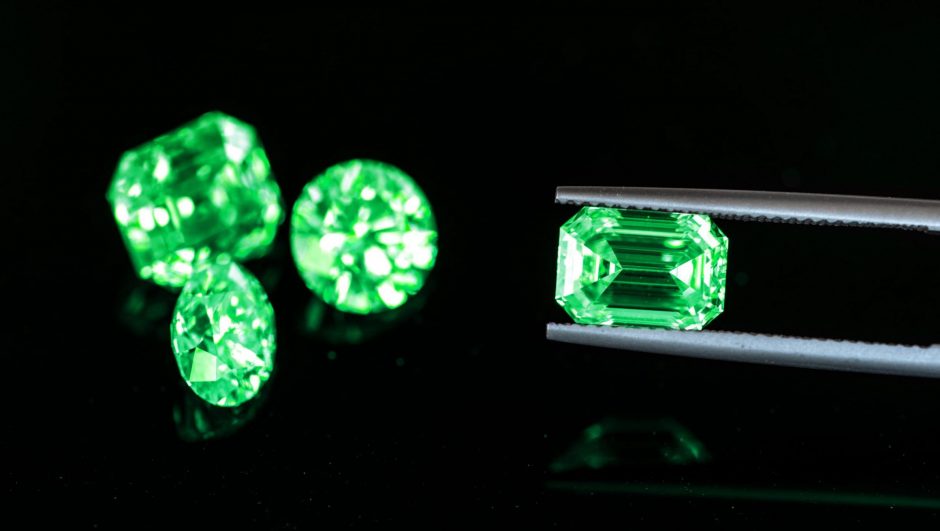 Green has always been a fascinating colour. People all over the world love it for numerous reasons. For one, it represents sophistication and elegance. Secondly, green symbolises life and renewal. It’s also attached to a feeling of fresh energy and reminds us of nature. When it comes to the psychology of the colour, many find it to be incredibly soothing, as the brain associates the colour with being outdoors.

Over and above all of that, green represents the biggest number of choices of coloured gemstones. Furthermore, certain green gemstones rank amongst the top rarest and expensive stones that one can add to their collection.

While not all stones are formed in the same way, it’s thought that green gemstones are so coloured due to traces of chromium, vanadium or iron being present while forming.

While most of us are all naturally drawn to green, there also happens to be over 100 different kinds of green gemstones. All of them range in shades, price and features. Let’s take a closer look at some of the most popular stones that glitter in green. 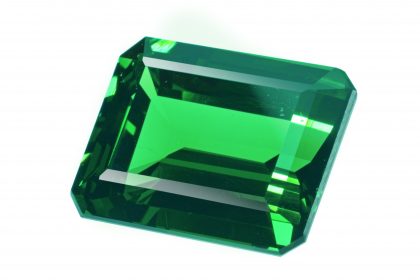 Of all the precious green gemstones, emeralds are undoubtedly the most popular. They’ve been used for centuries already, with the famed Egyptian Queen Cleopatra well-known for wearing them. Emeralds were also often used in burial rituals in Egypt, as mummies have been found entombed with emeralds for them to take into the afterlife.

Emeralds are a member of the beryl family of gemstones. Like many other precious stones, the biggest factor that can affect the value of an emerald is the depth of its colour. The more intense and the more vivid the colour of the stone, the more valuable it will be. However, almost every emerald contains some kind of inclusions, most of which can be likened to moss-like threads. These are named ‘jardin’, after the French word for garden. Finding a clean-cut emerald without any inclusions is incredibly rare.

It’s not uncommon for emeralds to be treated and fractures filled to deepen the colour and increase the stability of the stone. Because of the inclusions, the stone can often be weakened, making it vulnerable to chips and cracks. As a result, jewellers don’t advise that emeralds be used in jewellery that requires high durability, such as rings. Instead, opting for emeralds in earrings or necklaces is encouraged.

Historically, Ancient Romans and Greeks dedicated emerald to Venus, the goddess of love. They believed it would protect lovers from unfaithfulness. Drawing from these ancient beliefs, today emerald is seen as a symbol of eternal love, making it a popular choice for engagement and wedding rings.

In terms of healing properties, emeralds are known to heal emotion love and the physical heart. 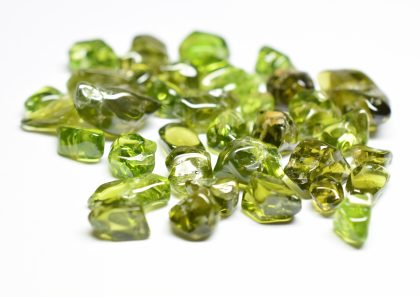 Peridots are fascinating gemstones because they’re formed in the most unique ways. They have been known to fall from the sky!

Peridots are formed in volcanoes, and when one erupts, it can shoot peridots high up into the air before they fall to the ground. Hawaii has one of the world’s biggest supplies of peridot, owing to the volcanic lava that almost constantly flows around the island

Other peridots have even come from outer space and were discovered in Pallasite meteorites.

The largest peridot stone ever found was on Zagbargad Island in Egypt. It weighed in at 311.78 carats, or 62.35 grams. The peridot has since been moved to the USA’s Smithsonian Museum. Another notable peridot stone is kept in Moscow, Russia at the Diamond Treasury. This beauty weighs in at 192.75 carats. Rounding off the world’s biggest peridot stones is London’s Geological Museum, where a 146-carat peridot is proudly kept.

Peridots can range in colour, and just like emeralds, are more valuable based on the depth of how green they are. However, peridots with yellow tinges are also commonly found. Despite the incredible way that they are formed, peridots are quite an affordable gemstone. However, this could be because they’re not very durable and need to be cared for with much caution. Peridots are incredibly sensitive to acid and rapid temperature changes too.

Ancient Egyptians called peridots ‘the gem of the sun’ and believed that the gemstone had mystical healing powers. Ancient Romans also valued the dazzling green stone, nicknaming it the “emerald of the evening” because its shine stays in the same in any light. Peridots are said to bring good health, restful sleep and peacefulness. It’s also associated with compassion, opening your heart to new relationships. 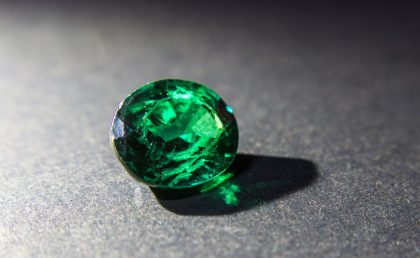 While sapphires are best known for being blue, like several other gemstones, they come in a variety of colours, including green. Green stones very rarely reach full saturation of colours, but sapphires do, and are amongst the world’s most durable gemstones. This is why sapphires, both blue and green, are often used in jewellery that’s prone to being bumped, such as rings.

The colour spectrum of green sapphires is quite varied. They can be found in naturally occurring hues that include mint green, olive green and yellow green. As is the case with almost every gemstone, a pure, grass green is much harder to find. However, owing to the fact that pure blue sapphires are more highly sought after, the green ones are more affordable.

Your Guide to Purple Gemstones - List of Names, Meanings & Pictures

In some cultures, it’s believed that green sapphires correspond to the heart chakra, which influences prosperity and nature. They are often used to bring about good luck, particularly in terms of money and a sense of abundance. Another belief is that green sapphires can help heal a broken heart, or even help you find true love!

In the Middle Ages, sapphires were believed to be able to protect loved ones from harm and represented a sense of loyalty and trust. 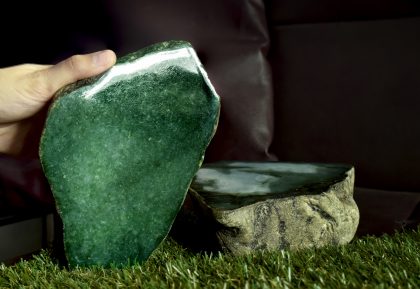 Another incredibly popular green gemstone is jade. Prized and held in high esteem in certain parts of Asia, it’s believed that the stone was used as far back as 7000 years ago in China.

Jade comes in two different varieties. The first is jadeite, which is considered to be more valuable and of a higher quality. Jadeite is most commonly used in fine jewellery. On the other hand, there is the nephrite variation of jade. While lower in cost, nephrite can be found in much larger quantities. Nephrite jade is often used to carve beautiful sculptures, statues and fountains.

While jade can be considered a fairly soft stone, it’s also very tough due to how compact its composition is. In fact, it’s so tough that it cannot be broken with a hammer. Most jade is cut into cabochons or other smooth cuts or is carved. While uncommon, some gemologists prefer to facet jade as it can give the stone an added brilliance.

One thing to note that makes jade even more different from other gemstones is that when heavily treated, it has very low durability. This is usually a trait of poor quality of gems, but in jade’s case, it’s due to the stone’s composition and has no bearing on the quality thereof.

Jade is widely considered to be a symbol of purity and tranquillity. As a protective stone, it keeps the wearer away from harm and is believed to bring luck, peace, friendship and harmony. Interestingly, jade is known for its musical properties. When struck, it rings just like a bell.

Fun fact: Due to the high cost of jade, another stone named maw sit sit is often used instead. This green stone boasts fairly bright hues due to trace levels of chromium and often has black inclusions. It looks very similar to jade and contains a bit of jadeite. Maw sit sit is often available at just a fraction of the price of jade, making it an excellent alternative. 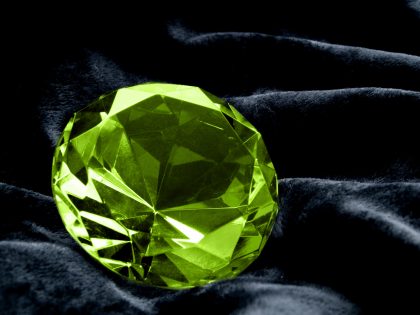 It’s no secret that these stones are highly sought after. They come in a variety of colours, including green. Coloured diamonds are rare, as their colours are determined by the chemicals present during their formation.

Green is one of the rarest colours of natural diamonds. The colour is a result of hydrogen, nitrogen and nickel in the diamond’s crystal structure. Green diamonds can also be formed from defects in the gem’s structure caused by irradiation as the diamond forms underground.

As a means of making green diamonds more affordable, irradiation treatments are becoming more popular. Because naturally green diamonds are so rare, jewellers have taken to the treatment as a means to create greater depth and colour in a lab. These lessen the prices significantly and make for a jewel that is just as beautiful as a natural one would be.

Green diamonds are a symbol of the qualities associated with the colour green – abundance, prosperity and success. Its healing properties include relaxation, peace and growth. They are seen as a sign of new beginnings, and are a great choice for those looking for a valuable gemstone associated with nature. The ancient Greeks and Romans believed that diamonds could have been tears cried by the Gods or splinters from falling stars.

With so many gorgeous green gemstones to choose from it can be hard to decide which ones you want to wear. Of course, you could always just try them all!