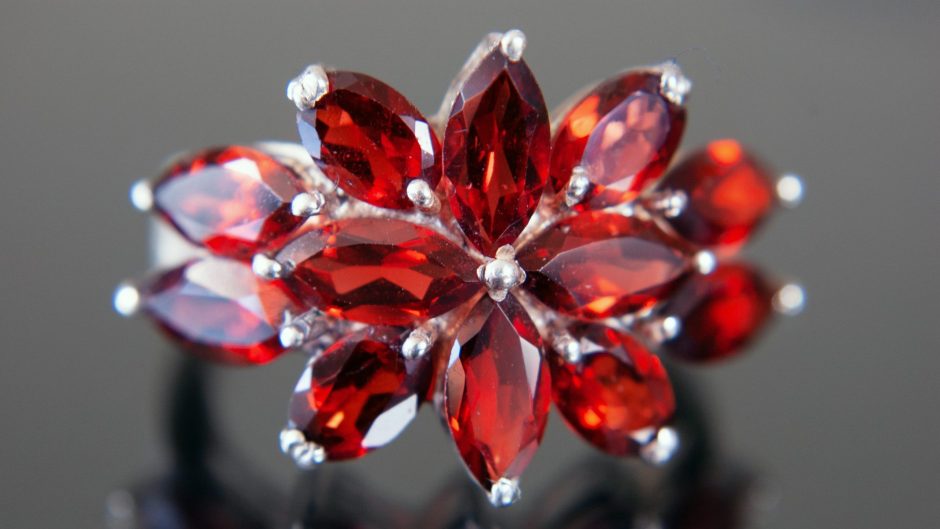 A glittering stone that’s incredibly popular, garnet is one of the more common gems on the market. However, common doesn’t mean boring, as you’re about to find out!

Garnet is the collective name for a group of minerals. This varied mineral group makes the stone diverse and contributes to the wide range of red and orange colours. These stones have been around for over 5000 years, so they’ve certainly stood the test of time. They’re commonly used in jewellery and are often confused with rubies.

Where Are Garnet Stones Found? 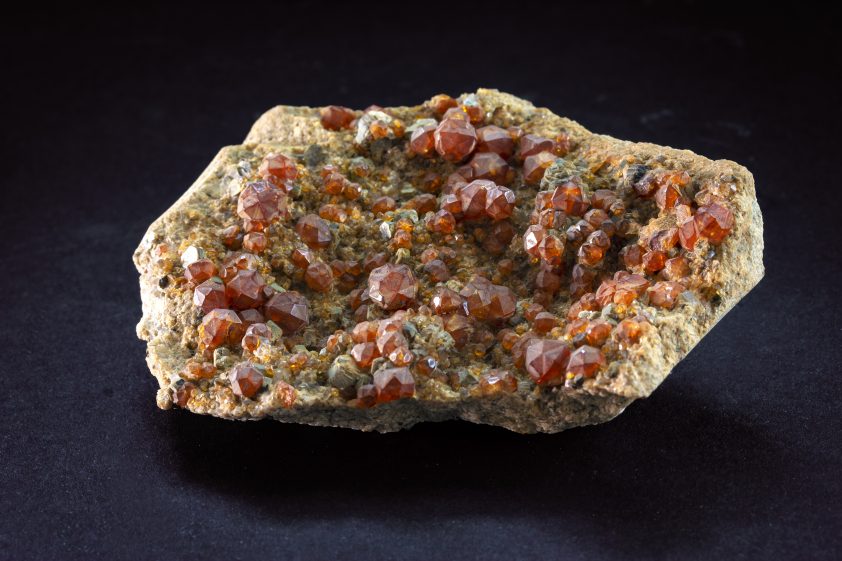 Due to its abundance and availability worldwide, garnet stone come in many forms and varieties. Currently, most of these gems come from the USA, India, Sri Lanka and Brazil, but they have been mined on almost every continent in the past.

How Much Is A Garnet Stone Worth?

When determining the value of any gem, there are several factors you need to consider. Garnet stone prices are influenced by:

Because they are available in so many different colours, garnet stone prices can vary dramatically. They tend to range from around $500 a carat with inclusions, up to around $7000 per carat for the larger, clean stones. The most valuable garnet is Demantoid and it’s priced near the top of the spectrum.

How Is A Garnet Stone Formed?

Garnet refers to a group of minerals including:

You can find them in sedimentary, igneous and metamorphic rocks and in magma chambers, volcanic eruptions and lava flow. It’s also present in the soil formed when rocks bearing garnet break down.

What Are The Properties Of Garnet? 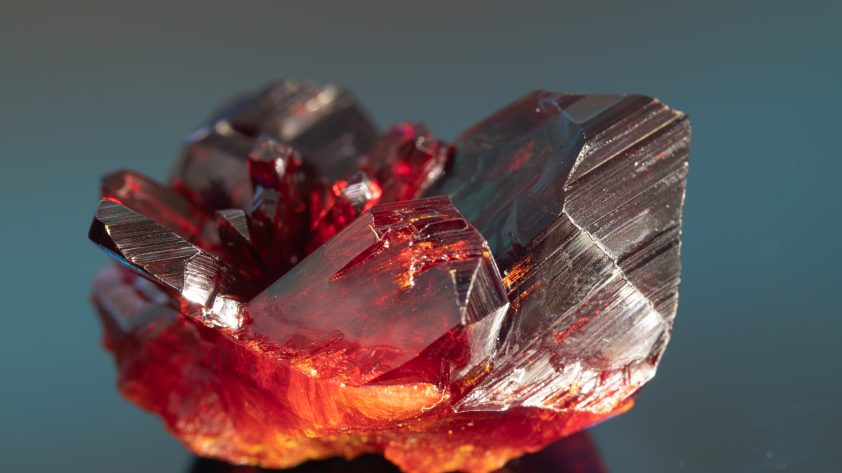 The garnet is famous for its glossy glow and wide variety of colours. It’s most often found with red colouring, although it can be green or brown too. When you hold one of the stones against the light, yellow and green bands are visible This is the easiest way to identify whether or not a stone is a garnet.

What Is The Meaning Of Garnet Stone?

This gem is a symbol of love and is often associated with life force, blood, heart and inner fire.

What Does Garnet Mean Spiritually?

What Chakra Is Garnet Associated With?

Red garnet stones are associated with the heart chakra. It’s more intense than other love related stones, for example, rose quartz or jade. If you’re looking to attract love and positivity, include this stone in your life.

Who Can Wear Garnet Stone?

People who have low energy levels will benefit from wearing this stone. The gem is effective in attracting positive things in life and can help you practice manifestation. If you’re looking to make a change in life, the garnet stone can assist you in manifesting this change.

Garnet also provides luck in all aspects of life and promotes self-love. This ensures that you live a happy, well-balanced life.

How Can You Tell If A Garnet Is Real? 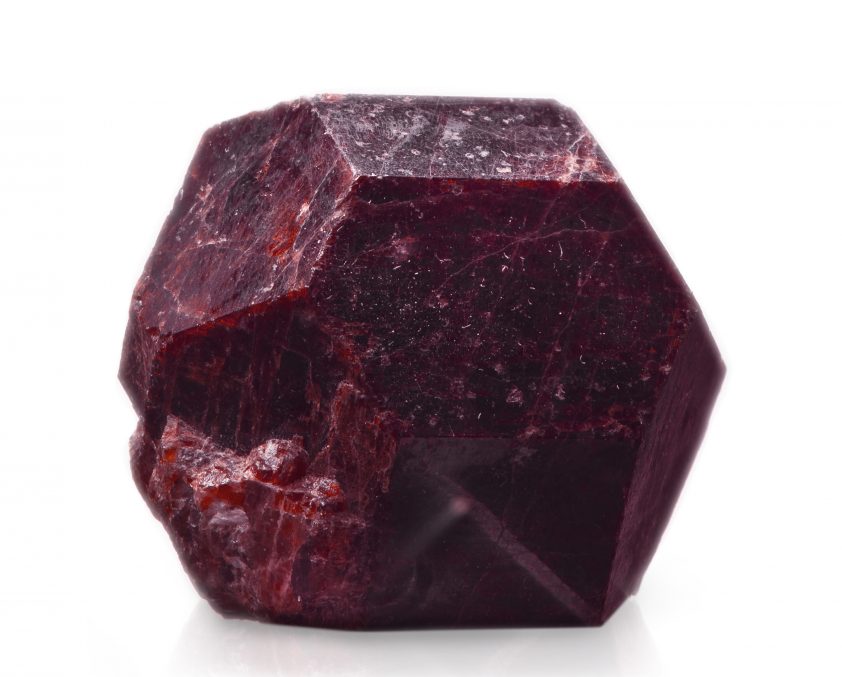 Synthetic garnets are carefully designed and created in a lab setting. This ensures that their natural and chemical qualities are in line with that of the original. As a result, these stones are often too perfect, making them easy to identify. While they may be blemish-free, they’ll lack the characteristics that make them so unique.

Artificial garnets will melt or have their colour fade when exposed to boiling water.

While the condition of the stone will determine its value, don’t be fooled into buying a perfect specimen. They’re often artificial and have a lower value. Natural stones will have imperfections. It’s one of the elements that make them so unique and easy to identify.

Are Garnet And Ruby The Same?

While garnets appear red and are often mistaken for a ruby, there are easy ways to tell the two apart. The garnet is a darker, denser red with hues of earthy tones. The two stones also offer different points of reflection.

The ruby is a harder, more durable stone. They’re a more vibrant red with hues of blue and purple. It’s more expensive than a garnet, which makes knowing the difference important.

An easy way to tell the difference is to hold the stone up to a light source. If you see green and yellow bands, it’s a garnet. The ruby absorbs those colours and as a result, they won’t be visible when held to the light.

Related Reading: How Much Are Rubies Worth? 7 Fascinating Facts About Ruby Gemstones

Garnet As The January Birthstone

The beautifully diverse garnet stone is both the traditional and modern January birthstone. It’s seen as a symbol of trust, friendship and love. The extraordinary array of garnet stone colours makes it a great choice for jewellery as there’s sure to be a hue that suits everyone born in this month.

Where To Buy Garnet Stone?

There are plenty of places to buy Garnet Stone online. From specialty online shops to online giants like Amazon.

Garnet stones form when a sedimentary rock rich in aluminium experiences heat and intense pressure. This often takes place in volcanic environments and gives the stone its unique colour.

The way they form also contributes to their hardiness, which is part of what makes them such an excellent choice for jewellery. They’re not prone to chipping easily and their vibrant colours make them stand out beautifully.

Garnet stone benefits and their beauty make them an excellent choice for anyone who loves a little fire or flair in their lives.

Find out about other red stones in the List of Red Gemstones.