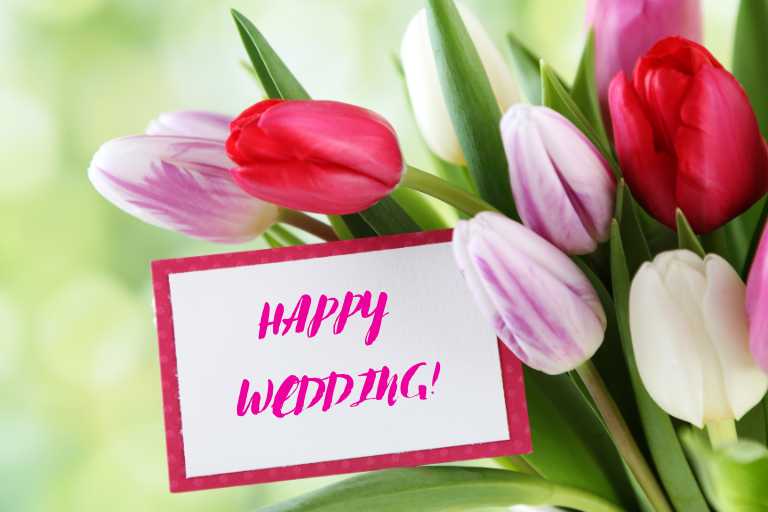 Sometimes, a sweet or sentimental message just isn’t right for a wedding card, when that’s the case, the chances are, a funny marriage quotes are more the newlywed’s style.

If you want to make the newlyweds roar with laughter, these 65 funny wedding quotes are an excellent place to start.

“Marriage is really tough because you have to deal with feelings … and lawyers.” – Richard Pryor

“Marriage is not just spiritual communion; it is also remembering to take out the trash.” – Dr. Joyce Brothers

”A good marriage would be between a blind wife and a deaf husband.” – Michel de Montaigne

“Marriage is the bond between a person who never remembers anniversaries and another who never forgets them.” – Ogden Nash

“A man is incomplete until he is married. After that, he is finished.” – Zsa Zsa Gabor

“I think men who have a pierced ear are better prepared for marriage. They’ve experienced pain and bought jewellery.” – Rita Rudner

“The best way to remember your wife’s birthday is to forget it once.” – Ogden Nash

“All marriages are happy. It’s the living together afterwards that causes all the trouble.” – Raymond Hull

“Music played at weddings always reminds me of the music played for soldiers before they go into battle.” – Heinrich Heine

“My prince is not coming on a white horse … He’s obviously riding a turtle, and definitely lost.” – Unknown

“I am” is reportedly the shortest sentence in the English language. Could it be that “I do” is the longest sentence?” – George Carlin

“Always get married early in the morning. That way, if it doesn’t work out, you haven’t wasted a whole day.” – Mickey Rooney

“In olden times, sacrifices were made at the altar, a practice that still continues.” – Helen Rowland

“My wife and I were happy for twenty years. Then we met.” – Rodney Dangerfield

“All my friends are getting married. I guess I’m just at that age where people give up.” – Amy Schumer

“Marriage is like a phone call in the night: first the ring, and then you wake up.” – Evelyn Hendrickson

“The most important four words for a successful marriage: “I’ll do the dishes.” – Anonymous

“Marriage is an adventure, like going to war.” – G. K. Chesterton

“Before you marry a person you should first make them use a computer with slow Internet to see who they really are.” – Will Ferrell

“Marriage is like a deck of cards. All you need in the beginning is two hearts and a diamond. After 10 years you need a club and spade.” – Carrie Underwood

“Before I got married I had six theories about raising children; now, I have six children and no theories.” – John Wilmot

“I’m going to get married again because I’m more mature now, and I need some kitchen stuff.” – Wendy Liebman

“When a girl marries she exchanges the attentions of many men for the inattention of one.” – Helen Rowland

“Marriage: A legal or religious ceremony by which two persons of the opposite sex solemnly agree to harass and spy on each other for ninety-nine years, or until death do them join.” – Elbert Hubbard

“More marriages might survive if the partners realised that sometimes the better comes after the worse.” – Doug Larson

“Marriage is getting to have a sleepover with your best friend, every single night of the week.” – Christie Cook

“One of the keys to a successful marriage is separate bathrooms. When he enters my bathroom sometimes I’m like, ‘Why are you in here?’ And he’s like, ‘I live here. Can I enjoy my bathroom too?’” —Michelle Obama

“Husband secretly lowers the thermostat and I secretly turn it back up. We both vehemently deny touching it. Marriage is fun.” —Stephanie Ortiz

“Remember that creating a successful marriage is like farming: you have to start over again every morning.” —H. Jackson Brown, Jr

“I love being married. It’s so great to find that one special person you want to annoy for the rest of your life.” —Rita Rudner

“You know there is a name for people who are always wrong about everything all the time… Husband!” —Bill Maher

“I am a very committed wife. And I should be committed, too—for being married so many times.” —Elizabeth Taylor

“Who won in life? Me. Because I got to marry you.” — Chip Gaines

“When a man opens a car door for his wife, it’s either a new car or a new wife.” — Prince Philip

50 Best Wedding Thank You Messages From The Bride and Groom

“A man’s main job is to protect his woman from her desire to ‘get bangs’ every other month.” — Dax Shepard

“Spend a few minutes a day really listening to your spouse. No matter how stupid his problems sound to you.” — Megan Mullally

“Make sure you have date night even if it’s once in a blue moon because most of the time you’re just too tired and you’d actually prefer to sleep.” — Chris Hemsworth

“I married for love, but the obvious side benefit of having someone around to find my glasses cannot be ignored.” — Cameron Esposito

“I don’t want to hear about the endless struggles to keep sex exciting or the work it takes to plan a date night. I want to hear that you guys watch every episode of The Bachelorette together in secret shame or that one got the other hooked on Breaking Bad, and if either watches it without the other, they’re dead meat.” ― Mindy Kaling

“We just like each other. You start there. … I still can’t believe my wife goes out with me. If we were in high school and I was just funny, I’d never have the courage to talk to her.” —Tom Hanks

“Love, gratitude, compassion, because sometimes every man or every woman will drive their partner crazy.” — Goldie Hawn

“Marriage is like a graph — it has its ups and downs, and as long as things bounce back up again, you’ve got a good marriage. If it heads straight down, then you’ve got some problems!” — Dame Julie Andrews

“A man doesn’t know what happiness is until he’s married. By then it’s too late.” — Frank Sinatra

“Our marriage was the most difficult, gruelling, excruciating thing that we have ever taken on in our lives. And you know, we’re just not quitters.” — Will Smith

“I’m just a diaper-changing facility hooked up to a life-support system, but my wife, she’s breakfast, lunch, and dinner. She’s a human Denny’s all day long … and it never ends for her. She’s the most beautiful Denny’s you’ve ever seen though, I guarantee it.” — Ryan Reynolds

50+ Of The Best Christian Wedding Wishes

“Because I always say, if you’re married for 50 years, and 10 of them are horrible, you’re doing really good!” — Michelle Obama

“We have a couple of rules in our relationship. The first rule is that I make her feel like she’s getting everything. The second rule is that I actually do let her have her way in everything. And, so far, it’s working.” — Justin Timberlake

“I’d like to publicly thank my husband [Dax Shepard] for changing half the diapers in our house. I hope he changes all of mine one day…” — Kristen Bell

“Being a good husband is like being a standup comic. You need 10 years before you can call yourself a beginner.” — Jerry Seinfeld

“After about 15 years I finally figured out that she’s always right. So surprisingly we just stopped fighting after that.” — Barack Obama

“The best way to get most husbands to do something is to suggest that perhaps they’re too old to do it.” — Anne Bancroft

“My wife and I have been married for 21 years, and without a doubt, the hardest times we’ve faced were those times when we hated each other.” — Andy Richter

“My wife didn’t take my name, which isn’t weird, but what’s weird is when people think it’s weird, like we’re on a first-name basis anyway.” — Mark Agee

“There are only three things women need in life: food, water, and compliments.” — Chris Rock

“My most brilliant achievement was my ability to persuade my wife to marry me.” —Winston Churchill

“Michelle’s like Beyoncé in that song, ‘Let me upgrade ya!’ She upgraded me.” —Barack Obama

“Only married people can understand how you can be miserable and happy at the same time.” — Chris Rock

“Just found out the wife is writing a book about our honeymoon, called 50 Shades of Just O.K.” — Conan O’Brien

Had a laugh? Any of these funny marriage quotes are sure to make the newlyweds chuckle too!